Getting off the bus

Neither the major parties nor the media coped well with the seventeen days of uncertainty after the election. Peter Clarke talks to Sophie Black and Brian Costar about how they need to change 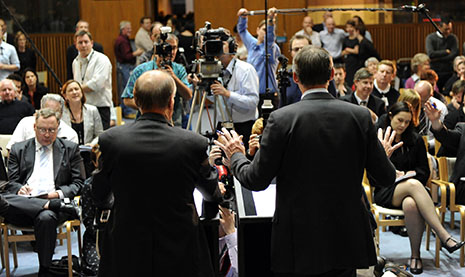 Even before election day the signs were that the news media were struggling to interpret national politics in a way that captured the interest of readers and viewers and enhanced the democratic process. Meanwhile, neither of the major parties was making a convincing pitch for a majority of votes. But it was the hung parliament that threw the spotlight most brightly on the shortcomings of the political and media establishment, raising important questions about how politics and policy are practised and reported in this country.

In this podcast Peter Clarke talks to political scientist Brian Costar and Crikey editor Sophie Black about what happened and where we might be heading from here.