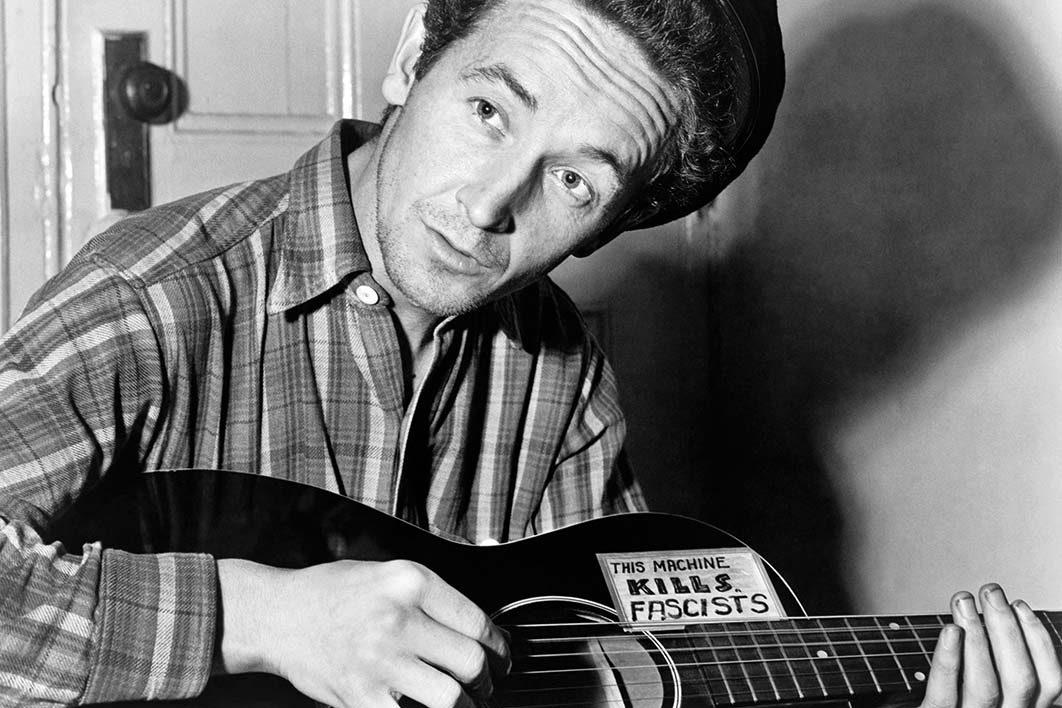 Patriotism is often a contentious matter, partly I suspect because it’s hard to agree on what we mean by it. When it becomes caught up with music, the level of contention tends to grow. Take the cases of Irving Berlin’s “God Bless America” and Woody Guthrie’s “This Land Is Your Land,” both of which have accrued layers of significance that might have surprised their writers.

Berlin wrote the first version of his song in 1918. It was the year he became an American citizen and the year he joined the army. The song was for a comedy revue about army life, and “God Bless America” was intended as its climax. But the song was a little mawkish, certainly not funny, and it was obvious to Berlin that it was unsuited to its purpose. So he dropped it from the show and put it away in his “song trunk.” There it remained for the next two decades.

In 1938, the singer and radio entertainer Kate Smith asked Berlin if he had something she might include in a show for Armistice Day. Out from the trunk came “God Bless America,” the songwriter taking the opportunity to modify its lyrics, making it more like a plea for peace against the background of rising European fascism. Smith’s performance was such a success that soon she was singing it on her radio show every week, and at the 1940 presidential election, both candidates, Franklin D. Roosevelt and Wendell Willkie, used the song at their rallies. Some people even thought it would make a good national anthem.

“The Star Spangled Banner” had only become the official US anthem in 1931, and was always an odd choice. Yes, it had a stirring, if somewhat convoluted, tune; but how many Americans could tell you, hand on heart, what Francis Scott Key’s words were about? (They’re about the British bombardment and American defence of Fort McHenry during the Battle of Baltimore in the War of 1812.) “God Bless America,” now coming out of the radio every week, might have had a less distinguished tune (in the pantheon of Irving Berlin numbers, it’s hardly up there with “Cheek to Cheek” or “Puttin’ on the Ritz”), but at least you could understand the words, which were about the sorts of things national anthems were meant to be about.

But already the song had detractors. One was the singer and songwriter Woody Guthrie, who heard “God Bless America” wherever he went and grew to loathe its cloying, self-congratulatory tone. He considered Berlin’s song exclusive, celebrating a vision of America not everyone could share — certainly not the people he knew. In 1940, he wrote “This Land Is Your Land,” turning Berlin’s lyrics back on themselves. “From the mountains to the prairies / To the oceans white with foam” — lines that are both poetic and idealised — became, in Guthrie’s song, more precise: “From California to the New York Island / From the redwood forest to the Gulf Stream waters.” This was a song properly rooted in the American soil.

Guthrie’s next line made the connection with Berlin’s song more explicit yet — “God blessed America for me.” That was the tagline at the end of each verse in the original version; four years later, when Guthrie recorded the song, it had been replaced by the more familiar refrain, less pointed but lyrically stronger: “This land was made for you and me.”

As usual, Guthrie found an existing tune for his words, borrowing a Carter Family song that in turn had made use of an old hymn tune. But in spite of its musical origins in the church and the fact that the words — which are essentially about sharing — are hardly revolutionary, there were those who were swift to condemn the song for its political sentiments. Increasingly, the song cropped up at protests and left-wing celebrations. In 1981, Bruce Springsteen sang it at a concert in London, dedicating it to “Bob Marley and the people of Brixton” — this was a few weeks after the Brixton riots and Marley’s death.

Thereafter, it became a regular feature of Springsteen’s concerts. In 2009, he sang it with Pete Seeger on the steps of Washington’s Lincoln Memorial for President Obama’s inauguration. I thought of that moment this week, as I looked at the image of masked troops lining those same steps at the behest of Obama’s successor.

And I thought of “God Bless America.” To Woody Guthrie, in 1940, it was all sanctimonious patriotism, but right from the start it had another sort of detractor: American fascists, those white supremacists who believed an immigrant Jew like Israel Baline had no business writing songs about God, let alone America.

But music is flexible, its words may be reinterpreted, and both songs and singers may fall from grace. In 2010, Noel Stookey and Peter Yarrow, the surviving members of Peter, Paul and Mary, insisted their recording of “This Land Is Your Land” be no longer used by the National Organization for Marriage, a lobby group opposed to same-sex marriage, as its views were antithetical to those of the singers.

And just last year, Kate Smith’s widely beloved recording of “God Bless America,” which had become a part of many American sporting fixtures, was dropped by the New York Yankees and the Philadelphia Flyers. It turned out that the singer who had helped make famous this alternative national anthem by a Jewish immigrant and had once used her radio show to plead for racial tolerance had, early in her career, recorded such novelty songs as “Pickaninny Heaven” and “That’s Why Darkies Were Born.” •