The nail-bitingly long count has given Coalition dissidents plenty of time to snipe, writes Peter Brent 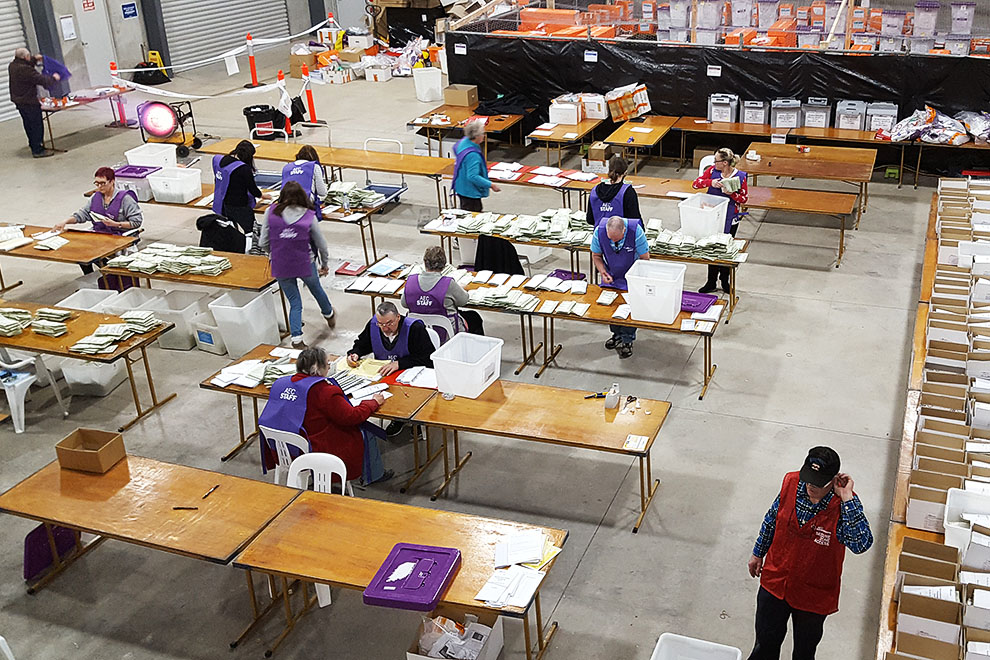 As the votes rolled in on Saturday evening, the once-jolly gathering gradually turned sombre. By 8.30pm every face in the room was visibly elongated, as a big swing against the government became obvious and a hung parliament looked possible. Their worst fears had been realised.

I refer of course to the gathering of Australian Electoral Commission bigwigs (or how I imagine it), because election authorities the world over live in terror of close outcomes. Evenly poised results intensify the pressure and dial up the spotlight. The weakest links pop out. Without a virtual dead heat in the 2000 US presidential election, for example, the world would not have come to know of hanging chads, undercounts and overcounts, and Palm Beach County.

With hindsight, the AEC survived the 2010 hung parliament remarkably well, partly because no House of Representatives electorate result was particularly close. But recall the fiasco in Western Australia in late 2013, when electoral commissioner Ed Killesteyn’s decision to have a Senate recount eventually led to his resignation.

Australia is unusual in having a national body that handles all aspects of elections. In most countries, local councils perform the tasks under a national coordinating body. That way, the odium from mistakes is cauterised. We expect a lot from the AEC because it (and its predecessors) has given us a lot, for 115 years. We take for granted a degree of excellence that most developed nations don’t enjoy.

As the count proceeds at snail’s pace, it is difficult to know how critical of the AEC one should be. It’s easy to urge them to “just count the bloody things,” but i’s must be dotted and t’s crossed.

Progress is slow not because of the record number of pre-poll votes we repeatedly heard about during the campaign (which ended up being not as many as expected); the vast majority of pre-polls made it into the election night count. We’re being held up mainly by postal votes, of which there are very, very many.

Postal votes arrive in envelopes and must be ticked off against the roll, partly to make sure the people concerned haven’t voted already. Signatures must be checked, and then the ballots can be counted.

In 2007, postal votes accounted for 5.5 per cent of turnout. In 2010, it was some 6.1 per cent. At the last election, in 2013, they leapt to 8.3 per cent and this time will likely come in at around 9 per cent. (Some of them, although they were cast before polling day, are still in the post; they will be accepted until Friday week.)

And those figures are just percentages. In 2007, valid postal votes numbered 706,000; they’ll probably number around 1.2 million this time. That’s about a 75 per cent increase; and you can be sure the number of relevant AEC workers hasn’t grown commensurately.

Oh, and don’t forget the new Senate voting rules, the counting for which is much more labour-intensive than under the previous system.

On election day, social media contained accounts of long queues and, worse, incorrect Senate ballot instructions. Social media is not necessarily an accurate reflection of reality, but in the Australian today electoral commissioner Tom Rogers acknowledged the first and perhaps alluded to the second.

If, as accounts led us to believe, a significant number of polling staff were instructing people to vote one to six, and no more, above the line (or one to twelve, and no more, below the line), that would represent an unforgivable lapse in training. Thankfully it would not have produced an increase in informality, but it may affect Senate outcomes.

The long queues were partly, or even substantially, a result of criticism the AEC received from the Australian National Audit Office, backed up by the joint standing committee on electoral matters, for supposedly employing too many staff, at too many polling places, in 2013. Some of the auditors’ points were valid, others just silly.

The result is a delay in counting that only matters because the vote is so close. Oh, for a first-past-the-post system with only one elected chamber, like Canada’s or Britain’s. Our ways of electing MPs, in both houses, are complex, and if we want ballots counted quickly, perhaps we need to devote more resources.

So why not internet voting to speed things up? The calls are out yet again, with inevitable reference to the wide use of internet banking. Forgotten is the time and effort, by banks and individuals, that goes into setting up these online facilities. (The NSW Electoral Commission has trialled internet voting with selected categories of voters at its last two elections. Needless to say, it is labour-intensive.)

Six years ago, legislation changed the rules to enable pre-poll votes cast in the home electorate to be counted on election night. Without this amendment, the backlog today would be too horrendous to contemplate.

Now it’s postal votes holding us up. This might be the next frontier: working out a way to process the majority of them so they can be counted on Saturday. The increasing use of live electoral rolls could facilitate this. Postal votes traditionally favour the Coalition – to the tune of around 6 per cent of the two-party-preferred vote at the last three elections. Absent votes favour Labor, but not by as much, and are down this year as a result of more widely available pre-poll voting. So late counting should favour the Coalition more than usual.

In fact, the Coalition’s energetic postal vote campaign is partly responsible for the counting delay. While it probably led to more older people (who favour the Coalition) registering a vote, it would also have led to some Coalition supporters simply opting for a postal vote rather than waiting for Saturday.

If the Coalition emerges with a majority of seats but a prime minister severely wounded by this week’s barrage from government ranks, the “successful” postal vote campaign might be partly to blame. •