William McMahon’s famously ill-starred prime ministership has been back in the news, not necessarily to the advantage of the federal Labor government. Paul Rodan recalls the election of nearly forty years ago 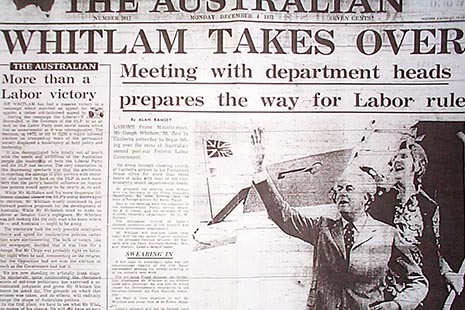 All change: The Australian’s front page (above) on the Monday after the 1972 federal election.
Photo: Whitlam Institute

RECENT unflattering comparisons between Julia Gillard’s prime ministership and that of William McMahon are especially timely given that 2012 marks the fortieth anniversary of McMahon’s defeat by Gough Whitlam, which led to the first change of national government in twenty-three years.

Momentous as Labor’s 1972 victory was, the result – to use that well-worn phrase – was “a close-run thing.” Labor secured 49.6 per cent of the primary vote and 52.7 per cent of the two-party-preferred vote for a lower house majority of nine (sixty-seven to fifty-eight). To employ the common post-election formula, had several thousand Labor voters in five close electorates stuck with the conservative Coalition, there would have been no Whitlam government.

Of course, in terms of electoral justice, such an outcome would have been outrageous. In 1969, with 49.8 per cent of the two-party-preferred vote, the Coalition had been returned with a majority of seven, yet here was Labor barely any better off in 1972 with nearly 3 per cent more of the two-party vote. No wonder electoral reform was such a high priority for Whitlam Labor.

Part of the explanation for the narrowness of Labor’s win lies in the oft-forgotten fact that the party lost seats as well as won them in 1972. Indeed, two states (Western Australia and South Australia) recorded two-party swings against Labor (with the loss of two seats in the former and one in the latter), while in Victoria the overall 5.5 per cent swing to Labor couldn’t save Bendigo MP David Kennedy from defeat on the issue of abortion – a rare example of an MP losing a seat owing solely to a single issue. Without these gains for the Coalition, Labor would have governed with a seventy-one to fifty-four majority.

Labor had probably over-achieved in South Australia in 1969, and the gain of the seat of Sturt possibly surprised it as much as it did the Liberals. Sturt’s return to the conservative fold in 1972 in the context of a drop of 1.5 per cent in Labor’s state two-party-preferred vote was no huge shock.

The case of Western Australia was more interesting. Labor’s gains in 1969 had included a surprise victory in the conservative stronghold of Forrest. The sitting member, external affairs minister Gordon Freeth, was unpopular among conservative elements – especially the Democratic Labor Party (whose preferences were critical in ensuring Coalition majorities in close seats) – because of his politically naive suggestion that the presence of Soviet naval vessels in the Indian Ocean need not be great cause for alarm: not a great career move for someone whose seat’s western boundary was the ocean in question. All other things being equal, with a candidate other than Freeth, it was a reasonable expectation that Forrest would return to the conservatives in 1972.

But all other things were not equal: for the Coalition, they were better than equal. In March 1971, the state election saw the largely unexpected victory of Labor by the narrowest of margins. John Tonkin’s government survived by the Speaker’s vote and the good health of its marginal seat MPs. But long before the 1972 federal election it appeared out of its depth and ineffectual, as befitted the accidental administration it was. Although the jargon was not then in vogue, state Labor was damaging the Labor “brand” and the voters took it out on federal Labor in December 1972. The party lost 4.3 per cent of the two-party-preferred vote and, with it, the seats of Forrest and Stirling.

This theme resonated thirty-eight years later when Julia Gillard faced the voters in 2010. Rancid state governments in New South Wales and Queensland almost certainly dragged down the Labor vote in those states and possibly constituted the difference between majority and minority government. This assessment is tempered by the observation that those voters were also casting judgement on an incumbent government, whereas Whitlam had been in opposition. One presumes that John Tonkin fell off the Whitlam Christmas card list.

Even the 1983 election, won in a landslide by Bob Hawke, could not produce a pro-Labor swing in all states. The national swing of 3.6 per cent was not reflected in Tasmania, where the politics of forests saw a two-party-preferred loss of 3.5 per cent, denying Hawke a clean sweep: all five Tasmanian seats stayed with the Liberals. Rudd-led Labor was the first of the “modern” federal Labor governments to win government with positive swings in all six states.

The 1972 election included one feature of enduring relevance. Only two states failed to produce a majority two-party-preferred vote for Labor: Queensland and Western Australia. In the fifteen federal elections since, Labor has achieved such a majority only three times in Western Australia and twice in Queensland, which clearly qualifies in social science terms as a “pattern.” Indeed, the trend was in evidence before 1972, suggesting that state political culture is a very real concept, affected by long-term factors rather than by the transient issues beloved of many political journalists.

While state Labor parties in Queensland and Western Australia have managed to customise electorally attractive “products” in modern times (sometimes reinforced by dubious alliances with local business interests), the terrain remains largely barren for federal Labor. Yet future national majorities for the party will continue to be based on electoral appeal outside the two largest states.

The narrowness (in terms of seats) of McMahon’s loss prompts the question of whether any policy initiative might have saved him. While Whitlam’s victory was decisive, the magnitude of the win did not reflect the mastery which he had established over his opponent. After twenty-three years, while there was excitement in some quarters, there was still palpable apprehension in others about a change of government.

By 1972, the controversial practice of conscripting young men for national service was serving no obvious purpose. Australian troops were no longer in Vietnam, military professionals generally abhor the draft, and there was no evidence that the policy was a vote-winner. Wavering Coalition-voting parents, concerned about losing their sons for two years for no apparent good reason, may have stuck with McMahon had he jettisoned this policy liability. The twenty-year-old sons, of course, had no say, with the voting age being twenty-one at the time.

As to the Gillard–McMahon contest for worse prime minister, I take refuge in the famous words attributed to Chinese Premier Zhou Enlai, responding in the 1950s to a question about the effects of the French Revolution: “It’s too early to tell.” •

Paul Rodan is an Adjunct Professor at the Swinburne Institute for Social Research.

A world of our own making

Without realising it, we seem to have entered a new geological epoch. Brett Evans looks at how we got there and what it means

Earthrise: The view of the rising Earth that greeted the Apollo 8 astronauts as they came from behind the moon after the lunar orbit “insertion burn.” NASA 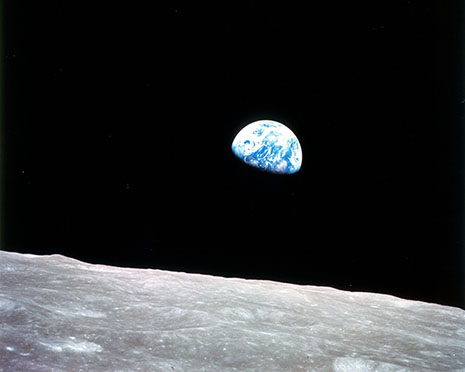 Earthrise: The view of the rising Earth that greeted the Apollo 8 astronauts as they came from behind the moon after the lunar orbit “insertion burn.” NASA