Heated campaign draws to a close in Timor-Leste 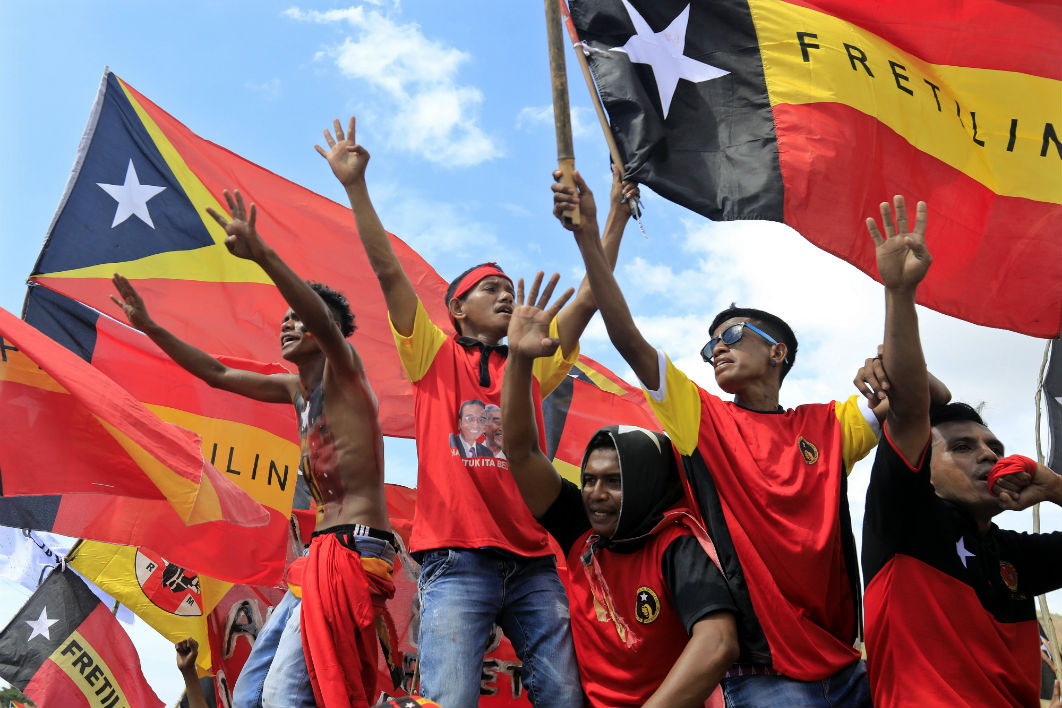 After a tense month-long campaign and two rest days, East Timorese cast their votes tomorrow in the country’s latest parliamentary elections. With the campaign characterised by considerable bitterness between the major parties, much is at stake.

Despite narrowly prevailing at the election just nine months ago, the Fretilin-led minority government failed to gain parliamentary support for its program and budget during 2017. The president — also from Fretilin — dissolved parliament and called tomorrow’s poll. The East Timorese electoral agencies, short of funds after last year’s election and the parliamentary impasse, have risen to the occasion extremely well. And, in a remarkable testimony to Timor-Leste’s young population, the electoral roll has grown by 3.1 per cent to 784,000 voters, with around 24,000 voters turning seventeen in just over nine months since last July.

Last year’s campaign came in the wake of a national unity government involving informal power-sharing between Xanana Gusmão’s CNRT and Fretilin. But relations quickly soured after an election that Fretilin won narrowly with twenty-three seats to CNRT’s twenty-two. In the end, Fretilin was only able to attract the Democratic Party, with its seven seats, to its minority coalition government, giving prime minister Mari Alkatiri thirty seats in the sixty-five-seat parliament. Within weeks, the remaining parties had formed the Parliamentary Majority Alliance, or AMP, a coalition controlling thirty-five seats, and had voted down the government’s program and budget.

Fretilin feels aggrieved that it did not receive parliamentary support after narrowly finishing ahead last year, despite an alternative coalition having been ruled out publicly by Xanana Gusmão in the immediate wake of the July election. For its part, the AMP feels bitter about Fretilin’s parliamentary tactics last year, which delayed the second presentation of the government program and prevented it from falling before the six-month mark, when the president could dissolve parliament and call fresh elections. AMP figures feel that their alliance should have been installed in government during the life of the parliament. How these issues have influenced the voting public will be known tomorrow.

This year’s campaign has been marked by the resurgence of the “history wars,” the clash between the two wings of the East Timorese resistance during the Indonesian occupation. The AMP has reunited Xanana Gusmão and his CNRT with former president Taur Matan Ruak’s Popular Liberation Party, or PLP, which were at loggerheads during the 2017 election. Both were leaders of the armed resistance, Falintil. The campaign has been frequently depicted as a contest between the armed front and members of the diplomatic front, who were outside the country during the occupation, including prime minister Alkatiri and key diplomatic figure Jose Ramos Horta, who has thrown his weight behind the Fretilin campaign. Though he has not responded to them, Ramos Horta has evidently been hurt by the attacks on his legacy, some of which have sought to diminish the contribution of those who struggled for independence in the international arena.

This division over resistance history has lent an unpleasant air to a campaign that has also been marked by exchanges of personal slurs between the major party leaders, including some outbursts of anti-Muslim sentiment directed at the Fretilin leader Mari Alkatiri, and fractious personal debates on Facebook.

From the east of the country have come reports of rock attacks on AMP caravans in Viqueque, bringing back memories of the divisive 2007 election, which occurred in the wake of the 2006 political–military crisis. The AMP parties have also complained of low-level attacks in Laga region of Baucau, were temperatures still run hot over the death of dissident veteran Mauk Moruk in 2014. Yet the campaign has been remarkably peaceful on the whole, with colourful mass rallies of party supporters generally well behaved throughout most of the country.

The campaign has also been marred by a handful of accusations of favouritism and irregularities against the electoral agencies, prompting the head of the National Electoral Commission, or CNE, to publicly defend the organisation in press conferences. Several complaints originated on AMP’s Facebook page, including concerns over printing errors in the ballots, which were quickly identified and cancelled, and suspicions about meetings between CNE and political parties that turned out to be part of routine investigation of previous complaints. The CNE has responded quickly and satisfactorily. With domestic and international observers closely watching the process and extremely professional electoral agencies, there is very little scope for manipulation. The CNE and the Technical Secretariat of Electoral Administration have done an excellent job under trying circumstances with limited budgets.

While the parties have discussed differing visions for the future, especially during the series of TV debates, considerable energy has been diverted into personal and historical debates within the small political elite. The new AMP alliance brings together two parties that ran last year on fundamentally different development agendas, and it remains to be seen how the CNRT’s focus on major infrastructure spending can be reconciled with the PLP’s more grassroots focus on basic development spending on health education and agriculture. How voters have received this new combination will be known tomorrow. For their part, supporters of Fretilin and the Democratic Party, or PD, have been on friendly terms throughout the campaign, suggesting the alliance seems to be holding, though this relationship could be easily revisited in the inter-party negotiations that follow the election.

The AMP is a formidable coalition of parties that received 29.5 per cent, 10.5 per cent and 6.5 per cent last year: a total of 46.5 per cent. It could also receive the support of the Democratic Development Front, or FDD, the coalition of the smaller parties most likely to exceed the 4 per cent threshold required to get seats. This is not certain, though, and there are at least some rumblings of dissent from one of the parties inside FDD. On the other side, Fretilin received 29.7 per cent in 2017, and its partner in the minority government, the PD, received 9.8 per cent.

No polls have been taken to indicate the likely result tomorrow. As a baseline indication, if last year’s vote is notionally combined into the new party coalitions that have formed, the AMP would start with a nominal allocation of thirty-three seats — the minimum majority required. In turn, Fretilin, PD and the FDD would receive twenty-one, six and five seats respectively. If FDD can’t clear the 4 per cent hurdle, these notional numbers rise to thirty-six for the AMP, twenty-two for Fretilin, and seven for PD.

The AMP therefore starts as favourite on paper, but the outcome tomorrow can easily change from the 2017 results., As a rough guide, Fretilin requires a swing of just under 4 per cent (if FDD does not take seats) rising to more like 6 per cent if the FDD gains seats and backs the AMP. These are clearly challenging targets for Fretilin, though not impossible, especially in the former case. It may be that the smaller coalition becomes instrumental in the final result if things run close.

Some longer-term trends are striking. At a forum on the elections I conducted in Dili yesterday, younger Timorese commented that though they are often reluctant to openly criticise their resistance-era leaders, young people are more interested in the development policies of the government and how they will help to create future jobs. There was also a sense in last year’s election result that while resistance-era legitimacy remains important to political fortunes, it is starting to offer diminishing returns for East Timorese leaders as the median age of the voting public falls, and voters look for solutions to entrenched development problems. The young people at the forum also felt that the direst warnings of potential trouble if one side or the other loses tomorrow have come from political insiders themselves, with most ordinary people confident that the national police can manage any post-election troubles.

Young voters also said Dili’s noisy and active social media has played a mixed role — allowing more opportunities for debate, on the one hand, and especially for women’s and young people’s voice to come through, but also distributing fake news and rumours, and not fully representing rural voices. Another potential sleeper trend is the changing attitude of the Catholic Church to the major parties. The Church responded positively to the concordat with the Vatican orchestrated by the PM of the previous national unity government, Fretilin’s Rui Araujo. Despite occasional slurs against Mari Alkatiri, most of the older political leadership from the 1970s does not identify strongly with the church, though younger Timorese broadly do.

As tomorrow’s poll approaches, both sides are supremely confident of victory in their public statements. Either way, it is likely that Timor-Leste will be in good hands, and the real issue as always will be how the unsuccessful parties accept the results. After last year’s uncertain result, East Timorese will be hoping for a clear and decisive outcome ●