This time the election campaign needs to be reported differently 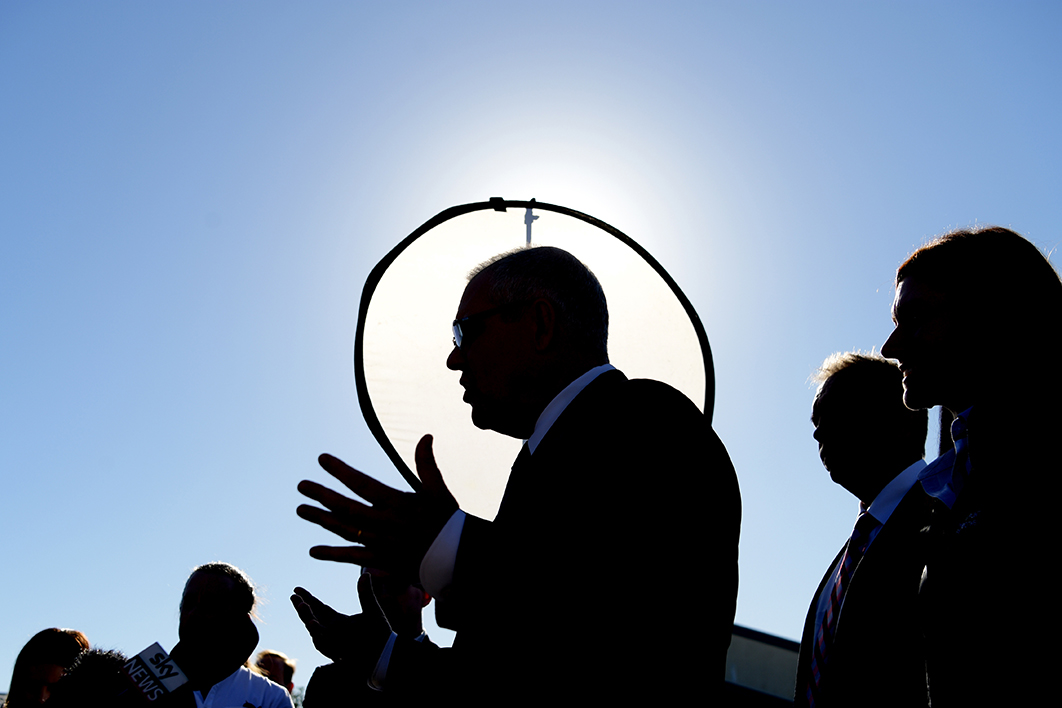 The flat campaign: prime minister Scott Morrison speaks to journalists in the glare of TV lighting during the 2019 election campaign. Tracey Nearmy/Getty Images via AAP

So here we are again, on the brink of a federal election campaign — or perhaps we are already over the brink and into the drink.

Among journalists, a slightly weary discussion is beginning about how the campaign should be reported. Few thoughtful journalists are entirely happy with the routines and rituals of political reporting in this country, yet the same tropes repeat themselves every time an election comes into view.

One thoughtful observer is Sean Kelly, whose new book about Scott Morrison is best understood, I think, as an essay on politics. It seems to be largely addressed to the journalists who have, on Kelly’s analysis, helped create the “flat character” of “ScoMo.”

The title of the book, The Game, sums up Kelly’s diagnosis — a political system and a country deprived of meaning and purposeful dialogue, making it unable to solve problems or harness opportunities. A country, in fact, that has become a “flat character.”

Political scientist Rod Tiffen highlighted the recurring problems with election reporting after the 2019 poll. Political parties were much better at learning from past poor performance than were the media, he said, which displayed “little learning… about how they might cover elections better.”

Research by the Shorenstein Center in the United States suggests that journalists’ emphasis on political tactics and strategy builds voter cynicism, thus increasing the appeal of “outsiders,” who can seem like a breath of fresh air. This kind of reporting helped to build Donald Trump’s support.

Cynical, clichéd reporting also makes people angry with the media, and fuels distrust. When journalists devalue the political process, they undermine their own effectiveness because most people care about their country, and their politics.

Adding to this, surely, is what Tiffen describes as journalistic “superiority signalling”: the practice of treating “the voters” as though they are wholly divorced from the audience for journalism. Too often “the voters” are assumed to be ill-informed or in some other way defective. Journalists hold themselves above the fray, describing the election contest as boring or devoid of content, rather than taking on their responsibility to make it interesting and relevant.

Now is as good a time as any to think about how it might be done better, not because the ideas are new, but because the need is urgent.

In their book Votes That Count and Voters Who Don’t: How Journalists Sideline Electoral Participation (Without Even Knowing It), Sharon E. Jarvis and Soo-Hye Han show how reporting that implicitly devalues the power of a vote depresses people’s participation and increases their anger with the media. What kind of reporting do they mean? They target reporting that is poll-driven, and reporting that concentrates on political strategy and tactics rather than issues.

In this country polls have dominated political reporting since at least the 1980s. This is partly because media outlets often commission the polls, and the results give them a neat exclusive. Historically, it is also because polls have been broadly accurate, therefore carrying the appeal of a glimpse into the crystal ball.

But poll-driven reporting paradoxically tends to devalue the power of a vote. It suggests the contest is already decided. And it takes away from a sense of active participation around issues that matter. It emphasises the game — the horserace in which all that matters is who is ahead.

Recent contests have cast doubt on whether the polls can still be trusted. During Australia’s 2019 campaign they were all manifestly wrong, and in similar ways. Yet political reporting has barely responded. Polls, some with a tweak or two, remain at the centre of coverage.

Tiffen suggested political reporting could be improved by concentrating more on frontbenchers than on leaders. If the media sponsored debates between ministers and shadow ministers, we could see Marise Payne facing off against Penny Wong on foreign affairs, Angus Taylor and Chris Bowen on climate change, Josh Frydenberg and Jim Chalmers on the economy, Greg Hunt and Mark Butler on health, and Alan Tudge and Tanya Plibersek on education. We could better assess the talents of the teams, as well as their approach to the issues.

One of the most radical, but no longer new, ideas for improving political reporting came from the American journalism academic Jay Rosen, who led a movement in the early 1990s, “public journalism,” that attracted a passionate following among journalists and helped reshape some of the leading US newspapers. Rosen suggested that journalists had lost their connection with the public — that they were always gleefully cataloguing problems but not offering any solutions. The public retreated, and without that public, journalism “must die.”

The model Rosen proposed didn’t involve commentators preaching to the audience, but rather a conversation. The job of journalists, the movement suggested, was to help make democracy work. By the late 1990s hardly a news organisation in the United States hadn’t been influenced to some extent by the ideals of public journalism.

Media outlets involved typically held public forums to discuss matters of community concern and then tried to build collaborations to sort things out, letting community voices steer the reporting. Journalism was reconceived as a kind of “public square” or “town hall” in which people could meet to deal with their common business.

The Virginian-Pilot, for example, decided in 1995 to try a different method of covering elections for the state legislature. Its editors informed candidates that the paper would be basing its coverage on a citizens’ agenda: a list of priorities culled from interviews and roundtable discussions with residents, which would then be reported on in depth. Candidates would be asked for their views, whether or not those issues were on their preferred agendas. What the paper wouldn’t do, the editors said, was report personal attacks, stories about political strategy, and comments on who was ahead and who was not.

In other words, the paper would report politics as though it actually mattered. There would be no talk of how things might “play” in the electorate, and very little commentary based on backroom chats or the office gossip of politics. The assumption was that the audience had a stake in the news. The resolutions transformed both the newspaper and the conduct of the campaign.

As with all ideological movements, the fervour didn’t last — partly because it was overtaken by the hard reality of the collapse of the media’s business models. Many of the local papers in the vanguard of the movement no longer exist. And the towns that have lost their local newspapers are also those where misinformation and conspiracy theories have the tightest grip.

The only conscious experiment I am aware of was the Sunday Age’s Climate Agenda, launched in 2011, which used online forums to gather ideas and questions to steer its climate change coverage. A senior investigative journalist was dedicated to seeking the answers to audience questions. (Declaration: I was marginally involved in this, as part of my academic research.)

Rosen was also influential at the ABC, with then managing director Mark Scott picking up on the “town square” rhetoric in framing the appropriate role of a public broadcaster. Scott was optimistic about using social media as part of this push. In our own time much of that optimism has faded, and in recent weeks journalists have taken to expressing contempt for users of social media and announcing their withdrawal as though it were a point of professional pride.

I worry about that move. It too easily becomes another form of superiority signalling. It assumes that the journalists and their audiences are a more knowing and elite group — somehow separate from the citizens who will soon vote, the majority of whom are social media users.

Social media has allowed a wider range of voices to be heard in political debate. That is both its curse and its blessing. If journalists leave the field, the bad actors have a free run. On the other hand, if journalists participate well and effectively, then both social media and political reporting could be better.

How else might political journalism be improved? I hear from Labor contacts that the strategy for the forthcoming election is twofold. “Don’t be hated” and “win the marginals.” Doubtless the Coalition has a similar strategy.

That means the day-to-day contest will take place out of sight for most of us. Do you think Albanese isn’t cutting through, or that Morrison is seen as a liar? Perhaps, but perhaps not — in the dozen or so electorates where their efforts are concentrated.

A combination of lockdowns, reduced media travel budgets, hollowed-out local reporting, highly targeted political messaging on Facebook, and a cleaving to Canberra by our most senior political journalists means that election journalism is not, or at least not yet, giving us a window into how people in the marginal electorates are thinking.

Imagine how that might change if there were reporters at the school gates, and in the hospital waiting rooms, and chatting to the dog walkers in the park.

Is it naive to hope for change?

Probably. Journalists, like everyone else, are weary after two years of pandemic. Some would welcome innovation and experiment, but resources are thin. Proprietors and managements are conservative and lacklustre.

But we can hope, and I think we should. The ideas for improvement have been around for decades. What we need is implementation and experiment, because business as usual is not really cutting it if the aim is a healthy democracy. •

Margaret Simons is a journalist and writer. Her latest book is Penny Wong: Passion and Principle.

A year before the next state election, the Victorian premier and his party are well ahead in the polls

A year is a long time in politics: Victorian premier Daniel Andrews during a visit to Vestas Wind Systems in Dandenong South yesterday. Joel Carrett/AAP Image 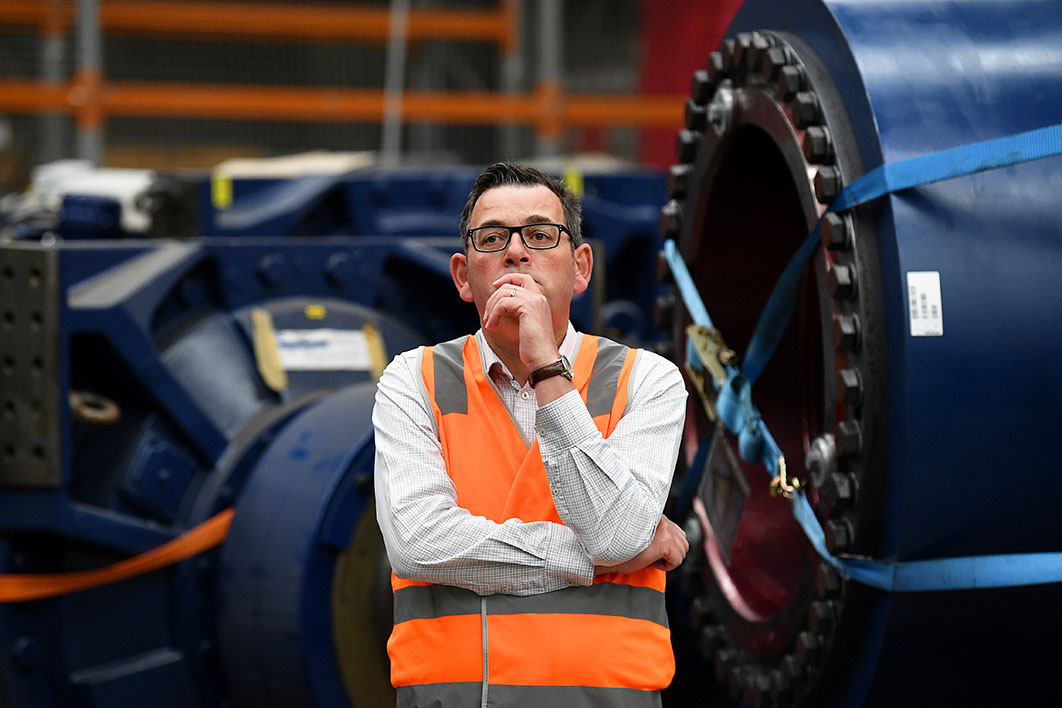 A year is a long time in politics: Victorian premier Daniel Andrews during a visit to Vestas Wind Systems in Dandenong South yesterday. Joel Carrett/AAP Image