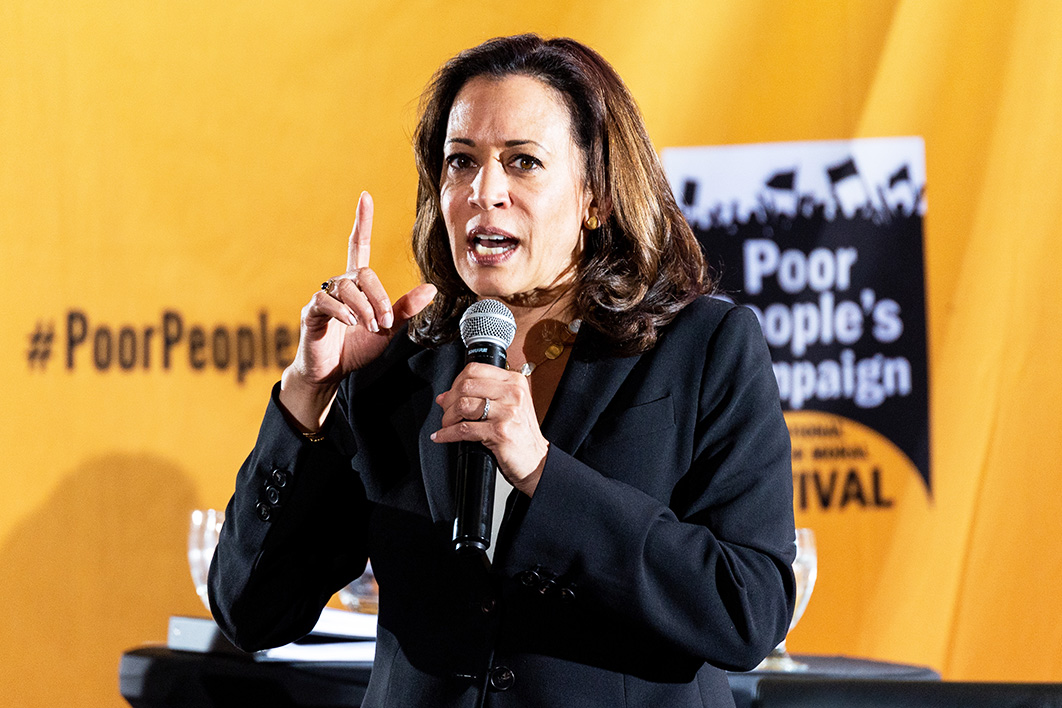 Kamala Harris: a smart choice for a campaign against Trump. Michael Brochstein/Sipa USA

Twelve years ago, Barack Obama announced that his presidential running mate would be fellow senator Joe Biden, a Washington mainstay who had been in office since 1973. The white-haired senator from Delaware was the most conventional choice possible, balancing every aspect of Obama’s biography.

Obama, the first Black presidential nominee in US history, was young and had just four years in the Senate under his belt. His international upbringing and unusual name marked him as cosmopolitan and worldly in a way that US presidents seldom were. Biden, on the other hand, came from the heart of white working-class Pennsylvania. He was known for his long career in public life and his affection for the Amtrak train that ferried him back and forth between D.C. and his adopted state of Delaware.

While Biden seemed hand-picked to provide balance to the presidential ticket, he and President Obama quickly became not just governing partners but close friends. So it’s perhaps not surprising that Biden laboured over his choice of running mate for so long, in the hope that he could replicate some of that relationship. And it’s perhaps even less surprising that he chose someone so similar to Obama to join him in the 2020 campaign.

Kamala Harris, like Barack Obama, is a groundbreaking candidate. If the Democrats win in November, she will be the first female vice-president, the first Black vice-president, and the first Asian-American vice-president. She has not been in the Senate long — less than four years — and people still need a little help pronouncing her name (it’s comma-la, with the accent on the first syllable, not the second).

The Biden–Harris ticket, like the Obama–Biden ticket before it, represents the changing face of the Democratic Party. Once home to white working-class union voters, the Democratic Party has more recently been identified with the “coalition of the ascendant”: young, urban, college-educated, increasingly female and racially diverse.

The idea of a coalition of the ascendant, while thrilling to those who were ascending, held less appeal to those being eclipsed. The backlash against Obama’s election was swift and fierce, and was part of the reason Donald Trump proved so successful in 2016. White voters, particularly white men without a university education, were not ready to concede that they no longer controlled American politics.

That story has been told many times in the past four years. But what it misses are people like Joe Biden who, rather than recoiling at being displaced, decided to work with the new generation of political leaders — not as the star, but as part of the supporting cast.

It’s one of the things that ultimately set Biden up for success in 2020. Black Americans saw Biden cheerfully support Barack Obama, never clawing for the spotlight, never insisting that he was entitled to more. The partnership, and friendship, between the two men meant a great deal to many Black voters, who ultimately saved Biden when it seemed his presidential bid was over. (The Biden nomination will someday be treated as inevitable rather than improbable, but after finishing fourth in Iowa and fifth in New Hampshire, his campaign looked dead in mid February, before he began sweeping primaries in states with a significant number of Black voters.)

Which is why, even though Biden seemed to be the conservative choice in a diverse field of candidates, he still offers a stark contrast to Donald Trump in the general election. Demographically, the two look a lot alike: both white men in their seventies from the northeast who’ve been eyeing the presidency for a long time. But that’s where the resemblance stops. Because while Trump has greeted the changing demographics of America with a fanciful promise to turn back the clock to a whiter decade, Biden has embraced the coalition of the ascendant — not always easily or smoothly, but with real commitment.

The Harris pick shows how that commitment has persisted in the post-Obama era. Biden announced early on that he would choose a woman as a running mate, and he could easily have stopped there, choosing any of a number of white women who serve in the Senate or as state governors. Certainly there were those in his inner circle urging him to pass on Harris, who they felt was “too ambitious” to be vice-president (insert eye roll here).

Biden, though, didn’t fall into that particular trap. Nor did he make the Sarah Palin mistake, choosing someone who seemed exciting but lacked the knowledge, experience and character to lead the country. He knew that his running mate had to be someone who reflected the changing nature of the Democratic Party but could also be a governing partner and, given the realities of his age, would be ready to lead the country from day one.

Judging from the first few hours since the announcement, Harris was also a smart choice for a campaign against Trump. So far the Trump campaign has struggled to define either person on the Democratic ticket. Trump has largely abandoned his “Sleepy Joe” attacks, now opting for darker accusations that Biden is barely cognisant of the world around him and being manipulated by far-left radicals. But those far-left radicals wouldn’t have chosen Harris as his running mate. Nor has the Trump team figured out how to attack her. The campaign’s first statement, which labelled her “Phony Kamala,” was a scrambled mess of vague warnings about the “radical mob” and “anti-police extremists,” an odd line of attack against a former prosecutor.

The choice of Harris largely shields Biden from attacks from the right while reaffirming his alliance with the coalition of the ascendant. If anything, it leaves him open to attacks from the left, which have already begun. Though Harris has adopted liberal policies both as a senator and as a candidate, her career as a prosecutor makes her an easy target for advocates of criminal justice reform. (Although Harris has pushed for reform, she is much more restrained in this area than many on the left.) And across the board, she is a more moderate choice than Elizabeth Warren, an equally popular choice for the #2 spot on the ticket.

So there will be criticisms, some quite sharp, coming from the left in the coming months. But the Biden campaign has likely judged that anti-Trump sentiment, along with a raft of liberal policy proposals, will be enough to shore up his left flank.

It would be easy to conclude, then, that Kamala Harris represents the safe choice, the one most likely to help Biden secure victory in November. But that misses something very important. Biden carries with him a sense of history, in which his Senate career was significant but his vice-presidency transformational. In choosing Kamala Harris, a Black woman whose parents immigrated to the United States from India and Jamaica just a few years before she was born, he is completing a process he began with Barack Obama in 2008: to build a new Democratic Party and raise up a new generation of leaders. In that way, his legacy will be not just as a cheerleader of the coalition of the ascendant, but one of its architects. •