Hot air, at a canter

Fair dinkum? Prime minister Scott Morrison waiting to be photographed in front of the Tumut 3 power station at the Snowy Hydro Scheme in Talbingo on 26 February. Lukas Coch/AAP Image 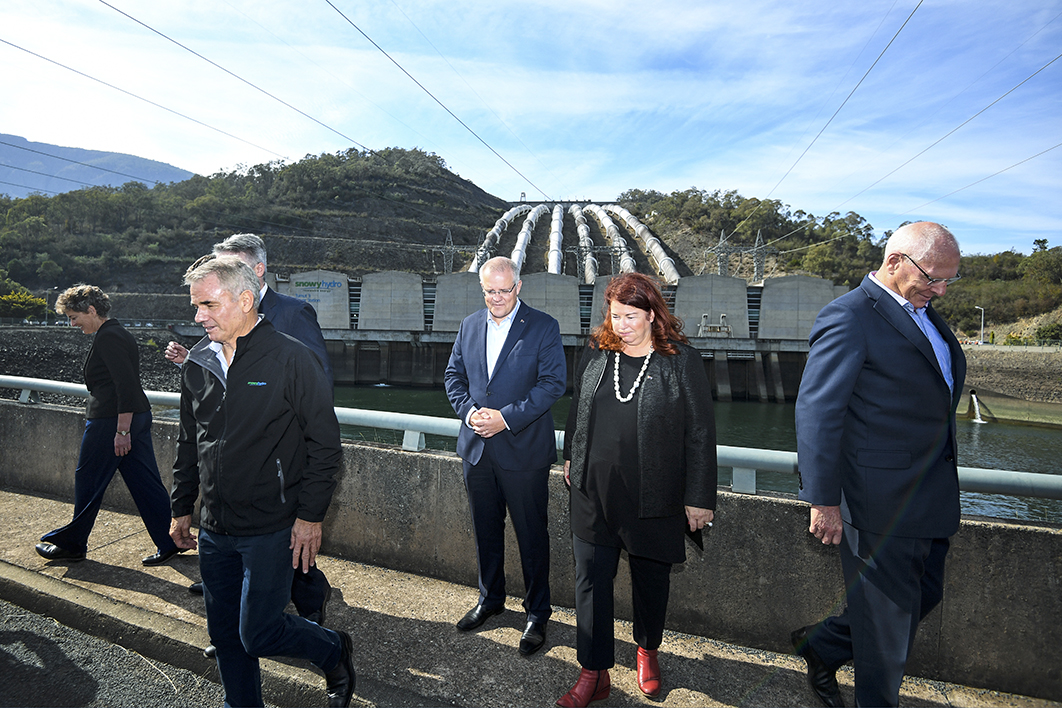 Fair dinkum? Prime minister Scott Morrison waiting to be photographed in front of the Tumut 3 power station at the Snowy Hydro Scheme in Talbingo on 26 February. Lukas Coch/AAP Image

“A lie can travel halfway around the world while the truth is putting on its shoes.” It’s a quote (usually attributed to Mark Twain) that Scott Morrison seems to have taken to heart. At least when it comes to climate change policies, he is gambling that if he creates enough colour and movement the truth won’t catch up, or at least not before the election.

Global warming has been a particularly challenging issue for the Coalition. Although Tony Abbott’s government promised to reduce emissions by 26 per cent by 2030 (using 2005 as the base year) when it signed the Paris agreement, emissions have been heading in the opposite direction for the past five years. “The truth is, the Liberal Party and the Coalition is not capable of dealing with climate change,” Malcolm Turnbull told a conference in November, because the two parties include “a constituency” that thinks climate change is “a fraud.” Each of the Turnbull government’s major initiatives to match energy and environmental concerns failed internally, the last one helping to precipitate the party’s dumping of Turnbull, which in turn provoked a strong backlash from those who thought the government was failing on the issue.

And yet, as if there were no yesterday, Scott Morrison boldly launched his Climate Solutions Fund late last month. It included more funding for Turnbull’s Snowy 2.0 hydro scheme and for new infrastructure to enable Tasmania to supply more hydro power to the mainland, both of which inspired televised prime ministerial media conferences. The package bows to Coalition sensitivities by failing to mention solar or wind power and only investing in what Morrison had previously called “fair dinkum” power.

The other major measure was a revival of the Abbott–era direct action program, which Turnbull had criticised and defunded. By the time of its demise, the program was increasingly seen to have failed to provide value for money.

Running through Morrison’s plethora of public statements about his new fund are six themes, several of which were on show in an interview with Leigh Sales on 7.30. Morrison’s handling of interviews is very different from his recent predecessors’: he is somewhat Trump-like in his determination to maintain the initiative and say whatever it takes to get through the moment, seemingly on the assumption that if the truth catches up it will happen later before a smaller audience. My guess is that this moving-target strategy is largely unpersuasive for most viewers, but it does mean that important claims can escape scrutiny. Let’s look at the six themes one by one.

“Of course” global warming is a threat to Australia

Logically enough, Sales began the interview by asking Morrison to outline his beliefs about global warming. In return she secured the welcome statement that it was a threat to “not just Australia but the world.” Earlier, responding to a question from Quentin Dempster at the National Press Club, he had conceded that “of course” climate change was a factor in the natural disasters Australia had recently suffered.

These are big advances on Morrison’s interview with shock jock Alan Jones some weeks earlier. Jones several times repeated his view that global warming was a hoax, and the prime minister knew he couldn’t agree but appeared too intimidated to disagree.

After conceding its importance to Sales, Morrison wasn’t keen to talk about specifics. How will global warming manifest itself in Australia, she asked. Australia has been dependent on its climate for “hundreds, indeed tens of thousands of years,” replied the prime minister, “as our Indigenous population has always known.” This is quite different from the singular threat posed by anthropogenic global warming, of course. Morrison gave no evidence of having thought in any detail about the challenges facing Australia.

Australia had achieved its first Kyoto target, Morrison told Sales. “And there aren’t too many countries… that can make that boast today.” This claim has become one of the staples of conservative rhetoric, but it glosses over the special treatment Australia received at Kyoto.

The Kyoto Protocol was the first international agreement under which economically advanced countries agreed to curb their emissions of carbon dioxide in order to meet the problem of global warming. And a large majority of countries actually did meet and even exceed their targets: signatory countries reduced their emissions by an average of 24 per cent over the target period from 1990 to 2010, much more than Australia did.

What Liberal politicians’ frequent invocation of Kyoto neatly overlooks is the difference in targets. Out of a desire for a unanimous agreement, the major countries allowed Australia, a relatively minor player, to secure two special, uniquely advantageous conditions.

The average target for the other countries was a 5 per cent reduction, yet Australia was allowed an 8 per cent increase. Then, at Australia’s insistence, LULUCF — land use, land-use change, and forestry — was included in the calculations. This is not usually a major source of emissions in economically advanced countries, but in the baseline year, 1990, Australia’s rate of land-clearing was abnormally high. With dramatic declines inevitable, Australia had already effectively achieved its target when it signed up.

Morrison is right. Australia did reach its Kyoto I target. Over a twenty-year period we recorded a reduction of 4 per cent in total emissions. But the reduction was entirely due to decreases in LULUCF. In fact, if LULUCF is excluded, Australia’s emissions increased by 28 per cent.

This claim is puzzling. It is true that Australia is on track to meet its Kyoto II 2020 target, not just because of the continuing decline in LULUCF emissions but also because the Kyoto Protocol included an incentive to promote quick action: if countries exceeded their targets, they received carry-over credits to the next round. This helps Australia (and several other countries) to easily meet its 2020 targets.

This is all well known, but it has nothing to do with the Coalition government, under which emissions have risen.

“These things are not mutually exclusive”

Morrison’s best-known stunt before becoming prime minister was to take a lump of coal into parliament to taunt Labor. Some government frontbenchers thought this was wildly funny. When Leigh Sales raised these antics with Morrison, he immediately countered that there was no conflict — that the government was committed to both reliable and cheap electricity and reducing emissions. No hard choices are necessary. This is one of many debates on which Morrison does not want to take a clear position in the lead-up to the election.

When Sales put to Morrison a common view among climate scientists that the Paris targets are inadequate to limit global warming to two degrees, he appeared determined to avoid discussing such uncomfortable possibilities. The real question, he said, is what Australia’s role should be. “One point three per cent is our share of global emissions and that is less than other countries; it’s more than some.” But, repeated Sales, what if current targets are insufficient to prevent temperature rises of three degrees? “Well that won’t be because of any failure to act on Australia’s part.” What we are doing is “meeting every commitment that we’ve made, and better.” But what if it is insufficient? Shouldn’t we be doing more? “You’re making a leap that Australia’s actions can unilaterally change the impact of the global climate.”

In each case he turned a question about the substance of the problem into an answer about meeting agreed targets. The targets’ adequacy was not up for debate. Morrison was not going to alarm the Australian public with fears of what might happen. No urgency is needed here.

The futility of Australia acting alone is a favourite theme of people who want to avoid action. It is rarely accompanied by any consideration of what others are doing. It is true that Australia produces around 1.3 per cent of global emissions, which actually makes it around fifteenth in a world of 200 countries. Moreover, Australia only has 0.3 per cent of the world population, meaning that it contributes more than four times its “share.”

Australia will meet its Paris commitments at a canter

Morrison took people by surprise in late 2018 by proclaiming that Australia would meet its Paris commitments at “a canter.” Given that Australia had committed to reducing emissions by 26 per cent but emissions have been rising over the past five years, the prime minister’s unelaborated statement puzzled many.

From late last year, as I described late last month in Inside Story, the government’s secret weapon has gradually dribbled out into the public domain. It is claiming that it can use credits from meeting its Kyoto targets as part of its way to meet its Paris targets. According to journalist Peter Hannam, booking those credits means that Australia needs to reduce emissions by just over 12 per cent rather than 26 per cent.

The sixteen pages and twenty-nine articles of the Paris agreement make no reference to carry-over credits — and it would be surprising if they did, given that four-fifths of the participating countries were not Annex I countries in Kyoto and have no incentive to agree to anything that does not involve a real reduction in carbon emissions.

An important follow-up to Paris was held in Katowice, Poland, in December. Its draft 133-page document to codify the rules from Paris make no reference to Kyoto carry-over credits. I haven’t seen any international document that explicitly or implicitly says this is permissible. The January 2019 OECD report on Australia’s environmental performance makes no mention of them.

Labor MPs have been using expressions like “accounting trick” and “technical loophole,” and journalists have adopted similar language. But that is soft-pedalling: it is not a loophole, it is an invention that is almost certain to be unacceptable internationally. But perhaps the obfuscation will hide from the electorate for long enough the government’s failure to move in any meaningful way towards the Paris targets it signed on to.

These six statements reveal the Morrison government’s strategy for containing political damage from the issue of global warming until after the election. Which leaves the question: if the government’s performance is such a success story, then why has it had so much trouble with it? “Well you would have to explain that to me, Leigh, because what we have been doing is getting on with the job of delivering carbon abatement.” Except, of course, that that is the one thing the government has not yet done. •

“We’ve lost our vision. A card cannot give vision to the community”

How does welfare quarantining feel to the people on the receiving end?

No easy answers: coastal Ceduna has been the first test site for the cashless debit card. West Coast Sentinel 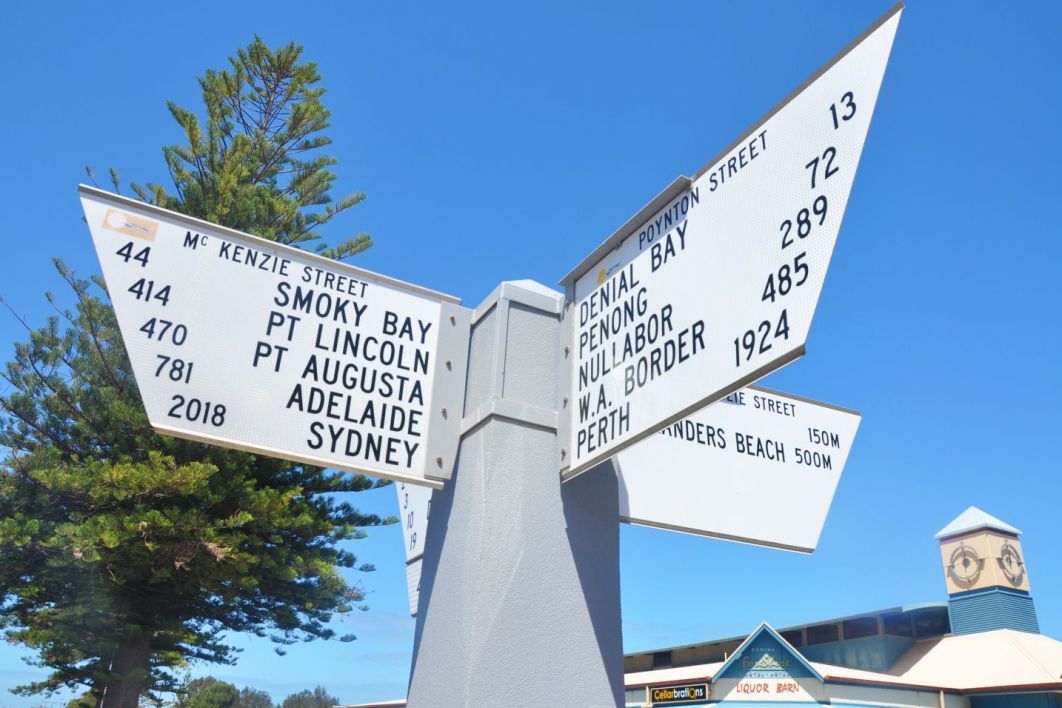 No easy answers: coastal Ceduna has been the first test site for the cashless debit card. West Coast Sentinel