Television | Annabel Crabb’s new series raises the question: is parliament living up to its house? 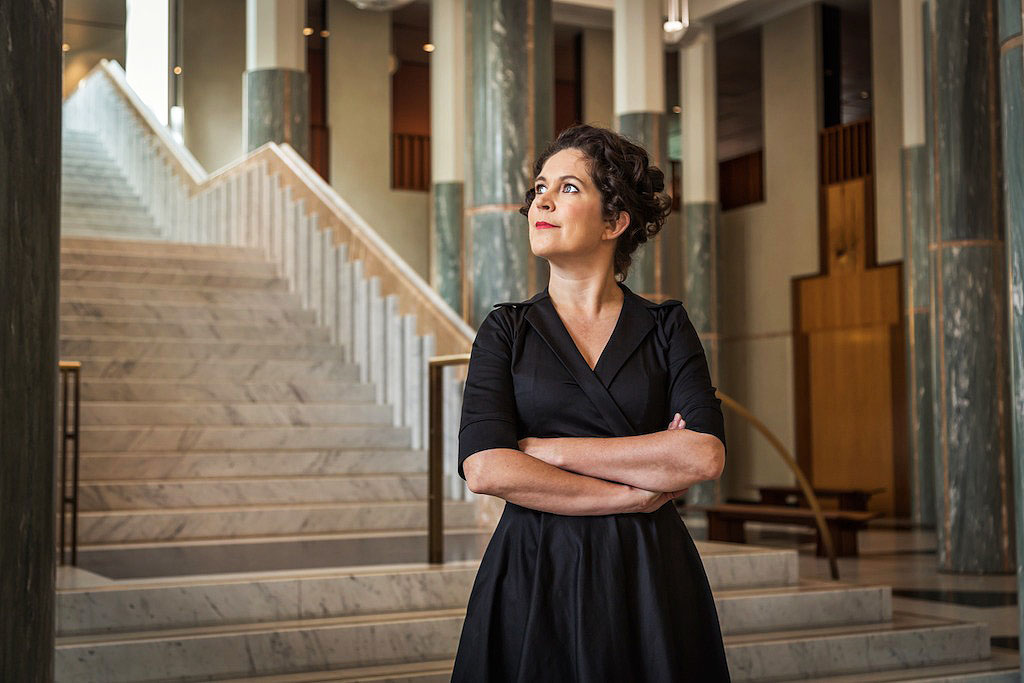 Episode 3 of The House with Annabel Crabb, the new six-part ABC series, focuses on Question Time. We see the public queuing to go in, and large groups of schoolchildren shepherded through the security scanners. Crabbe asks the leader of the House, Christopher Pyne, about preparations for this ritual show. “What do they think of it, up there in the gallery?” she wonders. Pyne, never one to let a question go without knocking a good hard nail through it, pronounces, “It’s theatre. Definitely theatre. Everyone recognises that.”

Actually, that’s a risky point of view. When Pauline Hanson tested the limits of parliamentary theatricality last week by appearing in a burqa, the demarcation line appeared with stark immediacy. Where theatre is a very permissive medium, the performative rituals of parliament are highly controlled and circumscribed. Yet theatricality remains a temptation for politicians with an exhibitionist streak, and the temptation is reinforced by the scale and layout of the two debating chambers.

In a recent interview marking the ninetieth anniversary of Old Parliament House, Heather Henderson, daughter of Robert Menzies, recalled her father focusing attention on an important point by lowering his voice, a stratagem that worked well in the relatively cramped quarters of the original building. In the new Parliament House, the chambers are too big, she says. They encourage shouting and posturing.

The House understandably treats the scale of the building as something to celebrate. Director Stamatia Maroupas was involved in protracted negotiations to enable the filming, which includes footage from a drone flown through the interior, and panoramic exterior shots of the building in the landscape. At the start of the first episode, Crabbe takes the elevator up the giant flagpole before making an entrance through the main doors of the grand Marble Foyer. She reels off numbers: there are ten kilometres of corridors in here, 7482 doors, 19,000 square metres of parquetry.

The relationship between a parliament and its house is a strange and fascinating business — and it’s perfect material for television, as was demonstrated by the 2015 BBC2 series Inside the Commons, an acknowledged template for the ABC version. In both cases, we follow newly elected MPs as they go through various processes of orientation and induction. Scenes inside the members’ tea room, party strategy meetings and MPs’ offices are interspersed with larger views of the building and its architectural features. We eavesdrop on impromptu and apparently unguarded conversations between individuals as they pass in doorways and corridors; these are intercut with sequences showing MPs delivering scripted and rehearsed displays of oratory on the floor of the house.

Both series dwell on the disparity between the enduring presence of the building and the relatively ephemeral tenure of its parliamentary inhabitants. Interviews feature gardeners, cleaners and ceremonial officials who see the comings and goings of many governments during their working relationship with this place. They are the ones who serve the building, and the parliament as an institution.

Inevitably, the ABC series doesn’t — or can’t — always measure up to its BBC predecessor. When it comes to a meditation on endurance and ephemerality, the Palace of Westminster has a history that spans a thousand years. The birth of the modern House of Commons was violent and traumatic. A dramatic week in parliament might be one in which the members barricaded the doors against the King’s troops, while street mobs with home-made weapons gathered outside, ready to do pitched battle with the soldiers. Crabb’s sprightly comment that we are seeing “one of the wildest Senates in Australian history” seems a little overblown, even if we are being treated to the occasional indulgence in costume drama.

It is easy to forget that the origins of our parliamentary tradition were revolutionary, and that the primacy of the Commons was established through the beheading of a king. In Westminster, you are at the scene of the action. Here in Australia, only a few symbolic references echo across time: the governor-general, as the Queen’s representative, is banned from entering the lower house, and the mace carried into the chamber by the serjeant-at-arms is hooded to signal its relationship with the alien presence of the monarch.

But while The House can’t match its British counterpart in historical depth of field, it has many compensating opportunities. Ours is a wonderful building whose sheer scale reflects the largeness of vision in its conception.

Architect Romaldo Giurgola once described the move from the old Parliament House into the new one as a transition from a colonial ethos to an expression of government as “the natural condition of man.” When Malcolm Fraser turned the first sod for its foundations in 1980, he heralded the creation of “a building that knows its place.” Embedded in the hill, with its expansive forecourt, it was to be “very generous in receiving the landscape” and very welcoming to the people, who were its rightful owners.

Seeking to incorporate “a wealth of public arts” into the fabric of the building, Giurgola and his collaborator Pamille Berg employed the finest craftspeople to create the decorative elements — tapestries, carvings, mosaics and marquetry. The best marble, timber and stone were used to create interiors that brought the forests and deserts of the land inside.

All this was documented in Ian Walker’s 1988 film Open House, and is explained by tour guides to the thousands of visiting groups who pass through the building’s doors each year. Perhaps the ABC felt that the story was too widely known to warrant revisiting, but Giurgola is a missing presence in The House. He has hardly been mentioned so far and, more significantly, the views that Crabb elicits fail to reflect the visionary qualities embodied in the building.

As an on-camera presence herself, Crabb is crisp and vibrant, keeps up the pace and has a way of creating rapport with the most diverse personalities. Of course, no one in the cast list matches Sir Robert Rogers, the heavily bewhiskered clerk of the House of Commons, whose imminent retirement formed a narrative through-line for the BBC series. Rogers — fully versed in the arcana of parliamentary ritual, expert in the fine detail of legislation, with an eagle eye for troublesome leaks in the roof and incipient schisms in the Westminster establishment — was always going to be irreplaceable.

That’s a story with an Australian angle that Crabb has wisely chosen not to go into, but she was clearly in search of someone to play the symbolic role of presiding spirit. The closest she gets is Sandy McInerney, “queen of the underground,” who runs the loading dock, travelling the length and breadth of her domain in a small yellow truck. Sandy takes her visitor on a trip to “the cathedral,” a vast cavity in the concrete foundations with a cement box, “the pulpit,” set high in one corner.

We are also introduced to head cleaner Maria Ljubic, who has been working in the building since the Queen came to open it, and preceded the royal entry with a brisk foray onto the red carpet for a last-minute vacuum. Serjeant-at-arms James Catchpole, newly appointed and with his white bow tie pristine from a dunking in Napisan, shoulders the mace in preparation for his ceremonial entry into the chamber. Curator Justine van Mourik, responsible for the Parliament House art collection, visits the new MPs to invite them to choose works to hang in their offices.

Newly elected Labor MP Anne Aly is seen going through the catalogue, nonplussed at first, until she homes in on a simple drawing of four refugees, staring directly out from the page. That’s the one. Later, Crabb joins her as the picture arrives, and finds her in a tense mood. She has just been thrown out by the speaker for interjecting when the prime minister was answering — or not answering — a question about refugee policy. She stares at the image of the figures caught in their vacuum, and talks. It’s a strong moment. This is not theatre, it’s politics, hard and stark. “As long as you can get political traction from proposals like this then they’re going to keep doing them. Either that or they’re stupid… I hope they’re not stupid.”

Having myself watched Question Time live from the public gallery a few times, I’d say she’s deadly accurate in both respects. Yes, there is a profoundly unscrupulous game being played here, in which policies and issues count primarily according to how they show up on the media scorecard. And yes, there is stupidity here, too. Not personal stupidity, perhaps — the politicians Crabb speaks to are all capable of being astute, sensible and human — but the stupidity of the culture they have bought into. This, in truth, is a parliament that can’t live up to its house.

But that’s not Crabb’s message. Backed by her production team from Kitchen Cabinet, she wants to maintain the light touch, crossing the party lines with a jaunty step and a winning smile. There’s nothing wrong with that, is there? Not really, at least in terms of television entertainment. Nothing wrong with it, except that it’s playing the game. • 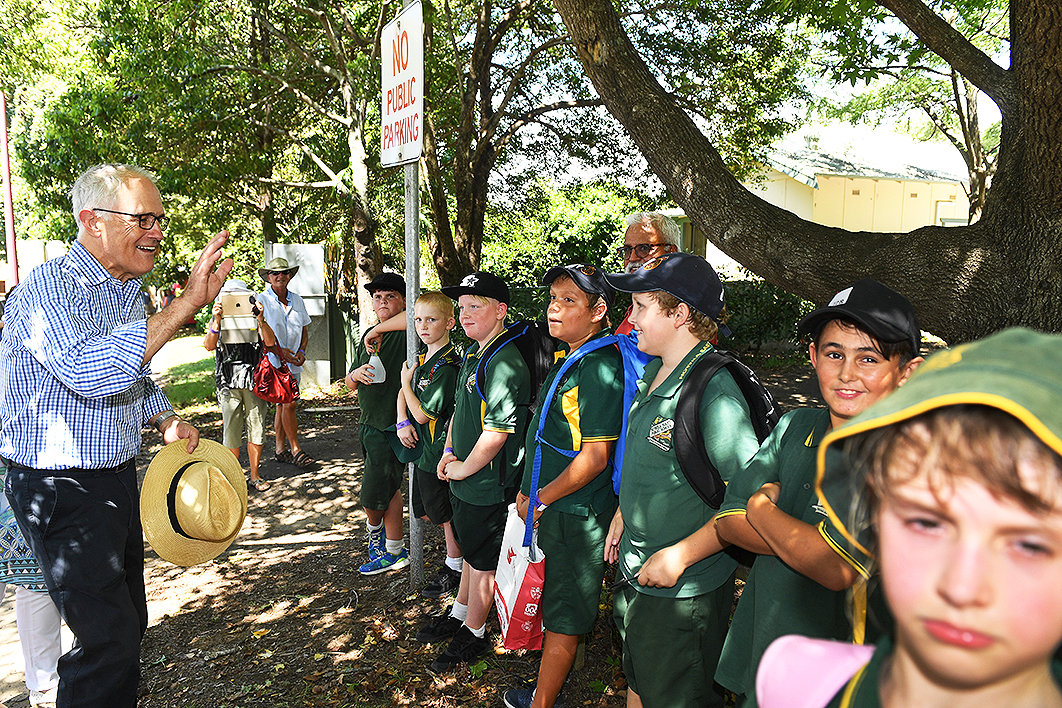