How Hamer made it happen

Dick Hamer’s election as Victorian Liberal leader was a seachange in the state’s politics and culture, writes Judith Brett 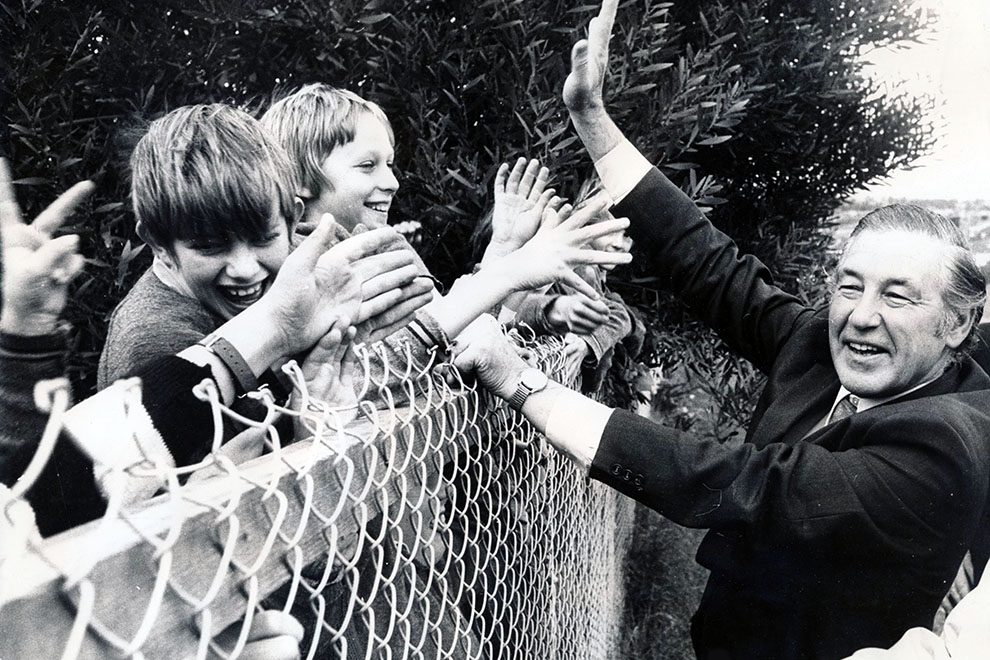 Dick Hamer became premier of Victoria in August 1972, just a few months before the election of Gough Whitlam’s government. The Liberal premier and the Labor prime minister were part of the same watershed in our history, as an authoritarian, British and masculine Australia gave way to the more tolerant and open society that had been developing since the second world war. After seventeen years of Henry Bolte, Hamer’s ascent was almost as profound a shift in Victorian politics as it would have been if the Liberals had lost office. The party went on to win the 1973 state election in a landslide with the slogan “Hamer makes it happen.”

But while there are countless books about Whitlam, until Tim Colebatch took up the challenge there has been no biography of Hamer. State premiers just don’t carry the same symbolic weight as prime ministers, but they have a huge impact on the day-to-day lives of their citizens. Transport, education, police and criminal justice, hospitals, planning and environmental laws are all still largely matters for the states, and premiers can have lasting impacts on the confidence and style of their state capital. Melbourne owes much of its reputation as a liveable European-style city to Hamer’s commitment to preserving its built heritage, expanding its parks and gardens, and developing its artistic life.

Tim Colebatch was a young journalist at the Age when Hamer’s premiership began, and he has drawn on his own reporting, including interviews he conducted at the time with Hamer and other key players. As a close observer of Australian political life over more than forty years, Colebatch brings a shrewdness of judgement to the biographical task, as well as a deep knowledge of Victoria’s political history. We can only understand Hamer’s historical significance, he makes clear, if we understand the rural-dominated politics that preceded him in Victoria, when country votes were worth twice as much as city votes and the Country Party regularly provided the premier. The Liberal Party, too, was dominated by rural members, led by Henry Bolte, the farmer who was premier for seventeen years.

Colebatch is very good on Bolte. With his round pug-like face and aggressively plain speaking, he is easy to caricature as a conservative buffoon or a loud-mouthed bully. But he was a very effective and pragmatic politician committed to developing Victoria after the torpor of Country Party domination. He is largely remembered today, though, for his determination to hang Ronald Ryan — who became the last man in Australia to be executed by the state — in the face of huge protests. Hamer was one of three members of the cabinet to vote against it, though at the time his dissent was subdued, subordinated to his loyalty to the leader.

Hamer’s habits of loyalty were learned during his six years in the Australian army, and Colebatch argues convincingly that these years of war service were crucial to his later political success. He was born in the inner-eastern suburb of Kew, in the heartland of Melbourne’s professional middle class, was educated at Melbourne and Geelong Grammar Schools, and studied law and arts at the University of Melbourne in preparation for joining his father’s law firm. At university he mixed with other young men from Melbourne and Geelong Grammars and went to parties and dances with their sisters and cousins. It was a small, interconnected social world, its comfort and pleasures little affected by the depression that had blighted the lives of so many other Australians.

The war changed all this, taking Hamer into a broader social world where he mixed for the first time with men from working class suburbs, farms and country towns. Although he supported appeasement of Germany, as a member of the army reserves he knew that if war came he would go. In December 1940 he sailed to the Middle East with the 2/43rd Battalion as a lieutenant with thirty men to command, leaving behind the young woman, April Mackintosh, he was soon to marry. Hamer’s analytical and organisational skills largely kept him away from the front line, and were rewarded by his promotion to the level of major.

Dick and April married during the war, and he came back after almost six years of service to a child he had never seen. Like so many other young couples they relished the tasks of peace after the sacrifices of war, building a home and raising a family. Dick returned to his father’s law firm, but he was also inspired by the revival of liberalism in the newly formed Liberal Party and the challenge of keeping socialism at bay and protecting, as he saw it, the freedoms he and other men had fought for. He joined the Liberal Party and in 1956 won the Legislative Council seat of East Yarra. A seat in the Council was a part-time job in a part-time chamber, which he could combine easily with his law practice. He became a cabinet minister in 1962, and in 1963 he was appointed local government minister, which, he decided, included responsibility for planning Melbourne. He created the green wedges separating urban growth along transport corridors from farms and parkland between, and developed a network of regional parks for the recreational enjoyment of people living in the fast-expanding suburbs. Refusing an invitation from Menzies to transfer to a federal seat, he transferred to the lower house seat of Kew so that when Bolte retired he would be able to succeed him, which he did in August 1972.

Colebatch lists the initiatives that immediately followed the change at the top. Hamer began negotiations with the other premiers for trials of daylight saving, began to dismantle Victoria’s censorship regime, and lifted a ban on women serving in the senior levels of the public service — not quite as dramatic as releasing draft dodgers from prison, or initiating the recognition of communist China, but enough to mark a regime change.

Hamer’s first years as premier were his most effective. The Victorian Conservation Trust quietly bought up land for parks and conservation, and the Historic Buildings Act preserved much of Melbourne’s Victorian-era heritage. Hamer became arts minister, Victoria’s first, and oversaw a golden decade in arts funding. Many of his priorities were shared by the Whitlam government, and between 1972 and 1975 the state benefited from federal money to improve schools, buy land and public buildings, and reduce the number of unsewered homes. Hamer made it happen, and his popularity increased. He also abolished capital punishment through a private member’s bill he introduced himself. Tellingly, half the Liberal MPs voted against it, with country MPs  opposing the bill three-to-one.

It was an ominous sign. The new politics of Whitlam and Hamer was not sweeping the entire nation before it, and powerful pockets of resistance were building. And when Kerr dismissed Whitlam, Hamer’s centrist style of politics received a severe setback. Malcolm Fraser’s confrontational tactics in precipitating the crisis went against all of Hamer’s cautious, ameliorative instincts and he privately advised Fraser against blocking supply. As a loyal team player, however, he campaigned for Fraser at the subsequent election. During the campaign, backs were turned on him at a Musica Viva concert, and his son-in-law reported him as saying, “That man” — Fraser — “has no idea what damage he’s done.” One of the things that was damaged was the possibility of bipartisan cooperation for reform. And Fraser eventually ended up as one of its casualties, too, as the Liberal Party moved rightwards and power shifted from Melbourne’s courteous traditions of Deakinite liberalism to Sydney’s rougher and more populist politics.

Hamer’s premiership became more troubled after about mid 1976. The reforming impetus continued, with the Equal Opportunity Act and the decriminalisation of homosexuality, but conservatives in the party were increasingly unhappy, particularly with new planning laws and heritage protections that frustrated development. This is a perennial conflict in state politics, and one all state governments find hard to manage. Party unity started to crumble, the cabinet to leak and the impression to grow that Hamer was losing control. Compounding his difficulties was the deteriorating economy, and internal party critics were criticising his lack of focus on economic development. In this they were not entirely fair. Under the spell of the young tourist entrepreneur Sue Calwell, Hamer embraced the vision of Melbourne as a destination for international conventions. But for this Melbourne needed a world-class convention centre, and to make it economically viable, a casino as well. Hamer was early in seeing tourism as an economic driver for the city, but he was not able to get the casino through the party room.

He won a third term in 1979, but with Labor looking more and more like an alternative government and younger Liberal members, led by Jeff Kennett, pushing for more say, his grip on the government was slipping. Early in 1981, after a leaked letter from Kennett highlighted disunity in the government, the Warrnambool Standard published comments by Ian Smith, the economic development minister, describing Hamer as “a far left-wing leader” whose commitment to democracy prevented things getting done. Faced with such outrageous public disloyalty, Hamer resigned in the interests of unity.

Colebatch asks a question he thinks will puzzle many of today’s readers. Why was a man as liberal and tolerant as Dick Hamer, with such a strong commitment to the environment and the arts, a member of the Liberal Party? The question itself is evidence of how the Liberal Party has changed since the 1950s and 1960s, when it was the natural home of “the moral middle class,” those educated men and women who believed in active citizenship, supported the arts, wanted the environment conserved and thought that the state should support everyone’s opportunity to develop his or her full potential. Colebatch has done us a great service in writing such a readable and well-researched biography of the premier who, in his commitment to public service, his vision for Victoria and his unfailing courtesy, represented the best of the tradition that had shaped him. •

Judith Brett is a political historian. She is currently writing a biography of Alfred Deakin.

How did an ill-resourced staff, working in difficult surroundings under extreme pressure, preserve harmony, discipline and a shared sense of purpose? Evan Williams recalls his days as Whitlam’s speechwriter

The PM and the press: Gough Whitlam talks to journalists. Undated photo by Michael Jensen/National Library of Australia 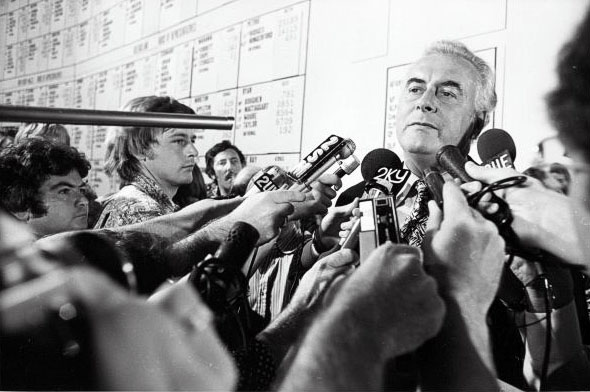 The PM and the press: Gough Whitlam talks to journalists. Undated photo by Michael Jensen/National Library of Australia