How Labor’s millstone became a bastion

It’s the party that changed, rather than Victoria, writes Paul Strangio 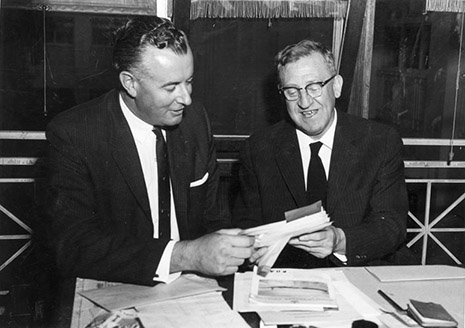 Labor new and old: Deputy leader Gough Whitlam (left) with party leader Arthur Calwell, who was the member for Melbourne for more than three decades. National Archives of Australia

THROUGHOUT much of the post-war era, including the “swinging” sixties, federal election night in Victoria resembled Groundhog Day. In election after election Labor’s wins were confined to the same ten seats – concentrated in Melbourne’s industrial suburbs – giving it a meagre 30 per cent of parliamentary representation in the state.

The culmination of this sorry state of affairs was the 1969 federal election, when Gough Whitlam brought Labor agonisingly close to government on the back of a huge national swing. The reason Whitlam fell short – and why celebrations turned sour for Labor supporters in Don’s Party, David Williamson’s famous dramatisation of election night that year – was yet another poor performance by Labor in Victoria. By the end of the 1960s, many people in the federal party rightly believed that the state was the chief impediment to their winning national office.

How things have changed. Wind forward to 2010 and opinion polls indicate that Victoria is the state most likely to thwart Tony Abbott’s bid to become prime minister. Victoria is now being tagged in election coverage as the “left-leaning” state and a “Labor bastion.”

While this strong support for Labor inverts the longer-term pattern of electoral behaviour in Victoria, it’s doesn’t actually deviate from the trend. Victoria has been metamorphosing into a Labor state for three decades. If, as seems inevitable, the party gains a majority of the state’s two-party preferred vote this Saturday, it will be the tenth time it has done so in the twelve federal elections since 1980. And in most of those elections (and this is set to be repeated) Victoria has been Labor’s best performing mainland state measured by two-party-preferred vote.

When I’ve pointed to this phenomenon previously, some correspondents have cynically suggested that it’s because Labor and non-Labor are now indistinguishable. Party transformation is certainly an important part of the story of Victoria’s changed electoral behaviour, but not as these correspondents assert.

Yes, the parties have converged and there is an undercurrent of disillusionment with Labor’s ideological shift to the centre and an attendant haemorrhaging of left-leaning supporters to the Greens. But most research shows that voters can still distinguish between the major parties – believing, for example, that Labor is better than the Liberals at delivering on “social” policy issues like health, education and the environment.

The contention that Labor’s recent electoral success in Victoria is the product of a new-found pragmatism and philosophical neutering often comes with nostalgia for a golden past. Yet there was little to mourn about the passing of the old Victorian Labor Party. For much of its history, Labor in Victoria was a Trades Hall–dominated party, ideologically hidebound and often only obliquely interested in winning executive office. Its woes were magnified in the postwar era by the legacy of the mid-1950s split in the party, which not only robbed it of a large part of its traditional Irish-Catholic constituency but also left it demoralised and antagonistic to fresh thinking of any kind.

The great change in the Victorian party came with federal intervention in 1970. Labor was significantly “middle-classed,” gaining some belated policy energy and electoral sensitivity. The effects of intervention were not confined to Victoria, and were an important milestone in the modernisation of Labor more widely.

It is not only Victorian Labor that has undergone change. In the 1980s, the state Liberal Party purged much of its social–liberal wing. It forgot the teachings of the great Liberal prime ministers from the state, Alfred Deakin and Robert Menzies, that the party must remain a progressive force, err towards liberalism not conservatism, and balance the creed of individualism with a positive view of government activity. Over the same period, the geographical centre of the Liberal Party in Australia has shifted from Victoria to New South Wales, accentuating the rebalancing to conservatism.

Other factors, including demographic changes, have influenced the mutation of Victoria’s electoral behaviour, but the sum of these party transformations has clearly been important. Put simply, modern Labor appears better attuned to the progressive traditions of Victorian politics, which stretch back to the nineteenth century.

Of course, attempting to define a state’s political culture is perilous. Nevertheless, few would fail to recognise in Victoria a metropolitan-dominated cosmopolitan culture that distinguishes it from some other Australian states. Victorians care about bread and butter and issues and want to see the economy soundly managed, but once they’re assured of that then they appear to have a greater openness to progressive politics. It’s notable that the major interruption to Labor’s ascendancy in Victoria during the past three decades was in the early 1990s when the financial scandals that engulfed the state Labor government provoked punishment at the 1990 federal election and the 1992 and 1996 state elections.

Federal elections aren’t won in a single state. Much commentary during this election has bemoaned Labor’s lack of principled leadership on issues like climate change and asylum seekers and suggested this is a cause of its troubles. Yet the regional variations in the polls cloud this interpretation. Progressive Victoria is largely sticking with the government while the “conservative” states are rebelling. Which raises the uncomfortable question of whether the Labor government would have been still more vulnerable if it had been forthright on issues close to progressive hearts. •

Paul Strangio is a senior lecturer in politics at Monash University.

Who’ll win, and by how much 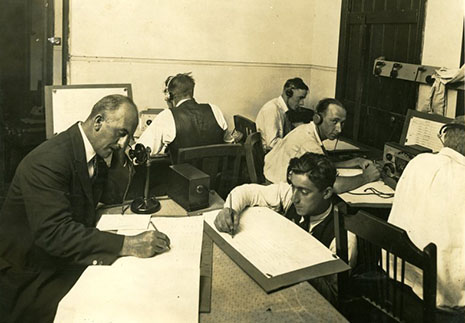