How not to feed America

Has the Trump administration turned the pandemic into a food crisis? 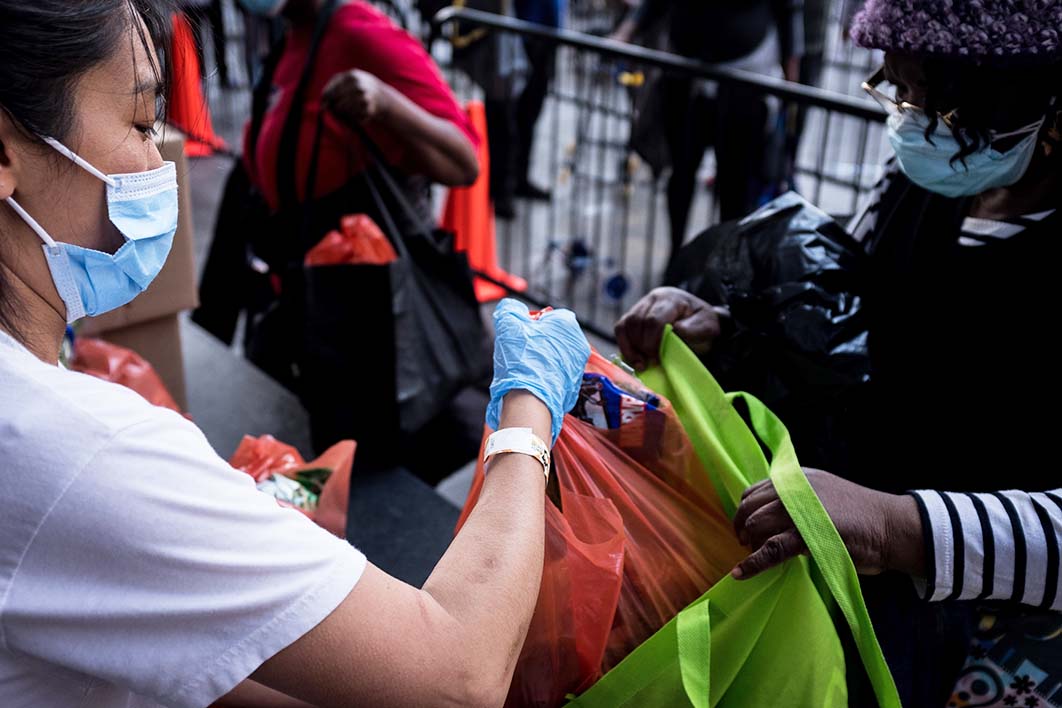 Life returning to normal? A volunteer helps a woman pack her bag at one of New York’s food banks. Alba Vigaray/EPA

The Covid-19 crisis is subsiding in America’s major cities and the nation is beginning to open up, but the Trump administration’s response to the pandemic has left behind at least one time bomb: a looming food supply crunch. The meat and poultry industry has already been badly disrupted by Covid-19 outbreaks at processing facilities around the country; now, as the summer fruit and vegetable harvest season approaches, the virus is spreading among seasonal farm workers. Food is reportedly being dumped even as queues for food banks are lengthening.

The situation is likely to worsen. As restaurants reopen, and with much of the population expecting a return to normal, food shortages and rationing could provoke civil unrest. Yet the Trump administration has no evident plan — indeed few ideas of any kind — for tackling food supply pressures that are hitting the president’s own red state constituencies hardest.

The problems began emerging in April among the unsanitary and often unsafe meat and poultry processing plants in rural towns, especially in the Midwest and Great Plains. Two of the ten US facilities with the highest rates of coronavirus infection are the meat processing works in Sioux Falls, South Dakota and Waterloo, Iowa (seven of the other eight are prisons).

With meat processing companies reluctant to release their data and not legally required to do so, up-to-date official statistics are hard to come by. The most recent report from the Centers for Disease Control and Prevention, dated 8 May, covers outbreaks in processing plants during April, by which time Covid-19 cases had been reported in 115 plants in nineteen states. Many of these plants were shutting down.

Not surprisingly, meat and chicken supplies quickly ran short on supermarket shelves. The consequent panic buying was aggravated on 26 April when Tyson Foods, one of the country’s largest meat producers, placed a full-page advertisement in major Sunday newspapers warning that “the food supply chain is breaking” and “millions of pounds of meat will disappear from the supply chain.”

The Trump administration responded with uncharacteristic speed. Just two days later, the president invoked the Defense Production Act and signed an executive order declaring meat and poultry processing an essential industry and forcing plants to remain open “to ensure a continued supply of protein for Americans.” The companies were happy to comply — the executive order shields them from any health or safety liability — and most workers were unable to resist demands to return to what is often the only work available, despite a continuing lack of protective equipment and health safeguards.

Just three companies (Smithfield, Tyson and JBS) account for two-thirds of the US beef market. This degree of consolidation is also evident at plant level: most processing facilities employ thousands of workers, and closing just one of them can result in more than ten million fewer beef servings a day.

Working in a processing plant is one of the most dangerous of American jobs, and the plants have a history of exploiting and abusing workers in the rural areas where they are major employers. Facilitating the exploitation is the fact that many of the workers are immigrants, often undocumented.

The pandemic seems to have opened another chapter in this nasty history. The Guardian recently revealed how negligence, secrecy and mismanagement at poultry processing facilities in Georgia, Arkansas and Mississippi operated by some of the largest food manufacturers have allowed the coronavirus to spread.

Since Trump’s order to reopen, and despite improved infection control procedures in some but not all workplaces, the number of cases tied to the plants has increased dramatically. Local health authorities are often reluctant to push major employers by mandating testing and isolation procedures. The governor of Nebraska has said his state will not disclose the numbers of coronavirus infections in specific meat plants without the consent of the companies.

Data collection by the Midwest Center for Investigative Reporting shows that 20,400 infections had been recorded across 216 plants in thirty-three states by 8 June, and at least seventy-four workers had died. In April, only five of Tyson Foods’ facilities had infections; now, twenty-four have reported outbreaks, with more than 7000 workers infected. The problem extends beyond meat and poultry to processed-food facilities and farms and ranches. According to data collected by the Food and Environment Reporting Network, by 8 June at least 282 meat packing and food processing plants, and thirty-nine farms and production facilities had confirmed cases of Covid-19.

It’s easy to see how a very infectious virus can spread under the conditions at these plants, and it’s easy to see how this affects the communities in which these plants are located. Counties with or near meat processing plants have almost twice the rate of known coronavirus infections as the national average. In some cases the figures are much worse: the Tyson Foods plant in Dakota City, Nebraska, has 786 positive cases (about 17.5 per cent of the 4500 workers and contractors it employs), and surrounding counties in Nebraska, Iowa and South Dakota together average 1000 cases per 100,000 population compared with the national average of 199 cases per 100,000.

These cases fit into a surge of coronavirus infections in rural areas since May. Now, the counties with the highest numbers of cases on a population basis are in Tennessee, Nebraska, Minnesota, Iowa, Kansas and Oklahoma, as well as in the rural areas of southern states like Georgia, Mississippi and Texas. All are areas that rank highly on the CDC’s social vulnerability index. Outbreaks have been further fuelled by the decision of many Republican jurisdictions not to close down public activities, and the failure of people in conservative farming communities to use preventive measures.

Around sixty million people live in rural America, including as many as 2.7 million hired farm workers. They are older and poorer than their urban counterparts and have higher rates of diabetes, obesity and other health problems. In many places the local healthcare system is already stretched thin, and even a minor surge in patients is enough to overwhelm small hospitals that often lack intensive care units and ventilators.

The coronavirus infection has arrived just as the summer harvest season is starting. Fruits and vegetables are still largely picked by hand, an undesirable job that is generally taken on by immigrant workers, roughly half of whom lack legal immigration status. These transient workers live in crowded and substandard housing and often speak little English. Time off for illness means lost pay. The Trump administration’s public charge rule means that even legal migrants are unable to access healthcare and other government benefits.

Bloomberg News reported on 30 May that all the 200 workers on one Tennessee farm tested positive for coronavirus and that Washington’s Yakima County (which produces apples, cherries, pears and hops) had the highest per capita infection rate of any county on the west coast. More than one hundred migrant workers at two large produce operations in New Jersey had contracted the virus.

No concerted government reporting or prevention effort is apparent, despite these workers being essential to America’s food supply. The Covid-19 outbreaks are creating labour shortages at the worst possible time, and many fruit and vegetable crops are being left to rot in the fields.

Those shortages compound the pandemic’s impact on the food supply chain. With cafes, restaurants, hotels and schools shut down, and many people reluctant to shop in supermarkets and farmers’ markets, many producers lost their markets. Dairy producers have been dumping large quantities of milk, and growers have been unable to get fresh produce delivered. Now, just as venues are reopening, further supply interruptions are likely to lead to shortages and increased prices.

All this means that the rate of food insecurity in the United States, especially among households with children, is unprecedented in modern times. A Brookings Institution study drawing on two national surveys in late April found that more than one in five households, and two in five of those with children under twelve years of age, were experiencing food insecurity. The incidence of hardship — as measured by respondents who reported children not eating enough because the household lacked the means to buy food — has increased more than fourfold since 2018.

In New York City an estimated two million people face food insecurity. City officials are planning to begin delivering more than a million free meals a day under the supervision of a “food czar” appointed by mayor Bill de Blasio.

The Trump administration and a number of Republican-governed states have made things worse by trying to limit access to the Supplemental Nutrition Assistance Program (SNAP, formerly the Food Stamps Program), depriving many children of free or inexpensive school meals. With cars and people queuing for miles, food banks are under extraordinary pressure. According to the hunger relief organisation Feeding America, the number of people served at food banks is up by more than half on a year ago and about two in every five people are seeking foodbank help for the first time.

There are no simple solutions to the waste and the need. Growers already reeling from huge losses in sales say they need help to meet the costs of harvesting, packing and transporting their crops to food banks. And the food banks aren’t set up to be warehouses for such vast quantities of perishable food.

The US$2 trillion coronavirus stimulus package provides for US$23.5 billion in assistance for farmers, to be allocated by agriculture secretary Sonny Perdue. Concerns that the administration will use this money to shore up Trump’s support among farmers in electorally pivotal Midwestern states seem justified by the skewed distribution of US$28 billion in aid to farmers to offset Trump’s trade war with China.

The stimulus package also provides the agriculture department with a further US$25.1 billion for food aid programs for poor families, including US$850 million for food banks. To date, despite the unprecedented demand, less than US$300 million has been sent out.

Together, these problems encapsulate all that the United States has become as a result of Donald Trump’s mismanagement of the pandemic: essential workers are infected and dying in unacceptable conditions; food is wasted while American children go hungry and city supermarkets ration purchasing; and some rural livelihoods and lives are wrecked while others benefit from pork-barrelling. •

“The gravest economic crisis since the end of the war”

What can we learn from Britain’s three-day week? 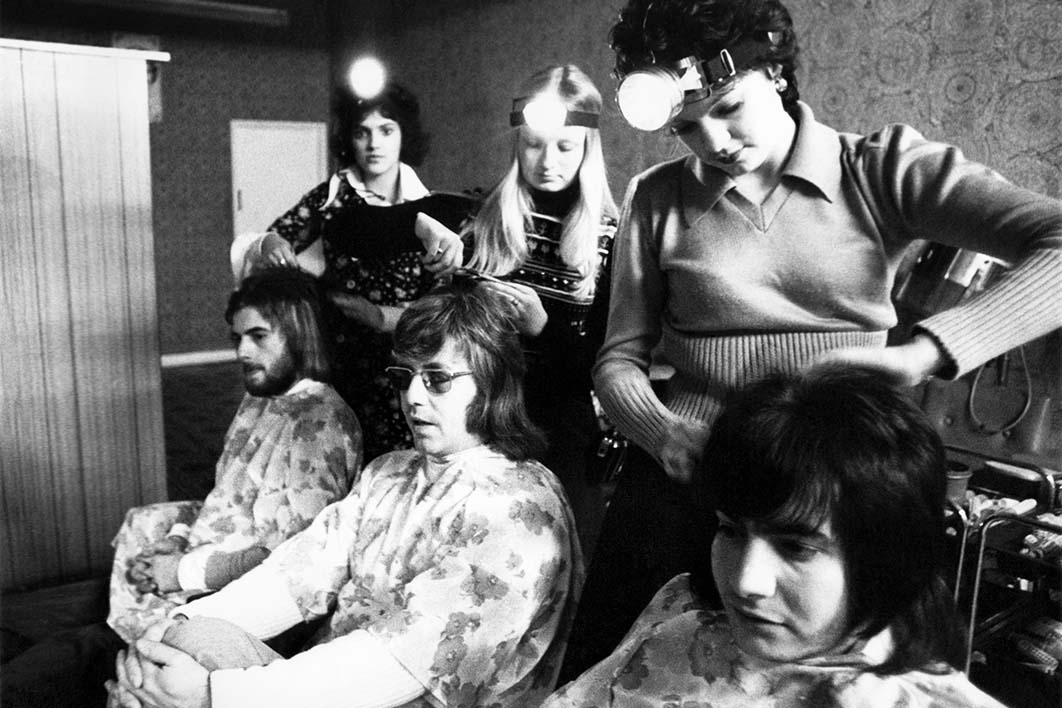