How to break the people smugglers’ real business model

Both the government and the opposition are focusing on the wrong problem, writes Anne McNevin 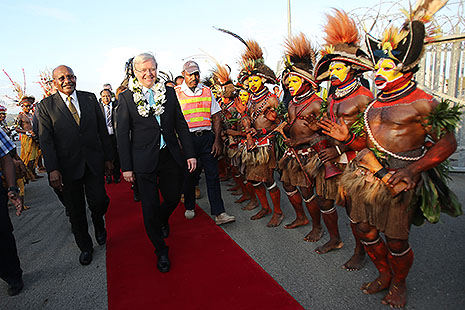 THE federal government claims that its new asylum seeker policy – the PNG solution – breaks the people smugglers’ business model. Anyone smuggled by boat to Australia will be removed to Papua New Guinea for processing and won’t be resettled in Australia. People smugglers will no longer be able to sell their product – the prospect of living in Australia – to prospective customers. Without a product to sell, the smuggling will stop, and so will the tragic deaths at sea.

Many commentators have accepted this logic, even if they differ on the rights and wrongs of leaving asylum seekers stranded in Papua New Guinea. But is the logic sound?

The policy rests on a misunderstanding of the product being sold. The product that asylum seekers want and that people smugglers offer is passage to a place where real protection is possible. By real protection, I mean the chance to live somewhere – anywhere – free from persecution and able to rebuild a dignified life. This is not necessarily the same as seeking a life in Australia. The problem is that Australia, at present, is one of the few countries in the region where real protection is possible – a point I’ll return to shortly.

If the majority of people embarking on perilous sea voyages were economic migrants – as foreign minister Bob Carr suggests – then the government’s logic would hold. The prospect of a long wait in Papua New Guinea wouldn’t deliver the economic opportunities that come with a life in Australia. Economic migrants would not get on boats. But according to the government’s own statistics, over 90 per cent of asylum seekers arriving by boat in recent years have been genuine refugees, seeking real protection.

When two Hazara asylum seekers, Mohammed Reza and Mohammed Ali, were interviewed on Radio National this week they bluntly stated that ten years’ detention in Papua New Guinea was still a better prospect than certain death in Pakistan, where they are ruthlessly pursued by the Taliban. For these men and many like them, protection, even in its harshest form, is still an improvement on fearing for your life.

So why has the prospect of real protection become something that smugglers can trade in? Smugglers take advantage of the fact that for people who urgently flee their countries, there are few if any lawful means to travel to places where real protection is possible – or, at a minimum, to travel to places where they can be fairly processed with a reasonable prospect of resettlement elsewhere.

Asylum seekers who transit through Indonesia and Malaysia, for example, may languish there for years before resettlement places are found. During that time – even as refugees – they are vulnerable to arrest, imprisonment and, in some cases, corporal punishment. They are unable to work or to support themselves or their families. For Reza and Ali, being sent to Papua New Guinea was also a better prospect than waiting in Indonesia (where Ali currently is), where neither food and shelter nor a pathway to real protection can be guaranteed. The only route to real protection means getting on a boat.

Smugglers exploit the gap between the hope for protection and surrounding governments’ refusal to provide lawful means of transit. The market for the product being traded by smugglers is created by the combination of that refusal and the absence of genuine protection options in transit countries.

What would it mean, then, to genuinely break the smugglers’ business model? It would mean closing down the market in protection, and there are two ways to do this.

The first is to abandon the principle of protection altogether. This would mean withdrawing from the Refugee Convention and several other international legal instruments that currently oblige Australia to hear protection claims from asylum seekers, to provide for their basic needs and rights during that process, and not to return them to places where they face persecution. If Australia refused to provide protection in any form, then the smugglers would indeed have nothing to trade in.

Unless, of course, they started smuggling people to New Zealand. If New Zealand followed suit, and likewise withdrew from its current legal obligations, asylum seekers would seek an alternative destination and smugglers would find one. The end-point would only come when every country abandoned the principle of protection. The upshot would be that people fleeing their countries in fear of their lives would have no prospect of real protection anywhere. To be sure, there would be fewer deaths at sea on our borders. But the deaths would take place in source and transit countries, out of our immediate sight.

The second way to close down the market in protection is to make protection available for those who genuinely need it. If protection is provided as a matter of course, in situ, then the smugglers lose their vital middle-man status. This option would mean reframing our entire policy approach away from deterrence and towards the effective provision of protection regionally.

Currently, Australia and New Zealand are the only countries that have the capacity (legal, financial, and technical) to offer real protection in our region. Hence the boats come here. Arguably, this places an unacceptable burden on Australia and New Zealand. So any sustainable provision of protection must be regional in order to work. This means a long-term, collaborative project of building capacity and sharing the costs of processing and resettlement right across the region. A well-resourced and rigorous regional process would reject specious claims from economic migrants, just as the Australian system currently does.

Australia is fully committed to neither of these options. Both the government and the opposition remain committed to deterrence – stopping the boats coming in one way or another. Both sides are thus perpetuating the wrong conversation – how to stop the boats – rather than addressing the reasons why the boats come in the first place.

The boats come because of the hope for protection. Deterrence in the form of the PNG solution, or its Pacific alternatives, does not extinguish that hope. It simply delays indefinitely the provision of protection under conditions that prolong and exacerbate the suffering of some of the world’s most vulnerable people.

Deterrence also sends the wrong message to our neighbours. If Australia outsources its protection obligations to developing states like Papua New Guinea, then why should other states in our region commit to a regional process that distributes costs and responsibilities equitably?

I do not believe that politicians on either side of politics seriously want to extinguish the hope of protection that refugees rightly hold. Nor do I believe that they want to prolong suffering or cause deaths. If I’m right about that, then all of us must redirect our intellectual, financial and diplomatic resources to the long-term task of sustainable regional protection.

Kevin Rudd’s announcement of a regional summit to address these issues is laudable in this respect. But unless the agenda is explicitly framed around protection rather than deterrence, we stand little chance of breaking the people smugglers’ real business model or developing humane and sustainable asylum-seeker policies. •

Anne McNevin is a Lecturer in Politics and International Relations at Monash University.

In a second article, Anne McNevin outlines the main features – and benefits – of an alternative to the Labor–Coalition deterrence consensus

Anne McNevin is an Associate Professor in the Department of Politics at The New School for Social Research in New York.