How to help farmers to help the reef

Reef Rescue needs to focus on measures that really do improve water quality, says Amanda Cornwall. That means learning from other successful schemes 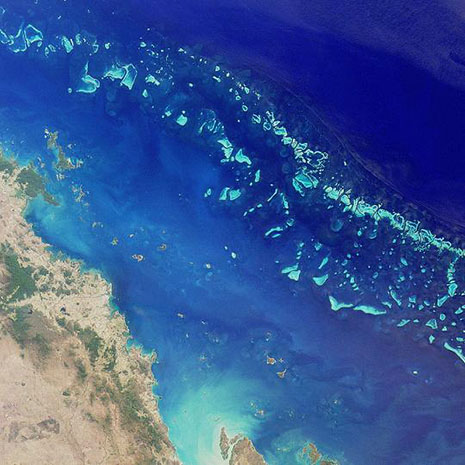 Too little, too late? A satellite image of the Great Barrier Reef.
NASA

LABOR and the Coalition are promising an extra $200 million to tackle the agricultural pollution threatening the Great Barrier Reef. But unless they direct the money to the most effective actions to help the reef it could all be too little, too late.

The federal government launched the $200 million Reef Rescue program in 2008 to help fight outbreaks of coral-eating crown of thorns starfish and declines in coral and seagrass. Nitrogen fertiliser, mainly from sugar cane farms, is linked to the starfish outbreaks. Sediment washed into the reef from farms blocks light and smothers coral and seagrass and adds to the nitrogen load.

The rescue program provided information and grants to farmers in the reef catchments to help them adopt farming practices that reduce chemical and sediment pollution. After the first five-year funding period expired earlier this year, the government announced a further $200 million, and in May the Coalition matched that commitment.

A big priority was to get large numbers of farmers on board, and in this regard the program succeeded, with some 3200 farmers making improvements to their land-management practices since 2008. The program made good progress in reducing water pollution, too, but fell short of targets set in the joint federal and Queensland government 2009 reef plan. A recent reef report card found that the annual load of nitrogen entering the reef fell by 7 per cent and pesticides by 15 per cent between 2009 and 2011. The target was a 50 per cent reduction by 2013. The reduction in sediment was better, at 6 per cent compared to a target of 20 per cent by 2020. The report found increased outbreaks of the crown of thorns starfish – driven by fertiliser pollution – and declining hard coral and seagrass cover.

When the federal and Queensland governments announced a revised reef plan on 10 July the 2013 targets were pushed back to 2018. A scientific consensus statement released on the same day said the poor results were due to the unprecedented cyclones in 2010–11 and that more time is needed for farmers’ actions to deliver results. But time is not on our side. More intense cyclones and more frequent flooding are predicted.

Starfish damage is one of the most important factors contributing to the declining health of the reef, and it’s the only one that’s readily controllable, according to the Australian Institute of Marine Sciences. The government could vastly increase the effectiveness of future grants by giving priority to actions that reduce chemical fertiliser pollution rather than subsidising changes in practice across the whole sector.

Six natural resource management bodies between Bundaberg and Cape York are responsible for administering the Reef Rescue water quality grants under contracts with the federal government. They’ve played a crucial role as independent brokers between government, farmers and industry groups. The government also enlisted peak industry bodies such as AgForce, Canegrowers and Growcom, funding them to provide advice to farmers on better management practices and to develop industry benchmarks. The water quality grants provided subsidies for the expensive machinery and equipment needed to adopt better farming practices that reduce pollution.

Targeting farmers in pollution hotspots was a priority identified in CSIRO modelling commissioned to inform selection criteria for the grants. It found, for example, that 70 per cent of sediments entering the reef are generated from 20 per cent of the total catchment area. Large pollution loads come from relatively small areas of intensive agricultural production close to the reef.

In the first phase of Reef Rescue the funding bodies didn’t include pollution hotspots as part of their eligibility criteria for the grants. They invited all farmers in targeted sectors – sugar cane, horticulture, cropping and grazing – to apply for the grants in line with the goal of maximising participation rates. The funding bodies’ grant assessment process typically prioritised bringing poor performing farmers to the standard of industry best practice, again in line with federal government guidelines.

Reef Rescue has been backed by a remarkable scientific research and monitoring program, Paddock to Reef, jointly funded by the Queensland and federal governments. Scientists have worked with farmers to develop practices that deliver improvements in water quality. The research showed, for example, that if sugar cane farmers target fertiliser according to soil type and long-term yield records they can reduce the amount of fertiliser they need to use. In grazing, the research found that improving pasture by carefully matching stocking to available forage provides better-quality pasture, which means better vegetation cover, reduced sediment run-off, and higher long-term profits. The practices are proven to reduce water pollution and will generally reduce costs and improve productivity.

Two of the funding bodies used databases to help them apply the scientific information in Paddock to Reef, taking into account factors such as location and the condition of the land. The others relied on assessment panels, made up of local farmers or industry bodies, whose assessment criteria were not always strictly linked to the priorities identified by Paddock to Reef. A CSIRO study  found that these panels sometimes provided grants for practices that delivered productivity gains but little benefit for the reef.

Like other traditional grant managers, the Reef Rescue funding bodies believe talking to farmers only about chemicals and sediment won’t win hearts and minds. They’ve successfully worked with farmers to revolutionise the way they manage their land. But there’s room for improvement: according to the recent scientific consensus statement, the fundamental problem is that many farmers are still using too much chemical fertiliser. According to the statement, the new machinery funded by Reef Rescue will only help if farmers reduce fertiliser use.

Under conservation tenders, the funding body defines the environmental benefits it is paying for and works with interested farmers to develop property plans that deliver those services. The funding body then invites the farmers to lodge a tender setting out the price they want to be paid to undertake the actions in their plan. The funder can then choose the tenders that deliver the highest quality and quantity of environmental benefits at the lowest price.

For an environment tender to be successful, the funding body must have a robust method for measuring the environmental services provided by farmers. Because there are often gaps and uncertainty in the scientific research, this can be a contentious process. In the case of Reef Rescue, the Paddock to Reef program offers a wealth of information and sophisticated models that could support a credible competitive tender.

The importance of strong scientific backing was evident in some early pilots of competitive tendering for water quality grants between 2005 and 2008, which included a Reef Rescue tender in the lower Burdekin in 2008. Despite the limitations, the four pilots demonstrated the benefits of using competitive tenders. A 2009 Australian National University study, which compared the results of the water quality tenders with traditional grant assessment methods, found that the pilot tenders revealed the most cost-effective actions farmers can take to deliver water quality benefits to the reef. It also found that cost-effectiveness varied widely depending on the sector, the location and the producers. The authors concluded that subsidising all farmers to support widespread changes in industry practice is far less effective for the reef.

Not surprisingly, cost-effectiveness and competitive tendering aren’t a feature of the major parties’ election policies, but they’re both committed to addressing the threats to the reef. The government’s policy broadens the scope of Reef Rescue so that it covers managing wetlands and riparian areas, and urban water runoff, along with reducing agricultural pollution. It’s a strategy to address all aspects of a healthy catchment, which is important for a healthy reef. The government has earmarked $61 million of the $200 million for Reef Rescue for water quality grants to landholders. The Coalition disagrees with the government’s priorities and says a better approach is to increase incentives to farmers, although they haven’t put a figure on it. They’ve promised a thirty-five-year Reef 2050 plan, and to work with the Queensland government on reducing runoff.

The Queensland government’s strategy is to support peak industry bodies to encourage farmers to voluntarily adopt industry best practice. Last year it suspended regulations introduced by the former government in 2009, which focused on pollution hotspots and fertilisers. It required sugar cane farmers in priority locations to use no more fertiliser than recommended by industry best practice. Graziers and cane farmers on larger farms in priority areas were required to submit environment plans with steps to reduce pollution, and to report their progress each year. Now the industry-led programs are the only mechanism to minimise chemical fertiliser use, which is crucial for future reef rescue subsidies to be effective in reducing pollution to the reef.

The party that wins the election should make that Reef Rescue funds are spent in a way that delivers the best results, at the least cost, for the reef. • 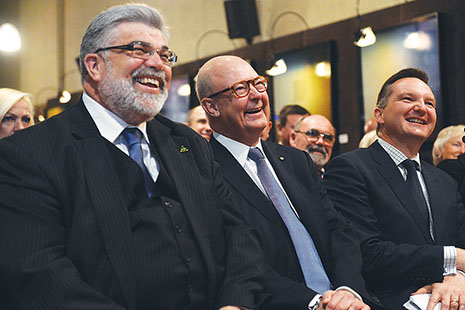