The PM knows that voters have a simple question in mind when they enter the polling booth, writes Peter Brent 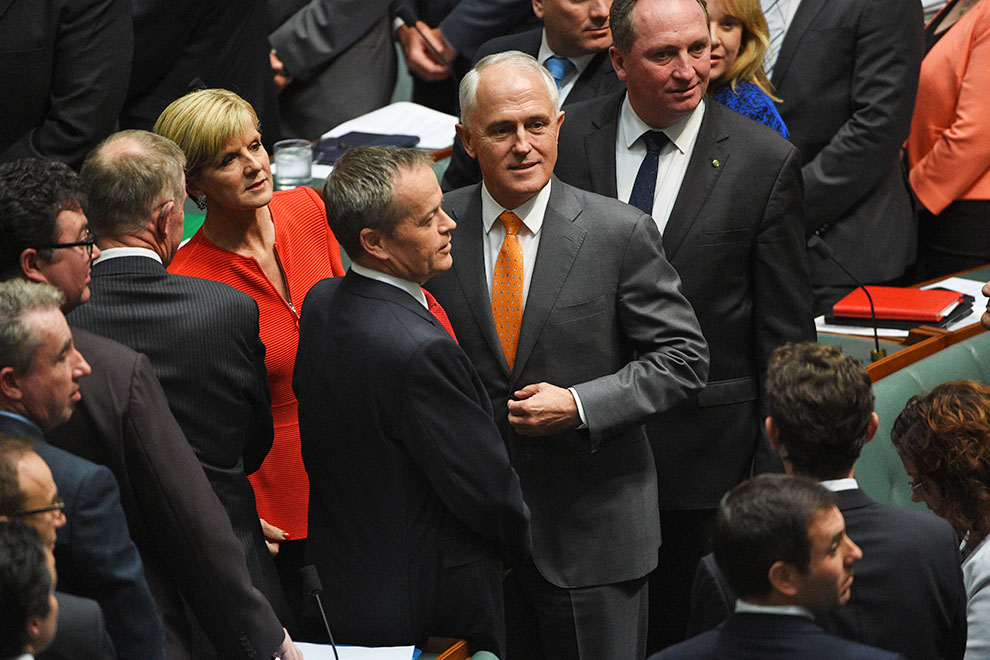 The latest edition of Tony Abbott’s “no sniping” tour, on Monday night, saw the former prime minister explain to Sky News that it’s “very easy” for him “to campaign for the Turnbull government.” That’s because the Turnbull government “is running on the record of the Abbott government, and that makes me a very enthusiastic supporter.”

Self-indulgent and deliberately unhelpful to his colleagues, Abbott was also employing a faulty premise.

Elections are not about the past; they are about the future. That might sound like a cheap slogan, but it accurately describes what people carry in their minds when they cast their votes. The past can be a useful pointer to what might happen from the day after the poll, but rewarding governments (or oppositions for that matter) for earlier accomplishments is low on the list of voter motivations. This is one reason why there is so much negativity in campaigning – it’s designed to scare electors about what might happen if the other side somehow won office.

This political-reporting week began with a Newspoll that had the government ahead in voting intentions, and up a little on last fortnight, by 51 to 49 per cent after preferences. But the Australian’s report on the poll led with Malcolm Turnbull’s declining approval ratings, and as always those leading paragraphs were picked up by ABC radio and other media.

“Turnbull in freefall” was shaping up as the meme of the day when it was arrested mid morning by the prime minister’s dramatic press conference, with its explicit, combative language. For something that had been widely anticipated, in generalities if not specifics, the announcement that he would bring parliament back early, and dare the Senate to once again block two union-targeted bills using the threat of a double-dissolution election fundamentally changed the dynamic.

The dynamic in the political reporting, that is – the narrative sphere, whose inhabitants sometimes mistake the things they write and say for sentiment in the outside world. Malcolm has taken control, the sphere’s inhabitants decided. He is now a man of determination, conviction and, perhaps, strategic genius.

Until this week, after a few 50–50 opinion polls, the political word had been that the Turnbull balloon was fizzing increasingly loudly, the federal opposition had seized the agenda, and opposition leader Bill Shorten was growing in stature. Now that’s been swept away, unlikely to ever return. We’ve entered a de facto election campaign, and the start of a campaign always sees a change in the apparent terms of engagement.

So much for the storytelling bubble. What about voterland, where people don’t pay much attention to politics but amble every few years to a polling station to participate in the democratic ritual?

The theatrical demands of political commentary tend to cast politics as a performance, after which voters hold up score cards. These depictions prioritise derring-do, triple pikes, momentum and cut-through. But it’s more realistic to conceive of voters asking themselves a simple question at the ballot box: do we want to reinstall the incumbent for another three years? If we are of a mind to change, is the opposition safe, or will it make a mess of things?

Mark Latham, the least successful opposition leader in recent times (Labor’s 2004 result was the worst for any opposition since 1977), certainly fulfilled the requirements of the three-act drama – even forcing prime minister John Howard into a humiliating backdown on politicians’ superannuation. But when it came time to vote most people found him too frightening.

Turnbull had lofty ambitions for the prime ministership but he has learnt on the job. He knows that any government’s re-election comes in large part from campaigning on the dangers of the other side. Witness Monday’s 7.30 interview with Leigh Sales, in which he repeatedly returned, unprompted, to the horrors a Shorten government would inflict on the country.

Assuming a 2 July election, how might the next three-and-a-half months pan out? One unknown will come from any manoeuvres that flow from the advice on constitutional law received by non-government senators. We will learn then how airtight Turnbull’s cunning plan really is.

Another wild card will be the Abbott problem. But those dangers, with their echoes of Rudd’s destabilisation campaign, are overstated. Received history exaggerates the impact of the Labor leaks during the 2010 campaign. Julia Gillard’s support was destined to decline (and in fact was already declining) thanks to Labor’s deliberately hollow election strategy. Gillard’s mistake was to run as a non-incumbent – as another opposition leader.

There’s a risk that Abbott will attempt to cruel his party’s chances this year, but if he does then few of his colleagues will rush to his defence. Such a strategy would damage the former prime minister more than the current one.

So who’s going to win? In my humble opinion (and no, I haven’t succumbed to this week’s Turnbull-mania), the mid-point expectation of the result, double dissolution or not, is a big Coalition victory – say, eighty-five House of Representatives seats out of 150, down from ninety in 2013 (or, according to Antony Green, eighty-eight after redistributions).

Then the fight for the heart and soul of the Liberal Party will begin.

On the weekend, cabinet secretary Arthur Sinodinos unwisely ruminated on national television about Turnbull’s elevated stature in the party room once he has an election under his belt. The conservative counterattack has already been launched, with mutterings that any gains at all by Labor will represent a repudiation of last September’s leadership change.

That sets a very high benchmark for Malcolm Turnbull. •