In search of the “sensible centre”

What if we took the leaders at their word? Tim Colebatch looks at the initiatives that might result 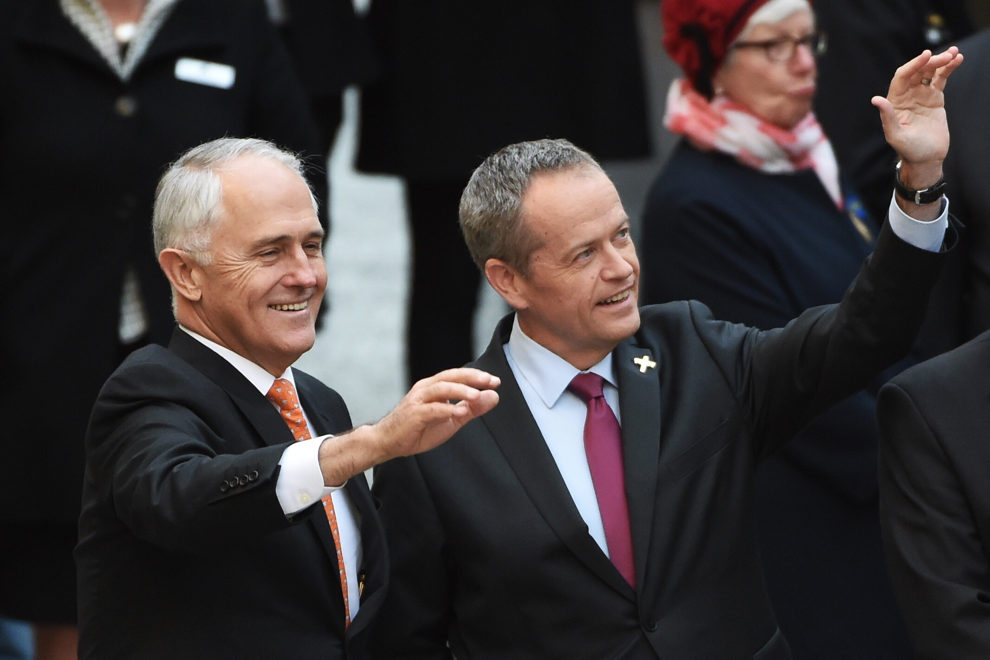 At first sight, it was just what Australia needs. The prime minister appealed to the opposition leader to “meet us in the sensible centre” for a joint initiative to make savings and balance the budget. But he then revealed to journalists that the “sensible centre” simply meant his own policies.

A week earlier, the PM had told a business lunch in Melbourne that he was “ready to reach across the aisle” to “work constructively with Labor and the crossbenches.” He went on: “A genuine commitment by Mr Shorten to bipartisan support for a responsible approach to the budget can help deliver positive results for the broader Australian community. We will take him up on that.”

But in case anyone was fooled into thinking that he was actually proposing something new, the PM slammed Labor five times in the next minute, making it clear that all the talk of seeking bipartisan support was a sham. It’s business as usual, and right now, from both sides, the business of politics seems to include demonstrations of faux bipartisanship.

Malcolm Turnbull’s idea of bipartisanship is that Labor will adopt Coalition policies; Bill Shorten’s idea is that the Coalition will adopt Labor policies. Nothing new is happening.

But as two opinion polls this week have shown, business as usual is not working in Malcolm Turnbull’s favour. Australians are not happy with their leaders. The PM’s once massive lead over Bill Shorten is now almost gone, and it’s clear that the 50.36 per cent of the two-party vote the Coalition won on election day was a reprieve rather than a ringing endorsement – just like the 50.12 per cent Labor won in 2010.

Shorten, of course, has given him no encouragement. He’s not into bipartisanship either, he’s into toppling Turnbull as soon as possible and forcing a divided Coalition back to the polls. Tony Abbott as opposition leader declared war on virtually everything Labor did, making good government impossible. It’s appalling for the spectators, but revenge is sweet, and the Coalition can expect Labor to give it the same treatment.

The reality is that Turnbull is trapped. If he continues to drift within the Coalition mainstream, as he has since taking office, his electoral support will keep eroding and his grip on power will slip away. Yet if he seizes the initiative to chart his own course, as Australians expected when he took office, the party reaction would be savage, and would destroy, if not his leadership, then the unity required to win a third term.

That is the hard political equation that explains why, whatever they say, real bipartisanship is off the political agenda – to fix the deficit, or to do anything else. The government will be blamed if things go bad, so it needs bipartisanship more than Labor does. But Turnbull does not feel free to offer it – and if he did, Shorten would probably reject it.

But let’s wish upon a star. Suppose both leaders were genuine in saying they want to take a bipartisan approach to fixing the budget deficit, and suppose their party rooms supported them. What would it look like?

Malcolm Turnbull, always good with words, did a fine job of defining it in his Melbourne speech to the Committee for Economic Development of Australia:

The big economic challenges and opportunities we faced in May are still there. And central to them all is this – how do we ensure Australia remains a high wage, first-world economy with a generous social welfare safety net? How do we ensure that we advance a fair Australia, a just society, where all share in our prosperity, at the same time as we drive strong economic growth?… With success and prosperity comes responsibility, to ensure the most vulnerable among us, the least advantaged in our society, are not left behind.

But how can those Christian words be reconciled with what the government is actually proposing in its budget cuts? As Peter Martin demonstrated starkly in the Age, the Turnbull government is asking parliament to cut the incomes of the poorest of the poor – unemployed people already way below the poverty line – to even lower levels.

The Turnbull government remains committed to almost all the measures that the Abbott government proposed in the 2014 budget but could not get the Senate to pass. That includes making young unemployed people live on nothing for six months before getting the dole, and slashing $20 billion from university funding in the decade from 2018. The first is heartless, and the second – when you consider how crucial the universities are to developing Australia’s future workforce and generating export income – is senseless.

You might conclude that the government is cynical in everything it has to say about the budget – advocating bipartisanship in words while rejecting it in deeds, claiming to support a “generous social welfare safety net” while its actions seek to kick the victims by leaving them with little or no support.

If it were serious about bipartisanship, however, the principle of getting the budget back in balance would be a very good centre to work from. It would give both parties room to evacuate their established policy positions and tackle issues that we need to tackle.

• There is a strong consensus among the experts that the Direct Action policy cannot deliver on the government’s pledge to cut emissions by 26–28 per cent of the 2005 level by 2030 unless it is given teeth. That can be done by allowing its safeguard measure to morph into a de facto emissions trading scheme, at least for the electricity sector, creating financial incentives for firms to reduce emissions sharply or pay others to do so – or to face penalties, which become budget revenue.

Bipartisanship is crucial to getting an effective policy that guides investors to reducing emissions at the lowest possible cost. As the Grattan Institute puts it:

Without an approach that provides certainty well into the future, businesses will not make the long-term efficient investments in low-emission technologies that can reduce emissions at lower cost. If Australia delays, then the task will be harder in the future… In the absence of the political consensus needed to implement best policy, we should work with what we have.

At some point, if he is to survive as the nation’s leader, Turnbull must cajole, bully and/or outflank his conservative opponents in the party by bringing the Nationals onside to endorse an effective climate change policy. If we fail, no one will suffer more than the Nationals’ core constituency: farmers, for whom a hotter earth will mean financial ruin as more moisture evaporates and crops and grasses wither on the stalk. Fixing the budget may provide a new way into this politically difficult problem.

• There is no issue on which Australians are more divided than our treatment of the asylum seekers found to be genuine refugees but left stranded for years in the prison camps on Manus Island and Nauru. Like the government’s plans to cut unemployment benefits, this policy is un-Christian, yet it too has worked for the government politically. It is still working, with the Essential Poll reporting that only 21 per cent think we are treating asylum seekers too harshly, while 29 per cent think we are too soft, and 31 per cent think we have the balance right.

The government may decide not to change a winning policy. But I suspect that support could erode sharply as opponents succeed in persuading more Australians to distinguish the policy of turning back the boats – a battle the government has clearly won – from the separate issue of how we should treat refugees who are already here. There would be significant budget savings if we gave them a chance for a decent life – if not in Australia, then in New Zealand, Canada, Malaysia or some other acceptable place of resettlement. It’s an issue on which Turnbull could redefine himself.

• Labor, too, should be ready to abandon policy positions. One of its most egregious is the opportunistic policy of blocking plans to lift the pension age to seventy by 2035. Wayne Swan deserves plaudits for being the first treasurer brave enough to propose lifting it to sixty-seven, but that became law only because Joe Hockey got the Coalition to support it. Labor should do the same this time, because there is no escaping the need for this one.

The polls show the increase is very unpopular, but we all must face facts. Our lifespans are extending at an extraordinary pace. The life expectancy of a male at the age of sixty has grown by nine years in half a century. Pensions are not free. They must be paid for by taxpayers, and it is not fair to ask future taxpayers – who themselves will be bringing up families, paying rent or mortgages, battling to make ends meet – to pay for a vastly increased number of old people in future, without older Australians themselves sharing the burden in some way.

Increasing the working age to seventy would mean that, down the track, half of the increase in our life expectancy would be spent in work, and half in retirement. It’s a fair, sensible reform, and Labor and the Greens should endorse it.

Among many other issues on which both sides ought to be ready to give ground is the health system, where Labor has fanned expectations that no government could meet. The Grattan Institute set out a solidly argued case for a range of policies on which the “sensible centre” could agree, in its pre-election “Orange Book,” and its chief, John Daley, penned a valuable set of suggestions with Brendan Coates in the Conversation.

If there is reason for encouragement, it is that treasurer Scott Morrison has done exactly what Daley and Coates suggested by going out to make the case for budget reform. In his speech to the Bloomberg forum last week in Sydney, he came clean about the size of the problem, pointed out the cost for future generations, focused on what was politically possible and, perhaps most importantly, admitted that the problem was not just one of spending being too high, but also of revenues being too low.

That was a big step towards a future consensus. Elsewhere in Inside Story, Peter Whiteford has shafted the myth that Australia is in the grip of an unsustainable explosion of welfare benefits. A recent front-page lead in the Australian claiming that Australia is suffering “rampant growth in public-sector jobs and wages” was equally untrue. This furphy rested entirely on unreliable, mercurial hours-worked data while ignoring the actual Australian Bureau of Statistics figures on government employment, which showed that over four years numbers have risen from 1.895 million to 1.899 million. Its “rampant growth” is in fact 0.05 per cent a year!

Budget repair will be a long, hard task. I can’t see any reason for hope in what Turnbull and Shorten are saying, but Morrison’s speech did actually move the debate towards the sensible centre. Yet the politics of the issue suggests that could be as close as we’ll get. •

National Affairs Out of the office Andrew Leigh 20 October 2020 Covid-19 could change how we work, for the better and — if we’re not careful — the worse
Close

The United Nations has a rare opportunity to help secure a sustainable peace, writes Alan Keenan 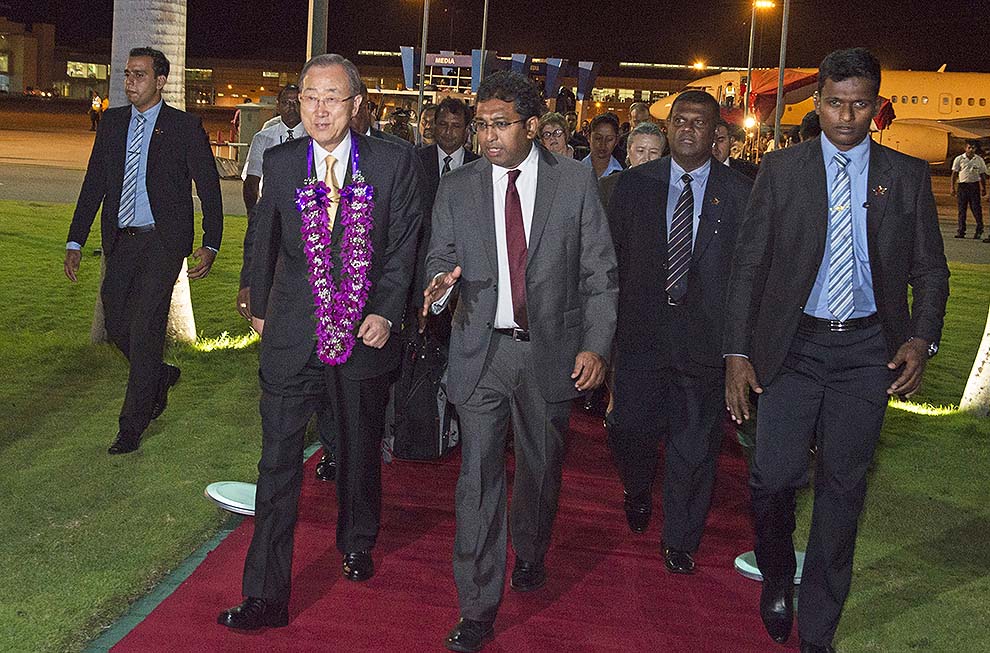