The likely makeup of the next Indonesian government gives cause for optimism, writes Dominic Berger 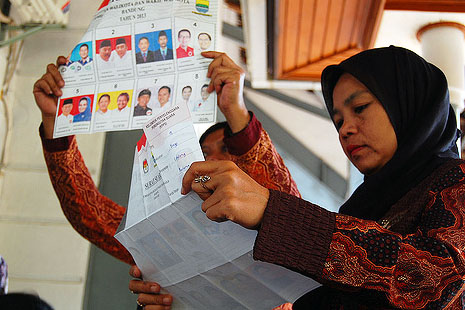 LAST WEEK Indonesians voted in their fourth free and fair national election since the fall of President Suharto in 1998 ended four decades of authoritarianism. A win for the main opposition party – the Indonesian Democratic Party of Struggle, or PDI-P – was widely predicted, largely because of the enthusiasm surrounding its popular presidential candidate, Jakarta’s governor Joko Widodo, widely known as Jokowi.

In a highly fragmented party system where twelve parties competed for 560 seats in the House of Representatives, some polls suggested the PDI-P could take close to 30 per cent of the popular vote. Quick counts on Wednesday suggested that the party fell far short of such predictions, earning the trust of only around 19 per cent of Indonesian voters.

The dominant reaction to the election so far has been one of surprise and disappointment that the PDI-P did not earn a stronger mandate for what many hoped could be a reformist Jokowi-led government. At the same time, concerns were aired that despite predictions of declining influence, Islamic parties appear to have increased their combined vote from 29 per cent in 2009 to around 32 per cent.

But there is reason to be cautiously optimistic. It is likely that the coalition taking shape over the coming weeks will produce a moderate government that could reverse the recent trend of hostility towards religious minorities.

Now that the votes are counted, and parties know exactly what they have to bargain with, party elites are busy cementing coalitions. To nominate a president/vice-president pair for the presidential election on 9 July, a party, or a coalition of parties, must reach 25 per cent of the popular vote or 20 per cent of lower house seats. Polls had suggested that the PDI-P would get close to reaching this threshold on its own, but it now seems that it could fall just short.

But while the coalitions for presidential elections are important, within weeks parties will also form a governing coalition that can command a majority of seats in the House of Representatives. It is almost certain now that the PDI-P will hold the highest number of seats in the house. In addition, despite the PDI-P’s failure to capitalise on Jokowi’s popularity in the legislative election, it remains highly unlikely that he will be defeated by former general Prabowo Subianto in the presidential elections in July. While the low result for the PDI-P makes it more reliant on coalition partners, eventually the parties will have to either cooperate with a Jokowi-led government or assume a more oppositional stance.

There are several reasons why the next PDI-P–led coalition is likely to be more moderate on the question of minority rights than the current government of Susilo Bambang Yudhoyono and his Democrat Party.

The PDI-P regards itself as a legatee of Sukarno, Indonesia’s first president, and is a staunch defender of his Pancasila philosophy – a set of ideas that enjoins belief in God but also entails the virtues of diversity and tolerance. In the Indonesian context these leanings are often described as “secular-nationalist,” in contrast to parties that champion a more explicitly Islamic agenda. In opposition the PDI-P opposed several conservative pieces of legislation and criticised the government’s inaction in the face of violent attacks against Shia Muslims, the Ahmadiyah and other religious minorities. It is likely to continue drawing on this pluralist ideological legacy when in government.

In addition to its own pluralist track record, according to Indonesian media reports the PDI-P is strongly inclined to work with the National Awakening Party and the National Mandate Party, who surpassed pollsters’ expectations by gaining about 9.2 per cent and 7.5 per cent of the national vote respectively. Both are linked to Indonesia’s two oldest and largest Islamic organisations, Nahdlatul Ulama and Muhammadiyah, whose membership bases, in the tens of millions, make up the vast majority of Indonesia’s Muslim community. A coalition with these two parties would anchor the “secular-nationalist” PDI-P firmly in the pluralist Muslim centre.

While the probable coalition between these three parties is in itself a centrist force, the likely exclusion of two other Islamic parties further indicates that the next government will be more moderate.

The Prosperous Justice Party and the United Development Party have both been part of President Yudhoyono’s governing coalition, holding key ministries. To varying degrees, both played a role in Indonesia’s losing its reputation as home to a moderate and tolerant Islam. Importantly, in contrast to the gains made by the moderate Islamic parties, the combined vote for these two parties in 2014 stagnated relative to 2009. The PDI-P is unlikely to take either of them on board in a new government.

But a coalition of the PDI-P with only the two moderate Islamic parties would not be enough to form a stable majority government. The PDI-P will need the support of one of the medium-sized parties – Gerindra, Prabowo’s party; Golkar, Suharto’s former electoral vehicle; or the Democrat Party, incumbent president Yudhoyono’s party.

It seems unlikely that PDI-P and Gerindra can work together for a number of reasons. First, Prabowo recently accused PDI-P’s chair, Megawati Sukarnoputri, of betraying an agreement dating from 2009 between the PDI-P and Gerindra, according to which Megawati was to support Prabowo for the presidency in 2014 after he ran as her vice-president in 2009. Second, Jokowi is likely to shatter Prabowo’s ambition of becoming president in July, after Gerindra helped to deliver Jokowi onto the national scene by supporting his successful run for governor of Jakarta in 2012. Last, and most importantly, with the presidential race pitting Jokowi against Prabowo, PDI-P and Gerindra are likely to throw more dirt at each other over the coming three months.

That leaves Golkar as the only party that can offer enough supportive House of Representatives seats to the PDI-P when it comes to passing legislation. And what better party to govern with than the party that is yet to spend a single day in opposition in over four decades of its existence. Despite expressing coy ambiguity over Golkar’s prospects of joining a PDI-P-led coalition on election night, Golkar chair and presidential candidate Aburizal Bakrie has previously indicated that Golkar is a “government party.”

While Golkar has a mixed record in standing up for minority rights, the absence of the Prosperous Justice Party and the United Development Party from government is bound to drag the government down a much more tolerant path. The starkest illustration of the next government’s likely approach to minorities is the removal of the conservative religious affairs minister, United Development Party chair Suryadharma Ali, who is facing a backlash from his own party board for, unbeknownst to them, appearing on stage with Prabowo at a Gerindra rally last week. He will soon be replaced with a more moderate figure, almost certainly from the National Awakening Party.

In sum, under this possible scenario of a new governing coalition, the conservative slice of Islamic parties is relegated to opposition benches. Instead, the most consistent defender of pluralist values, the PDI-P, together with the moderate Islamic parties, takes the levers of government.

While a coalition that includes Golkar is not what many hoped for, the realities of election day leave little hope for a more limited reformist coalition. But a PDI-P–led government, in which its two partners represent the moderate Islamic voice and Golkar makes sure the machine putters along, would at least allow for the increasingly tight space for religious minorities to widen again. •

Dominic Berger is a PhD candidate in the Department of Political and Social Change at the Australian National University’s College of Asia and the Pacific. This article was first published by the Canberra Times and forms part of New Mandala’s coverage of the Indonesian elections.