Has social media created an artificial atmosphere around this year’s election? 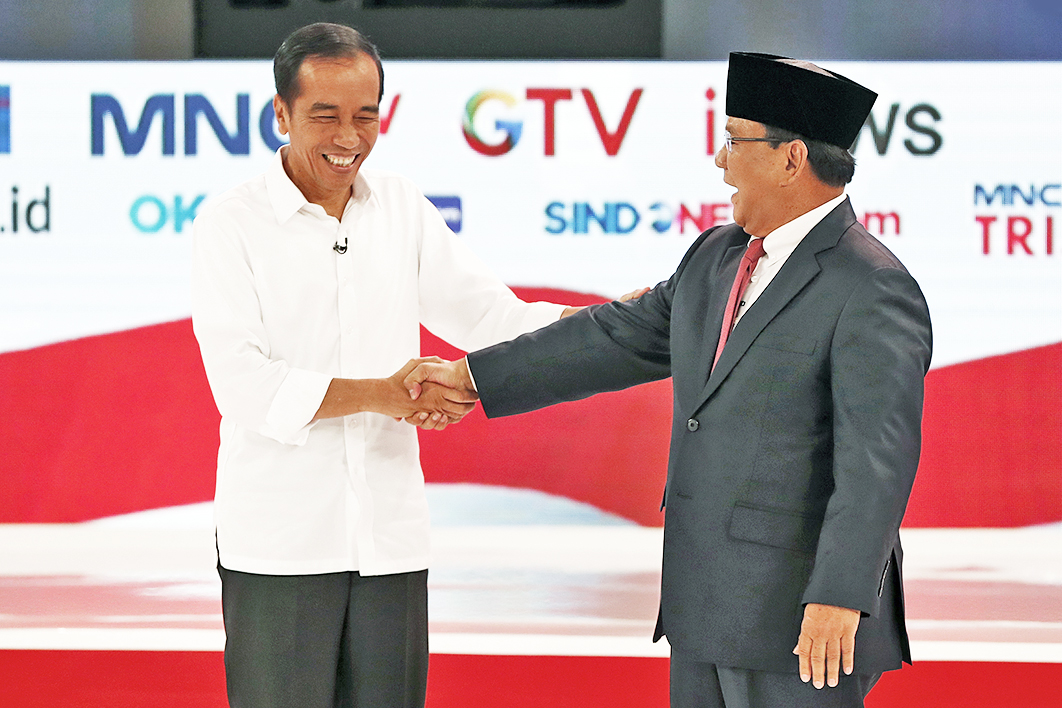 Indonesia’s 2019 presidential election is a paradox. On the one hand, there’s little to distinguish the policy platforms of the two candidates. Seemingly reluctant to criticise president Joko Widodo, opposition contender Prabowo Subianto has run a timid, low-key campaign. Presidential and vice-presidential candidates haven’t engaged in a clear contest over the direction of the country, and Indonesians have generally found the televised debates boring. The most provoking campaign material so far has been a fake account featuring two imaginary candidates, Nurhadi and Aldo, encouraging citizens to golput, or abstain from voting, apparently because the current options are so unpalatably similar.

On the other hand, many Indonesians describe the political climate as deeply polarised. Subianto’s running-mate Sandiaga Uno recently declared that “we need to unite the country” and expressed a hope that a “great disconnect” will be “amended” after the election. The General Elections Commission, or KPU, said it would form a “peace committee” for the third televised debate. And when one university invited me to give a guest lecture I was asked not to talk about the election because it was a “sensitive topic.” A lecturer there told me that the current discourse of politics, in which students “cannot agree to disagree,” is “bad for Indonesia and cannot be controlled,” and a student asked my advice about how political “peace” could be achieved.

What drives this disconnect between a largely tame election campaign and the way many people feel about it? One way to answer this is to think about how online lives are distorting offline realities. Rather than Indonesia experiencing a “polarising” election campaign, perhaps social media discourse is making Indonesians perceive that polarisation is greater than it really is — and perhaps politicians are encouraging that perception.

Of course, the previous two high-profile elections — the last presidential election and Jakarta’s mayoral election — could be defined as highly polarising, and in both cases the division was driven by social media. In 2014 Jokowi (as Widodo is usually known) and Prabowo led a highly charged presidential campaign in which the two were often portrayed as starkly different in campaign material and in the media. Jokowi followers changed their Facebook page to “I stand on the right side,” the “right side” being a corruption-free meritocratic leadership. They contrasted Jokowi, who had worked his way from local mayor to governor of Jakarta to presidential candidate, with Prabowo, a former military general and New Order figure who spoke of family ties as key to his leadership credentials. The campaign caused serious friction in many families.

One example of how the 2014 election was defined was a Jakarta Post editorial that endorsed Jokowi because “there is no such thing as being neutral when the stakes are so high… Rarely in an election has the choice been so definitive.” The Post argued that Jokowi was “determined to reject the collusion of power and business” while Prabowo was “embedded in a New Order-style of transactional politics that betrays the spirit of reformasi.” Many human rights activists saw Jokowi’s defeat of Prabowo as a victory for democracy over authoritarianism. Jokowi may have disappointed these activists (and many others) in his first term, but the polarising campaign messages were clear in the lead-up to his win.

Then came the undoubtedly polarising Jakarta election of 2017. Official and unofficial campaign material promoted Islam as its focal point, and the term pribumi, which distinguishes Indonesians whose ancestral roots lie mainly in the archipelago from more recent arrivals, was rejuvenated. Digital media had become an increasingly important space for Indonesians to debate and discuss these issues, both in private WhatsApp conversations and more publicly on Facebook and Twitter. As the media scholar Merlyna Lim described it, the social media election discourse in 2017 was characterised by the “freedom to hate.” Add to that the rise of hoax news, “black” campaigning, and paid trolls, or “buzzers,” and Indonesian politicians, parties and supporters helped create a highly aggressive discourse. Middle-class Indonesians recall incredulously how if someone disagreed with someone else in family or work WhatsApp groups they left the group! Others explained about how it was unwise to talk openly about whom you would vote for because it would lead to segregation in religious communities.

Not surprisingly, having survived two polarising elections, many Indonesians were both wary and weary of elections. As Prabowo once said, “democracy makes us tired.” So, is Indonesian democracy having a power nap before the campaign begins in earnest, or is it sleepwalking into something completely different?

Both Prabowo and Jokowi have clearly had buzzer teams working to shape online discourse, as well as to counter, and even create, “black campaign” material. The language of war is often used to describe the digital sphere, with a “weaponisation” of “online armies” and “cyber warriors” seen to be taking place. Perhaps it is no surprise, then, that some Indonesians describe the situation as a “hoax emergency.” As Jokowi observed about this Russian-style propaganda, “They don’t care whether it would cause divisiveness in society, whether it would disturb peace, whether it would worry the public.” It was, he added, a systematic drive to “produce non-stop slander, lies and hoaxes that confuse the people.”

Citing some extraordinary cases, local experts have warned that social media can easily cause conflict because of Indonesia’s low literacy levels. In the words of academic Adi Prayitno, “many Indonesians are still irrational and tend to be emotional when it comes to different opinions in politics,” leading them to think politics is a “one-way-to-heaven issue or a fight between good and evil.” The social media discourse in Indonesia colloquially describes Jokowi’s online supporters as cebong (tadpoles) and Prabowo’s online followers as kampret (bats).

At the heart of the idea of social media polarisation is the example of the United States. Former presidential candidate Agus Yudhoyono, for example, argued in a recent speech that Indonesia’s political divisions were caused by rampant misinformation and hoaxes on social media. “If this situation continues,” he said, “it will put an end to the country’s multiparty system and will lead the country to a two-party system like in the United States.” A dual-party system was not suitable for Indonesia’s history and diverse society, he added.

National Police deputy chief Ari Dono Sukmanto agrees, saying recently that perhaps the disruption that occurred in the United States “could happen to us, too.” One political campaigner on the Jokowi side told me the US election was crucial to their response to “black campaign” material: “Michelle Obama said, ‘When they go low, we go high.’ But it didn’t work. Trump won. So here, when they go low, we go lower.”

Despite all the concerns about division, disinformation and hoax news, though, the polls haven’t changed. Jokowi still leads on around 57 per cent to Prabowo’s 32 per cent. Rather than creating a “hoax emergency,” the two online armies seem largely to be fighting each other, while younger Indonesians increasingly move away from the tense political discourse on Twitter and Facebook towards the more apolitical Instagram. “The Nurhadi-Aldo golput phenomenon isn’t because people want a better candidate,” my Indonesian colleague tells me. “It’s because people don’t want a contest. They’d rather joke about politics on social media than get into serious debates about it.”

This slide from Ismail Fahmi’s social media analytics company, Drone Emprit, shows the “polarisation” of supporters that occurred on Twitter during the second televised debate. The “01” cluster represents Jokowi’s supporters and the “02” Prabowo’s. I would interpret this data as showing that the polarised online discourse is created largely by partisan buzzer teams. But rather than acknowledging this, Indonesian politicians are more likely to argue that these partisan discussions online are the result of the election itself and the way Indonesians are engaging with politics.

The atmosphere of disinformation and division is having an effect, however, on how Indonesian elites and ordinary citizens feel about democracy. Direct and open contestation, a key feature of any democracy, is clearly a problem for many Indonesian politicians and even some members of the public.

Yet despite the re-match of presidential candidates from five years ago, there is no clear ideological contestation in the 2019 election. The 2014 contestation of Jokowi as democrat versus Prabowo as New Order figure no longer fits. Jokowi is no longer the face of a reformist democrat, as Tom Power has argued in New Mandala. Furthermore, Jokowi has built consensus and is increasingly strict about opposing voices. He has managed to get the majority of political parties on his side, has the support of most mainstream media companies (including those who were critical of him in 2014), and has pursued a more aggressive crackdown on opposition figures through the Electronic Transactions Law.

Is religion still a polarising factor, as it was in the 2017 Jakarta election? Vedi Hadiz sensibly argued in the aftermath of Jakarta’s 2017 election that Indonesia was seeing the emergence of two contestations among conservative forces: the conservative Islam adopted by Prabowo and his Islamist party allies, and the nationalist conservatism pushed by Jokowi and the military.

But I’m not sure it’s possible to distinguish Prabowo and Jokowi even on these conservatisms anymore. As Jokowi has shown by appointing the Islamic scholar Ma’ruf Amin as his running mate (and in many other facets of his politics), incorporating opposition forces is preferred to making a stand against them. Ridwan Kamil, who made a similar choice for vice-governor in the West Java election, described this process to me in this way: “In Indonesia, perception about politics is always divided in Islamic image and nationalist image. So if the combination comes from both, people consider it as a balance. People consider me more as nationalist, which means I have to find a vice-candidate that has an image which is more from Islam.”

Those from Prabowo’s Gerindra party, meanwhile, privately tell me that everyone would be invited to join their coalition should they win. Their most popular social media hashtag so far — simply #gantipresiden (“change the president”) — encapsulates the ideological drought of the opposing camp.

So social media is creating an artificial atmosphere of polarisation, which in turn gives politicians the excuse to avoid having a serious policy or ideological contest in the name of avoiding fuelling that supposed polarisation. Perhaps scarred by the elections of 2014 and 2017, many politicians and Indonesian citizens are quite happy to see a stable — even boring — election at which the incumbent president is re-elected easily. But if the political contest is confined to social media, things aren’t so great either.

Of course, there is still a month to go. But so far this campaign is missing something essential to a democracy — presidential candidates pitching clear ideological and policy differences. The emergence of social media disinformation and hoax news seems to have meant that many Indonesian politicians and citizens see a highly contested election campaign, ironically, as the biggest threat to Indonesian democracy. •

An earlier version of this article appeared in New Mandala.

Ross Tapsell is a senior lecturer and researcher at the ANU’s College of Asia and the Pacific, specialising in media and culture in Island Southeast Asia.

India’s experiment in majority government is almost over

Merchant of dreams? Congress party president Rahul Gandhi at a rally in Mumbai on 1 March, during which he promised 500 square foot houses to slum-dwellers in Mumbai. Pratik Chorge/Hindustan Times 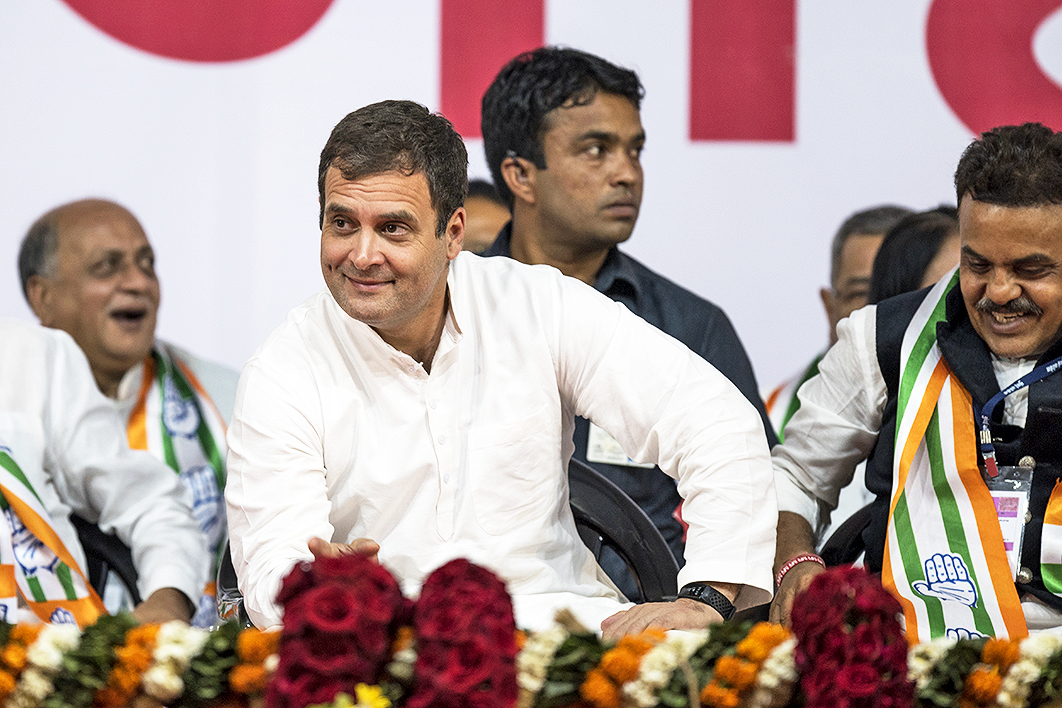 Merchant of dreams? Congress party president Rahul Gandhi at a rally in Mumbai on 1 March, during which he promised 500 square foot houses to slum-dwellers in Mumbai. Pratik Chorge/Hindustan Times