Israel and the Palestinians: public opinion and public policy

The evidence on Australian attitudes is much less clear than protagonists argue, writes Murray Goot, and the implications for public policy are far from straightforward 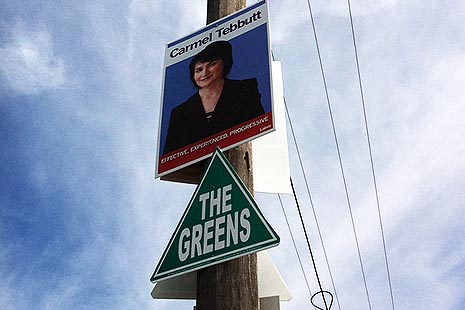 The evidence suggests that a change of government policy on the Middle East wouldn’t have any easily predicted electoral impact. Neal Jennings/Flickr

THAT Australians are less well disposed to Israel than they once were is almost certainly true. Israel’s friends are no less likely to deny the truth of this than are Israel’s enemies. Identifying the turning points in public opinion is much more difficult. So, too, given the dearth of decent data, is the task of estimating the breadth or depth of the change. Even if that could be done, there remains the question of how governments should respond.

Recently, Peter Manning, the respected journalist and author of Us and Them: A Journalist’s Investigation of Media, Muslims and the Middle East, argued that the “overwhelming trend” in data compiled from various opinion polls “shows a sharp swing since the 1980s against Israel's image and actions among ordinary Australians.” This account of the polls is misleading. Manning went on to argue that since public opinion had shifted, government policy should also change. But is a swing in public opinion sufficient reason for public policy to swing too?

But it is hardly evidence of a “trend.” We need more than two data points to show when opinion shifted. Over a quarter of century there may have been a number of movements, the earliest perhaps quite soon after the 1981 poll. And that poll may not have been the point at which opinion was most polarised.

The differences in the figures produced, in 2006, by the McNair Ingenuity and UMR polls are puzzling. Perhaps the answer lies in the different ways the two sides are described. The “Jewish people” (McNair Ingenuity) may not have been as well regarded as “the Israelis” (UMR), the “Arabs” (McNair Ingenuity) not as well thought of as the “Palestinians” (UMR). Ethnicities might be less appealing than nationalities. In 1981, had the question been about “the Israelis” and “the Palestinians” rather than about the “Jewish people” and the “Arabs,” McNair might have produced a closer result.

Feelings of “sympathy” are very general and rather vague. Especially where they are not strongly held, sympathies may not be a very reliable guide to how respondents judge specific circumstances. When the question of “Israel’s recent military action in the Gaza strip” was raised in the 2009 Morgan poll, fewer (28 per cent) said it was “justified” than said it was “not justified” (42 per cent). But in other polls, conducted in 2006, more respondents sympathised with Israel (33 per cent in July, 27 per cent in August) than with Hezbollah (15 per cent and 12 per cent respectively) in the fighting then taking place; the majority response was “neither,” “both” or “can’t say.”

Polls that touch on Israel and the Palestinians – and few have – often fail to produce majorities in favour of one or the other. In 1946, a Morgan poll found opinion evenly divided (44:44) not over “whether Palestine should be partitioned,” as Manning claims, but on “limiting the number of Jews who enter Palestine.” In 1967, another Morgan poll didn’t find a “large majority” supporting Israel, as Manning reports, but a plurality (44 per cent) in favour of Israel keeping “the old city of Jerusalem” rather than giving it to the United Nations to be “internationalised” (36 per cent) or giving it “back to the Arabs” (6 per cent). And in 1974, after the 1973 war, the polls didn’t report “a large majority” that was “pro-Israel,” as Manning believes; they reported pluralities whose sympathies were with “the Israelis” rather than with “the Arabs” – 44:5 in a Morgan poll, 37:5 in a Saulwick poll.

WHAT should we make of polls where opinion is not so much evenly divided as widely spread – as it has been on the general question of “sympathy” in recent times – between pro/anti, neither/both, and unsure? Of the recent items to which Manning refers the proportion typically recorded as “can’t say,” “don’t know” or “unsure” is around 20 per cent or more. Figures this high suggest relatively low levels of knowledge about the issues or engagement with them. In an online poll conducted by Research Now in May 2010, only a quarter of the respondents rated their “own understanding of the Israel–Palestine conflict” as “very good” or “good.”

Even if the results are meaningful, where public opinion treads governments may not feel compelled to follow. Manning’s depiction of a plurality or minority as “a large majority” in 1967 and 1974, and his reference to an “overwhelming trend” since the 1980s, as if earlier majorities had now become minorities, is important. His point, after all, is that rather than “snubbing” public opinion the government should change its policy. And the democratic argument for policy change in response to public opinion is much stronger when the opinion is that of the majority rather than that of a minority.

Manning frames the consequences for government of not following any shift in public opinion in terms of votes. In particular, he warns of a loss of votes to the Greens – a relatively new threat to the government, since previously “progressive voters had nowhere else to go.”

Although the balance of opinion is now less lopsided, a loss of votes doesn’t necessarily follow. None of the polls show – in fact, top-line results cannot show – whether the issue is a vote-changer. In any event, governments that judge an issue to be a vote-changer need to consider, if they are prudent, whether changing their policies might lose votes not just gain them. A shift by the government away from its present stance might please supporters of the Palestinians’ claims but anger those committed to Israel’s.

On an issue like this, where the votes of very particular minorities may be at stake, governments are less likely to consider national poll data than the distribution of sympathisers in particular seats. In marginal seats, which are going to be won either by the government or by the Coalition, “progressive” voters who shift to the Greens and want to cast a valid vote will have nowhere else to go but back to Labor; a second preference for the Coalition won’t make much sense to these voters if the opposition hasn’t shifted on this issue either. Only in the two or three seats where the winner is likely to be either the government or the Greens does the issue stand even the remotest chance of deciding the result.

If Labor were to follow Manning’s advice the government might strengthen its hold on a marginal seat like Reid, in Sydney’s western suburbs, with the fourth highest proportion of Islamic residents. But it would weaken its hold on Melbourne Ports, which has the highest proportion of Jewish voters, and where the Liberals might pre-select a Jewish candidate strongly committed to Israel, as they have done in the past.

Changing its stance could help the government retain the marginal seat of Grayndler in Sydney’s inner-West, where the threat is more likely to come from the Greens than from the Liberals. But given what happened to the Greens’ candidate for Marrickville, which takes in part of Grayndler, at the 2011 New South State election we shouldn’t count on it; the candidate embraced the BDS (Boycott, Divest and Sanctions) movement, registered a precipitous drop in the level of her support (according to a Galaxy poll) after doing so, and failed to take a seat from Labor that the Greens should have won.

Whether or not governments judge their position to be a net electoral liability, they need to weigh up things other than votes. These, in relation to the Middle East, would have to include Australia’s alliance with the United States, on the one side, and perhaps its quest for a seat on the Security Council, on the other. The merits of the issue might also warrant attention.

If a government feels the public is hostile to its position, and sees the issue as a vote-changer, it can either fall into line, ignore the polls (especially if the opposition isn’t biting) or adopt some other strategy – arguing against it, trying to reframe it or simply displacing it on the list of public concerns by talking up some other issue.

On the question of Israeli settlements, the government might well want to criticise Israel if not publicly then in private. If it did it would be in line with the Research Now poll, noted by Manning, which reports that most respondents (77 per cent) agreed that “Israel should withdraw from the settlements it has constructed on Palestinian land.” But on the question of whether Palestine should be admitted to the United Nations as a full member, the government might disagree – notwithstanding the Morgan poll of September 2011 in which the majority (62 per cent) agreed that the United Nations, in the teeth of opposition from “Israel and the USA,” should “recognise Palestine as one of its member states.”

Faced by a series of polls that appeared to show the Palestinians – not the Israelis – losing the PR battle, it is unlikely that commentators sympathetic to the Palestinian position would warn the government to heed such polls or face an electoral backlash. •