Keeping the country in the Coalition

Over almost a century, relations between the two major non-Labor parties haven’t always been smooth 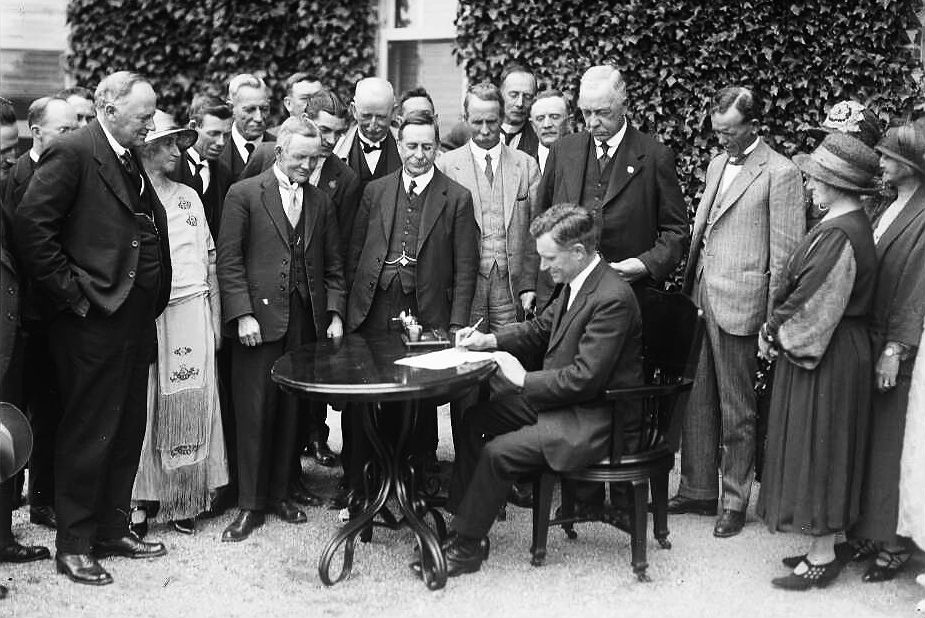 Barnaby Joyce’s travails have focused attention on the tensions inherent in the coalition between the Liberals and the National Party. Regardless of how this latest conflict plays out, it is just another chapter in a century-long relationship that has usually managed to hide its internal stresses and strains behind an outward appearance of harmony. Despite the occasional potentially damaging tiff, it’s been a remarkably durable partnership.

The Nationals, known then as the Country Party, first entered parliament in 1919. The new party was largely an amalgam of candidates sponsored by farmer and settler organisations, notably the Farmers and Settlers Association in New South Wales and the Queensland Farmers’ Union.

Their thinking was that the major parties — the Nationalists and especially Labor — were increasingly dominated by city interests. People were steadily drifting away from the bush, and that was helping to erode Labor’s former strongholds among agricultural and pastoral workers and in the powerful Australian Workers’ Union. The defeat of Andrew Fisher’s Labor government in 1913 — partly a result of a sharp drop in its non-urban vote — marked another step in Labor’s transformation into a predominantly urban party.

The Country Party was not slow in making its presence felt. It won fourteen seats in a House of Representatives of seventy-five at the 1922 election, giving it the balance of power. The leader of the party, the country surgeon Earle Page, was determined to use those numbers decisively, in his way and on his own terms; in return for cooperation with the Nationalists, his principal demand was that prime minister Billy Hughes, who had defected from the Labor Party in 1916, must go.

Hughes fought back for a while, attacking Page’s leadership as obstructive and opportunistic, and even going so far as to claim that the Country Party was already “wasting away” — the first of many such predictions to be made in the years to come. (Hughes never forgave the Country Party for forcing him from office. Years later, he was reminded that he had been a member of every party in the parliament at some stage, six in all, except the Country Party, to which he replied, “Well, a man has to have some principles.”)

Hughes eventually resigned in favour of Stanley Melbourne Bruce in February 1923, and the new PM readily agreed to Page’s demands for key portfolios. But Page went further, insisting that the government be known as the Bruce–Page government — the first and only time a Commonwealth administration has been jointly named. Bruce’s hasty arrangement with Page didn’t please everyone, and pockets of resistance continued to smoulder in both Nationalist and Country Party camps.

Victoria was the scene of the next outbreak. By 1935, relations between the United Australia Party, or UAP (successor to the Nationalists and forerunner of the Liberal Party), and the Country Party were badly strained after a period of coalition. The Country Party leader, Albert Dunstan, turned against the senior coalition partner, doing a deal with Labor that allowed him to head a minority government. This unusual alliance continued until 1943 and resumed in 1950–52.

The sense of betrayal within Victoria’s conservative ranks was profound — and a certain distrust continues to this day among some Victorian Liberals with long memories. Dunstan’s actions fuelled the animosity of long-serving Liberal premier Henry Bolte (1955–72), who once called the Country Party “political prostitutes.”

After it was formed out of the wreckage of the UAP in 1945, the new Liberal Party initially sought a merger with the Country Party. The idea was rejected out of hand. The Victorian Liberals declared war, threatening to destroy their counterpart by taking it on in rural electorates, and even for a time provocatively changing their own name to the Liberal and Country Party.

Leader Earle Page had aroused resentment when, during his short-lived prime ministership after Joe Lyons’s death in 1939, he tried to block Robert Menzies’s elevation to the UAP leadership, accusing him of cowardice for having resigned his reserve commission during the first world war. He failed to stop the man who would later become Australia’s longest-serving prime minister.

Almost three decades later, another Country Party leader, John McEwen — who, like Page, had become prime minister on the death of an incumbent, Harold Holt — would be more successful in blocking a likely successor when he vetoed Billy McMahon, the deputy Liberal leader. The protectionist McEwen was blunt in his opposition to the free trader McMahon: if he were elected prime minister then the Country Party would leave the coalition. The veto worked and the Liberals chose John Gorton instead (although McMahon would topple Gorton in 1971, after McEwen withdrew his opposition).

Remarkably, some Liberals felt that McEwen should stay on as prime minister. “There is no doubt that he has the international standing and ability,” said the most prominent advocate, Sir Wilfrid Kent Hughes. “I don’t know whether he would accept the position, but he should be asked to do so by the Liberal Party.”

Another senior Liberal figure, Sir Robert Southey, told me later that while McEwen was highly regarded in the Liberal Party, his core support at the time amounted to “one, perhaps two, at the most.” But Southey, who was deeply involved in the issue, did say that the McEwen idea was seriously entertained — though only as a possible basis for merging the Liberal and Country parties in Victoria, long sought by the Liberals but consistently rejected by the Country Party. It came to nothing.

“I think it is true that many people regarded me as the best man for the job,” recorded McEwen in his memoirs, “and I was certainly the most experienced leader in the Australian parliament at that time. The great difficulty, though, was that I belonged to the smaller party in the coalition. To become the permanent prime minister I should have had to leave the Country Party and join the Liberals. That was unthinkable.”

The stresses continued after the election of the Whitlam Labor government in 1972. The coalition parties were forced into the unfamiliar territory of opposition, with each blaming the other for the loss. At one point, an unseemly dispute broke out between the Country Party leader, Doug Anthony, and the deputy Liberal leader, Phillip Lynch, over who was the “second most senior figure in the opposition.”

In Queensland, where the Country Party had been the senior coalition partner since 1957 (thanks to a rigged electoral system), tensions continued to simmer. In 1983, an election was triggered when a number of Liberals, including welfare services minister Terry White, crossed the floor of the parliament in order to support a Labor motion to create an Expenditure Review Committee. White was sacked from cabinet for supporting the motion; in response, he launched a successful party-room coup against Liberal leader and deputy premier Llew Edwards.

The Nationals came out of the election one seat short of a majority, but premier Joh Bjelke-Petersen managed to entice two Liberals into his ranks and continue in office. By now in open war with the Liberals, the Nats won a majority in their own right in 1986.

This emboldened Bjelke-Petersen to embark on his bizarre “Joh for PM” campaign the following year, setting himself at odds with the federal Liberals and the federal National Party. He took aim especially at opposition leader John Howard, who had annoyed him by cracking down on tax evasion when he was federal treasurer, and at Nationals’ leader Ian Sinclair, who had supported Howard. The result was chaos: Bjelke-Petersen’s campaign barely left the ground, the coalition parties failed to dislodge Labor, and both Howard and Sinclair were dumped as leaders by their own parties.

In 2007, partly to diffuse such tensions, the two conservative parties merged in Queensland to form the Liberal National Party, or LNP. But that deal has led only to renewed tension, intensified by repeated electoral failures and a single, disastrous term in government under Campbell Newman. Whether the marriage will endure is hard to say.

Back at the national level, the Coalition was riven by with tensions even before the Joyce scandal erupted. They came to a head late last year when Joyce dumped the party’s best-performing minister, Darren Chester, in an apparent payback for Chester’s having supported his fellow Victorian, Bridget McKenzie, over Joyce’s preferred candidate for the deputy leadership, Queenslander Matt Canavan.

With the national Coalition agreement automatically reviewed after each election, it is almost certain that the Liberals will attempt to restrict some of the Nationals’ autonomy, especially given the humiliation it has caused Liberal prime minister Malcolm Turnbull through his inability to deal firmly with Joyce. As the National Party approaches the centenary of its first parliamentary wins, tensions seem unlikely to recede in the party itself, or in the Coalition as a whole, any time soon. ●