Fresh back from overseas, a prime minister makes a stunning telecommunications announcement. And the historical parallels don’t end there, writes Jock Given 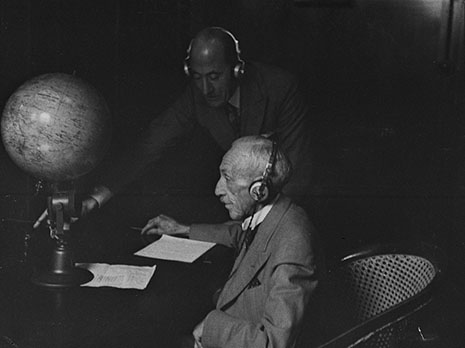 He urged the members of parliament “to take their courage in both hands, and to have a little faith in the future of this country. It was not in any timid, shirking spirit that our pioneers went out and made Australia what it is. They had faith though they had far less reason for its exercise than we have.”

The plan, then, was for the Commonwealth to take a bare majority stake in a company that would build and operate a direct wireless telegraph service between Australia and Britain. This service would compete with the undersea cables that had been the only form of electronic communication between Australia and the rest of the world since the opening of the Overland Telegraph Line in 1872 that linked to a cable from Java.

It was a huge risk. No commercial wireless service was operating over anything like the distance between Britain and south-eastern Australia, two places almost as far apart on the earth’s surface as two places can be. After commitments were made but before construction started, new short wave wireless technology was developed offering faster transmission speeds but lower capital and operating costs than the long wave technology initially proposed. The Marconi Company that developed it was an aggressive multinational that had sued the Commonwealth for patent infringement a few years earlier.

But the potential benefits seemed immense. Wireless promised lower prices for telegrams because of its lower costs. This was particularly attractive to the newspapers that depended on cables for their overseas news. A direct link with London that could not be severed by hostile powers promised deeper political engagement and resonated strongly in a Dominion distant from the heart of the British Empire.

A public private partnership was chosen rather than a wholly public or private entity for several reasons. The Commonwealth could afford a big capital injection that might otherwise have been hard to raise solely from private investors. The private Marconi Company and its Australian affiliate Amalgamated Wireless (Australasia), AWA, controlled the patents for the technology. Hughes had little time for the bureaucrats at the Post Office who were the most likely operator of a state-owned service, preferring the businessmen at Marconi and AWA. It didn’t hurt that they’d contributed £500 to the controversial £25,000 payment made to Hughes in November 1920 “in recognition of his services to Australia and the Empire during the war and at the Peace Conference.”

The partnership was consummated in 1922 when the Commonwealth took a bare majority stake in a recapitalised AWA. It held onto it until 1951, when the shares were sold by the Menzies government, although the international wireless services had been nationalised into the new Overseas Telecommunications Commission soon after the war.

WHILE THIS HISTORY does not offer neat lessons for Kevin Rudd’s proposed public private communications partnership, it does provide some clues about how such an arrangement might succeed, stretch and strain. Indeed, there are striking similarities between the political and industrial origins of the two schemes – a political, technical and fiscal opportunity, a prime minister with freshly endorsed power, a perception of complacency or crisis in Australia’s uptake of a new technology with big economic and social implications and dissatisfaction about the process used to award a large public subsidy to fix the problem.

Those clues lie in the technology, the market power of the institution created and its financial performance, the duration of the arrangement and the level of political support for it.

Technology is always a risk, even apparently “future-proof” technology like fibre-to-the-premises. Finance minister Lindsay Tanner and industry analyst Paul Budde both call it “the final destination,” but in telecommunications networks there is no such thing. Networks extending fibre closer or all the way to customers’ premises are already being deployed on a small scale in parts of Australia and on a large scale overseas, so they may not seem to require the kind of bold technical gamble taken on Marconi’s untried short-wave technology in the 1920s.

The voice telephone market shows how attractive mobility can be to consumers. Mobile phones hardly existed two decades ago. Now there are more services than people in Australia, and more than twice as many as fixed line telephone services.

Market power is another challenge. This new network is likely to be an immensely powerful force in fixed line communications, including the backhaul network outside capital cities that feeds mobile as well as fixed services (the backhaul network will get its own urgent $250 million kick under Rudd’s new plan). How the government-majority-controlled partnership uses that power will be just as sensitive as the way Telstra used its power over the last decade when, like AWA, it was government-majority-controlled. Will the public private partnership be any less fierce in defending its investment than Telstra, any more enthusiastic about still newer technologies that threaten the ones in which the taxpayer has a half-share?

Financial performance is a complicated risk for public private partnerships. Perform well and they are criticised for milking their privileged positions. Perform badly and they are belted for wasting taxpayers’ money. The government’s announcement commits only to more discussion about the regulation that will determine the price of access to the network. The delight about the plan expressed by the companies likely to be seeking that access suggests they expect the government-as-price-setter to be a soft touch.

AWA was no soft touch. One witness at a royal commission called it “the most hated firm in Australia,” adept at milking revenue from patent-licensing, while arguing this was nothing less than the taxpayers that received half its dividends would expect. The company performed well financially after the barren early years when it was building the infrastructure for the wireless services and paying no dividends. The market value of its shares more than trebled from the time of the recapitalisation in 1922 to January 1945. This was better than Australian stock prices generally, but it is impossible to tell from the available data whether this performance was generated by the international wireless services that motivated the original Commonwealth investment, or the new areas of the wireless business that opened up soon after it, especially radio broadcasting, which boomed in the late 1920s and 1930s.

Political support for the partnership was never universal or even widespread. Prime Minister Hughes got his way, but not without a massive fight in the parliament and inside his own party. A public–private partnership, argued his critics, was a “half-breed,” a “cross-breed,” a “hybrid,” like Hughes’ own party-hopping politics. “The people will find the money and the company will run the show,” predicted the leader of the Labor Party that Hughes had led himself just a few years earlier.

Within a year of its consummation, Hughes was forced to stand down as prime minister. But before he did, he took a crucial decision. The board of directors of the recapitalised AWA had to comprise three representatives of the Commonwealth, three representatives of the private shareholders and a tie-breaking seventh. Things started badly when the Commonwealth and the private shareholders couldn’t agree on the identity of the seventh director. The matter went to arbitration.

To resolve the deadlock Hughes decided to take the job himself. He kept it for the rest of his long life, even, briefly, after the Commonwealth sold its shares. Resisting all efforts to remove him, including a spirited one by John Curtin during the war, the political architect of this intensely political arrangement took it upon himself to keep it together for as long as he could. It turned out to be a very, very long time.

The global financial crisis has given Kevin Rudd the rationale and the opportunity to overturn the liberalisation-and-privatisation consensus that has dominated telecommunications policy around the world for the last two decades. In his recent essay for the Monthly, Rudd cited with approval Arthur Schlesinger Jr’s definition of a political economy cycle as “a continuing shift in national involvement between public purpose and private interest.” The coming new age, Rudd argues, will be neither the Keynesian model that dominated from the 1940s to the 1970s nor the neo-liberal one that followed, but a system of “open markets, unambiguously regulated by an activist state, and one in which the state intervenes to reduce the greater inequalities that competitive markets will eventually generate.”

This shift provides the rationale for a public private partnership in telecommunications rather than a wholly public or wholly private one that would have suited the first and second post-war ages. The global financial crisis has provided the opportunity for such a partnership by making it impossible for the private companies of the neo-liberal age to finance the kind of broadband network that Australians voted for back before the scale of the crisis became clear.

It is not yet known who the private partners in this relationship will be. But the identity of its public architect is very clear. Like Billy Hughes, Kevin Rudd has got himself a partner for life. •

Jock Given is Professor of Media and Communications at Swinburne University’s Institute for Social Research. His doctoral thesis at the University of Melbourne was about the early wireless entrepreneur and AWA managing director, Ernest Fisk. This piece is based on a longer article available in the November 2008 issue of Media International Australia.