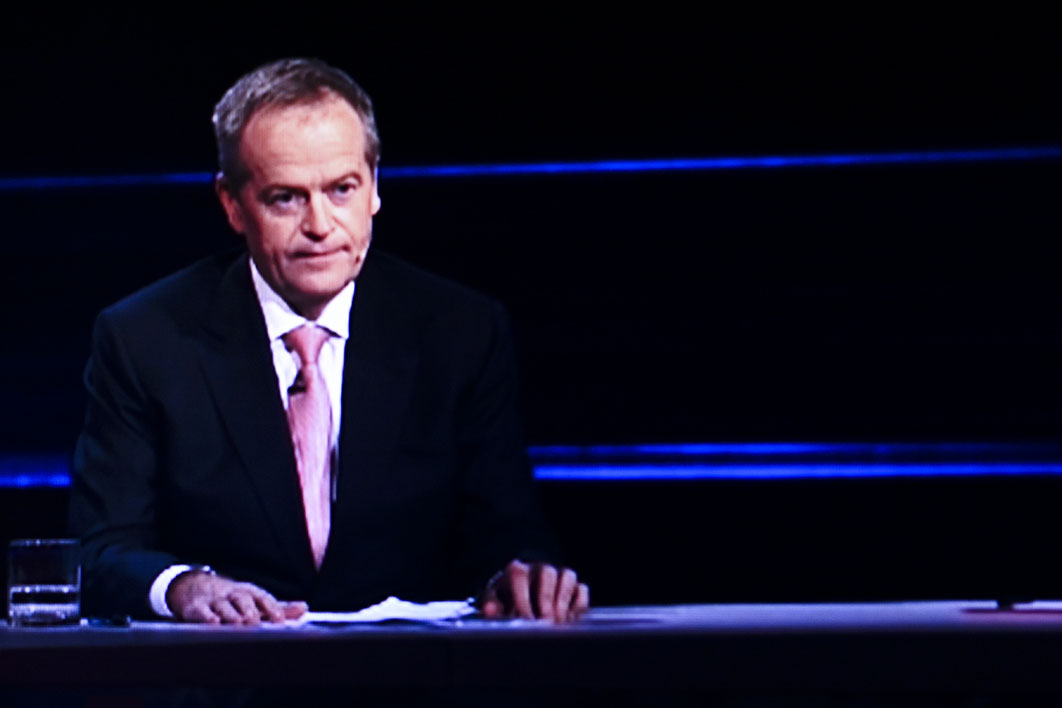 One reason this is a fascinating election — appearances sometimes notwithstanding — is the role reversal of the major parties.

Conventional wisdom suggests that Labor, as the frontrunner, should keep its head down, play safe, present a small target and focus maximum attention on its opponent’s weaknesses. That is what John Howard did in 1996, when, apart from swearing to “never, ever” introduce a GST, his best-remembered promise was to make people comfortable and relaxed. It worked a treat, giving him a landslide victory against the Keating government.

It also worked, with slight variations, for Tony Abbott in 2013, when he campaigned successfully on Labor’s perceived negatives, promising to axe the (carbon) tax, stop the boats and repay the debt. Like Howard he was full of reassurance, promising no cuts in most areas of spending — a commitment he broke promptly and spectacularly in his first budget.

Labor’s approach in this election is exactly the opposite. It is presenting a big target by promising tax increases, although Bill Shorten prefers to call them subsidies and gifts, in order to pay for a long list of spending programs while still delivering bigger budget surpluses than the Coalition.

It is a coherent policy package and, on paper, it should appeal to voters. The additional revenue comes overwhelmingly from higher-income earners, while the spending programs are spread more broadly. ln health, consistently ranked by voters as the most important issue, Labor is promising to reduce growing out-of-pocket expenses and reduce hospital emergency queues. More money is promised for childcare and early education. More university places will be created and upfront fees for TAFE students will be waived. And so on. By contrast, the Coalition, although it’s the underdog in the election, is largely offering more of the same, apart from tax cuts and a promise not to topple any more prime ministers.

While Scott Morrison has campaigned strongly, Bill Shorten is proving more than a match, being judged by audiences as the winner of the first two leaders’ debates. But Labor’s plan to use the campaign to put the final nails in the coffin of a government that was beyond revival is not running to plan. Instead the polls have tightened, though only slightly, leaving Labor clinging to a very narrow lead.

At public events such as the leaders’ debates and the ABC’s Q&A on Monday, Shorten has been dogged by questions about the impact of his tax changes and the cost of his promises. There is nothing more difficult in politics than taking benefits away from people. Largesse extended by a government in good times — tax-free superannuation or extending the tax rebate for franking credits to those who don’t pay tax, for example — quickly come to be seen as entitlements.

Shorten is right to say it’s a matter of priorities and that the benefits of the tax concessions go overwhelmingly to higher-income earners. But those who will lose money are guaranteed to complain the loudest, and they inevitably include a few who are relatively less well off. An Essential poll this week showed just 39 per cent support for Labor’s plan to “reduce tax concessions for investors and self-funded retirees,” though this was still more than the 32 per cent who opposed it. The other positive for Labor is that more people back its policies overall than those of the Coalition, by a margin of 46 per cent to 36 per cent.

But the leaders’ forums suggest a disconnect in voters’ minds between Labor’s spending promises and the paring back of tax concessions to fund them. Shorten has been repeatedly confronted with variations on the question: where’s the money coming from?

The real challenge for a Labor government will be to persuade the Senate to pass its tax changes, particularly its plan to restrict negative gearing for property to new home purchases from the start of next year, halve the capital gains tax concession, and limit franking credit refunds. While the Greens could be expected to support them, they are not measures destined to appeal to crossbench senators elected on pain-free populism.

Yet Labor still has cause for optimism about the election result. Going into the election as a minority government, the Coalition must win seats to stay in power. And Shorten has taken the negative gearing and superannuation changes to one election already, and he almost won.

Young people have enrolled to vote in this election in large numbers. They are more likely to benefit from Labor’s tax and spending policies than older voters, and many of them are motivated by the threat of climate change. Even if they vote for the Greens, most of this vote should flow back to Labor in preferences. Not that any of this is obvious in the opinion poll results to date.

Indeed, for all the media focus on the Coalition and Labor, the combined big-party support remains at remarkably low levels. According to the three main polls — Newspoll, Ipsos and Essential — between 36 per cent and 38 per cent of people intend to vote for the Coalition, compared with the 42 per cent that saw it just scrape into power at the last election. Labor’s support is between 33 per cent and 36 per cent, closer to the 35 per cent it received in 2016.

That means as many as 28 per cent of voters intend supporting minor parties and independents (with the caveat that some of the polls consistently overstate the vote for the Greens), compared with 23 per cent at the last election. A strong element in that is an “up yours” message to the major parties. Despite the multiple scandals surrounding One Nation, it has nationwide support of between 5 per cent and 7 per cent, and much more in Queensland. Presumably the billboard featuring Pauline Hanson saying “I’ve got the guts to say what you’re thinking” is resonating.

Despite the fact that Clive Palmer left his Townsville nickel refinery employees in the lurch, faces criminal charges brought by the Australian Securities and Investment Commission, and has a grab bag of policies that do not pass elementary scrutiny, Ipsos shows that 3 per cent of voters nationwide intend supporting him, and more in Queensland.

Though the latest Essential poll was conducted on Monday — just twelve days before the election — only 55 per cent of voters say they have been paying at least some attention to the campaign, and only 42 per cent in the case of eighteen- to thirty-four-year-olds. Unfortunately for Labor, the total includes the small but noisy minority most exercised about the loss of tax concessions.

The last opposition leader to think he was a sure thing at the election, only to come a cropper over his big-target strategy, was John Hewson in 1993. Bill Shorten’s comfort is that Hewson’s policies, including a GST and cutbacks to Medicare, went much further than his.

Having had the courage to announce what he intends to do, if Shorten wins he would have more moral authority to implement his program than any recent prime minister, though whether the Senate takes any notice of that is another matter. •