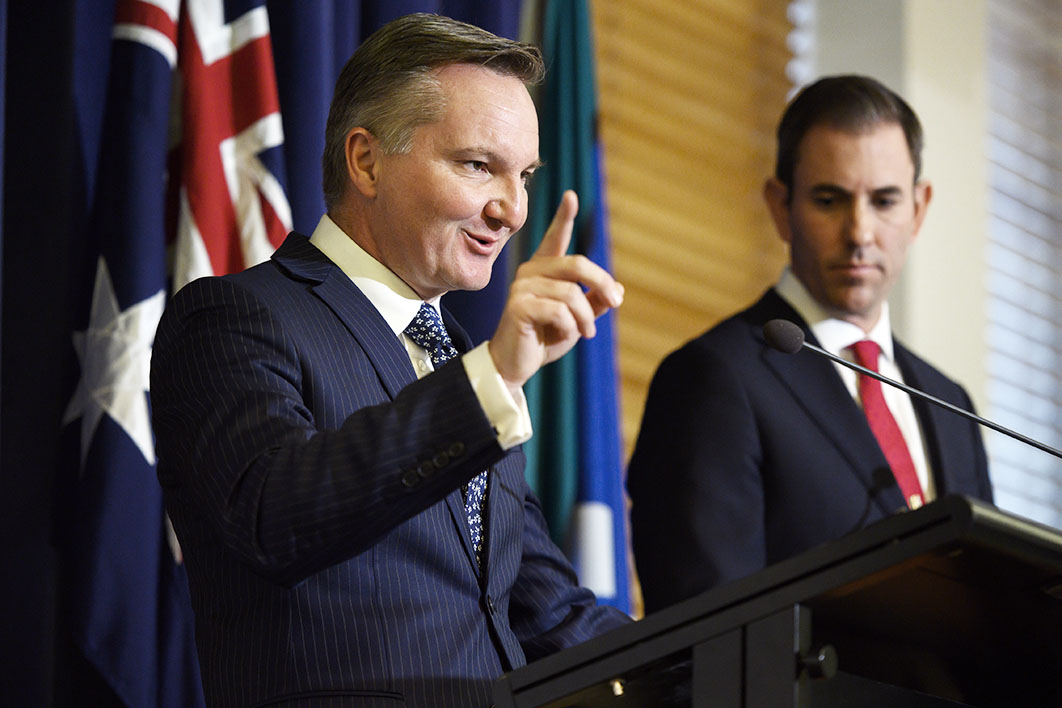 Labor estimates its fiscal plan will make savings worth $154 billion over the next eleven years — mostly by plugging tax loopholes. It says it will use $87 billion of that amount to increase the budget surplus and pay down debt. Arithmetic tells us that this leaves $67 billion for spending over that period.

Some decisions are left out or largely postponed: increasing Newstart, foreign aid, research funding and the refugee intake. If Labor wins the election, new spending needs will emerge — and tax cuts will suddenly appear as the next election approaches.

The income tax cuts Labor is offering now are so tightly targeted to low-income workers that they would cost the budget only $1.1 billion over four years. Shadow treasurer Chris Bowen and shadow finance minister Jim Chalmers say further tax cuts must wait until the budget surplus is back to 1 per cent of GDP. That will be in 2022–23, says Bowen, which looks optimistic on their numbers and Treasury’s projections.

A footnote in the plan tells us that on its “technical working assumptions,” if all goes well, a cool $200 billion would be available for tax cuts over the decade. But they’re not spelled out in this document — for good reason, since it is seriously bad policy for any party to make tax commitments six years in advance, as the Coalition has, when it doesn’t know what the state of the economy or the budget will be at that time.

The key thing this fiscal plan tells us is that when it comes to the crunch, Labor’s shadow economic ministers are running the show. Bill Shorten and other shadow ministers may entice us with a vision of how they will change Australia (as Shorten did memorably in his final answer in Q&A last Monday night), but there are only fleeting signs of that vision here.

The moral imperative of raising Newstart payments — which the ANU’s Ben Phillips estimates have now fallen $170 per week below the poverty line — is apparently such a complex issue that Labor can promise nothing except to review them if it wins the election.

It’s a similar story with research. Shorten and Kim Carr voice an ambition to raise Australia’s research spending massively to 3 per cent of GDP (close to the levels of the advanced manufacturing countries), but the only commitments here are $1 million for another review, and just $56 million over four years for new research infrastructure.

On foreign aid, Labor’s vision is an increase from 0.2 to 0.5 per cent of GDP, but on these figures the official aid program would grow only to 0.22 per cent in its first four years.

So what is Labor proposing to spend more money on in the next four years? The main beneficiaries are:

These are line-item costings by the Parliamentary Budget Office, and signed off by the same eminent trio of budget experts as Labor deferred to in 2016: James MacKenzie of Deloitte, Mike Keating, former head of the prime minister’s department and the finance department, and Bob Officer of the University of Melbourne. They can be taken seriously.

The spending items here account for the great bulk of Labor’s increased spending plans, and they amount to just $24.3 billion over four years: $6 billion a year in a budget that already spends more than $500 billion a year.

On the PBO’s estimates, they will be more than paid for by the tax increases and spending cuts Labor proposes. The key items, and their four-year savings, are:

The bottom line would see a minor increase in the budget surplus for the next three years, rising to a substantial one in 2022–23, when Labor scraps stage 2 of the Coalition’s proposed tax cuts. But as we’ve seen, Labor envisages coming up with tax cuts of its own at that time, so that substantial rise can’t be taken seriously.

Similarly, taking any significant action on Newstart would capsize Labor’s proposed gains to the budget balance. If its review proposed simply to lift the Newstart allowance back to the level of the poverty line — let alone lift it to the level of pensions — that would cost the budget about $6 billion a year. Yet until that is done, any budget surplus would be achieved only by condemning the unemployed to a life in poverty: and increasingly, abject poverty.

The fiscal plan also estimates Labor’s budget bottom line for the next eleven years, with the Coalition’s bottom line for comparison. These can’t be taken seriously: there are too many moving parts, too much is left out, and too much is simply unpredictable from this distance. To give you an idea, both Labor and the Coalition have pencilled in surpluses of more than $60 billion for 2029–30, which by then would be 2 per cent of GDP. Does anyone believe that?

Both parties’ costings have other sizeable problems. They start, as they must, with the baseline of the existing budget settings and the existing budget forecasts. A Labor government would inherit most of the problems and uncertainties highlighted in the recent post-budget commentary. These shroud future budgets with uncertainty, whichever side wins the election. They include:

• The budget assumptions that wage growth will soon return to its old average: up by 2.75 per cent next year, 3.25 per cent the year after, and 3.5 per cent in every year from then on. That’s quite a jump from its recent average of 2.1 per cent growth over the past four years.

Lower wage growth implies lower growth in the economy and lower tax revenues. It’s an obvious risk ahead. If Labor wins, Bowen said, he would ask Treasury to provide its “most realistic forecasts going forward” for wages and other variables for the economic statement he would bring down sometime in the September quarter.

• The spending forecasts are unrealistic. The existing forecasts assume no spending on new policy initiatives for the next decade, with spending on existing programs falling steadily, partly because of decisions already made by the Coalition government and partly as a result of the so-called “efficiency dividend,” which cuts departmental budgets each year by at least 1 per cent (in recent years, usually much more) with the stated aim of forcing departments to operate more efficiently. Labor itself estimates that all this amounts to spending cuts of $40 billion a year within a decade.

• It’s uncertain whether either side can get its tax plans through the Senate. I argued last week that neither will have a majority in the new Senate. While many different outcomes are possible, the most likely could see the remnants of the Nick Xenophon Team, now called the Centre Alliance, holding the balance of power. And Phillip Coorey of the Financial Review has reported that the Alliance senators Stirling Griff and Rex Patrick say they would reject most of the Coalition’s proposed tax cuts and Labor’s proposed tax increases. (The political comedy act known as the Australian finally covered one half of the story last week, almost a year after it was first reported by Coorey and highlighted by Inside Story. The Oz headed its belated catch-up “EXCLUSIVE.” Yes, the Australian alone finally caught up with the story a year after its rival.)

• The Parliamentary Budget Office has warned that the rapid growth in the number of aged people dependent on government spending will weaken the budget by $36 billion a year — yes, $36 billion a year — within a decade. It is not clear that this is factored into Treasury’s numbers.

• The global economy could be shipwrecked in that time. The Chinese economy could capsize. Our own economy could fail to weather the downturn in property prices. There’s no more uncertainty than usual, but it is an uncertain future.

It is essential to note, however, that these uncertainties apply equally to both sides. They are not unique to Labor, as some wrongly imply.

The bottom line is that Labor’s economic team has asserted its dominance over the idealists, and that future circumstances are more likely to tighten its grip than to loosen it. A Shorten government would have to face a lot of disappointed supporters, whose expectations have been raised by campaign speeches and promises only to be dashed by this, its real campaign policy.

Its failure to promise any interim increase to Newstart — such as the $75 a week rise suggested by senator Derryn Hinch — in my view is a serious mistake. Given the importance of the issue, fiscally and morally, it raises doubts about the credibility of both this budget plan and Shorten’s promise to raise Newstart. Labor’s policy would have been more sustainable in the long term had Bowen and Chalmers lost that battle.

That said, there is not much in this document that the government can target in political attack ads. It would be surprising if the polls released on Sunday and Monday do not show Labor poised for victory. •