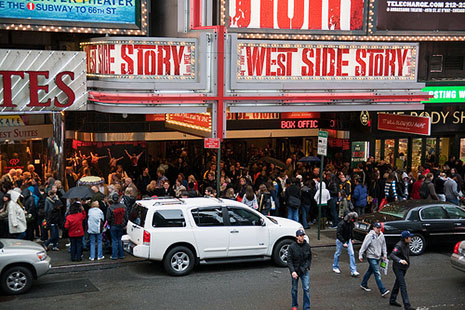 Back on Broadway: Fifty-two years after its first appearance, Leonard Bernstein and Stephen Sondheim’s West Side Story commenced another Broadway season in March 2009. Jason Kuffer/Flickr

STEPHEN SONDHEIM’s songs are too clever for their own good. They lack warmth and emotion. They try too hard to impress. There’s a cynical, show-off quality and you can’t hum them. Those are the standard criticisms of Sondheim’s words and music. The composer himself has heard them often enough and much of the time he would agree. Sondheim has no more persistent critic than Sondheim.

In particular, the older Sondheim is tough on the work of his younger self. In West Side Story alone he finds lines in “America” that “melt in the mouth as gracelessly as peanut butter and are impossible to comprehend.” He squirms as he admits that “Somewhere” places the most unimportant word of its opening line (“a”) on the most important note. And he confesses that he blushes to this day at a simple, Puerto Rican girl being forced to sing “It’s alarming / How charming / I feel.” These are lines that belong to “a character from a Noël Coward operetta” and are included only “because the lyricist wants to show off his rhyming skills.”

Sondheim also frets over a mis-stressed word at the climax of “Everybody Says Don’t” in Anyone Can Whistle. The line “I insist on miracles, if you do them!” stresses “if” when it should stress “you.” It bugs him still, but then, to Sondheim, mis-stressing is one of the cardinal sins of the songwriter, and in his new book, Finishing the Hat, he shows us example after example of this and other sins from the greatest songwriters of the twentieth century.

The book’s subtitle is “Collected Lyrics (1954–1981), with Attendant Comments, Principles, Heresies, Grudges, Whines and Anecdotes,” which means that it is also an autobiography, a brilliant collection of critical aperçus and a songwriting masterclass.

The stories certainly flow and the author tells them brilliantly. Jerome Robbins, directing West Side Story, objects to the orchestration of “Somewhere,” so Leonard Bernstein, who disliked confrontation and disliked Robbins, vanishes from the rehearsal leaving the antagonistic director to reorchestrate the song himself (Sondheim finds Bernstein in a bar). Hermione Gingold insists on auditioning for the role of Madame Armfeldt in A Little Night Music, in spite of the fact that Sondheim and the producer Harold Prince believe her to be quite wrong for the role and she knows that they think this. At the end, she points out that she is the same age as the character and that, like the character, she wears a wig. Whereupon, she whips it off to reveal a bald head and promptly wins the part.

You could buy this book for its lyrics and its anecdotes and not feel short-changed. Sometimes the stories and lyrics coincide, especially when Sondheim is writing for a particular actor/singer. In Gypsy, “Everything’s Coming Up Roses” was tailored to Ethel Merman’s brashness. “The Ladies Who Lunch,” Joanne’s song in Company, “was not only written for Elaine Stritch, it was based on her” (Stritch, already drunk, had once entered a bar with the writer George Furth in the early hours of the morning and said to the bartender, “Just give me a bottle of vodka and a floor plan.”) “Send in the Clowns,” a last-minute addition to A Little Night Music, was shaped by Glynis Johns’s inability to sustain a note: “Isn’t it rich? / Are we a pair?” are short lines followed by big breaths.

That’s the thing about Sondheim’s stories, they generally lead back to the masterclass, and that is the real meat of Finishing the Hat. He begins by laying down the principles he considers essential for a lyric writer. There are three of them: “Content Dictates Form,” “Less Is More” and “God Is in the Detail.” These are “all in the service of Clarity without which nothing else matters.” In a sense, the rest of the book is a series of case studies that demonstrate the importance of these principles and what happens when they’re not followed.

A song lyric, Sondheim points out, is not a poem. The lyric needs music, the poem already has it. It follows, then, that a lyric does not want to be too “poetic.” Plain, simple words are best – the right words, the kind of words the character singing the song might actually say – and they must make sense. It sounds obvious, but Sondheim lists hundreds of examples where songwriters have got it wrong.

He doesn’t pull his punches, but he lands them with great elegance. There are the too-clever rhymes of Cole Porter and Coward, the latter writing “lyrics I cordially but intensely dislike,” not least for their tendency to draw attention to themselves (which is presumably why Sondheim’s own lyric for “I Feel Pretty” reminds him of Coward). The trouble with such lyricists is that they are drawn, for the sake of the rhyme, into using the wrong words, or the wrong stress or twisting the syntax. He gives plentiful examples of this last habit, including Alan J. Lerner’s “syntactical train wreck” from My Fair Lady: “I’d be equally as willing / For a dentist to be drilling / Than to ever let a woman in my life” – this written for a character who has earlier demanded to know “Why can’t the English learn to speak?” And even if, for the most part, Lerner’s lyrics were “smooth and tasteful,” these were “virtues particularly inappropriate to Paint Your Wagon” and so once again the lyrics are at odds with the characters. It is all a matter of context (where content should dictate form) and therefore truthfulness. A lyric we can believe, that’s the thing.

Another lyricist who tries too hard is Ira Gershwin. Sondheim quotes the verse from “How Long Has This Been Going On?”

’Neath the stars,
At bazaars,
Often I’ve had to caress men.
Five or ten
Dollars, then
I’d collect from all those yes-men.

Sondheim complains: “In his insatiable need to rhyme, Gershwin surrenders sense (How often are charity bazaars conducted outdoors at night? Do women sell caresses – I thought they sold kisses – and why are the singer’s customers ‘yes-men’?); stress (‘Often I’ve had to caress men’); and syntax (by “Five or ten / Dollars, then / I’d collect…’ he means ‘Then I’d collect five or ten dollars’).”

One of Sondheim’s early mentors – almost a surrogate father – was Oscar Hammerstein II, but even he is not spared criticism. What does “a lark who is learning to pray” sound like, Sondheim wonders, and how might that differ from the sound of one that has already learnt to pray?

But it is Richard Rodgers’s first lyricist, the brilliant Lorenz Hart, for whom Sondheim reserves his most carefully considered criticism. Brilliant he may have been, but he was lazy without a doubt. Sondheim lists numerous sins committed by Hart, ranging from the sacrificing of meaning for rhyme (“Your looks are laughable / Unphotographable” – of course he means unphotogenic), to tortured syntax (“An angel I married / To heaven she’s carried / This fellow with a kiss”), to a cornucopia of mis-stressed words and syllables (“Seven to midnight I hear drums” and “Psychoanalysts are all the whirl”). Mis-stressing is such a bugbear for Sondheim that one pictures him choking on his breakfast recently as he read the review of this book in the New York Times from the same pen responsible for the lines “Because a vision softly creeping / Left its seeds while I was sleeping.”

Sondheim quotes another (unnamed) writer of pop songs: “I’m not a great believer in perfect rhymes. I’m just a believer in feelings that come across. If the craft gets in the way of the feelings, then I’ll take the feelings every day.”

“I’ve never come across a near rhyme that works better than a perfect one would…” Sondheim remarks. “[C]raft is supposed to serve the feeling.” If it doesn’t, the craft is either deficient or the writer is being lazy. Like Lorenz Hart.

Sondheim likes journeyman lyricists such as Irving Berlin and Dorothy Fields and he believes in hard work. He has stockpiled his favourite thick pencils and yellow legal pads for fear that one day he might be unable to buy them and now he has a lifetime’s supply. And if he claims to prefer working lying down so he can fall asleep, this is partly a recognition that songs don’t come easily or quickly.

The song that gives this book its title comes from Sunday in the Park With George, a show dating from 1984, so just outside the scope of the present volume. In a single, glancing reference to it, Sondheim insists that it is “the only song I’ve written which is an immediate expression of a personal internal experience.” I suspect it is more than that.

“George” is the French post-impressionist painter, Georges Seurat, and in the first half of Sunday in the Park he is painting his great study of Parisian society “A Sunday Afternoon on the Island of La Grande Jatte.” Indeed it might be truer to say that he is living it. “Finishing the Hat” is George’s song and it expresses – simply, clearly and in everyday words and images that rhyme and scan and stress the right syllables – how it is to feel driven. Yes, to some extent it glorifies the creative act, but apart from in its final line there is no elation, no satisfaction, no gloating. It is a song about work: not about finishing the hat at all but about how you have to finish the hat (my stress!) and how everything and everyone else must wait. And so it is also about the selfishness of the artist, even as the artist is engaged in the generous act of making “a hat / Where there never was a hat.”

Like George, Sondheim knows that selfishness is unpardonable and rarely goes unpunished, but he also knows that, without it, art – music, lyrics – would be a series of unfinished hats.

That’s the point of the song, and really it’s the underlying subject of this book. •