Armed with a historic mandate, can Jacinda Ardern bring about the change she promised in 2017? 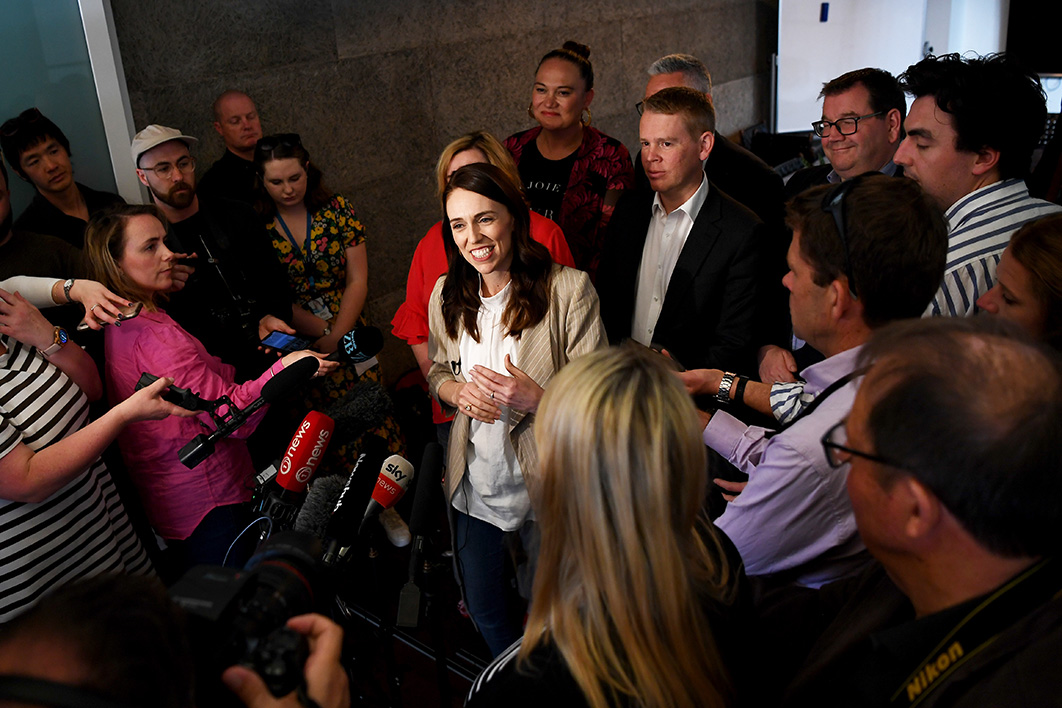 NZ prime minister Jacinda Ardern talks to journalists yesterday after a meeting with members of her party in an Auckland cafe. Hannah Peters/Getty Images

The big question mark over Jacinda Ardern’s second term as NZ prime minister is whether she can make good on her December 2017 declaration that she would lead a “government of transformation.”

Her government’s first three-year term was more a repair shop than an innovative enterprise of deep reform. Now Labour has a majority in its own right — sixty-four seats of 120, according to Saturday’s election-night count, from an extraordinary 49.1 per cent support under New Zealand’s two-vote mixed-member proportional system.

So will we see real action on climate change? Ardern called that “my generation’s nuclear-free moment” in 2017, evoking the famed nuclear-free legislation of David Lange’s 1984–90 Labour government, which reduced the ANZUS treaty to only Australia and the United States.

And will she make good on finance minister Grant Robertson’s “wellbeing budgets,” which he has today signalled he plans to continue? “Wellbeing budgets” are intended to bring measures of environmental, social and human capital into calculating how well the government and the country are doing. Put fully into effect, this change could be transformative, but whether Labour will do that is the big second-term question.

In her first term Ardern was constrained by New Zealand First, led by old-time populist Winston Peters. Peters campaigned on having been a “brake” on Labour and the Greens, and promised a repeat. He has gone: New Zealand First crashed to 2.7 per cent, far below the 5 per cent threshold needed to get seats.

Ardern’s other support party in the first term, the Greens, won ten seats from 7.6 per cent of the party vote. Ardern has been coy since election night about whether she will bring them into a governing arrangement.

The opposition National Party crashed to thirty-five seats, from 26.8 per cent of the party vote, bleeding votes to the libertarian right-wing ACT party, which multiplied its single 2017 seat to ten (from 8.0 per cent). National lost fifteen electorate seats to Labour and one to the Greens.

Seventy-two electorate seats are awarded to the party that gets the most votes in the electorate (the electorate vote). The other forty-eight seats are “list” seats, apportioned to parties in proportion to their share of the total party vote.

The immediate challenge the government faces is navigating the social and economic challenges thrown up by Covid-19. On current Treasury projections, measures to keep the economy afloat after the loss of tourists and students to the border closure mean that net government debt will climb from just under 20 per cent to over 55 per cent of GDP.

Ardern declared on election night that she had a mandate to push on with the response to and recovery from Covid-19. Her focus is on generating jobs (unemployment is now forecast to peak at between 7 and 9 per cent), upskilling people for those jobs, maintaining primary product exports and eventually reopening the border to higher-value tourism.

This is in the context of a fraying global order and an overdependence on China for exports and tourism. On the plus side for New Zealand are Ardern’s personal contacts from her time as president of the International Union of Socialist Youth in 2008, and her international acclaim for her handling of the March 2019 Christchurch mosque massacre and her competent leadership of the Covid response (though senior officials say she has not made as much use of her contacts as she could have).

In her first term Ardern persuaded the farmer-and-business-sensitive National Party to agree to a target of net zero carbon emissions by 2050, together with a climate commission to draw up five-yearly “budgets” of emissions reductions and a new monitoring regime.

Changes to New Zealand’s emissions-trading system have pushed the price per tonne of carbon from as low as NZ$2 in 2008–17 to NZ$35 recently. Whether agricultural emissions, mainly of methane, are to be brought into the system is to be decided by 2023; though that seems likely, the mechanics have yet to be finalised with farmers’ representatives.

The government did increase spending and investment in health and education services, hospitals and schools, public housing and social welfare, and ramped up plans for physical infrastructure, principally for roads but also for rail. But a shortage of houses, coupled with ultra-low interest rates (the Reserve Bank’s cash rate is 0.25 per cent and it has a NZ$100 billion bond-buying program), has continued to drive up house prices — by 11.1 per cent in the twelve months to September.

Despite this, Robertson has stuck to his orthodox support for the Reserve Bank’s independence. And he and Ardern have qualified their plans for increased health, education and welfare spending with a determination not to let government debt get out of hand.

Ardern characterises that fiscal conservatism as furnishing what she has called a “licence to govern” — a licence, that is, from sceptics and businesses. In fact, even if net government debt does go over 50 per cent of GDP, that will be below where most advanced-economy countries were before the pandemic took hold.

Ardern and Robertson have been restrained on the revenue side, too. In the election campaign Labour promised to lift the top tax rate from 33 per cent to 39 per cent, but only on incomes above NZ$180,000. Last year Ardern abandoned plans for a tax on income from capital gains, saying there was no mandate for it. But by ruling out one while she is Labour leader she effectively ruled out trying to build a mandate. She categorically opposed a Greens campaign proposal for a wealth tax.

On both tax and welfare, Ardern has fallen far short of changes proposed by expert working groups she set up. Nevertheless, she declared during the campaign that she would push increased social investment in a second term. She, Robertson and Shaw insisted to me in August that they were still committed to the “wellbeing” approach, even while the word was scarcely to be heard.

In July the government inserted the three additional measures — environmental, social and human capital — into the Public Finance Act, requiring Treasury to report on them. In effect, this will put some focus on a wider notion of prosperity than GDP. But getting rigorous statistics to underpin the measures will take time — in some cases years — assuming they can be developed.

If Ardern and Robertson can pull that off, they might build this different way of thinking about the economy into the language of politics. That would be transformative.

Certainly, Ardern has tons of political capital to invest in the wellbeing project — if she chooses to. That will be one big test of her second term. •

Colin James is a political journalist of more than forty years’ experience, and a senior associate of the Institute for Governance and Policy Studies at Victoria University of Wellington.