Looking for an electoral messiah

“Leadership” is seldom the key determinant of election results, writes Brian Costar. The mistaken belief has damaged both major parties

Robert Menzies, shown here at the opening of Canberra’s Kings Avenue Bridge in 1962, is the only Australian prime minister to have retired of his own accord.
National Library of Australia nla.pic-an14324452-175 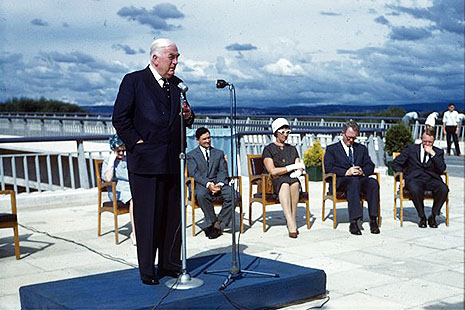 Robert Menzies, shown here at the opening of Canberra’s Kings Avenue Bridge in 1962, is the only Australian prime minister to have retired of his own accord.
National Library of Australia nla.pic-an14324452-175

READING Australian newspapers, watching TV, listening to the radio or browsing news sites online, the message is the same. Elections are decided by voters’ feelings about the leaders of the big parties. “Preferred prime minister” is the poll result to watch; voters’ liking for a leader will surely shape their votes.

But the evidence from political science research gives a different picture. There, policy issues and old-fashioned party identification exert much greater influence than voters’ feelings about individual leaders. This isn’t to say that leaders are irrelevant. If the jury is still out on whether Australia now has a “presidential” system, no one doubts that leadership is much more personalised than in the past, driven by a wider culture of celebrity fed by the news media, women’s magazines, reality-TV shows and the adoring treatment of sportspeople.

Although prime ministers can no longer be described as “first among equals” in their ministries, electoral appeal doesn’t necessarily translate into power in government. Even the most powerful prime minister can be removed, as Winston Churchill and Margaret Thatcher found in Britain and Bob Hawke in Australia.

Of Australia’s twenty-seven prime ministers, only Robert Menzies retired entirely of his own accord. Death, electoral defeat and, most importantly, party-room coups claimed the rest. Between 1949 and 1972 the big parties (Liberal, Labor and the Nationals’ forerunner, the Country Party) had eleven federal leaders among them, of whom only one, John Gorton, was removed by his own party. But between 1972 and 2013 the same parties had twenty-nine leaders, fifteen of whom (or a shade over half) were ousted by party-room coups – two of them in the last three years.

How can we explain the vast disparity in these numbers? It’s simple: the obsession of politicians and party managers with the personality-based opinion polls that have become a prominent feature of political life. This obsession with polling and focus groups led to the demise of over half of the big parties’ leaders between 1972 and 2013. If we include the Australian Democrats, whose members dispensed with ten leaders between 1986 and 2008, the figure is even more startling. Stephen Mills is definitely on the money with his observation that opinion polls are now “a weapon used by [party] factions in leadership battles.”

Party strategists clearly believe that leadership is everything and package their election campaigns accordingly. And that’s how the media report it: just count the number of times the print media frame their stories as Rudd vs Abbott. But is that how the voters see it?

Political scientists Ian McAllister and Juliet Pietsch used 1987–2010 data from the Australian Election Study to identify four drivers of voting choice: leaders, party identification, local candidates and policy issues. Policy was by far the strongest, with an average of 52 per cent over six elections; candidates was the weakest with just 7 per cent. Party identification stood at 25 per cent and leaders came in third at 15 per cent.

This finding was reflected in a phone poll conducted by the Swinburne Institute of Social Research on election day 2007. Out of a total of 774 respondents, 161 reported that they had switched their vote from the Coalition in 2004 to Labor in 2007. They were then offered thirteen issues and asked to rank them according to their importance in their voting decision. Industrial relations and climate change were near equal at the top; leadership was at the bottom of the list. And this was supposed to be the Kevin ’07 election.

As well as asking people their voting intention, it is commonplace these days to ask voters to record their perceptions of the party leaders’ popularity and/or competence – the assumption being that whoever is more highly rated will win the election. But this doesn’t always hold. In 1993 John Hewson was rated higher than Paul Keating but lost the “unloseable election.” In both 1998 and 2001 Kim Beazley was ranked above Howard and lost. (Peter Brent at Mumble provides an election-by-election analysis of leader popularity versus election result.)

The Australian Election Study data also show that we don’t generally think much of our political leaders. On an ascending scale of 0 to 10 at all elections since 1987, Kevin Rudd had the highest score of 6.3, in 2007, and Keating the lowest of 4.7, in 1993.

Julia Gillard was dumped as Labor leader and prime minister on 26 June 2013 because the polls had Labor’s two-party-preferred vote stuck at around 43 per cent and her personal rating was at a near record low. The return of Kevin Rudd has apparently lifted the vote to around 47 per cent. This will not avert defeat on 7 September, but it will probably be enough to deny the Coalition a Senate majority.

Why did the return of a dysfunctional prime minister boost Labor’s standing in the polls? First, the negative attitude to Australia’s first female prime minister was unprecedented. A perusal of social media sites reveals deranged misogyny and low-quality pornographic filth, and some of this even entered the mainstream media. It’s also quite possible that while many voters approved of parts of the Labor agenda such as the National Disability Insurance Scheme and Gonski’s proposal for schools, the unrelenting hysteria about Gillard, combined with her poor communication skills, negated the impact of popular policies, and her removal allowed those positives to breathe.

Why did Labor get itself into such a political fix? Because, instead of seriously addressing issues of policy, philosophy and party regeneration when it was in opposition between 1996 and 2007, it went messiah-seeking and churned through five leaders, one of them twice. •

Gonski has come to symbolise a sense of social decency, writes Dean Ashenden. But how much “Gonski” is left in the plan, and how will it look after the election?

Still giving a Gonski? Kevin Rudd and his education ministers at Aquinas College in Melbourne on 23 July after the prime minister announced that Catholic schools have signed up to Gonski. David Crosling/AAP Image 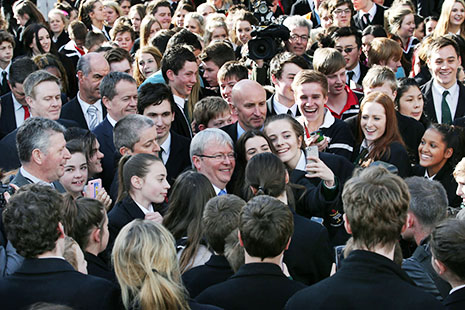 Still giving a Gonski? Kevin Rudd and his education ministers at Aquinas College in Melbourne on 23 July after the prime minister announced that Catholic schools have signed up to Gonski. David Crosling/AAP Image