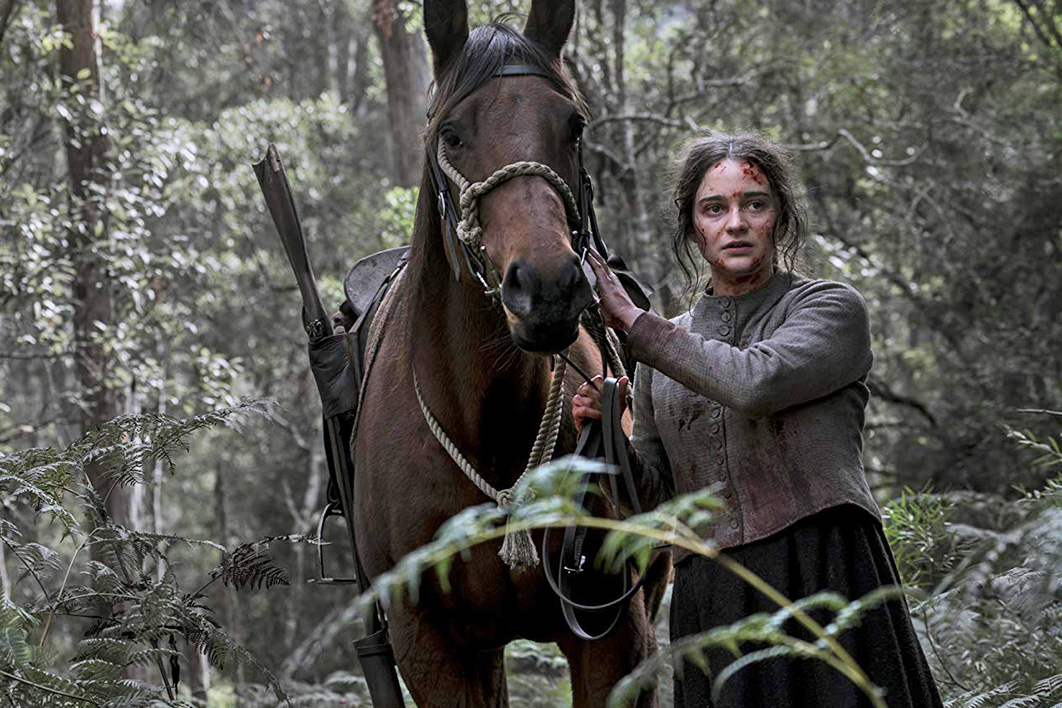 To begin with the obvious: birds are everywhere in Jennifer Kent’s The Nightingale. They flit through the haunted dreams of Clare (Aisling Franciosi), the convict woman chasing her murderous abuser across the nightmare landscape of Van Diemen’s Land’s near-genocidal black war of the 1820s. Billy (Baykali Ganambarr), the young Aboriginal man whom Clare coerces then bribes to become her guide, sees them too. A Letteremairrener man from near Fort Dalrymple, his name is actually Mangala, or blackbird. At a certain point he even dances his identity for her.

Are we so transfixed by the murderous violence that begins the film that we entirely miss the poetry? I can’t find any review that notices it. Indeed, David Edelstein in the Vulture pronounces that “metaphor is absent from The Nightingale, unless you think Clare’s singing fits the bill.” Well, it does, actually. The song she sings — set to “The Bold Grenadier,” sometimes known as “The Nightingale” — has descended from one of the oldest myths of western Europe: the tale of Philomela.

As told by Ovid in Metamorphoses, Philomela is raped and imprisoned by her brother-in-law, King Tereus, who cuts out her tongue so she may not speak of his crimes. She gets word to her sister, Procne, and together they take a terrible revenge. Then she — or they — turn into birds and fly away.

From that point on, the nightingale became a symbol of the revenge taken by an abused, forsaken and silenced woman. Musicians, artists and poets alike — from Wordsworth and Coleridge to T.S. Eliot and, yes, Margaret Atwood, the current high priestess of tales of gendered violence — have drawn on the story. In directing our attention to the fact that many Aboriginal creation stories are also about metamorphoses, Kent doesn’t seek to appropriate them. Indeed, though they are not explored here, there are many other tales of sisters who change form and fly away.

In putting the dynamics of rape and control up front, Kent does take risks. When Clare sings her song, in a borrowed dress, for a banquet in a rough mess hall in colonial Van Diemen’s Land, she is there at the behest of Lieutenant Hawkins (Sam Claflin) to entertain his commanding officer. She does his bidding because she wants to be free. Her Irish convict husband, Aidan (Michael Sheasby), has served his time and is due his ticket of leave. When she dares ask Hawkins to sign the papers he takes it as insolence. His response is ugly, and what’s on screen neither glosses it nor eroticises it.

A second, much more brutal and punitive rape occurs after Aidan confronts Hawkins about his papers. There’s a murderous brawl, and a child is killed. Hawkins is eligible for promotion but cannot control his men, and the melee brings a reprimand from the visiting major. When a letter arrives notifying Hawkins that his promotion is refused, his fury is unleashed. He will ride across the island, through the war zone, to plead his case.

It’s a strong opening, to be felt more than feared. Aisling Franciosi, giving chase, alternately pursued by and pursuing Hawkins’s party, is magnificent in her grief and furious rage. The film becomes formidable, and problematic.

Kent is trying to do a lot here. She has made it clear, in interrogating the roots and dynamics of violence, that she is also trying to tell a tale of change. How does the anger, the desire for revenge, the thirst for violence give way to something different? It is the question of our times, because the violent abuse of women and children, usually by those known to them, is rising. That much is clear from current research, analysed in Jess Hill’s groundbreaking See What You Made Me Do.

Noticing parallels between the experience of a raped, colonised white woman and a black man whose people are being systematically murdered and dispossessed of their lands, Kent dares to imagine a kind of détente. Both hate the English. Both have lost their families, have been taken from their land, and must speak others’ languages. (Clare’s original language is Gaelic; Billy’s is Palawa Kani, a language once recorded in Tasmania and resurrected for this film.)

In imagining this relationship Kent runs a big risk. She skirts dangerously close to evoking the “faithful Jacky Jacky” myth, the old colonial fantasy of the Aboriginal tracker who guides a white hero across the frontier. But she is not showing us a friendship; rather, she is imagining an alliance, a temporary one, in an epic journey.

The nightmares Clare has along the way are among the film’s most striking images: she is a lactating woman, maddened and mourning. The claustrophobia of the closely timbered Tasmanian wilderness is beautifully evoked by the cinematography. But though her distrust of Billy gives way in the face of his reluctant compassion, I could not always believe in the relationship.

Despite the work the filmmakers have put into this — the research into language and costume, the advice from Aboriginal elders of Tasmania — the way Clare and Billy coexist in these scenes does not always ring true. Though I did enjoy the way Billy appears and disappears, quite suddenly.

In many traditional communities Aboriginal people don’t look directly at strangers; they wait, they are silent, they watch sideways and make their judgements. In the screen format, Academy ratio, that Kent and cinematographer Radek Ladczuk have chosen, there appears to be no space for this. The choreography seems oddly cramped, and it’s not helped by the dingy grey digital masking used in today’s multiplexes to screen films shot in this ratio.

But The Nightingale raises big questions. Reviewing the film in the Guardian, Larissa Behrendt argues that in comparing the colonial experiences of women and Aboriginal people, Kent has strayed into a minefield she is unable to navigate convincingly:

Every societal group that is co-opted in the colonial process suffers in a different way, but it is dangerous to link those marginalised within the colonial state to those being colonised. The sliding scale of suffering among those within the colony makes little difference to the Aboriginal group whose land they stole.

Aboriginal women, meanwhile, are left in the usual trope. We see only one. Lowanna (brought to life by the luminous Magnolia Maymuru) is raped and then murdered, with no characterisation. All we know is that she is even more disposable than both white women and black men.

What Kent is suggesting, I believe, is that an empathetic imagination is needed to overcome racism. This is the leap Clare makes when she sees a black woman raped before her eyes. Kent is not suggesting that the experiences are equal. But if we are to undertake this work of reconciliation we will need to use our imaginations. If not now, when?

And finally: I wish this had been a television series. The space the story required, the additional characterisation needed, the at-times cramped choreography and curious flatness at the end — all this would have worked very differently given the space a streamed series allows. Was it ever considered, I wonder? •

The wrong kind of momentum in Indonesia? 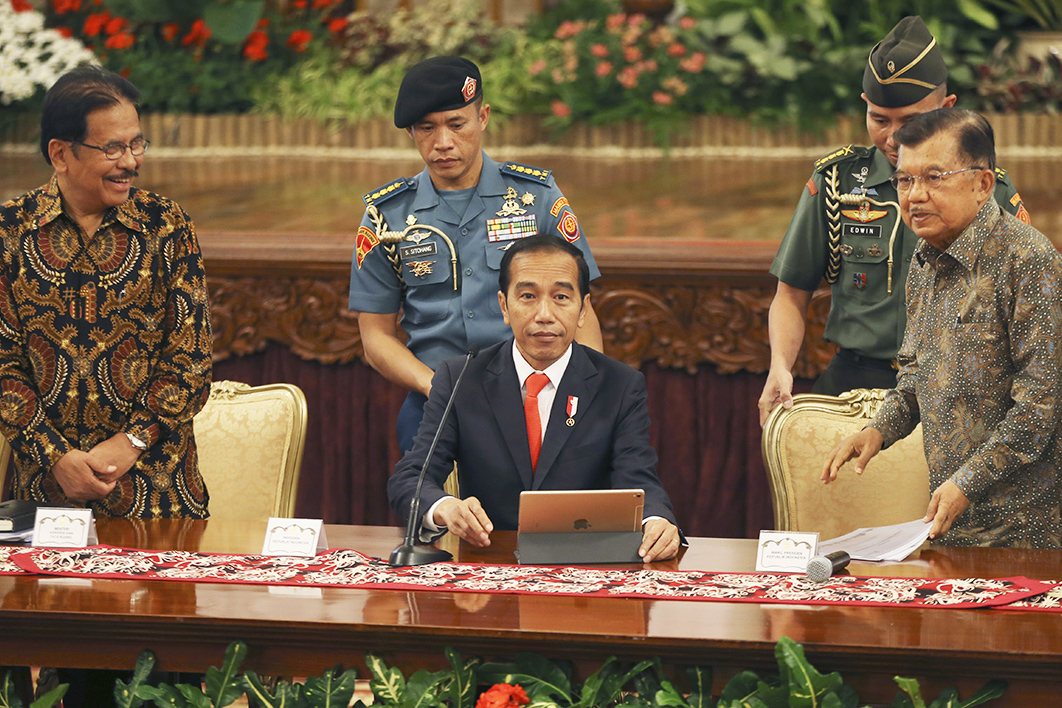