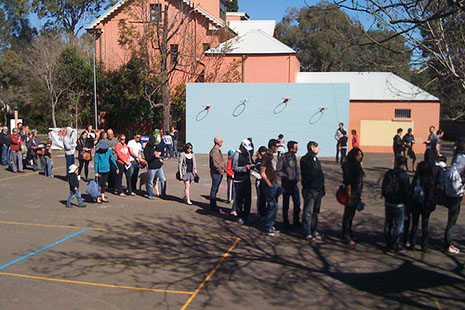 NOW THAT the final tally for last month’s election is almost complete it’s possible to get a better sense of what was different about this poll and what the implications are. As far as participation in the election goes, the picture that emerges from the data isn’t encouraging.

As Tim Colebatch reported in the Age this week, “More voters refused to vote than at any election since 1925, the first election at which voting was made compulsory.” The “boycott rate” was highest in safe Labor seats, according to Colebatch, which accounted for twenty-three of the thirty seats with the lowest attendance. Among those who did make it to a polling booth, the rate of informal voting was the second highest on record. “Last time 511,000 voters cast informal votes. This time 729,000 did so.”

Colebatch attributes the high informal vote to the influence of Mark Latham – and the rate certainly appears to have been highest in Labor-held seats in western Sydney. Psephologist Peter Brent disagrees about the cause, though not about the figure. In his electoral blog, Mumble, he shows how “since the mid 1990s informal votes have been steadily rising… In fact, the question seems not to be why they increased this year, but why did they drop from 5.2 per cent in 2004 to 4.0 in 2007?”

Whatever the cause of the higher rates of abstention and informal voting, they are only part of a bigger picture in which a combination of factors – nineteenth-century enrolment technology, the Howard government’s 2006 electoral legislation and an increasingly mobile population – means that an estimated 21 per cent of eligible adults, or over one-in-five, didn’t fill in a ballot paper that could be entered into the count. That’s equivalent to thirty-three federal seats.

The problem starts with the state of the electoral roll. Enrolment is still largely paper-based and requires the eligible citizen to take action to assert his or her entitlement to vote. This contrasts with the Australian Electoral Commission’s much more proactive approach to removing people from the roll if they move house without doing the paperwork. This means that it’s easier to be taken off the roll than added to it, so it’s no surprise that the number of eligible adults missing from the roll has risen from around 1.1 million at the last election to over 1.4 million this time. Automatic enrolment – adopted over the past twelve months by Victoria and New South Wales – would go a long way towards solving this problem. It’s simply the obverse of what the AEC already does when it automatically de-enrols voters, yet has been fiercely resisted by the federal Coalition.

Then we need to add in the boycotters identified by Colebatch. At the last election the AEC’s figures showed that around 620,000 enrolled voters failed to vote; this time, the figure is just over 956,500. Informal votes contribute a further 729,000 to our total.

One other figure needs to be added. Voters who arrive at a polling booth and find their name missing from the roll (for any of a number of reasons) are entitled cast a “provisional vote.” They fill in a ballot paper and lodge it in a sealed envelope with personal details and their signature on the outside. Later, the AEC checks these details to determine whether the vote can be admitted to the count. In 2004 the admission rate for these votes was around 50 per cent. After the Coalition’s 2006 legislation, which requires these voters to present photo ID either at the polling booth or at an AEC district office by the following Friday, the rate of admission fell to 26 per cent in 2007 and 36 per cent this year. This means that 130,349 people cast a provisional vote that was not counted.

If we add up those who were eligible to vote but not on the roll, those who were on the roll but did not go to a polling place, the accidental and deliberate informals and the provisional non-admissions, over 3.2 million eligible Australians didn’t cast a vote – extraordinary for a country that has compulsory enrolment and compulsory voting. The easiest group to deal with is the 1.4 million-plus who aren’t enrolled. For that to happen, the federal opposition needs to join its NSW party colleagues in supporting the introduction of automatic enrolment. •

Brian Costar is Professor of Victorian State Parliamentary Democracy in the Institute for Social Research at Swinburne University of Technology, and Director of the Democratic Audit of Australia–Swinburne. Peter Browne is editor of Inside Story.

All fibre, all the way!

At the Imperial Palace, Human Nature is gearing up for two more years of “Celebration of Motown.” But further along The Strip it’s fibre-to-the-home that’s generating the excitement. And Australia’s NBN is one of the stars, writes Jock Given in Las Vegas

Above and beyond: an EPB Fiber Optics van at the Chattanooga Farmers Market. Its fastest internet just got faster. Larry Miller/Flickr 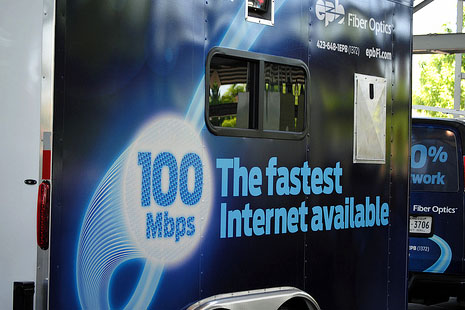 Above and beyond: an EPB Fiber Optics van at the Chattanooga Farmers Market. Its fastest internet just got faster. Larry Miller/Flickr