Mitchell, Murdoch and me

A critic-turned-employee of the Australian recalls the highs and lows of dealing with Chris Mitchell, editor-in-chief 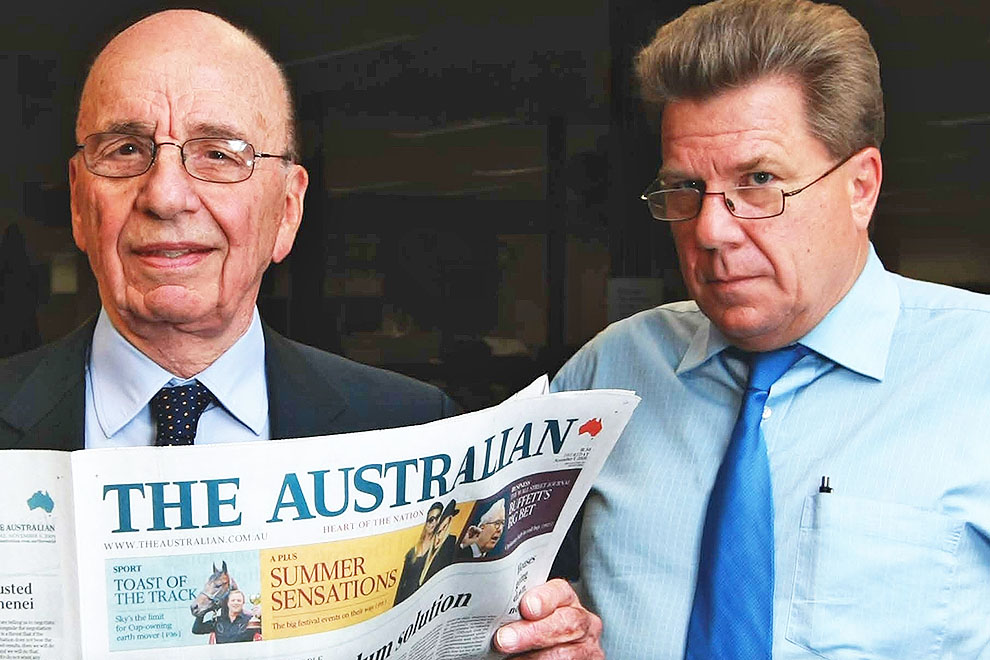 The personal is the political: Chris Mitchell with Rupert Murdoch, from the cover of Making Headlines.

When I answered the phone on 11 July 2007 it was Chris Mitchell’s personal assistant on the line. It turned out to be a courtesy call from the Australian’s editor-in-chief to inform me that I would be starring in the next day’s editorial — and not pleasantly. It would consist of a demolition of online critics of the newspaper — mostly me, complete with photo — in retaliation for the horrid things I’d written on my website about how the paper reported its fortnightly opinion poll, Newspoll.

This wasn’t the first phone conversation I’d had with Mitchell. That had been the previous December, after I’d emailed him out of the blue about a Newspoll pitting a hypothetical Kevin Rudd–Julia Gillard Labor leadership team against the incumbents, Kim Beazley and Jenny Macklin. (Why were there no figures on voting intentions, I wanted to know.)

That email had resulted, to my surprise, in an hour-long chat, in which Mitchell schmoozed and flattered and tried to get me to see things his way. He obviously spent a lot of time reading online opinions about his newspaper.

Any dividends from that December charm offensive were short-term, because here we were eight months later. Rudd was leading Labor and rampaging against the Howard government in the polls, and the Oz was still clutching at Newspoll straws. You can read the comments that sparked the call online. (scroll up for subsequent developments.)

That July conversation got quite heated and ended, I think word for word, like this.

Mitchell: “I’m going to go you so personally!”

For the rest of the day my imagination ran wild, conjuring up visions of an investigative unit digging up embarrassments from my distant past. But when the editorial was uploaded early the next morning, the long rant — the social media are parasites; we are the best in the business; we know Newspoll — pulled its punches in its treatment of me. Mitchell explained later that he’d cooled off. There was no photo.

This event, which academic Sally Young calls the “the July 12 incident,” has been described as “indicative of the emerging crisis in professional journalism as the traditional ‘gatekeeping’ prerogatives of large media organisations are challenged in an age of Web 2.0 technologies and internet journalism.”

Maybe. It led, I believe, to the resignation from the paper of blogger Tim Dunlop, after his response was pulled from the Oz’s website.

Since then, editorials like that have become a regular feature of the paper, only these days the target is Twitter.

Correspondence between Mitchell and me continued for several years; my email folders contain sixty-nine emails from him between 2007 and 2010, the large bulk in response to requests I’d sent about Newspoll. Sometimes these elicited phone calls instead (always through the PA). He regularly sent me Newspoll results on the night before publication and allowed me to post them even before the newspaper did. Was I bought off? I did largely stop criticising Dennis Shanahan’s Newspoll coverage.

Fast-forward to budget morning 2010. Chris and I are having breakfast at Canberra’s Hyatt Hotel and he’s hiring me to join the paper as a blogger. Charm setting dialled up, he drops several confidences: that the 2006 leadership Newspoll I’d criticised had come after a request from Rudd, phoning from the Great Wall of China where he was in the company of Simon Crean and Kim Carr (since revealed to the reading public by Mitchell himself); that Rudd, after becoming prime minister, had wanted Shanahan to be his chief of staff (later revealed by Peter van Onselen); that Mitchell had wanted to hire Annabel Crabb but reckoned he couldn’t compete with the ABC’s financial largesse.

I, of course, was much more affordable, and would start in July. Just do what you’ve been doing, he said, write whatever you want, “but don’t bag Dennis.”

I got a floating desk in the Canberra bureau and became, more or less, just another employee several rungs down. Regular email correspondence was no longer appropriate.

But I did retain some special privileges.

At that May breakfast, Mitchell said I should go to him with any work issues that couldn’t be resolved to my satisfaction. In 2011 I took up this offer when a directive arrived from the editor (one rung down from Mitchell) that I should stick to writing about polls and numbers and leave the wider commentary to others. An email from me to the editor-in-chief boss saw the instruction comprehensively and emphatically reversed within hours.

And aside from requests for particular stories for the print edition during the 2010 campaign, and one during Barack Obama’s 2011 trip (about previous Newspoll boosts after presidential visits), I did enjoy carte blanche. Self-censorship, conscious and otherwise, is of course another matter; I certainly didn’t disparage the paper’s reporting of Newspoll (or of anything else, but my self-imposed purview had always been quite limited). Any conflict of interest had greater influence on my words on Twitter, where comments tend to be more wide-ranging. When, for example, Rupert Murdoch started tweeting, I regularly had to bite my tongue.

Anyway, Mitchell retired last December after almost fourteen years as the paper’s editor-in-chief and then wrote a book called Making Headlines, published this month. Most of the interesting gossipy titbits, about his interactions with prime ministers, have already been excerpted or reported. Of course it’s a self-serving tome — why else do people write books about themselves? — but it’s not an especially self-aggrandising entry in the genre. Compared to, say, former Sunday Times editor Andrew Neil’s Full Disclosure (1996), Making Headlines is a paragon of modesty.

Unsurprisingly, Mitchell re-argues various controversies, starting with Manning Clark’s alleged Order of Lenin, from his time as editor of the Brisbane Courier Mail. Then there’s the invasion of Iraq, which Mitchell says he personally opposed: it was ”a tricky time to be a newspaper editor. Management ran very tight controls on all the paper’s coverage, but I wanted to make sure that, whatever our position in editorials, the news accounts were accurate and not politically skewed towards George W. Bush.”

This sits inside a general assertion that “avid readers of the Oz would accept that the paper’s news pages are straight down the line, even if the opinion page and editorials are dominated by an economically liberal point of view at odds with left-wing collectivism.”

“Straight down the line” is a jaw-dropping assertion few would agree with; and while the editorials might have been “economically liberal,” that was only part of it, sitting as they often did inside more comprehensive culture-war paraphernalia.

Naturally, there’s much in the book about the Australian’s reporting of climate change, but how do you defend the indefensible? By arguing that rival organisations are captured by progressive orthodoxy, contaminated by social media, estranged from ordinary Australians, and so on. Only the Australian was appropriately inquisitive and enquiring. Apparently, “[t]he latest polling in the northern hemisphere now suggests that more than half of all voters in the United States and Europe are sceptical about the science.” It would be useful to know the source of this surprising finding, but it’s not provided.

As with Mitchell’s columns in the Australian since his retirement, the most interesting parts of Making Headlines deal with media matters. The least interesting are suck-a-lemon-and-let-rip missives fired at “the left” and the progressives in Fairfax and the ABC, who are out of touch with “middle Australia” and captured by Labor and the Greens — you know how it goes.

In Man Bites Murdoch (2010), former News Corp editor Bruce Guthrie made quite a fuss about Rupert Murdoch’s comment that he valued loyalty in an employee above all else. It’s actually an unexceptional sentiment from a business leader, but when that business is the media it can be very tricky. Murdoch has long been accused of aligning his coverage with his business pursuits, and Mitchell’s book contains a no doubt carefully composed acknowledgement of “the possibility that Rupert Murdoch’s commercial interests might at times play out in the journalism of his products. Undoubtedly this is the case for all media proprietors.”

The book drips with great affection for two public figures: Murdoch and ex–prime minister John Howard. The former is understandable, given the long relationship under which Mitchell’s career flourished; the second, given Howard’s long stint in power, provides vindication of Mitchell’s political worldview. It’s the big ideological battles again: cue references to rival journalists underestimating that colossus’s connection with blue-collar workers, and so on.

Rudd, Julia Gillard and Tony Abbott aren’t fit to lick Howard’s boots, nor Bob Hawke’s or Paul Keating’s for that matter. Malcolm Turnbull just might be, but since the book was written that’s not turning out so well.

Some of the cognitive dissonance jars. Mitchell reckons politicians really must not stray from the aspirations of mainstream Australians — that was Rudd and Gillard’s mistake — yet the leaders he most admired were those prepared to take difficult, unpopular decisions.

It is vital that media players similarly remain in touch with the interests of ordinary people, yet many of the Australian’s battles — Gillian Triggs, the ABC, climate change — were surely a huge yawn to anyone outside the 5 per cent interested in politics, and to many inside.

There’s something-or-other about Pauline Hanson, and now Donald Trump, suggesting that lefties shouldn’t criticise them as it only adds to their appeal — or something — you know how it goes; it doesn’t really make sense. And, needless to say, Howard got it exactly right when he refused to condemn Hanson.

We know that a decade ago Mitchell was getting worked up about blogs; in the final years it was Twitter. Those editorials pummelling a particular segment of society must leave the bulk of the readership scratching their heads.

Still… There have always been idiosyncratic, biased newspapers and always will be. Mitchell’s accusations of progressive groupthink inside the ABC and Fairfax aren’t without foundation, and his diagnosis of the Age and Sydney Morning Herald business plans — so much clickbait fluff and stories based on tweets, driven by traffic numbers and shrinking advertising revenue, behind a highly porous paywall, “reverse published” the following day, all spiralling downwards — is persuasive.

You could make an argument that the Australian’s (and News Corp’s) top-down enforced right-wing skew provides a useful balance to the bottom-up left-wing tendencies of the others.

This online world of ours does contain no shortage of self-ordained media “experts” who, it seems from their writing, believe all media products should (a) reflect their own personal beliefs and (b) be provided free of charge.

Many who know these things say the Oz under Mitchell — the regular vindictiveness and ideological indulgences aside — was supremely well edited. I’m no media expert but to me it remains generally authoritative and hard-edged — and the home page is Kardashian-free. It does investigations, breaks stories and is what Murdoch most desires: influential in the press gallery and among the wider political class.

And he had the good sense to hire me.

In 2014 I was downsized; this time my entreaties to up high came to nought. Mitchell left the building in December 2015 and the following month my marching orders arrived.

That editor I’d had put in his place was now editor-in-chief. •