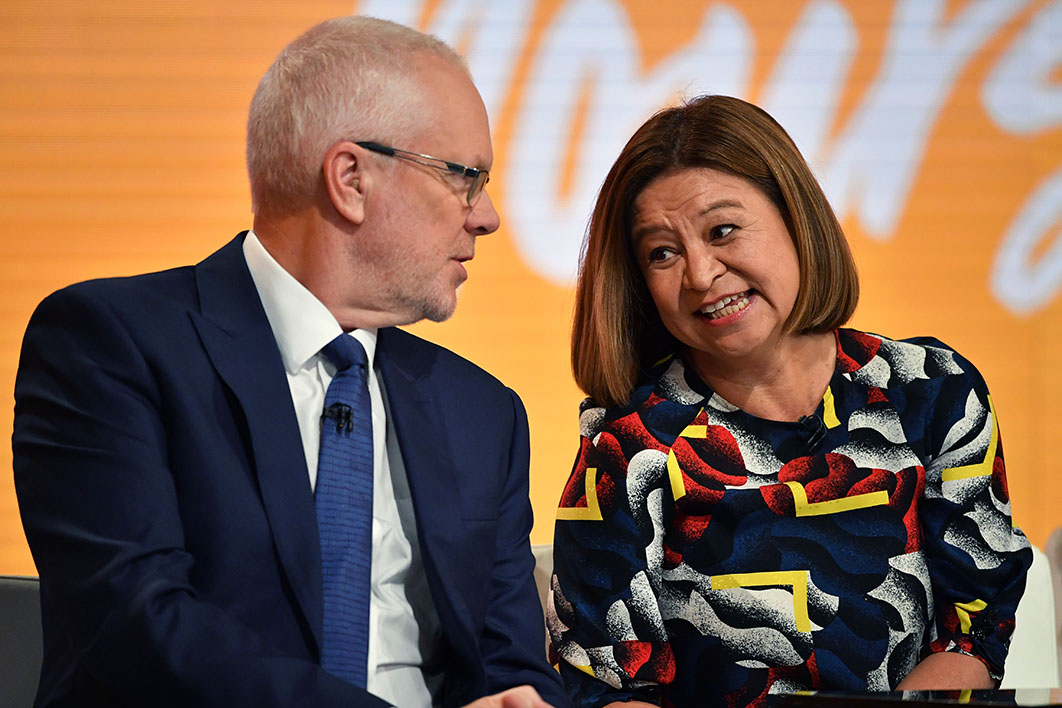 Michelle Guthrie will not be much mourned within the ABC. Poor at communicating with the public and dealing with government, she never managed to convince the staff that she understood and cared about public broadcasting.

But we would be very wrong to think that her departure is a good thing for Australia’s most important cultural institution. It leaves the ABC vulnerable and destabilised and highlights longer-term issues that seriously weaken the organisation. For this, Guthrie and the board share responsibility, as does the federal government.

That is the consequence of a poor recruiting decision and a chair and a board apparently incapable of constructively managing the result.

So what went wrong? Today’s announcement resulted from a combination of long-term issues and short-term problems.

For more than a year, serious tensions have existed between the ABC chair, Justin Milne, and Guthrie. These are the main reason for her departure.

Guthrie was perceived to be too hands-off and not sufficiently engaged in running the business. People speak, for example, of her frequent travel. Milne, for his part, was increasingly taking the front foot. He was the one talking about Project Jetstream, a big, costly digital database to carry all ABC content in anticipation of a day when conventional broadcasting disappeared.

I am told there is precious little on paper about exactly what Project Jetstream is — and even less in the way of a funding plan. Within the ABC there are still post-traumatic memories of the last big digital infrastructure project, the Web Content Management System, which held the organisation in stasis for years before delivering something that was already out of date. Guthrie was a Jetstream sceptic, doubting the organisation’s ability to persuade the government to fund it and preferring to focus the ABC’s tightened budget on content.

But the real issue, as the ABC is saying, was her “style,” which is code for the perception that Guthrie was not sufficiently present and not up to the job. Last week, her absence during much of an off-site management meeting at the Opera House was noted and remarked on. People observed that it was as though Milne was the managing director, dealing with the nitty-gritty, and Guthrie was the chair of the board. Relations between them were becoming increasingly difficult.

But Milne didn’t enjoy the unqualified liking or support of the rest of the board, either. In fact, some of them dislike him more than they are cool on Guthrie. In the last few months, though, that balance changed — which brings us to the short-term issue.

I am told that as the ABC annual report was being prepared over the last couple of months, two financial issues came to light. Neither was disastrous — the first was a cost overrun, the second has variously been described as a cash flow problem or an accounting issue — but they came as a surprise to the board and were seen as being embarrassing. Most of all, the board was angry at what it saw as Guthrie’s sanguine approach to the issue. It added to a view of her as insufficiently across the detail of the organisation.

Others remark that former chief financial officer David Pendleton — much resented when he was in the job because of his iron hold over the money — is now missed. Pendleton was one of the internal candidates for managing director but was perceived as not having the breadth necessary. He left after failing to get an interview.

While I am told the auditor-general and KPMG signed off on the accounts without demur, the perception was that there would be an embarrassing line item in the accounts. At the same time, the accounts will also reveal a big redundancy bill, brought to book from the beginning of Guthrie’s era.

Another part of the background is that Guthrie was not enjoying the job. Recruited in 2015 from managing Google’s Asia-Pacific operation, she was a surprise choice. From earliest days it was clear that she was not a strong communicator and at sea in the public and political elements of the job. At times she even denied that there was a political element.

She told people shortly after arrival that she would serve only one term and hoped for a longer-term future in Australia as a board director. The ABC was a way of getting back to her home country in the first place, and lifting her profile at the same time. On any analysis, that has gone badly wrong.

In a statement released today, Guthrie says she is considering her legal options. Any settlement will cost the organisation millions, but no cash will repair her profile.

I understand that negotiations were under way for the last few weeks at least with a view to easing her out. If those had gone well, there would have been an announcement of her voluntary departure, nice things said all round and tightly spun media management. But that all fell apart badly in the last twenty-four hours. Board members blame Guthrie for this. She dug her heels in, they say, and made it impossible to manage the exit. Guthrie herself did not return calls asking for comment. The situation became untenable and she was sacked.

Both sides are now lawyering up and reaching for the spin doctors. Guthrie has employed Andrew Butcher of Bespoke Approach, formerly personal spokesperson for Rupert Murdoch. Milne has reached for Andrew Maiden, former head of the pay television lobby and now “very much in the building,” according to my sources at ABC Ultimo headquarters.

What happens from here? David Anderson has been made acting managing director. That is no surprise, and the feeling from a few people is that the board should simply appoint him to the job. But I am told there will be a full appointment and the job will be advertised. He was the leading internal candidate when Guthrie was appointed — and, in a recruitment process that almost nobody defends, he and Guthrie were the only people interviewed by the whole board.

Anderson was formerly in charge of television, and in the restructure late last year got the title of “director entertainment and specialist,” which I said at the time could be described as the “everything else” division after news and current affairs and radio have been taken out. He was perceived as Guthrie’s most likely successor.

The board turnover since Guthrie was appointed has been near total, but there is a strong feeling among the incumbents that Anderson would have been a better pick. But the make-up of the board itself is part of the longer-term problem.

Labor’s communications minister, Stephen Conroy, set up an arm’s-length selection process to get rid of the worst of the political stacking. It worked — kind of. We now have a board made up of similar corporate types, none of whom, other than staff-elected director Jane Connors, have experience of and understanding of content.

Then the current communications minister, Mitch Fifield, failed to follow the new process for the board appointments announced in February 2017. He appointed Vanessa Guthrie, a Western Australian company director with a background in the mining industry, instead of the nomination panel’s recommendation.

So who missed out? Or rather, whom did we miss out on? I lodged a freedom-of-information request for that information close on a year ago, but it was refused by the government. It is currently on appeal with the federal information commissioner.

Meantime, when Justin Milne was appointed chair in 2017 one of his perceived strengths was his friendship with Malcolm Turnbull. Not only did that relationship fail to deliver visible benefits, but the calling card has relatively quickly expired.

Under former managing director Mark Scott, the ABC chair and the managing director would tour the Canberra corridors together, singing from the same song sheet. This did not happen at any time when Guthrie was in the job. •