Myanmar and the Rohingya: the case for quiet diplomacy

Without letting the government off the hook, we need to recognise the pressures that influence Myanmar’s policies in Rakhine State, writes Thomas Kean in Yangon 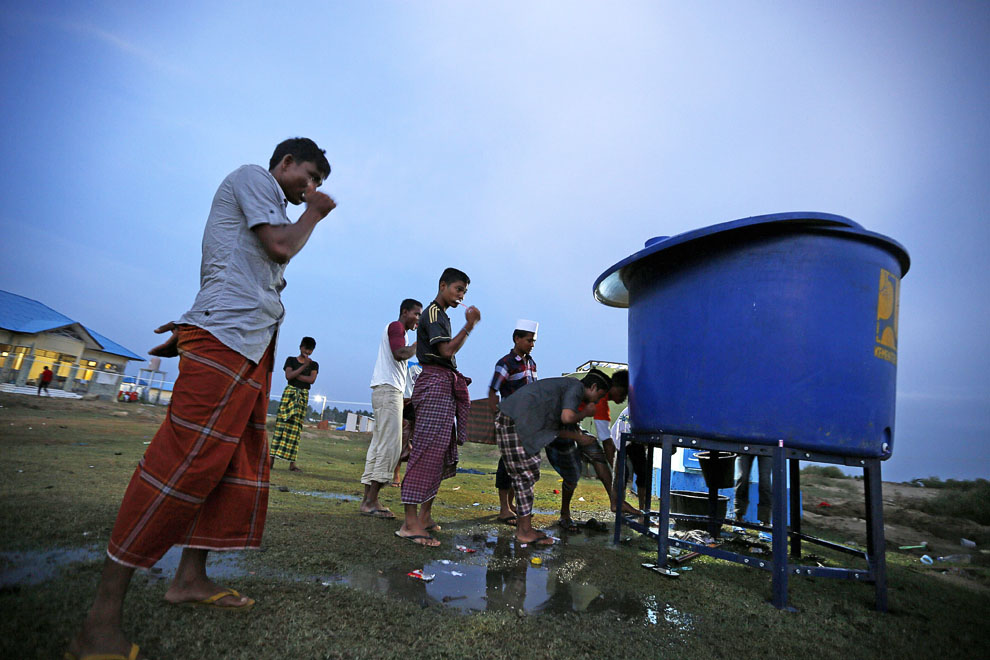 Rohingya gather for water at their temporary camp in Kuala Cangkoi, North Aceh, Indonesia, early on the morning of 2 June 2015. Hotli Simanjuntak/EPA

Rakhine State is a grim place. The second poorest state in one of the poorest countries in Southeast Asia, it is riven by ethnic and religious tensions that occasionally spill over into bloody conflict. The Muslims who mostly call themselves Rohingya have borne the brunt of this violence, and almost 140,000 still live in the temporary camps set up in 2012 following a series of clashes that left almost 200 dead. An estimated 700,000 are effectively stateless, and the government has recently revoked the temporary identity cards that once gave them residency rights.

Yet the majority Rakhine Buddhists – often cast as the villains – also have legitimate grievances, in their case against the ethnic Burmese, or Bamar, central government. They see themselves as the meat in the grinder between the numerical might of Bangladesh and the political, military and financial power of the Myanmar government far off in Naypyitaw. Perhaps a more apt metaphor would be ground chilli in a mortar and pestle: hot to touch, ready to explode. “We are now in danger of being overrun by these Bangladeshis,” Rakhine politician Zaw Aye Maung told a briefing for diplomats in Yangon on 4 June – a comment that provoked an angry response from Bangladesh’s ambassador.

The violence in Rakhine State has been the major blot on the reform copybook of Myanmar’s quasi-civilian government, which came to office in 2011 in a highly choreographed transition. Much to the government’s chagrin, the issue has been taken up energetically by much of the international community – governments, the United Nations, NGOs and the media – and that has drawn attention away from Myanmar’s recent achievements. Yet the fierce domestic opposition to any concessions to the Rohingya limits how the government believes it can respond. It too feels hemmed in.

In recent weeks the Rohingya plight has again been thrust into the spotlight. The world has watched as the lives of up to 10,000 people – a mixture of economic migrants, asylum seekers and trafficking victims from Bangladesh and Rakhine State – have hung in the balance, their vessels floating on the Andaman Sea and in the Bay of Bengal with little food or water and nowhere to berth. In what the International Organization for Migration called “maritime ping-pong,” stricken vessels were towed back out to sea by the navies of Thailand, Malaysia and Indonesia as they approached territorial waters.

Under growing international and domestic pressure, nations in the region finally abandoned their much-cherished principle of non-interference in the domestic affairs of their neighbours and began to act. On 20 May, Indonesia and Malaysia agreed to allow the boats to land as long as the international community helps repatriate or resettle their human cargo within a year. Then, on 29 May, representatives from seventeen countries, including Myanmar, met in Thailand to discuss irregular migration in the Indian Ocean. Much discussion again focused on the “root causes” of the migration – a thinly veiled reference to the discrimination against the Rohingya in Rakhine State.

There is a predictability about how the Myanmar government responds to the recurrent crises on its western flank. It enters siege mode, insisting that the issue is strictly domestic and should be settled by domestic laws. It declares the problem one of illegal immigration and poverty – legacies of colonial rule, geography and ethnic conflict – rather than a result of discrimination or a failure to enforce human rights. It resists attempts to characterise Rakhine State’s cycle of poverty and violence as anything more sinister. It responds indignantly when accusations of genocide or crimes against humanity are levelled.

The government also fiercely disputes the legitimacy of the Rohingya designation, an identity it believes was confected in the mid twentieth century to further the political aims of Rakhine’s Muslims. Instead, it insists on calling them Bengalis. And that is often where the debate starts and stops. The inability of the government and its critics to either ignore or temporarily overlook the question of ethnic designation results in a series of historical back-and-forths that never ends. No middle ground is found, and areas where progress can potentially be made go unexplored.

Some believe the government has confected the crisis in Rakhine State for political purposes, to distract the attention of its people – particularly the impoverished Rakhine – from issues of political and economic equality. According to this line of thinking, it is also a useful wedge against Nobel laureate and opposition leader Aung San Suu Kyi, who has been notably quiet on the issue. (Questioned by reporters in parliament on 19 May, she said it was the government’s responsibility to resolve the crisis.) Cue international condemnation of the human rights icon who has failed to stand up for human rights.

For similar reasons, though, the confected crisis theory seems implausible. The Rakhine conflict has drawn domestic and international attention away from the other challenges that Myanmar faces, making the reform effort that much harder. Ethnic Rakhine distaste for Naypyitaw has only increased, and is likely to be felt at the ballot box in a general election later this year. Tens of millions of dollars of state and donor funds are being spent supporting displaced families. The conditions in Rakhine State have also been a major factor in Washington’s decision to maintain some economic sanctions, complicating Myanmar’s program of economic liberalisation. The European Union continues to sponsor two annual resolutions on Myanmar’s human rights situation at the United Nations, largely for the same reason.

But while the current crisis hasn’t been manufactured in Naypyitaw, in other ways it reflects longer-term official policy. In the 1950s and 60s, the Burmese government quietly encouraged the development of Rohingya identity to counter a mujahedeen movement that had emerged after the second world war. In the early 1990s, though, it cancelled the identity documents held by many Rohingya and refused to replace them, instead doling out temporary registration cards, which became known as “white cards.” Formal applications from Rohingya for citizenship were ignored. It is this lack of citizenship that has fuelled many abuses in recent decades. Without identification, Rohingya can’t even travel to the next township without permission from a local government official. Economic opportunities are extremely limited.

Criticising the government is a national pastime in Myanmar, particularly in an era when social media gives people an instantaneous and public voice. But Naypyitaw’s position on this question is strongly supported. The Rohingya are neither accepted nor pitied, and public attitudes can be fierce. In my role editing the Myanmar Times, the country’s only privately owned English-language daily, this has been the thorniest issue to cover during Myanmar’s transition. Our paper’s support for human rights – including the right to self-identify – for all in Myanmar is deeply unpopular; we have been variously labelled “The Rohingya Times” and “The Bengali Times” for daring to use the word “Rohingya” and putting photos of Rohingya on our front page. Comments on our Facebook page – 652,000 “likes” and counting – are an intemperate testament to the depth of feeling the issue arouses.

At a time of relative political liberalisation – an incredibly free press, the right to protest, political representation for minorities – these forces and feelings have proven hard to control, limiting how the government feels it can respond. The few steps it has taken to address human rights issues in Rakhine State, including a flawed citizenship verification process for Rohingya, have prompted protests in Rakhine State and major cities elsewhere around the country. A proposal to maintain voting rights for white-card holders, most of whom are Rohingya, met with similarly fierce opposition.

Unable to resort to the tactics used during military rule to quell dissent, the government also lacks the ability to craft a convincing narrative to explain its actions and vision to domestic audiences, partly because it is unwilling to repudiate or even acknowledge past mistakes. In perhaps the most eloquent defence to date, senior government minister Soe Thane spoke recently of the need to “balance interests, pace change, and connect our aspirations to political realities on the ground” in order to ensure the reforms do not fail. “We ask though that our friends outside add not fuel but bring water to the fires that we have to put out as we open up our country and our society after so many years of authoritarian rule,” he wrote in Nikkei Asian Review.

Western governments are aware of these pressures and have made few public statements berating Myanmar, a task left instead to NGOs. The UN country team has been almost totally silent, with criticism instead emanating from Bangkok, Geneva and New York. At the same time, quiet but intense talks have been launched in an effort to push Myanmar to address those root causes. The importance of the intervention of Southeast Asian nations – ASEAN, previously unwilling to touch the issue, has been a bulwark against Western criticism – cannot be overstated. The regional nature of the boat crisis has prompted a slight recalibration of thinking in Naypyitaw, which senses that failure to engage will leave it on the outer. Publicly it remains belligerent, but there is an understanding that the situation in Rakhine State needs to change for the better, for all.

The question now is how best to encourage that change. Some steps that could be taken immediately – the granting of full citizenship to the Rohingya, for example, or their recognition as an official ethnic group – are clearly off the table. Compromises and quiet diplomacy are the order of the day, but the Myanmar government cannot be allowed to use domestic politics as an excuse for inaction. Negotiating this fine balance will require tact and coordination from the international community, and strength from Myanmar’s collective political leadership. Even if that occurs, change will not come fast enough for some. It is likely to be decades, possibly generations, before the deep-seated resentment and fear driving the persecution of the Rohingya can be fully mitigated. •

Thomas Kean is editor of the Myanmar Times.