New Zealand as a refuge: half-myths and partial realities 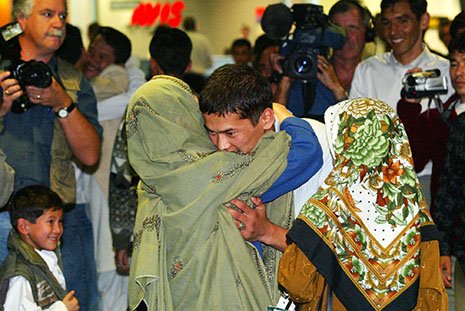 An unidentified refugee who travelled to Australia on the Tampa and was sent to Nauru is reunited with members of his family at Auckland international airport in February 2004. Ollie Dale/AAP Image

A TAXI driver I know fled from a war-torn country not so long ago. If his passengers ask where he comes from, he often responds by mentioning the Wellington suburb where he now lives. This usually raises a smile, he tells me, and it sometimes saves him from having to explain what is still happening in his homeland. He doesn’t mind talking about it on some levels, but it can be painful to recall past events and be reminded of a family involuntarily scattered around the world.

Many migrants have mixed feelings about departures and arrivals. I am no exception, having come to New Zealand from England in 1974. However settled you might feel, there is usually a sense of belonging to more than one place, and also a feeling of loss about at least some of the people you have left behind – although, if we’re honest, we might concede it’s also good to be far away from some situations and persons. So it can be hard to disentangle motives for leaving and to say for sure whether movement was freely chosen.

Does New Zealand deserve its reputation for being among the most welcoming of hosts for that most contested group of migrants, refugees and asylum seekers? Refuge New Zealand looks at the historical record and current policies and provides a qualified answer. Yes, in many respects, but it depends when, where and with whom you are making the assessment.

Ann Beaglehole’s well-crafted historical analysis shows that defining refugee status has always been a politically loaded process, and that we need to be alert to the value-laden assumptions that shape official and everyday discourse about migration, especially in settler states like New Zealand and Australia. Her background – forced to leave Hungary with her Jewish parents in the 1950s; later the author of books on people fleeing Nazism who ended up in the Pacific – makes her doubly qualified to provide rigorous answers to delicate questions.

At the outset of Refuge New Zealand, which is primarily aimed at a non-specialist readership, Beaglehole carefully outlines how the changing terms used to categorise arrivals have their own bureaucratic and popular lexical flavour. Although fugitives from misfortune are ever-present figures in human history, the administrative designation of the “refugee” and the “asylum seeker” are of very recent origin. Likewise, despite perennial concerns about territorial proprietorship and unwelcome strangers, the vigilant control of national borders with passports and visas is also relatively new.

Does this mean that we could see the plight of the mid-nineteenth-century victims of the New Zealand wars, which pitted government forces against the Māori, in the same light as contemporary victims of conflict? Beaglehole’s venture into this contentious area, influenced by her experience working on the Waitangi Tribunal, will undoubtedly ruffle some readers’ feathers. And I remain sceptical about the parallels between being supplanted in your own country and being compelled to flee across international borders. Yet by raising this comparative prospect, and being careful to note the de jure and socio-political differences that distinguish forced indigenous and immigrant uprooting, she makes a refreshing attempt to encourage us to reflect imaginatively on subjects that are often compartmentalised.

Imperial ventures, wars and revolutions relocated countless numbers of people prior to the second world war, but the millions of people displaced by Fascism spurred concerted attempts by the United Nations to establish protocols about humane ways to provide sanctuary for those fleeing racial, ethnic, religious, national and political persecution. Much of this book traces the relatively small and closely monitored arrival of diverse sets of people into New Zealand before and after the 1951 conventions were set in place. Jewish, Chinese, Polish and other European “displaced persons,” including women and children, arrived in the late 1930s and 1940s, and they were joined, in minor waves, by other Eastern Europeans and Southeast Asians escaping communist regimes in subsequent decades.

Even more recently, increasingly varied groups of refugees have come to New Zealand, mainly through official quotas from North Africa, the Middle East, Latin America and other Asian origins. Their reception on local streets therefore followed the broader historical pathways of a familiar antipodean immigration history, which moved, gradually and grudgingly, away from racial and ethnic exclusivity towards greater acceptance of more distant peoples – to the point that many Kiwis now recognise the merits of ethnic pluralism, although within limits.

National policies of refugee determination and resettlement are the book’s prime focus, so those looking for a more in-depth appraisal of New Zealand’s role in international refugee support agencies and overseas aid programs may be disappointed (although Beaglehole is consistently mindful of the global geopolitical conditions that continually influence political decisions). Often piecemeal, ad hoc and opportune, national policies were made by personalities living in very different but in many ways strikingly analogous worlds. At first glance, the convictions of William Massey, the Liberal prime minister whose term of office bracketed the first world war, sharply contrast with the post-1960s views of Norman Kirk and Helen Clark, with the former’s protection of British dominion values superseded decades later by his successors’ pursuit of an increasingly independent and inclusive Pacific nation. But all of these figures faced similar problems in balancing existing sentiments about the parameters and recipients of sympathy and welfare, ever-present economic expediency, and enduring fears and enmities relating to outsiders.

Beaglehole generally manages to steer an even-handed course through this minefield, so students of migration will welcome her balanced and meticulous coverage of the copious archival sources she presents. Scholars and more general readers will also appreciate how the fine-grained detail is enlivened by often-poignant individual testimonies, ethnic group vignettes and splendid personal and official photos. Well-chosen cartoons also neatly evoke the often-inflamed debates and (mis)perceptions on both sides of the Tasman, including, of course, the infamous Tampa incident in the weeks before the 2001 Australian election.

Not surprisingly, Beaglehole has little sympathy with the rarely resisted temptation among politicians and media to score jingoistic points or engage in moral panicking. Clark is the exception whom Beaglehole sees as having a cool and largely compassionate head amid the international machinations surrounding John Howard’s perilously contrived Pacific Solution – a stance, Beaglehole is careful to note, not shared by all her parliamentary colleagues, especially across the benches, and one that met with very mixed public reactions outside the House.

Clichés aside, size and distance are still inescapable measures of New Zealand’s place in the world. Immigration Service figures reveal approximately 1500 designated-quota refugees and fewer than 250 asylum seekers are currently residing in the country. Do these statistics support images of conspicuous generosity or miserly hospitality in a population not yet five million? It depends, of course, on whether you want to recognise the dark irony of compiling per capita rankings of the alleviation of human suffering. Relative isolation still means few New Zealanders harbour real fears of being “invaded” by “irregular” visitors or having to contemplate naval patrols and offshore processing. And however irksome border surveillance strategies have become post 9/11, recent “mass arrival legislation,” designed to keep New Zealand in step with North/South containment, has met with little opposition. Meanwhile, “fitting in” – a little like “invisibly mending” torn clothes, to use the author’s apt metaphor – is still widely expected from recent settlers. Nevertheless, the intimacies of NZ society, even in sprawling, polyglot Auckland, continue to be a key redeeming feature for easing refugees into new lives.

New Zealand’s refugee settlement policies and practices have always been heavily reliant on voluntary associations and individual sponsors, aided by meagre state funding and sparse specialist services. Religious, welfare and ethnic organisations, working alongside local voluntary helpers, are still the most distinctive feature of local support. Beaglehole relates how their blend of community values, never uncontested, led to landmark acceptances of refugee categories that many other receiving states were unwilling to take. Maybe numbers were small, but over the years New Zealand became known for its willingness to receive women and children at risk, those with medical conditions like HIV/AIDS, and emergency protection cases. Often, however, local volunteers find it difficult to deal with people with severe trauma, and informal conventions of finding houses, employment, and health services are frequently stretched. In these circumstances, sponsorship may veer close to charity or unintentionally trap refugees in pernicious webs of “beneficiary” censure, and the book deftly avoids over-romanticising the situation.

One of Beaglehole’s most telling observations is that New Zealand’s progressive reputation within the UN refugee system has become a self-fulfilling prophecy, transforming half-myths into partial realities. Even Kiwis with major misgivings about asylum seekers find it difficult to combat the well-worn but often well-deserved perceptions of a diminutive nation punching above its weight in international arenas. In truth, much like all other Western countries, utilitarian motives and pragmatic practices – picking the economic winners out of those on offer or being forced to face geopolitical contingencies – frequently influence local refugee decisions. Even so, altruism has often outweighed these factors.

A fine record is therefore, on balance, fair comment. But Refuge New Zealand ends with another intriguing question. If the United Nations ever decides that the victims of environmental disaster can also be designated refugees, how will New Zealanders respond to this challenge, given the proximity of even smaller vulnerable Pacific neighbours? •

David Pearson is an Adjunct Associate Professor at Victoria University of Wellington.