No white Christmas for those with the budget blues

The government still won’t acknowledge why the deficit isn’t going away, but it’s not too late to take some simple steps 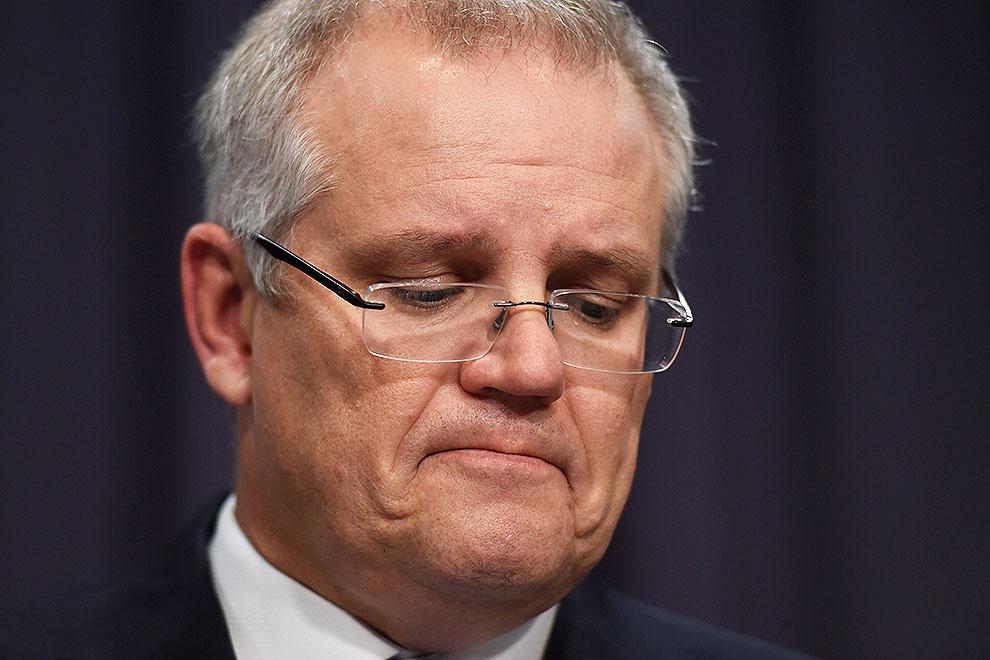 There was a bit of pride and a bit of resignation in the way treasurer Scott Morrison and finance minister Mathias Cormann reported yet another $10.4 billion blowout in the budget deficit forecast for the next four years, as revealed in yesterday’s Mid-Year Economic and Fiscal Outlook, or MYEFO.

They felt that they had done a workmanlike job, and, within the constraints this government has imposed on itself – “we don’t do tax rises, even when the budget needs to be fixed” – they had. Cormann pointed out that they had funded all their election commitments while making policy decisions that, in net terms, are expected to reduce the four-year deficit by $2.5 billion without causing serious political storms.

How they did that is an interesting point we’ll come back to. And there are many other things of interest here, not least the Turnbull government’s extraordinary discrimination against Melbourne, epicentre of Australia’s population growth, in allocating transport funding. We’ll come back to that too.

It staggers me that Turnbull, Morrison and Cormann, who seem reasonable people, could think it a good idea to reduce our efforts to help long-term jobless people find work.

But the big story in this MYEFO is that the deficit remains stubbornly unbeaten. Despite all that workmanship, the government’s estimates of future debt and deficits have blown out yet again, and on a scale big enough to make an objective observer wonder when Australia will ever get back into surplus.

For the fifth time in a row, the government has had to front up and admit that revenues are falling well short of its forecasts. The only time since taking office that it hasn’t done so was in the 2014 budget, when, with hindsight, it was seriously deluded about the size of the problem – and how to tackle it.

By contrast, despite the Senate’s blocking some spending cuts, spending this year is now forecast to be $3 billion less than predicted in 2014. The government and its media supporters are only deluding themselves in proclaiming that this is a problem of too much spending. It is primarily a problem of having too little revenue.

If you don’t believe me, compare today’s numbers with the way the Howard government did things. In its eight years in office after introducing the GST, its revenues averaged 25.4 per cent of the nation’s gross domestic product; this year they are expected to be just 23.3 per cent. Spending averaged 24.2 per cent of GDP under Howard; it’s 25.2 per cent now. The revenue gap is twice as large as the spending gap.

The International Monetary Fund and the OECD have urged the government to look at tax rises, for policy reasons as well as deficit reduction. The government refuses to do so, for ideological reasons. The bottom line is that there are many ways to close the deficit. In ruling out half of them, the government and its media allies raise questions about how seriously they are committed to doing the job.

It is not a trivial issue. Yes, Australia’s net debt is the seventh-lowest in the Western world, but it will stay that way only if, at the very least, we keep the deficit close to balance – and with the deficit forecast to be $36.5 billion, roughly the same as two years ago, we are far from that.

For every $1 it earns, the government is spending $1.08 – and that’s eight years after the financial crisis. Even in crisis-battered Europe, only five governments are running bigger deficits than Australia – France, Britain, Spain, Greece and Portugal – and in all but Britain, that’s mostly due to the unavoidable cost of servicing their massive debts.

The rating agencies have waved Australia through this time. Frankly, credit ratings are overrated – markets accept very little yield on US bonds, even though Standard & Poor’s now rates them only AA – and you can’t imagine any Australian government defaulting on debt payments. Still, if the agencies make such fine distinctions, it is hard to see how they can continue to rate Australia in the select few with AAA ratings when it is running one of the loosest fiscal policies in the Western world.

Running such large deficits so long after any crisis has passed isn’t normal. This is policy failure, for which both Labor and Coalition governments are to blame.

Don’t blame the Senate. It is elected from a much wider base of Australian opinion, and its job is to review government legislation and reject that which it judges unacceptable. On the government’s own figures, even if the Senate were to pass all the budget cuts it has rejected, that would shave just $3 billion off the $36.5 billion deficit. The Senate is not the problem, it is the scapegoat.

The latest blowout reflects the weakness in wages and job growth, on which we reported last month. Over the four years to mid 2020, $31 billion has been wiped off forecast tax revenue, mainly because fewer people are expected to have jobs, and those jobs on average are expected to earn less than previously forecast.

Even the surge in iron ore and coal prices – in the case of metallurgical coal, to astronomical record highs – has been more than offset by the decline in expected profits outside the mining sector. I hope Treasury knows more than I do, because its forecast of an almost $10 billion jump in company tax revenue next year looks decidedly optimistic.

The economy is not doing that badly. It is slowed down by excessive household and government debt, yet it’s within cooee of the average per capita growth we’ve had since the crisis. But it’s not doing well enough to close a budget deficit of this size by itself. And that’s what the government is asking it to do, with a bit of help from every treasurer’s friend, bracket creep.

Morrison at least now admits that revenue (he calls it “earnings”) is a problem. But he insists that the revenue gap will close naturally by growth, so the government doesn’t have to do anything, except to make sure that it includes enough spending cuts to offset its new spending, as it did this time.

But it’s been telling us that since the 2014 budget, and every single budget and MYEFO since then has reduced its forecast tax take. After that’s happened five times in a row, why should we – or the ratings agencies – think they’ve got it right this time?

Where did they make the savings to pay for all the new spending they promised during the campaign, much of it in country seats under threat from Labor or independents? Four areas stand out:

This is serious. As I’ve reported earlier, for all the talk about infrastructure, actual investment in transport infrastructure by and for governments, federal and state, has slumped from 1.20 per cent of GDP in 2010–11 to 0.89 per cent in 2015–16. This year the quantity is up, but the quality is down. On the running tally kept by the infrastructure department, of 104 community infrastructure projects the Coalition promised during the campaign, only six were in Labor electorates. Clearly these projects were chosen for political reasons, but they were funded with money that had been earmarked for priority projects: “land transport projects that will deliver the highest benefits to the nation.”

MYEFO cuts $850 billion from this year’s budget for infrastructure programs run jointly with the states. Once again, Victoria is the Turnbull government’s target enemy: it proposes to spend just $621 million on infrastructure works in the state, while spending $3.1 billion in New South Wales, $1.9 billion in Queensland, and so on.

At a time when Melbourne is housing almost a third of Australia’s population growth – last week’s figures imply that more than 100,000 of the nation’s 337,821 population increase in the year to June settled there – the Turnbull government is doing little to help solve the city’s transport crisis. Victoria as a whole is slated to receive only $2 billion of the $26.4 billion allocated for the next four years, compared to $8 billion for NSW and $7.6 billion for Queensland. The state with 36 per cent of the nation’s population growth would get only 7.7 per cent of funding for new transport projects.

Turnbull and Victorian premier Daniel Andrews need to repair their personal relationship over the Christmas/New Year break. It is in no one’s interests for them to be constantly seeking to score off each other rather than working together. Victorian voters might well take it out on both of them.

One more suggestion. The government’s plan to cut company tax by more than $10 billion a year is clearly unaffordable while the budget remains broke. Why don’t Scott Morrison and Chris Bowen also have a drink together over the Christmas holidays, and shake hands on a more targeted way to get the new investment Morrison is aiming for? Using accelerated depreciation allowances or some similar tax break would give businesses an incentive to make new investments without doing the budget as much damage as an across-the-board cut in company tax. •