Not the National Press Club

Fists haven’t been the only things flying in Coburg recently. Kerry Ryan watches eight election candidates go through their paces 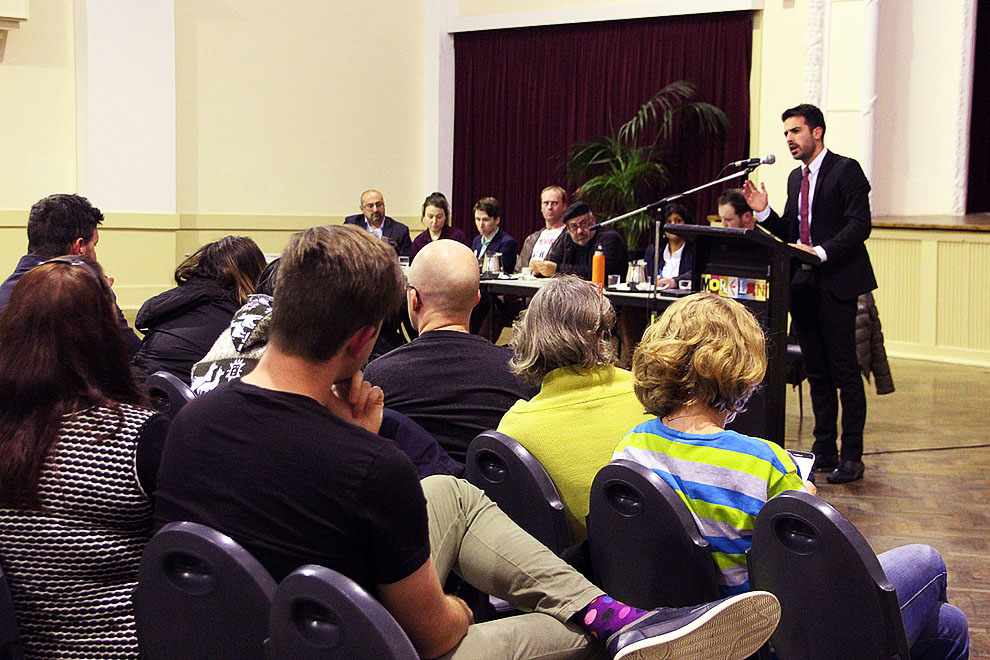 Like most people, I was doing something else while Malcolm Turnbull and Bill Shorten were doing their impression of two trees falling in a far-off forest during the leader’s debate at the National Press Club. I can’t quite remember what, but it was probably very important. Thanks to catch-up television I managed to check out the debate the next day. Well, some of it. The first twelve or so minutes, anyway. The important thing to note is that I tried.

I didn’t have to try too hard to stay interested the following evening at the Coburg Town Hall. Climate Action Moreland had organised a forum on climate change and sustainability for candidates contesting the federal seat of Wills, which takes in the City of Moreland. While it was never likely to be as punchy as the anti- and pro-racism rallies held a couple of days before in the same locale, it wasn’t exactly convivial. Politics gets a lot more willing and absorbing away from the hot lights of Canberra. All politics is local, so they say.

There were eight candidates on the bill. Peter Khalil from the Labor Party and Samantha Ratnam from the Greens, the only two in with a real show of taking the seat, were the headliners. The Sex Party showed up, and so too the Animal Justice Party, the Drug Law Reform Party, the Socialist Equality Party, Socialist Alliance, and Francesco Timpano, serial candidate of the north and lone independent on the night.

The Liberal candidate, Kevin Hong, sent an apology. I’d never heard of Kevin so I took a minute to Google. In his blurb on the Libs’ homepage he uses the word “fight” six times in the space of eight sentences. Given the weekend we’d just had in Coburg, perhaps he’d be handy around the place. Not only was Kevin keen to fight for the people of Wills, he would, like every other prospective MP in the world, do it “tirelessly”; just not tonight, I suppose.

As the candidates were taking their seats, I grabbed a moment to flick through the propaganda on hand. A largish gentleman of the left corralled me and asked for my thoughts on climate change. Caught a little off guard, I didn’t get much out before he filled the silence: “In my opinion we need a total reorganisation of society to deal with this issue.” My first thought was that such a thing would take some time. I was hoping to get home in time for Q&A – Nick Xenophon was on.

Labor’s Kelvin Thomson, the retiring member for Wills, kicked off proceedings with a thank you to the electorate for his past twenty years at the helm. He then announced that a childhood interest in birds, plants and animals had sparked the lifelong commitment to the environment he’d carried into the public arena. All of a sudden, I was pining for the National Press Club and Malcolm vs Bill. Mercifully, though, and to his credit, Thomson didn’t elaborate.

One by one the candidates took to the lectern with five minutes each to spruik their credentials to the 140 or so residents of Wills before them. Zane Alcorn from the Socialist Alliance took an early swing at Labor’s Khalil, director of national security policy for the Coalition Provisional Authority in Iraq from 2003 to 2004, for his role in the “illegal Iraq war.”

Ash Blackwell from the Drug Law Reform Party kept it short, and mostly on drugs. The Sex Party’s Tristram Chellew did an admirable job of trying to link his party’s civil liberties platform with the environment by calling for an end to fracking. At least I think he said fracking. Will Fulgenzi from the Socialist Equality Party was a with-us-or-against-us Trot for whom nothing short of the end of capitalism would even begin to deal with the problems at hand. I’m pretty sure Will wasn’t heading home to watch Q&A. Camille Sydow from the Animal Justice Party introduced me to a term I’d never heard before: “non-human animals.” If you’re reading this, you probably aren’t one of those.

Aside from a few spot fires, and the occasional burst of mostly lone applause, the event didn’t really get rolling until question time. Most came for Ratnam and Khalil. Ratnam, the mayor of Moreland, was among friends and didn’t take any major blows, but nor did she land any. It was different for Khalil, particularly when a young woman took the microphone and said, “My question is for the war criminal, Peter Khalil.” You don’t get that at the National Press Club. I didn’t catch the rest of her question. It got lost in all the whoopin’ and a-hollerin’.

To be fair, Khalil handled it pretty well. For what was the third time at least, he outlined his role in Iraq and declared himself anti-war. Well, you would, wouldn’t you?

For an event organised by Climate Action Moreland, in the end there was very little Moreland. Phil Cleary, independent member for Wills from 1992 to 1996 and the only non-Labor politician to hold the seat since it was created in 1949, was the first to protest from the floor, delivering a broadside to the lot of them for banging on about national and international issues at the expense of the local.

In that respect, we, the people of Wills, didn’t really learn anything, but at least we stayed awake. •