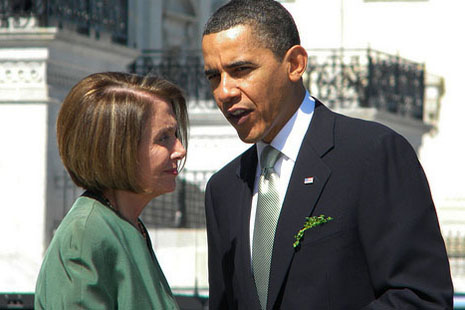 THIS WEEK Barack Obama edged towards his declared goal of abolishing nuclear weapons by signing a new Strategic Arms Reduction Treaty, or START, cutting US and Russian nuclear forces. But don’t open the champagne yet. The deal was tougher to negotiate than expected, took months longer than Obama’s original deadline, and only goes a small way to achieving his ambition. And although it was a hard slog, negotiating the treaty was by far the easiest part of the president’s challenge. Enormously more difficult steps will need to be taken before we get to abolition.

At the end of the cold war the United States and the Soviet Union each had over 20,000 nuclear warheads. In subsequent years both countries agreed to reduce their “deployed strategic nuclear warheads” to 2200 each. This was real progress, but not quite as impressive as it sounds. The agreement failed to count thousands of “non-deployed” and “non-strategic” warheads, most of which are in storage. Although these labels make the weapons seem less significant, many are ten times more destructive than the Hiroshima bomb and together they could flatten every city on the planet.

The new START calls for the number of deployed strategic warheads to be reduced to 1550 each. But it still fails to get to grips with the other bombs. So, in practice, each side could still decide to keep, say, 4000 nuclear warheads and yet remain within the terms of the treaty. So, twenty years after the end of the cold war the new START may be a move in the right direction, but it only changes things marginally. It is not a fundamental breakthrough.

IF START really is part of a process leading to complete nuclear disarmament, what further steps are required to get to the goal? Many reports on the topic have been produced over the years by individual experts and a range of groups and panels from the United States, Sweden and Australia; there is even a draft of a convention banning nuclear weapons. We are not short of ideas, and there is no mystery about the basic conceptual, technical and political measures we must adopt to reach zero. The deficiency lies in the lack of political will and involves a set of so-far intractable political challenges.

The first step on the long road to abolition is to get START ratified. The spotlight here will be on Congress because the US constitution requires all treaties to be approved by two-thirds of the Senate. This means Obama cannot push the issue on party lines, and needs to bring a large body of Republicans with him. A complication here is that the Senate has often shown a preference for setting the bar very high on treaty verification, sometimes higher even than the US military; moreover, many senators are wary of arms control in general and could easily slow down matters, perhaps indefinitely. As a sign that he needs and wants to accommodate conservatives, Obama’s recent budget provided for an increase in spending on the nuclear weapons establishment. He did this because he has to prove to the American mainstream that downsizing the nuclear arsenal is not synonymous with neglecting it. This makes him a target for the left, and provides cynics with ammunition, but it seems the only way he can move his agenda through the US political system.

The second step is to sign a deal that covers the thousands of so-far uncounted US and Russian warheads. This might be tricky. The non-strategic (or “tactical”) weapons pose a notoriously difficult verification challenge: they are less tied to large fixed military bases and are easier to move around and hide. On top of that, there are uncertainties over basic accounting; in particular, it is difficult to get a precise figure for the total number of non-strategic warheads held by Moscow. This overlaps with the question of how to define a warhead, especially if its different components are stored separately or are going through maintenance. So, even if a treaty is negotiated to deal with these weapons, the US Senate may deem it impossible to verify and so refuse ratification.

The third and fourth steps are the long-awaited ratification of the nuclear test ban and a treaty on a verifiable halt to the production of weapons-grade uranium and plutonium. Both measures were opposed by the Bush administration, but Obama has reversed this foolishness and has now pointed US policy in the right direction. He will still need to get the Senate on board, though, and it should not be forgotten that the senators recklessly shot down the Comprehensive Nuclear Test Ban Treaty in the 1990s.

The fifth step is to provide first aid to the battered Non-Proliferation Treaty. The NPT remains the best multilateral platform available for moving forward, and Obama will try hard at an international summit later this year to breathe new life into it. His presentational skills will be very useful, but after years of US hypocrisy sharp-eyed observers will be looking for more than an inspirational speech. Obama knows this and will be hoping that START and the just-released Nuclear Posture Review will demonstrate he is acting in good faith.

The sixth step is to get deeper backing for the idea of abolition. Although the idea has gathered increased support over recent years, there are two overlapping groups of hold-outs. These include those who consider nuclear disarmament impossible because they don’t think the political conditions necessary for the project will ever emerge. These people can’t foresee a day when trust will be universal, which means, they say, that deterrence will always be deemed necessary. Then there are those who think disarmament is undesirable because it would destroy deterrence, turning the clock back to before 1945 and increasing the risk of conventional wars between great powers. So, while many strategic experts and politicians give lip service to the idea of abolition, some also have serious reservations.

This is true even within Obama’s administration. The president had trouble getting his own side to endorse his idea that nuclear weapons should have a radically more restricted role. Leaks in relation to the Nuclear Posture Review showed the Pentagon was divided over whether deterring others from using nuclear weapons ought to be the “sole” or “primary” role of US nuclear weapons (the word primary being code for the notion there could be other reasons for having the bombs, such as first use). In the end Obama’s review floated the idea that deterrence of nuclear attack could eventually be the “sole” role for US nuclear forces but then declined to endorse it as his policy. In practical terms this means Obama has failed to fundamentally change American nuclear strategy. After all, deterring a nuclear attack on the United States has always been the primary role of US nuclear forces, even under bellicose presidents, such as Ronald Reagan in the early 1980s and George W. Bush more recently. Of course, this didn’t stop Washington’s employing nuclear threats for other, “secondary,” reasons, such as implicitly threatening Iran and North Korea with the prospect of a first strike. Indeed, a careful reading of the Nuclear Posture Review shows that Obama continues to reserve the option to attack these and similar countries with nuclear bombs, even if they have not used their own nuclear capabilities.

Yet universal commitment to nuclear no-first-use would seem to be a precondition for fundamental progress towards abolition. The reason some US analysts resist such a move is simple: they see American nuclear weapons as having a continuing place in the management of world order. Here conservatives can take comfort from Obama’s realisation that he will never be in a position to move to abolition. Indeed, although the Nuclear Posture Review reiterates Obama’s declared commitment to work toward a world without the bomb, it also states a need to maintain the nation’s nuclear infrastructure for “several decades or more.” So the next generation will see a less bloated, but still enormous and deadly US nuclear force structure. Moreover, embedded in the logic of the review is the claim that further restrictions on the role of US nuclear weapons will have to await improvements in America’s already massive, and massively expensive, conventional forces.

But back to the steps that would need to be taken if abolition were to be achieved. Step seven would be the broadening out of arms control to include the other official members of the nuclear club: China, France and Britain. Traditionally, each of these countries has tried hard to keep out of formal limits on nuclear arms, with each insisting they already have only the minimal forces needed for their national security (an argument that is itself an incitement to others to proliferate).

Assuming that Beijing, Paris and London can be brought into the formal arms reduction process, we could move to step eight. This is the requirement to bring in the “outsiders” – those nuclear armed states that refuse to sign the Non-Proliferation Treaty: Israel, India, and Pakistan (and North Korea, which first signed, then unsigned). But each of these states has nuclear weapons for its own reasons, and each believes that security factors make nuclear weapons essential. It’s difficult to see how they can be persuaded to change their minds without resolving deep-seated problems in the Middle East and South Asia. Policies aimed at getting rid of nuclear weapons have to face up to the reasons why these weapons were developed in the first place.

Lastly, at step nine, we will need an effective mechanism for managing the final move to zero nuclear weapons. This is likely to be the hardest part. Going from, say, 8000 to 800 warheads globally will be very hard but relatively easy compared to going from 800 to zero. The mechanism for managing the move will need to (a) oversee dismantlement of the last remaining weapons; (b) verify, for the rest of time, that weapons are not being rebuilt; and (c) establish enforcement measures, to punish cheaters and reverse any proliferation that occurs. This mechanism might be built on the United Nations and International Atomic Energy Agency, but it would need to be capable of taking more robust action than those institutions have managed so far. States as diverse as North Korea, Iran, Israel, the United States and France would have to be kept in line with far more than stern UN resolutions.

This mechanism would also have to tackle the strategic challenge posed by expanding civil nuclear energy programs around the world. The problems illustrated by Iran’s bloody-minded policy, which blurs civil and military nuclear technologies, are just a taste of the difficulties involved in dealing with such “virtual” proliferation.

TOGETHER, these nine steps would constitute a revolution in global politics. No wonder Obama acknowledges abolition might not happen in his lifetime. Meanwhile, he should keep taking incremental steps, like START, which reduce the dangers associated with the weapons and make it easier for his successors to advance the longer-term goal of nuclear disarmament.

This goal might look like an unrealisable dream, but it is also a moral imperative. Notwithstanding the publicity given to global warming, these weapons represent the greatest threat to humanity there is. •

Andy Butfoy is a senior lecturer in international relations at Monash University.

Teaching to the test

Once an advocate of testing and accountability in schools, Diane Ravitch has reassessed the evidence, writes Paul Bamford