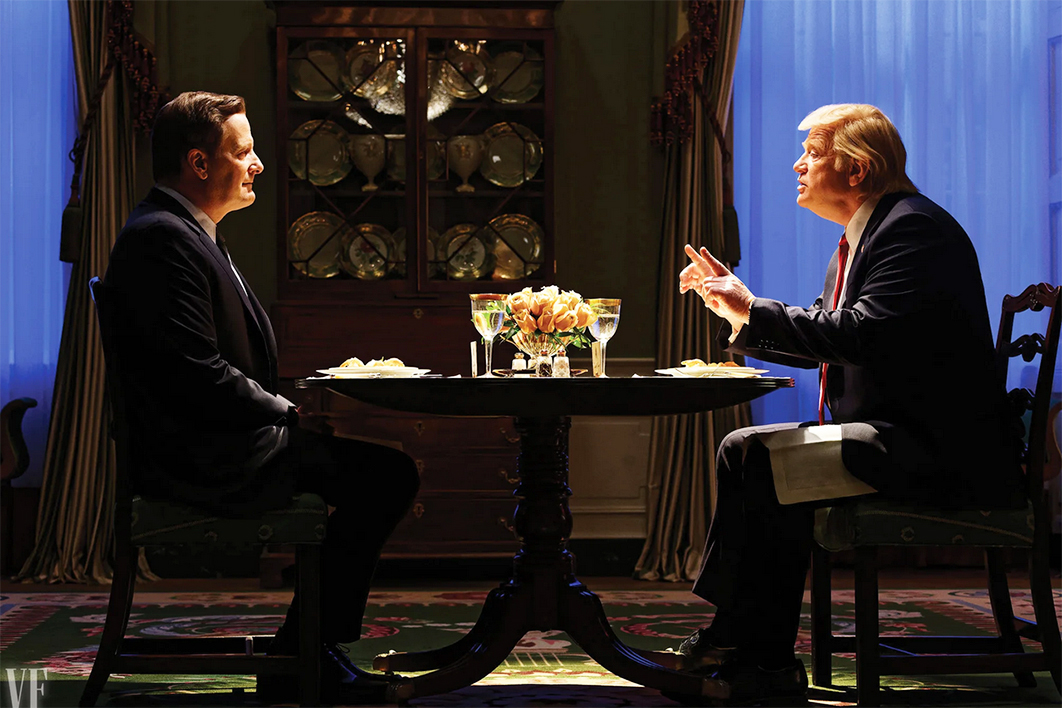 “There’s no question. If you air this before the election it is white-hot.” So said Billy Ray, writer/director of The Comey Rule in an interview with the Washington Post last month. Fears — or hopes — that his dramatisation of former FBI director James Comey’s 2018 memoir, A Higher Loyalty: Truth, Lies, and Leadership, might be a game changer in 2020 have created a secondary drama around the release date.

The two-part miniseries was contracted on the basis of an agreed airtime in August, but the production company told Ray earlier this year that a decision had been made to move it to November. In protest, he made public a letter to the cast in which he claimed that “our movie, released in August of an election year, would have been very big news. Can you imagine the billboards? Comey Vs. Trump! A cast loaded with Emmy winners!”

Trenchant Trump critic Jeff Daniels, who plays Comey, lent his weight to the protest, and the decision was reversed. But this October has been rolling out a very different set of surprises from those in which Comey was involved in 2016, when his announcement of a reopened probe into Hillary Clinton’s emails just eleven days before the election may have done terminal damage to her campaign.

As Ray’s comments suggest, the purpose of the dramatisation is at odds with the driving principles of its central figure. In his book, in interviews and in testimony to Congress, Comey is insistent that his responsibility as head of the FBI was to ensure that its activities were free of political motives. “The notion that we had an impact on the election makes me sick to my stomach,” he said in 2018, in response to a question from Leigh Sales about the critical timing of the reopened investigation.

There’s an ambiguity here. Was it the prospect of a Trump presidency that made him sick? Or was it the breach of a protocol essential to the functioning of the FBI as an apolitical organisation? One of the advantages of dramatisation is that we can see how it was both, and can watch the unfolding of the situation in a scene-by-scene reconstruction based on Comey’s documentation of what was said, by whom, and in what circumstances.

The two episodes have a strong symmetry, portraying a political environment that undergoes a shocking reversal after Trump replaces Obama at the White House. What is palpably shocking to Comey, as to so many other senior people in American public service, is the sudden wrenching of the moral compass.

In the first episode, a newly inaugurated Obama calls Comey for an interview at the Oval Office. Kingsley Ben-Adir as Obama captures the syncopated rhythms of speech and movement that convey the essentially humorous intelligence with which the new president sizes up a key player in the structure of government. There’s no small talk in this scene. Obama asks a few straight questions, Comey offers one-line replies, and they agree to maintain the distance required to ensure the political independence of the FBI.

This is an administration that affords Comey the conditions in which he and his team can pursue their work with confidence in their designated authority. That, at least, is the theory. But political situations can throw a monkey wrench into the most stringently observed procedures. “You’re screwed,” Comey is assured, as he gets the news that the investigation into Clinton’s alleged mishandling of classified information may have to be reopened. This fact will be announced before the election, and it will indeed be white-hot.

Faced with choosing the least-bad option, he and his team start trawling back through 340,000 emails projected onto a panorama of screens from an array of laptops lined up as tagged exhibits. So this is what an FBI investigation actually looks like, in all its forensic technicality. But the politics of it have no such clinical precision, and those responsible for its pursuit are dominos in the line of fire.

Episode two shows us Comey scrutinised by Trump in the notorious “loyalty dinner,” in every respect an inversion of the conversation with Obama. Comey, who attended the filming of the scene, says he found it deeply unsettling to watch. The dialogue, much of it lifted verbatim from the notes Comey took immediately afterwards, shows us Trump without the public mask of sunny grandiosity. The pettiness of the egocentric pronouncements is all the more abject.

Comey listens dumbfounded, and here Jeff Daniels, with very few scripted lines, offers a masterclass in acting as an invitation to mind-reading. He captures Comey’s demeanour so accurately that he starts to look like him, though there is almost no physical resemblance. Brendan Gleeson as Trump has a more confronting task. The actor’s known reluctance to take on the role is understandable: this was not a job for an impersonator or caricaturist. It would involve an attempt to capture what is behind the extravagant persona at a time when its public impact is so explosive.

In many ways Gleeson’s performance works against the most familiar aspects of the persona. Trump’s features have grown into the form of the television smile, but Gleeson seems to be deliberately taking the gloss off, portraying him as grim-faced and dour away from the cameras. He replicates Trump’s intonation patterns exactly, but there’s something not right about the pitch of the voice, which kept reminding me of someone else. Watching the scene of their meeting again, the penny dropped. This was Brando’s Godfather voice, turning apparently casual chat to menace with his wheezy, plaintive undertones.

Comey has said in interviews that Trump reminded him of the mafia bosses he’d dealt with earlier in his career. In dramatic terms, this resonance creates compelling psychological tensions, though the series is purporting to offer us something close to documentary. As these two men face each other across a small table, what we are given belongs more to the mythos of American liberalism. Daniels left a Broadway run of To Kill a Mockingbird to take on this role. Are we being subliminally invited to view Comey versus Trump as Atticus Finch versus Don Corleone?

Far from creating an electoral debacle for the Trump campaign with its insider account of the counterintelligence investigation into Russian interference in the 2016 election, the release of the series has actually served to inflame a controversy that is now two-sided. During the past week Comey has spent long hours being grilled by Republican senators on alleged attempts to skew the evidence. Predictably, Trump upped the ante, and has been issuing a volley of furious tweets claiming that the investigation itself was an Obama–Clinton plot to sabotage his campaign.

One of Comey’s acknowledged weaknesses is that he has poor political instincts. That problem extends to Billy Ray’s aims with this miniseries. There is no such thing as a bombshell accusation against Trump, who lives in a no-holds-barred world of accusations and counteraccusations. He has already served up a package of October surprises, starting with the Covid-19 diagnosis and his aggressively staged “recovery.” Whatever else may be in store, the odds are that he’ll be the one putting down the cards — and we are only halfway through the month. •