On a roll with the electoral commission

New figures show a significant rise in the proportion of Australians enrolled to vote. Peter Brent looks at how and why 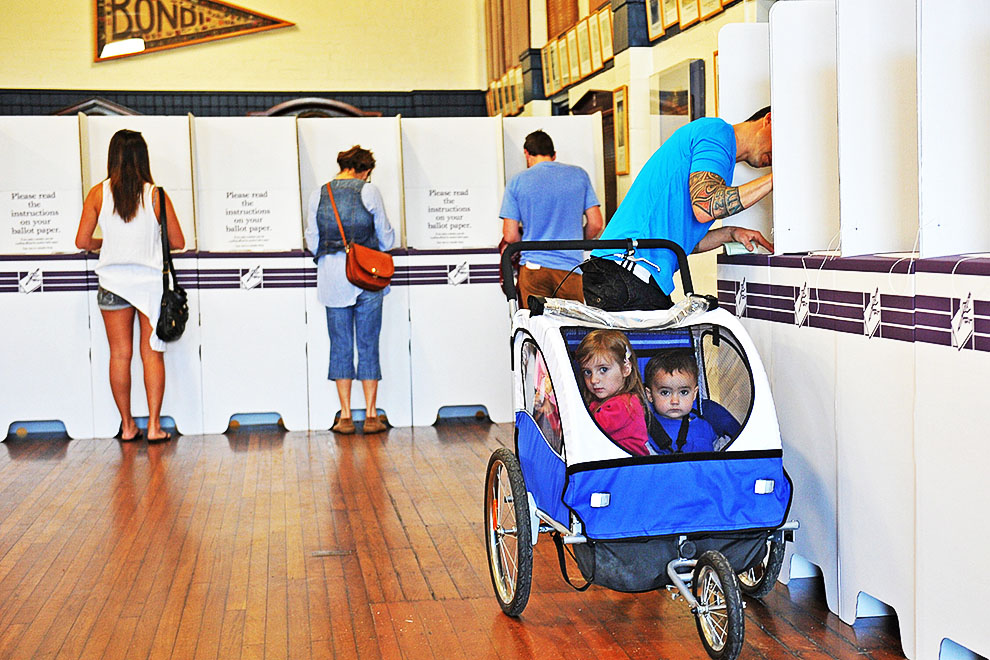 Voters and future voters at Bondi Surf Life Saving Club on the morning of the 2013 federal election. Paul Miller/AAP Image

The Commonwealth electoral roll – the list of every person able to vote – closed late on Monday 23 May for the forthcoming federal election. It contains 15,676,659 names, a figure the Australian Electoral Commission reckons to represent (to one decimal point) 95.0 per cent of eligible Australians. This is the highest proportion on the roll in recent decades, but perhaps not the highest ever; reliable figures don’t go back nearly far enough.

Statistics like this contain several caveats. The number of eligible people is only an estimate. And the numerator – that 15.7 million – will certainly turn out to be padded: after every election, the AEC sends letters to people who didn’t vote asking them to please explain, and inevitably some of them no longer live at those addresses and need to be taken off the roll. This has traditionally meant a slump in the roll’s numbers about six months after the poll, although that slump has been less discernible in recent years.

Dwarfing that number are the roughly one million Australians living overseas, of whom just 27,000 were enrolled as of 31 May this year. Most of the rest couldn’t get onto the roll even if they wanted to (basically because if they don’t vote, or they allow their enrolment to lapse, they’re off the roll until they live here again) but many of them could. Yet while the 27,000 is included in the AEC’s 95.0 per cent, those other potential enrolments aren’t.

Once upon a time, in olde England, there was no electoral roll. Not many people had the right to vote; they all knew each other; and voting was open rather than secret. The 1832 Reform Act expanded voting rights and put in place a procedure for constructing an annual electoral list. People would hand in forms containing their name, address and qualification. Revisions courts would test any challenges.

So when Australia began holding colony-wide elections in the following decade, we inherited those arrangements. In South Australia they evolved into much more. The one-shilling registration fee was abolished and the government took greater responsibility for the roll, sending council workers and police out, on horseback, to deliver forms to households. With the world’s first permanent (part-time) electoral officials, a returning officer for each lower house seat, enrolment could be continuous, with forms handed in any time of the year.

After Federation in 1901, the South Australian model was adopted and the first Australia-wide electoral roll was compiled from scratch, again, largely by state police on horseback. In 1911 enrolment was made compulsory (voting followed suit in 1924) and in the 1970s the electoral office began habitation reviews, sending casual staff out to virtually every Australian address to check who was enrolled.

The AEC cut back on its home visits in 1999, replacing them with continuous roll update, which involved obtaining regular data from other government agencies and using that to identify who had moved. Continuous updating was very efficient, but its effect turned out to be lopsided: the commission could, on discovering that Jane Citizen had moved house, take her off the electoral roll for that address, but could not list her at her new address without receiving a filled-in and signed form. They sent these forms to voters at their new address, but increasingly the forms went straight into the rubbish bin. And many, particularly young, Australians just expect “the government” to update their details anyway.

The electoral commissioner before this one, Ed Killesteyn, pushed parliament hard to allow the AEC to change people’s details, or put them on the roll in the first place, without receiving that form. In other words, automatic enrolment and update (or, as the commission prefers, “direct” enrolment, because “automatic” might imply an absence of human intervention and discernment).

In 2012 the Gillard government, with Greens support in the Senate, legislated for Killesteyn’s plan in the teeth of fierce opposition from the Coalition, who claimed it would open the system up to abuse – an argument that made no sense at all because automation works against electoral fraud. The real reason the Liberals hated the idea was the same one Labor and the Greens rather liked it: the more comprehensive the roll (whether due to direct enrolment or simply to more engaged and motivated electors), the better for left-of-centre parties, because the people who tend to fall through the cracks – such as the young, renters, students and itinerant workers – tend to skew to the left.

But the extent of that benefit was obscenely overstated by the media – who can be relied on to opt for the dramatic story, particularly on a mundane topic such as enrolment – and even by some academics.

In any event, the AEC has been more conservative in directly enrolling people than, say, its NSW counterpart, and the data suggests that much of the improvement derives from the use of the online updating facility at the AEC’s website, introduced in its present form in 2013, which prevents people dropping off the list in the first place.

That might all sound fine, but does direct enrolment have drawbacks?

One argument is that it leads to a decrease in turnout, but that’s illusory. Yes, some people entered on the roll without their knowledge, or their consent, will continue to fail to vote but will now be counted as non-voters. So the number who turn out as a percentage of the roll will be smaller than it would otherwise have been. But as a percentage of eligible population, the turnout will rise because, in the past, hundreds of thousands have tried to vote and couldn’t because they weren’t on the roll.

In some countries, most of them in Europe, automatic enrolment is a corollary of national ID cards. In Germany, for example, enrolment is handled by local councils, whom residents must inform when they move address. Electors can opt off the roll if they wish.

The purpose of enrolment should be to help electors exercise their right to vote. In Australia, though, the discussion is muddied by that malformation in our arrangements, compulsion. (I’m not a fan.) In this context, direct enrolment can be cast as a heavy-handed way of forcing us to meet our obligations.

And to complicate things, the AEC fines people for not voting, but has not, since the 1980s, fined anyone for not enrolling. Yet compulsion discourages some long-term absentees from enrolling because they fear they’ll be punished for past misdeeds (despite the commission’s assurances otherwise).

And furthermore, thanks to direct enrolment, many Australians alienated from the political process, a lot of them poor, will for the first time be fined.

The worst aspect of compulsion is, well, the fact that it is enforced: that non-voting is followed up and penalised, disproportionately affecting disadvantaged Australians. Direct enrolment exacerbates this outcome. That’s its one drawback. •