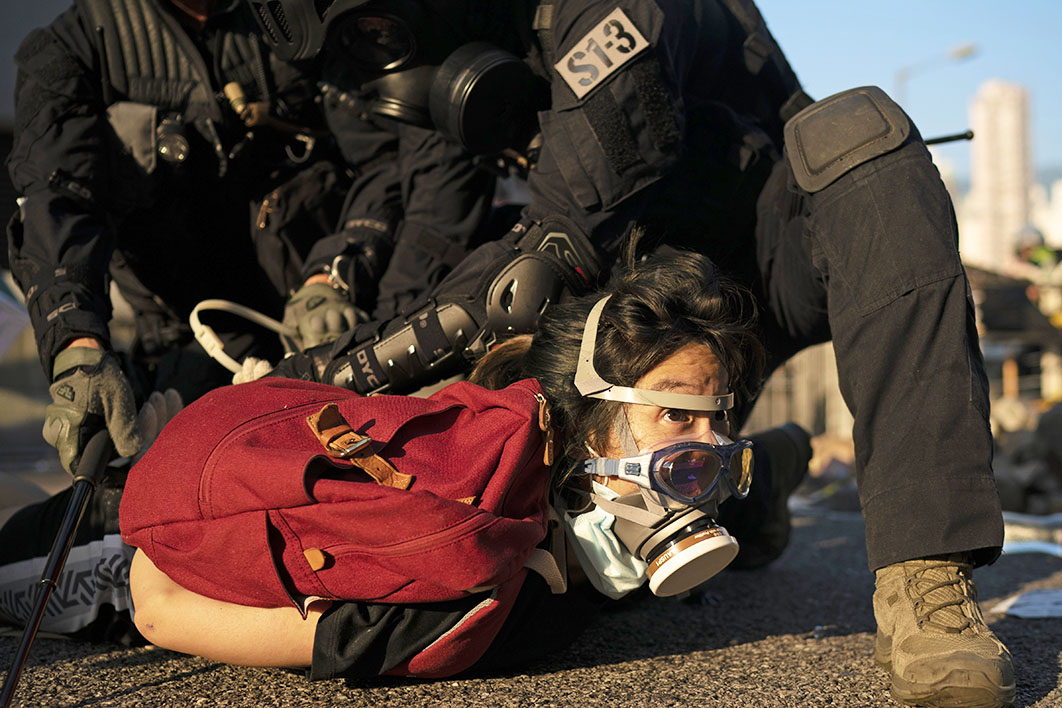 It was a parade on a scale that only dictatorships can pull off: the supreme leader speaking from a vermillion balcony overlooking the Square of Heavenly Peace, the goosestepping soldiers, the leader’s drive atop a Red Flag limousine past miles of saluting battalions, tanks, drones and missiles.

The skies were clear except for fly-pasts by jets and helicopters. Factories had been shut for days, kites and pigeons banned. Residents of apartments facing the parade were told to stay away from their windows, or in some cases to move out temporarily. Citizens permitted to watch had been carefully vetted.

It was all very splendid, but in one corner of China rain was falling on the parade. In Hong Kong, the semi-autonomous former British trading post on the far south coast, demonstrators again defied police and expressed their alienation from the regime whose seventieth anniversary was being celebrated in Beijing.

With the People’s Republic’s birthday party now over, many are wondering if the gloves will come off in Hong Kong. The protests that started in June against a plan to permit extraditions to the mainland are entering their fifth month, increasingly spearheaded by young people willing to do battle with sticks, stones and Molotov cocktails.

Tens of thousands, many dressed in black and tossing the fake “heavenly” money usually used in Chinese funerals, defied a police ban and made a mostly orderly march through the main business and government district on Hong Kong Island soon after the Beijing ceremony. But across the harbour in Kowloon protests were at their most violent so far.

Police in riot gear fired tear gas and sprayed blue-dyed water on protesters, who fought back. Some demonstrators sprayed acid, police said, hitting bystanders and journalists. A policeman shot a high school student in the chest with his pistol, allegedly in self-defence when students attacked with iron bars, the first live-fire casualty since the protests started. The eighteen-year-old was reported likely to recover after emergency surgery. Across the city, battles continued into the night, in contrast to fireworks and staged ceremonies in Beijing. Police said twenty-five officers were injured, and some 180 protesters arrested for rioting.

The 30,000-strong Hong Kong police, long regarded as “Asia’s finest” as measured by training and discipline, have become steadily more aggressive, roughing up detainees and deploying nonlethal but injurious crowd-control weapons with little prompting. Some rumours suggest Cantonese speakers from the mainland People’s Armed Police have been put in local uniform. Untroubled by police, triad-like vigilantes have been attacking protesters.

According to Reuters, the number of troops at the People’s Liberation Army garrison in Hong Kong has quietly doubled to between 10,000 and 12,000 in recent weeks. They remain in their barracks, and local protesters have generally left them alone. But will that change? Can Xi Jinping, the Communist Party supremo showing off such firepower yesterday, allow the defiance to continue?

Forceful intervention would come at an awkward time, with China’s growth slumping and Donald Trump threatening further trade limits. While Hong Kong’s economy is less than 3 per cent of China’s (it was 18 per cent in 1997) and the enclave is no longer China’s main trade portal, its financial sector and share market remain vital to investment flows despite the rise of alternative financial marketplaces in Shenzhen and Shanghai.

Soundings by China scholars suggest Xi remains confident of being able to defuse the Hong Kong crisis without either the outright use of force, which would bring international odium and economic damage, or political concessions that would make him look weak to party peers.

Andrew Nathan, the Columbia University co-editor of The Tiananmen Papers, writes this week in Foreign Affairs that two well-connected Chinese academics assure him Beijing is confident that “its local allies will stand firm and that the demonstrations will gradually lose public support and eventually die out. As the demonstrations shrink, some frustrated activists will engage in further violence, and that in turn will accelerate the movement’s decline.”

Beijing is convinced, these sources tell Nathan, that its supporters among local elites, including big business, trade unions and politicians, as well as underground communists and some criminal triads, can eventually rely on a majority of Hong Kong residents becoming fed up with the disturbance. These elements seem to be assuring Xi that the protest derives from the stagnant incomes and escalating property prices that put even a garage-sized “nano-apartment” out of reach of young people.

Not coincidentally, party organs have started attacking the business oligarchs of Hong Kong. The People’s Daily has suggested the government seize some of the vacant land that big property combines develop at a pace that keeps apartment prices sky-high. Getting the message, one company has already promised to donate a fifth of its land holdings for new public housing.

Li Ka-shing, the ninety-one-year-old patriarch of the CK Hutchison conglomerate and once Beijing’s favourite tycoon, found himself called “the king of cockroaches” by a local pro-Beijing politician after taking out advertisements calling for restraint all round and suggesting that the territory government should make peace gestures.

Xi, as a Marxist, might be inclined to believe materialism will win. Not even the purging of his PLA marshal father and his own rustication during the Cultural Revolution have turned him from the belief that complete party control is essential for China’s progress. Yet many analysts suggest these blinkers are stopping Xi from seeing what is going on. Up to two million of Hong Kong’s people have come out on the streets at various times against the extradition law. The slowness in withdrawing that legislation allowed the protesters’ aims to expand to full democratisation of Hong Kong’s government, so far formed by a highly limited franchise.

Where nearly half of locals told opinion polls at the 1997 handover from Britain that they were proud to be part of China, only a quarter say so now. Steadily, Beijing’s attempts to draw Hong Kong closer to mainland norms, promote use of Mandarin over Cantonese, and extend its police powers into the territory have replaced pride with apprehension. The British legacy of freedom of expression and rule of law are now rallying points. Some protesters wave Hong Kong’s old British ensign.

Older people may not approve of throwing Molotov cocktails at police stations, but there appears to widespread admiration for the passion of the young. When peaceful action by two million citizens gets ignored, they tend to agree with the slogan daubed by the young people who invaded the Legislative Assembly on 1 July: “You have taught me that peaceful protest is useless.”

With twenty-two of the fifty years of “one country, two systems” gone, autonomy already being eroded, and Xi Jinping throwing China back to Maoism, these leaderless young people now in their early twenties are expressing a desperation that if they don’t act now, their freedoms will certainly vanish by 2047, if not before.

The next key date on Hong Kong’s political calendar is 24 November, when elections will be held for the territory’s local councils. Currently control is held mostly by the well-organised and funded Democratic Alliance for the Betterment and Progress of Hong Kong, a pro-Beijing group, and allied individuals and trade unionists.

If these elements are swept from the councils by continuing protest, Xi Jinping faces a democratic revolt reaching from the grassroots into the lower echelons of government — long before any intervention in the housing market can show results. Let’s hope Xi is not asking himself: what would Mao Zedong and Deng Xiaoping do? •