One little piece of earth which is ours

Does every Australian have a right to decent housing? Governments might say so, but they’re not doing much to make it happen, writes Peter Spearritt 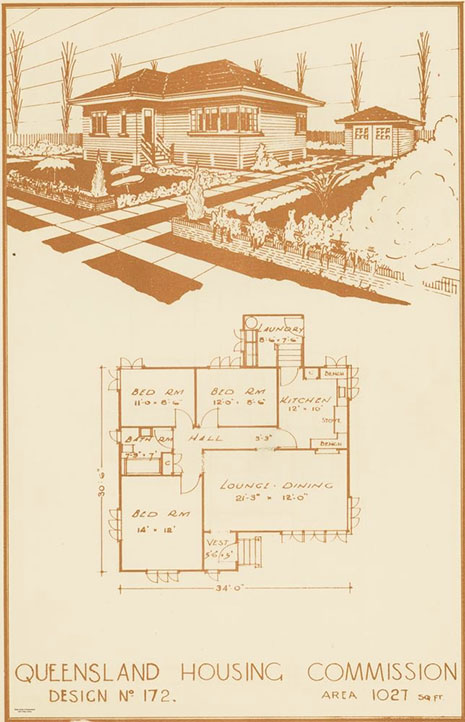 Drawing and floor plan of house design no.172 from the Queensland Housing Commission, 1950. John Oxley Library, State Library of Queensland

HOUSING waxes and wanes as a topic of public concern in Australia. During boom times, owner-occupiers rejoice in the rising value of their asset, though some worry that the younger generation will never be able to afford a home. When prices are in the doldrums, as at present, owner-occupiers get grumpy but prospective home purchasers – egged on by first homebuyer grants so popular with political parties facing an election – are out in force inspecting new estates on the urban fringes or apartments nearer the city centres.

In recent decades about a third of our dwellings have been owned outright, a third have mortgages attached, and a third are rented from private or, less commonly, public landlords. This was not always so. Just after the second world war well over half the population of Sydney and Melbourne were tenants, and overcrowding in most cities was rife. Returning soldiers, including some with unhappy memories of families being tossed out of their dwellings during the Great Depression, expected a better deal.

As Patrick Troy charts in his book, public housing – that neglected subset of the rental market – developed in Australia through a combination of political will, the influence of inspired thinkers and the drive of some exceptional bureaucrats, most notably H.C. “Nugget” Coombs, during the intellectually lively days of early postwar reconstruction. Accommodating Australians analyses seven decades of public housing policies, debates and outcomes. The result is a book that manages to keep the Commonwealth’s intervention in the foreground while taking each of the states seriously – an unusual achievement in public policy writing in Australia. Many federalists are apt to forget that our state governments are still the primary landowners in Australia, and that each of them could make a much better fist of public housing than they’ve done lately or look like doing in the near future.

The centrepiece of Troy’s book is a close analysis of each of the Commonwealth–State housing agreements, starting with the first in 1945, and ending with the twelfth and last, which wound up in 2008. He calls the first agreement a “public housing dream” that responded to the extreme housing shortage after the second world war (very few dwellings were built during the war because of material and labour restrictions) and the demand of returned service people for a better life.

Troy demonstrates how governments have intervened in housing markets in diverse ways, including via war-service home loans and other finance options, by using government-owned land, and by building and managing apartments and houses. What’s left of social equity in the inner cities in Australia is now down to what’s left of this public housing stock. If you took away the tower blocks in inner Melbourne, the flats in Milsons Point, Balmain and Waterloo, and the flats in West End in Brisbane, these three cities would lose almost all their low-cost housing now that most boarding houses have succumbed to gentrification. The same is true of many of what were once on the urban fringe but are now the middle-ring suburbs in all our capital cities. And if we didn’t still have some public housing stock in many of our country towns, people living there on low incomes – including many Indigenous households – would be without an adequate roof over their heads.

BY THE time of the 1949 election, the Labor Party had not done enough to fulfil its promises of a better postwar world. Opposition leader Robert Menzies seized the ideological initiative on home ownership, promised reductions in the rationing of food and other essentials, and won the election. His Coalition parties didn’t see good housing as a right, but nor did they ditch the Commonwealth–State Housing Agreement. Just before his 1954 election policy speech, two elections later, Menzies told the state premiers that they could sell Housing Commission houses on terms over forty-five years. The national development minister, Bill Spooner, was opposed to the sale of public housing because low-income workers had “no culture of thrift or sense of community obligation.”

By the end of 1956, over 14 per cent of all dwellings built in Australia were public housing and perhaps 25 per cent (this is hard to measure accurately) owner built. The middle-ring suburbs of our biggest cities were alive with owner-builders, often living in makeshift garages on site. Land was cheap, much of it left over from the 1920s subdivision boom, and there were none of the high up-front costs now associated with land subdivision. Most roads were unpaved, the new suburbs were unsewered and precast septic tanks were the order of the day. As long as they had one income earner – and most did – even quite poor households could get a modest home. In New South Wales the majority of these houses had fibro cladding; in Melbourne and Brisbane weatherboard was the most common building material. These houses were of variable quality, but most are still standing, and many have been successfully renovated.

In 1956 Menzies changed the housing agreement, directing almost a third of the funding to a “home builders account” that facilitated home purchases through building or cooperative societies. Home ownership peaked at 71 per cent a decade later. Menzies, who in 1942 had remarked that one of our “best instincts” is to “have one little piece of earth with a house and garden which is ours,” could happily reflect on the electoral popularity of this sentiment.

One of Troy’s unanticipated heroes is Queensland Liberal senator Annabelle Rankin, the first woman to be appointed as a federal government minister. Rankin wanted her housing department to develop a research and policy capability, but she was continually thwarted by Treasury, the prime minister’s department and the Public Service Board, which together made the key personnel resourcing decisions and did not like upstart ministers or departments. There is a hint in this account of Troy’s own battles with Treasury when he was deputy head of the Department for Urban and Regional Development in the Whitlam government. He was involved in devising an urban and regional budget to examine the locational impact of Commonwealth government spending, an initiative that Treasury regarded as an affront.

Troy provides some telling insights into the state of housing policy before the election of the Whitlam government in December 1972. He cites the comments of the chair of the NSW Housing Commission, J.M. Bourke, who complained that the “continuing erosion” of the commission’s store of rental cottages by a Coalition state government put in serious jeopardy its ability to provide “housing for low income earners.” Once sold, he said, the housing estates were irreplaceable. Although the Whitlam government restricted the sale of new stock and significantly increased funds for public housing, the waiting lists continued to grow.

In the post-Whitlam era public housing has not fared well. Governments have paid more and more attention to first homebuyer grant schemes – a quick economic boost – and means-tested rent allowances, while all the hard issues, including the way housing is or isn’t taxed, are deftly avoided. Meanwhile health and education attracted a growing share of the budget, and that trend has continued in the GST era. The major political parties have attempted to outbid each other in providing middle-class welfare rather than focusing on housing low-income earners adequately.

Troy suggests it is too early to assess the effectiveness of the National Affordable Housing Agreement of 2009, which assured the states that funding for community housing providers, crisis accommodation, homeless refuges and Indigenous housing would at least be maintained at the level of the defunct housing agreement. But he doubts whether the National Rental Affordability Scheme, which offers incentives to both the private sector and community organisations, will reach its target of 50,000 high-quality homes and apartments at rental levels at least 20 per cent below the prevailing market.

ALTHOUGH Accommodating Australians is primarily concerned with the political economy of public housing provision, including town planning, Patrick Troy doesn’t ignore design and construction. He points out that the architects who designed Housing Commission homes worked within tight size and cost constraints but managed to sheath this in “respectable” designs that still looked like familiar houses, often with formal portico entrances and feature chimneys, especially in Victoria. In New South Wales, the frugalities of the late 1940s to the 1960s included fibro cladding, but the three-storey walk-up flats built in NSW in the 1960s, while devoid of decoration, were solidly built, in double brick, with concrete floors. The very small apartments in the often-criticised tower blocks built in Sydney and Melbourne in the 1960s and 1970s led to the allegation that these were new slums in the sky. But take away those blocks – some just bedsitters and one-bedroom apartments – and thousands of single people, often predeceased by a partner, would not have had a roof over their heads. In marked contrast to Britain’s demolition of old council tower blocks, most of these blocks are still standing. While sociologists might agonise about social mix, we’ve mercifully avoided the worst of the housing ghettoes to be found in many societies, including the United States.

The disconcerting conclusion I draw from Accommodating Australians is that all the major political parties and the state and federal governments have ceased to take seriously the notion that good-quality housing is the right of all Australians. People with mental and physical disabilities get preference, as they should, and many do get adequately housed. But the waiting lists continue to grow, and only people in the direst circumstances, including refugees, get to the top of the queue. The notion that hardworking Australians in poorly paid jobs also deserve decent housing within a reasonable distance of their work is dead if not completely buried. While the role of the former state housing commissions is now shared among state housing departments, a variety of federal agencies and impressive community housing providers, public/welfare/social housing continues to decline as a proportion of all housing stock in Australia.

All state governments still have ample, well-located urban land that they could contribute towards new public housing. And occasionally they do, especially in supporting the growing community housing sector – in fact, many state governments now want to offload their remaining stock to community housing companies. This may work, but only if state governments don’t use this as an excuse to shed any remaining responsibility for housing their citizens. Some larger councils have also offered significant support to the not-for-profit community housing sector. In cities and towns throughout the nation, tracts of railway land, excess and unused land held by schools, and other sites lie idle. And that’s before we look at privately owned and underutilised land, from elite golf courses closely guarded by their affluent custodians to shopping centres whose developers are more interested in providing car parking than they are in helping to create viable suburban communities. Troy has a dig at Westfield for its “predatory” favouring of high turnover operators at the expense of smaller businesses that still contribute character and variety to our remaining traditional shopping streets.

While it’s not exactly bedtime reading, Accommodating Australians will allow you to hold your own in any debates with developers, mining entrepreneurs demanding subsidised housing, ministerial minders, misguided academics and employees of left- and right-wing think tanks. 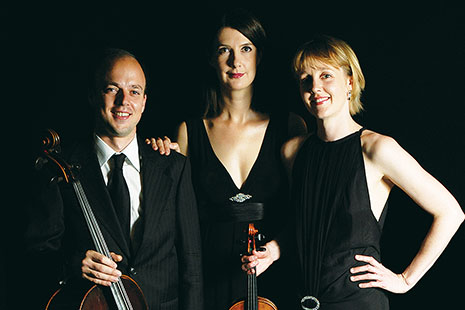