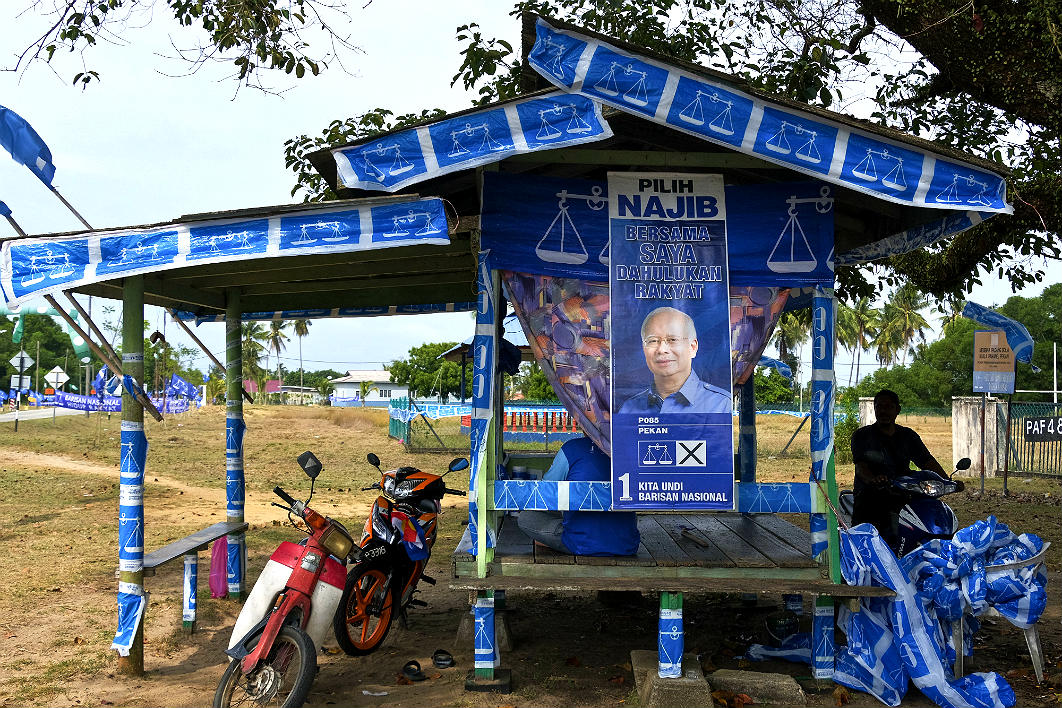 Malaysia’s official eleven-day election campaign kicked off this weekend as candidates presented themselves for nomination ahead of voting on 9 May. The Merdeka Centre and other pollsters are predicting a win for Najib Razak and his ruling Barisan Nasional (National Front) coalition, hardly a bold prediction after thirteen similar wins stretching back to Malaya’s transition to independence in the mid 1950s. What makes this election different is a focus on the role of two Chinas — the Big China of development loans and foreign policy deals and the local Chinese community, which tends to support the opposition.

As it does at every election, the government has shaped the contest to minimise competition from the opposition parties, this time grouped in a coalition called the Pakatan Harapan, or Alliance of Hope. The short campaign and the weekday vote is designed to keep turnout low; revised electoral boundaries carry on Malaysia’s rich tradition of malapportionment and gerrymandering; and a new “fake news” law is clearly intended to constrain political discussion by Malaysians on social media and in the foreign press.

Not surprisingly, Najib himself has predicted an increased majority, not least in a recent interview with Bloomberg, his first with a foreign media outlet for more than three years. The PM’s boycott of foreign media began when the 1MDB scandal first erupted in 2015 with allegations that a state investment fund led by Najib had lost billions of dollars and racked up billions more in debt. The fund is still being probed in the United States, but similar investigations in Malaysia have found Najib innocent of all wrongdoing, and his UMNO party, which dominates Barisan Nasional, has closed ranks around him. Electorally and institutionally speaking, Najib appears to have his bases covered, at least within the country he leads.

The mood, meanwhile, wavers somewhere between indifference and insolence. When I asked political observers and insiders in Kuala Lumpur about the election recently, they responded with sighs and eyerolls before sharing their views. Beyond the capital, seasoned observers are reporting unusually silent audiences at the usually lively opposition campaign rallies known as ceramah, their faces unreadable. But this subdued reaction hasn’t stopped Pakatan’s campaign from circulating images of well-attended events accompanied by images of empty chairs at Barisan ceramah.

At one of Barisan’s events, to which taxi drivers were coaxed with a promise of free fuel cards to the value of 800 ringgit (a bit less than half the average monthly wage), the crowd declined to be stage-managed by officials, kicking over barriers and heading for the counter. Nobody seems to be performing as expected, except when they lament the spiralling cost of living. Food prices have soared, and the price of the widely eaten kembong — Indian mackerel, now seen as a cost-of-living bellwether — has more than doubled since 2015.

Reading the mood on the street mightn’t be easy, but it’s a different matter on Facebook and the encrypted carrier Whatsapp. Here, the fracturing of Malaysia’s biggest and once-stable voting bloc — the nation’s majority Malay Muslims — is evident in debates raging in text and video about who is to blame for cost-of-living pressures: China or the Chinese?

“Big China has begun the process of colonising Malaysia,” reads one message circulating on social media, with a link to a video from one James J. Tsidkenu’s Christian Sixth Seal News Network breathlessly outlining China’s Belt and Road plans. “Rise, all the races of Malaysia: Malays, Chinese, Indians, Iban, Kadazandusun and others, Malaysian citizens,” the blurb says:

Please listen and watch this video and act IMMEDIATELY BEFORE it’s too late. CHINA is targeting LEADERS who are corrupt and kleptocratic for ONGOING bribery, and finally MALAYSIA will be mortgaged… The SIGNS are CLEAR and EVIDENT. Look around us… CHINESE projects are everywhere. This is an early ATTACK of THEIRS against Malaysia.

The use of the term “kleptocrat” — increasingly common in opposition messaging — is clearly intended to remind voters about the 1MDB scandal, which indicated that enormous amounts of money were channelled through Najib’s bank account. (He countered that they formed a Saudi donation for countering violent extremism.) Add to that the fact that some of 1MDB’s debt has been bailed out by China, and that Chinese projects are altering the Malaysian landscape, and you have all the ingredients of a conspiracy against ordinary Malaysians.

Videos like this are part of a narrative in which 1MDB’s missing billions, which could have been spent on more effective social insurance, have helped bankrupt Malaysia. According to this line of argument, the resulting debt has acted as an invitation to China to finance expensive projects — including an east-coast rail link and a vastly upgraded South China Sea port using Chinese labour and serving China’s Belt and Road interests — that Najib can use as electoral inducements.

The narrative doesn’t stop there. When Malaysia fails to repay its Chinese debts, China will take over the country. As evidence, opposition leader (and former prime minister) Mahathir Mohamad has repeatedly pointed to Sri Lanka’s leasing of its Hambantota Port to China for ninety-nine years in return for debt relief. “We don’t want to sell chunks of this country,” he told Singapore’s Straits Times earlier this month, promising to subject Chinese investments to greater scrutiny should he come to power.

Other opposition material uses images of the Malay Peninsula dotted with Chinese projects. One, circulated on Whatsapp by opposition micro-targeting outfit Invoke Malaysia, points out that Chinese projects are exempt from the goods and services tax, another cost-of-living pressure point for Malaysians. This high-contrast, high-impact imagery (below) juxtaposes Chinese president Xi Jinping with an elderly Malay Muslim “uncle” of seemingly modest means. “Quiz: Between these two uncles, which one gets a GST exemption?” asks the text. The coming election is “the ONLY and final chance that WE HAVE,” the Whatsapp message continues. “CHINA is now USING kleptocratic leaders to achieve its colonial aims over Malaysia… like in other countries that HAVE been mortgaged like Pakistan, Myanmar, Sri Lanka, African nations, etc.” To make sure its audience understands which Chinese are at fault, it finishes with these words: “This is a threat that is REAL, EVIDENT and TRUE that comes from BIG CHINA. Not Malaysian Chinese BUT communist CHINA from BIG CHINA.”

The opposition’s China campaign contrasts strongly with the government’s allusions to the Chinese threat within the nation. Its target is the Pakatan coalition, which includes the Democratic Action Party, whose membership is largely ethnic Chinese. The government’s argument is that the opposition represents a potential Chinese takeover of sovereignty from within, and it is precisely this message that Pakatan arguments are working to flip by shifting the source of the Chinese threat to Big China while burnishing its own credentials as a multiracial coalition that will protect local Chinese.

Malaysian Islamist organisations, which often take the initiative in developing Islamist justifications for Barisan rule, have been working to blur the boundary between Big China and Malaysian Chinese. One of them, ISMA, hosted a forum in March to promote the idea that the entire Chinese diaspora, no matter its physical or generational distance from the People’s Republic, will fall into line with Beijing as China begins to “Sinicise” Malaysia.

This line of argument dovetails with Barisan’s repeated assertions that the opposition is “led” by the Democratic Action Party, which a state mufti described in 2015 as kafir harbi, or infidels in a state of war against Islam and Muslims. Malaysia’s previous election result, in which the government lost the popular vote partly because Chinese voters deserted it, was racialised on the following day by the front-page headline of the UMNO paper Utusan Malaysia, “What More Do the Chinese Want?”

Which Chinese, the opposition might well ask. Pakatan Harapan is counting on two things: that Malaysian Chinese will support it at least as strongly as they did last time; and that its effort to neutralise the “Chinese threat” by pointing to Big China might further fracture the Malay Muslim voter bloc. Even the Merdeka Centre is predicting an 8 per cent Malay Muslim swing away from the government. The next eleven days will show whether the “Chinese threat” can be countered by the “China threat” to deny Najib the increased majority he seeks. ●