Over the top with Campbell Newman

The lord mayor of Brisbane might be a politician of his times, but he’s adopted a risky course, writes Graeme Orr

Campbell Newman talks to the media during the flooding in January. Andrew Kesper/Wikimedia Commons 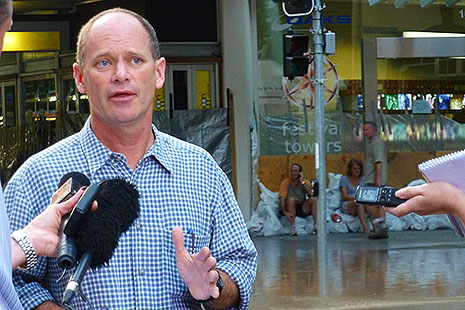 Campbell Newman talks to the media during the flooding in January. Andrew Kesper/Wikimedia Commons

IMAGINE Bob the Builder declaring that he’d had enough of the freedom of Bobsville and wanted the reins of the outlying areas as well, right up to the borders. Plausible scenario, or a case of gonzo script-writing? Well, something like that storyline gripped Queensland politics last week, as Brisbane’s Lord Mayor Campbell Newman executed a swift coup d’etât against the state Liberal National Party’s parliamentary leadership, announcing he will seek the premiership from outside parliament. Formally, the LNP has recycled an erstwhile leader, Jeff Seeney, but Seeney is happily portraying himself as a puppet to Newman’s puppeteer.

Newman’s manoeuvre has attracted every imaginable reaction, from initial bewilderment and guffawing comparisons with the Joh-for-PM experiment to more neutral but still astonished adjectives such as “audacious.” This week has brought the predictable honeymoon, celebrated by News Ltd’s Courier-Mail and Sunday Mail in headlines such as “Can He Do It? Yes He Can!” (Apologies, reader, I did not invent the concept of politics-as-childish-metaphor.)

Will it succeed? Time will not only tell, but as W.H. Auden reminded us, “Time only knows the price we have to pay.” Time, in this case, could be measured in many months. An election need not be held until June 2012, and recent speculation that Premier Anna Bligh would call a snap poll to capitalise on opposition instability has proved ill-founded.

The Labor administration, led by Bligh since late 2007, entered its thirteenth calendar year adrift in the midst of a protracted economic slump and electoral dissatisfaction. Then, down came the rains and, like Incy-Wincy, the government climbed up the spout again. The performance of its ministers, and especially Bligh, during the floods and cyclone – in tandem with the tendency of disasters to engender community spirit and remind us that government isn’t such a bad thing – saw a rapid revitalisation of electoral respect, especially as measured in the latest Newspoll.

Some say the premier cannot call an unduly early election without appearing completely opportunistic. After all, she only recently pledged to avoid electioneering until the rebuilding was complete. Yet any breach of faith by Bligh has already been outflanked by a double breach committed by Newman. Just two months ago he promised not only to serve the final year of his second four-year term as mayor (council elections are due in March 2012), but also to run again for that position.

Bligh, however, is unavoidably in Campbell’s stew. Newman is already on the state hustings – even before resigning as mayor – and the media is already allocating online space to the “Queensland election.” In the febrility of such campaigning, normal governmental processes will only be able to last so long.

The premier needs to wait-and-see: to wait out Newman’s honeymoon and to see if an inevitably tough budget will be received as responsible rather than mean-spirited. More significantly, Labor has to trust that structural flaws will appear in the LNP’s unprecedented arrangements. It must hope that Newman will make policy demands that the LNP party room can’t accommodate, or that Seeney will make pronouncements in parliament that Newman repudiates.

In searching for an analogy for a leader-outside-parliament like this one, electoral expert Antony Green had to reach into Canadian practice. There, party leaders are elected by a “closed primary” of party members, and can therefore be any party member, although the leader is quickly found a seat in parliament if need be.

A better analogy is the directly elected executive. Newman’s political career has been forged in direct, mayoral elections, and this deeply shapes his methods and presumptions. His whole approach channels the United States’ style of direct appeal to “the people,” with bare lip-service to the traditions of party democracy, let alone parliamentary government.

A core element of our British inheritance is the principle of cabinet government. The premier is first amongst equals and responsible to parliament; the office of opposition leader, and his shadow cabinet, mirrors those roles. Of course, parliamentary democracy weakened over the early twentieth century, and was more or less supplanted by strong party democracy. Nowhere has this been more apparent than in unicameral Queensland. In recent decades party democracy itself has weakened, through a mixture of ideological drift, eroding party bases and a media suffering from a very short attention span. On the 1997 reckoning of American political scientist Bernard Manin, ours has become an age of “audience democracy,” a personalisation of politics in the form of a focus on the individual and above all the leader. It is almost as if mass democracy became too complex, so we are returning to the more colourful, and discretionary, ways of monarchical power.

If this makes Newman a politician of the times, it is not without risk. The possibility of splits between Newman, as leader in waiting, and parliamentary leader Seeney or his party room, is the most obvious. In a sane world, dissension within a party should be accepted as natural, even healthy. But Newman’s authority within the state party is not organic, and he lacks even the representative mandate of having been elected as an MP.

A host of other formal impediments flow from the awkwardness of the position Newman has created. The most obvious is that he will take the profile of party leader without the salary. He will not even receive an MP’s pay or electoral allowance. Newman has already insisted that the party machine, or rather its donors, make that good. Seeney, meanwhile, will possess the resources and staff of the leader’s office. In Queensland, this even includes public money for policy advertising, to partly offset government advertising. Newman will want the puppet strings to be taut.

An irreducible element of responsible government is the opposition’s role in holding the government to account. Ventriloquism may have to occur during Question Time. Labor MPs will be able to attack Newman under the absolute freedom of parliamentary speech; Newman will not only have no right of reply, he will enjoy no such counter-freedom. He and the party director will also have to be careful in using any threats to enforce party solidarity; while a parliamentary leader is permitted to insist on cabinet solidarity, outsiders from the party machine are technically in contempt if they threaten pre-selections to limit MP dissent.

Comparisons between Newman’s move and the (ill-fated) Joh-for-PM tilt of 1987 – when Premier Bjelke-Petersen sought to mount a Queensland takeover of the federal Nationals and the Coalition from outside parliament – are wishful thinking by Laborites. Newman’s is less a hostile takeover and more a case of a party being merged into one man’s ego and bandwagon.

A more enlightening parallel lies in Kevin Rudd’s deposal. In both instances, a party that had been cruising in the polls for a long time encountered leadership wobbles. This precipitated a putsch from within the machine (rather than the party room) on the back of limited internal polling. Et voilà! A new leader, minted overnight, not out of any policy debate or difference, but from assumptions about style.

Except there is one difference. Gillard entered promising a consensual style within her party and cabinet; she is a creature of party democracy and compromise. Newman enters demanding complete control. Indeed, without it the arrangement may founder. The fűhrerprinzip is not only the internal logic of his manoeuvre, it is the external logic as well.

Newman’s appeal begins and ends in the energetic “Can-Do Campbell” slogan, a slogan he has played on for years as mayor. It owes as much to perceptions (his background as an army engineer, his direct manner of speech) as reality. (Newman’s drive has been for big infrastructure, projects, especially those involving tunnelling, to address Brisbane’s traffic snarls. One of these is now bankrupt and residents have experienced years of rate increases well above the CPI.)

Will Newman succeed? For the sake of what is left of parliamentary and party democracy, we might hope not. Certainly, there’s nothing intrinsically wrong with the idea of multiple leaderships. The Green Party of Aoteoroa/New Zealand, for instance, has accommodated, simultaneously, leaders within and outside the parliamentary team. But that is on a genuine, long-term, co-leadership model.

On the other hand Labor, at heart, is as weak in Queensland as elsewhere. The volatility of the post-flood polls implies no renaissance for the government. Political lore, pre-dating Professor Manin, has it that Queensland is particularly susceptible to the “strongman” leader. The state has urbanised dramatically in the decades since Bjelke-Petersen, but even Beattie’s success owed something to playing up to that role. Bligh is intelligent, if bureaucratic, with her roots in community organisations and the public service. Newman radiates blokeyness. One suspects Newman will succeed but, as Auden said, “If I could tell you, I would let you know.” •

Graeme Orr researches electoral law at the University of Queensland and is author of The Law of Politics (Federation Press, 2010).

The spending debate in Washington is coming to a head, writes Lesley Russell

President Obama’s budget plan will destroy jobs because “it spends too much, it borrows too much, and it increases the deficit,” according to House speaker, John Boehner (above). Alex Campbell/Medill News Service 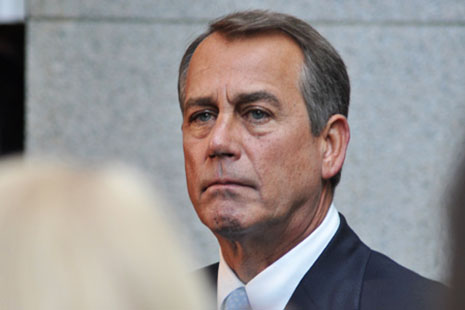 President Obama’s budget plan will destroy jobs because “it spends too much, it borrows too much, and it increases the deficit,” according to House speaker, John Boehner (above). Alex Campbell/Medill News Service