Panopticon in your pocket

The government releases its COVIDSafe app, and research continues around the globe 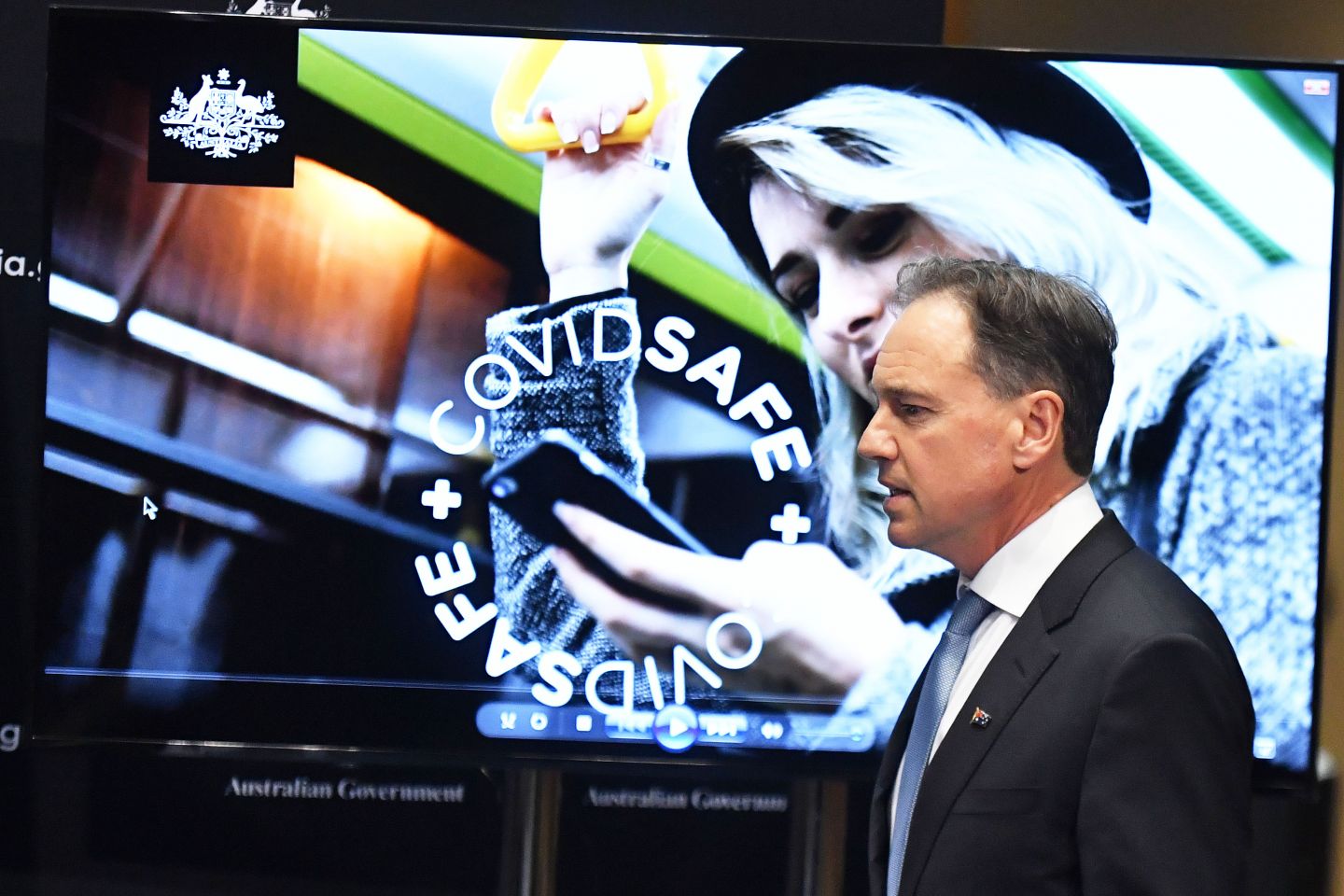 Contrary to some expectations, the launch of Australia’s contact-tracing app, COVIDSafe, seems to have gone well, with nearly 1.2 million downloads in the first twelve hours. Whether the bump in early adopters will be sustained remains to be seen. Aside from the early musing about making the app compulsory, the government has heeded all the advice about emphasising privacy and altruism in promoting it.

Initial estimates of the number of downloads needed for COVIDSafe to be effective have also been walked back. While a high take-up rate is needed to capture the network dynamics that will give the app real power, even lower levels of coverage will presumably provide some assistance to the manual process of contact tracing that has thus far been the mainstay of Australian epidemic control efforts.

By linking the end of physical distancing and the resumption of full economic activity to the extent of COVIDSafe’s take-up, the government is embarking on an unusually explicit exercise in collective social responsibility. If nothing else, it will highlight the extent to which everyday life depends on civic mutuality. The debate about the app has also vastly increased awareness of the normally hidden privacy issues that underlie every online exchange: exactly the type of explicit attention that Europe’s General Data Protection Regulation, or GDPR, was aimed at.

In the process, two models are fighting it out: one in which personal data exchange is subject to informed consent as part of a social bargain freely entered into; the other in which shadowy corporations collaborate with state apparatuses to maximise covert surveillance. The Australian government is seeking to position COVIDSafe within the first; its opponents fear it is a version of the second.

Those concerned about opaque surveillance viewed with alarm the news that a company called Palantir is involved in creating Covid-related data-management systems for a slew of health systems, including Britain’s National Health Service and the US Department of Health and Human Services. Palantir is about as controversial as a data-mining company can get: founded with money from the CIA’s venture-capital arm, it provides services for arms manufacturers, defence departments and counterterrorism operations, was behind the Los Angeles Police Department’s attempt to implement “predictive policing” by profiling potential criminals so well that they could be stopped before crimes were committed, and extended the capacity of US Immigration and Customs Enforcement to carry out deportations. For Palantir’s opponents, the cherry on the cake is that its founder, Peter Thiel, is Donald Trump’s most prominent Silicon Valley supporter.

At the core of Palantir’s value proposition is that it will put together vast amounts of disparate information faster and better than anyone else, a feat that is especially important when faced with disruption, whether from terrorists or viruses. “Taking control of complex systems” is identified by Palantir as the key task in the face of the Covid-19 pandemic: “leaders must roll up their sleeves, demand the information required to build a common operating picture, and take back control of the decisions.” And, needless to say, Palantir can help: “this is a problem that can be addressed by smart deployment of technology to augment and support institutional decision makers and the critical analysis they need to carry out to make sound decisions.”

This narrative of taking control faces a counter view that sees control as a dangerous fantasy. Andy Stirling of Britain’s Social, Technological and Environmental Pathways to Sustainability Centre makes the case strongly:

There is of course no shortage of apparently effective instruments available to seemingly controlling “cockpits”: dispassionately assured experts; precise scientific metrics; rigorous technical models; massive hierarchical agencies; apparently all-seeing monitoring; seductively informative graphics; compellingly captivating dashboards; reassuringly evidence-based plans; commanding policy levers; invisibly nudging techniques; formidable military capacities; all presided over by our “natural leaders” in the same old “seats of power.” But in reality, what the pandemic already seems to show is not only that there is no pilot… but that the “cockpit” itself has been built largely in our imaginations.

Underlying this view is an ecological model of complex adaptive systems. Here, systems are just as much a focus as in the control model, but much less faith is placed in finding the levers of control that can adjust system properties while avoiding unintended consequences.

Universally adopted apps are just the latest version of an all-seeing panopticon as an instrument of control. But, as Michel Foucault proposed, the disciplinary power of Jeremy Bentham’s panopticon — the prison design that has all the prisoners’ cells in a circle facing the central watchtower — was not that it enabled each prisoner’s behaviour to be corrected through direct observation but that it was the mere possibility of being observed that led prisoners to correct themselves. This transition from external control to self-government became the prominent theme of Foucault’s later work on the operation of power in advanced liberal societies.

Looking at the reports of police-issued fines for breaches of lockdown laws in Australia and elsewhere, you might think that external control is far more important than self-government. But the eruption of civil disobedience in some countries suggests that the power of policing to impose authority from outside is limited in its scope and duration.

It is now dawning on citizens in many places that social regulation in the face of the pandemic will continue not just for days or weeks, but for months to come. Even under the most optimistic scenarios of control and near elimination in a few countries like Australia and New Zealand, the smallest outbreaks will need to be detected, the immediate vicinity quarantined, contacts traced, tests made widely, and the arrival of foreigners strictly controlled. These social technologies will need a high degree of popular support, and the negative impacts of distancing will need to be counteracted by increased, and very local, solidarity.

Most crucial will be the need to counter the tendency to “othering,” or locating the threat in those who are different. This is a story we know well from AIDS: I remember seeing an interview with a drug user imprisoned in Russia — a country whose refusal to adopt harm-reduction policies drove the major and still-growing HIV epidemic there — explaining that the saving grace was that they didn’t have HIV in his block, unlike the block over there, he added, gesturing across the footpath. Enacting imaginary boundaries is both futile and counterproductive in an epidemic.

Elsewhere, a magisterial review of the social and behavioural science literature on Covid-19 responses, initiated by New York University’s Jay Van Bavel, is available as a preprint version. In themselves, the 255 articles it covers would constitute a fine curriculum for a course on social responses to emerging diseases. Given the first version of the article was pulled together in a week, the fact that all but two of the fifty-plus authors are from rich English-speaking countries is excusable: its amplification to a wider range of global voices is surely on the agenda.

Among its key take-home messages is that the creation of shared social norms is critical in changing social conduct. The indirect effect — my view of what I think my neighbour is doing — may be more important than anything else. The authors show the vital importance of “dyadic, synchronous” connection — in other words, communicating in real time with real friends one-to-one, whether in person or on a device, is vastly more important than message posting.

They also suggest that it may be possible to inoculate against fake news by seeding false stories and using them to generate understanding about the ways misinformation circulates. But, perhaps most crucially for Australia at this time, they suggest that it may be maladaptive for countries to promote their successes compared with other countries. This type of “collective narcissism”

is associated with a greater focus on defending the image of the country, rather than on caring for its citizens. It is also correlated with seeing out-groups as a threat and blaming them for in-group misfortunes. To increase a willingness to take a pandemic seriously and engage with other nations to defeat it, citizens and leaders may need to accept that their country is at risk, just like others, and find ways to share resources and expertise across national boundaries.

That message was amplified across the globe last weekend in the mammoth “one world together at home” concert in support of the World Health Organization’s efforts against the pandemic. Assembled by former Young Australian of the Year Hugh Evans, co-founder of Global Citizen, together with Lady Gaga and her mum, this unique streaming concert brought together just about every musical big name.

Its parallel in the world of policymaking was the launch of the ACT Accelerator, a global collaboration to advance the development of Covid-19 tools and therapeutics and ensure their availability to all.

As the paradigm shifts, we can see the links between local acts of mutual support, the coordination of national activity while avoiding the hubris of total control, and effective mechanisms of global solidarity. This is where we need to invest our energies. •