Parliament’s citizenship register is packed with declarations. Not all of them are terribly illuminating, but that’s not necessarily the fault of the MPs 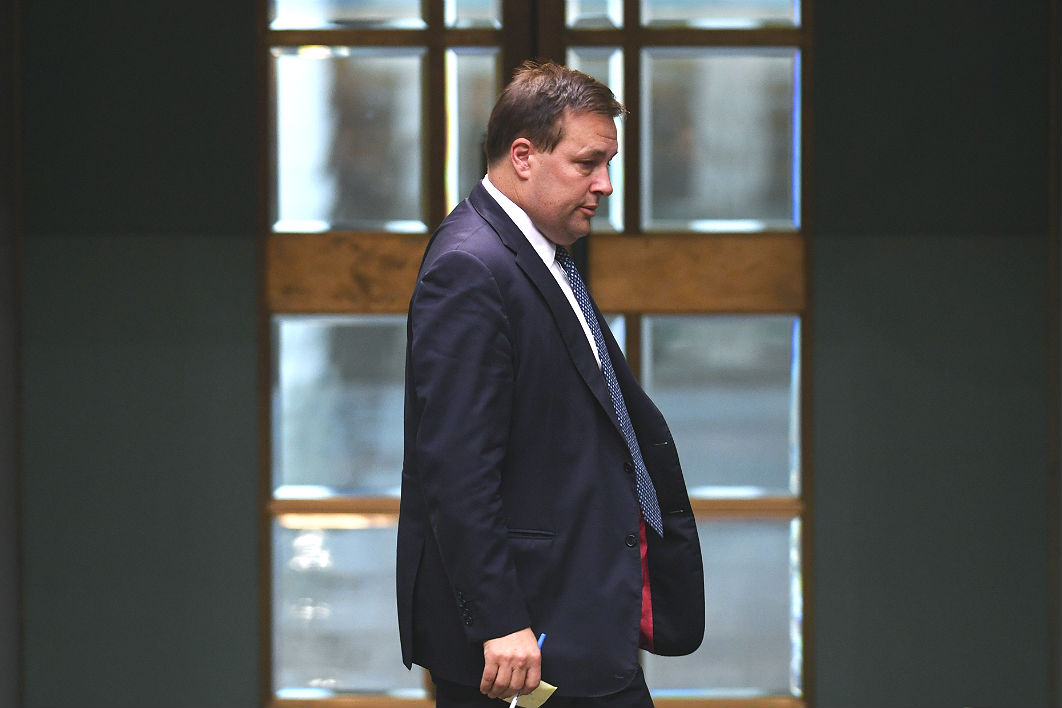 On Thursday 27 July this year — the day Australia’s citizenship crisis reached its first government target, Senator Matt Canavan — Greens leader Richard Di Natale revealed that he had written to the president of the Senate and the speaker of the House asking them to audit the eligibility of every federal MP. The Facebook page of Reclaim Australia was incredulous: “I NEVER THOUGHT THE DAY WOULD COME THAT WE WOULD AGREE WITH THE GREENS!!” These very strange bedfellows were soon joined by other crossbenchers, various journalists and Professor George Williams. The major parties demurred as long as they could.

Four months later, the parliamentary website now boasts nearly 2000 pages of paperwork from all the MPs who survived (and some who were given seats by) the ensuing crisis, other than rookie parliamentarian Barnaby Joyce. Just as all of them swore to their eligibility when they nominated, all have ticked “no” to the question: “Are you now a citizen of any other country than Australia?” Two have already been referred to the Court of Disputed Returns. Dozens more wait nervously. The one member who can relax is Canavan, the lone sitting MP to survive a court challenge.

It would take a PhD thesis to fully explore Jason Falinski’s current citizenship.

Here’s how to read the paperwork. Only two parts of each MP’s register are worth looking at. The first is the second page, where each MP lists the birthplaces of herself and her parents, grandparents and spouse. If all eight of those places are in Australia, then the MP is probably in the clear. But the register doesn’t seek other information that could possibly affect citizenship, such as the birthplaces of previous spouses, spouses’ ancestors and MPs’ great-grandparents, as well as anything anyone did after being born that might have landed him or her with a foreign nationality. (The register also asks nothing about other constitutional disqualifiers: adherence, criminality, bankruptcy, employment and finances.)

Several birthplace lists provide for more sober reading. Ten MPs report that they don’t know the birthplaces of one or more of their parents or grandparents. Anthony Albanese, for instance, has left his entire paternal side blank (seemingly omitting a much more complex story). In at least some cases, the holes in the record are distressing, notably for Indigenous MPs, for whom the audit meant capricious unearthing of their family histories. What adds salt to that wound is the fact that the gaps can generate suspicions of an unconstitutional “split allegiance” with a foreign country. Indigenous accounts make me wonder whether Di Natale consulted with any of Australia’s minority communities before he demanded a citizenship audit. Others facing similar difficulties include the adopted, the abandoned and many refugees, past and contemporary.

Particular page-twos are simply fascinating, such as that of Western Australia’s Nola Marino, who has an Italian spouse, an American father, two Italian grandparents and one Swedish one. Her register includes the latter’s 1914 certificate naturalising him as British, which reveals that he emigrated to Australia aged eleven without either of his parents (who lived their entire lives in Sweden). The certificate also reveals that Marino’s mother was born just one year before her grandfather lost his Swedish citizenship. This example shows why the only other important part of the register is the end, where members can include documents supporting their claims. Those documents need to be read carefully, both for what they contain and for what they don’t.

As for the rest of the register, the part where MPs provide narrative accounts of their own citizenship research: just ignore it. Marino’s register includes her claims that she has been “assured” that she is not an Italian citizen by marriage, that her understanding of the High Court’s ruling on Canavan is that she is not an Italian by descent and that the internet informs her she is not an American. These assertions have no more relevance than ex-Senator Malcolm Roberts’s infamous “I choose to believe.” The sole other document Marino provides is a letter from the Italian embassy, asserting (without explanation) that she isn’t Italian (that is, as far as the embassy knows). She has lodged no documentation at all about her American father or her marriage, and asserts privilege over the legal advice she cites. Unsurprisingly, she is one of four government MPs whom Labor and the crossbenchers have since sought to refer to the High Court.

The audit has unearthed many important citizenship-related documents, some seemingly settling doubts about some MPs’ citizenship, others confirming or revealing them. The latter show how multiple MPs were possibly ineligible to sit in previous parliaments, and that some — such as Labor’s Katy Gallagher, now referred to the Court of Disputed Returns — may be ineligible for this one. These cases reveal a key flaw in Labor’s (otherwise superior) vetting process, as detailed in David Feeney’s register, which includes a four-page note from the Kevin07 “legal unit” advising him to renounce his possible British and Irish citizenships. Feeney’s register dramatically lacks any other evidence that he sent in the paperwork, much less received positive responses from either British Isle, and he, too, has been referred to the High Court.

In a radio interview after Larissa Waters’s resignation in July, new MP Anne Aly claimed that Labor now does things differently: “The party was very much about following up and ensuring that I did take all the measures that were necessary. They were continuously in contact with me.” Nevertheless, while her register has a letter from Egypt confirming that she lodged her paperwork, it lacks any documents confirming when (or even whether) she successfully renounced.

More importantly, the audit highlights the impossible situation the Constitution creates for many Australians. As I outlined in an earlier article, the details of some Australians’ foreign citizenships, including my own, simply cannot be documented at all, either to prove or to disprove them. Bronwyn Bishop’s successor in the safe seat of Mackellar, Jason Falinski, has my problem: a parent born in the heart of the second world war. Falinski’s grandparents fled their birth towns, one surviving the Nazi invasion of Krakow and the other the siege of Leningrad. After his grandfather’s stint in the Red Army, the pair met near the border of Kazakhstan and Kyrgyzstan. Falinski’s father was born in 1943 in Tokmok, a town of 50,000 that was later the childhood home of the Boston Marathon bombers.

Or so Falinski now believes — he has only his father’s (and, for the most crucial events, only his grandparents’) say-so for any of this. All we know for sure is that the three emigrated to Australia from Russia in 1958 when his father was fifteen, and that Falinski himself was born in Manly twelve years later. Falinski’s register omits his father’s immigration record, including its nomination of the trio as Polish. That’s fair enough in my view, as such documents merely record what individuals said in the past about their citizenship, claims that can be made for many reasons. If they exist at all, the only useful documents on Falinski’s past are likely to be buried in a basement somewhere in the former Soviet Union.

Falinski’s other problem is negotiating the citizenship laws of three different non-English-speaking countries — Krygyzstan, Poland and Russia — including relevant laws over the past century. The past laws are especially daunting, as none of these countries existed continuously throughout that period, and each has experienced multiple conquests, revolutions and political transformations. It would take a PhD thesis to fully explore Falinski’s current citizenship.

In legal advice Falinski belatedly added to his register, Melbourne law firm Arnold Bloch Leibler offered a heavily caveated argument for eligibility, relying on factual minutiae such as Falinski’s grandfather’s Red Army service, his father’s illegitimacy and the renunciation of other nations’ citizenship that was part of Australia’s citizenship oath in the 1960s. It also largely ignores more recent liberalisation of each country’s citizenship laws, simply noting that Falinski should “seek independent legal advice from foreign experts.”

Cases like Falinski’s illustrate the utter foolishness of those who dismiss the current citizenship crisis as arising merely from politicians’ lack of due diligence (a view stated by the current High Court) or as a problem that only affects Australians of British descent. The most useful outcome of the audit would be to put an end to the current shortsighted partisanship that is blocking urgent constitutional reform. To date, the lone sign of internal political dissent has come from Labor’s Michael Danby, who has publicly clashed with his shadow attorney-general on the question of whether the Liberal’s Josh Frydenberg should be referred.

Frydenberg’s register lacks any documentation at all about his possible citizenship through his mother born in 1943 Budapest, as well as through his Polish-born paternal grandparents. Speaking to the Australian Jewish News, Danby cited “political, historical and ethical issues” for why “Josh Frydenberg’s mother’s statelessness should not be raised as part of the citizenship debate.” When Labor and crossbenchers recently voted to refer a slate of Labor and Liberal MPs to the Court of Disputed Returns, Falinski — whose grandparents fled both the Nazis and the Communists — was on the list, while Frydenberg wasn’t. •