The World Cup is over, but it left a tentatively flag-waving Germany divided and unsettled, writes Daniel Nethery in Berlin 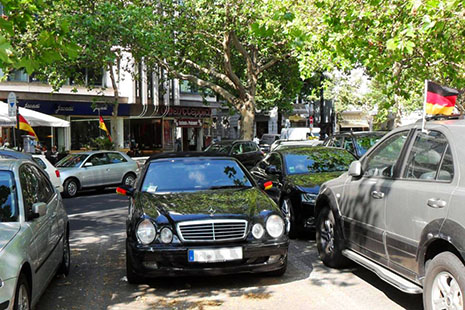 GERMANY, after a long and bitterly cold winter, has been in the midst of a heatwave and a World Cup–induced frenzy. Think Sydney during the Olympic Games. The term “public viewing” has passed into the German language, and there have been public viewings everywhere: an estimated 350,000 fans flocked to the Brandenburg Gate in Berlin to see Germany play Spain. And away from the official FIFA sites, almost every cafe, bar and restaurant had a television showing the match. I even saw newspaper vendors who had attached portable screens to the lamp post next to which they happened to have set up shop for the day.

The German flag was also everywhere. It seemed that every second car on the streets of Berlin had at least one, if not four, five or six, little German flags stuck to the roof or the back windscreen. Some cars displayed the flag on their side mirrors using specially made covers. There were flags flying out the front of shops, and from rooftops and balconies. To a tourist like me, the flood of flags seemed perhaps a little bit over the top, but otherwise nothing too unusual. For the Germans, however, the story was not so simple.

The display of the German flag during the World Cup is something of a phenomenon in a country where flying the national flag has long been a taboo. This taboo, a reflection of postwar disquiet about symbols of patriotism, was shattered when Germany hosted the World Cup in 2006. While there had been incidents of soccer fans waving the national flag before – when Germany won the World Cup in 1990, for example – 2006 was a watershed as far as displays of patriotism were concerned.

This is not to say that flying the German flag, even during the World Cup, has come to be considered normal by all Germans. Some commentators have questioned whether this “party patriotism” is as innocent as its festive name suggests. For many, the unease provoked by the sight of the German flag remains. A friend of mine told me how, just days before the World Cup began, she was offered a free German flag at the checkout in a sports store. “I just couldn’t accept it,” she said, even though she has no problems with other people waving the flag around.

This unease may seem paradoxical given that the flag is generally associated with a democratic Germany. According to Sven Ismer, a research associate at the Berlin Free University, this is true even for those from former East Germany where the flag was essentially the same (a coat of arms in the middle being the only difference). “A very large number of East Germans would say that East Germany was a democracy too. At the heart of East German identity was the anti-fascist state, the antithesis of the Nazi regime.” So it is the patriotic display of the flag, rather than what the flag represents, that was for decades so offensive.

Ismer is studying the change in attitudes towards the display of patriotism during the 2006 World Cup. “They changed a lot,” he says. “Before, it was a social norm to display a certain critical distance towards the nation, and of course the reason for this was the shame about what had happened during the war.” Statements like “I am proud to be German” were only heard from the far right. As far as most people were concerned, the notions of patriotism and nationalism were inseparable.

Several studies tried to analyse whether the party patriotism of 2006 led to a rise in nationalist sentiment, but according to Ismer the results were contradictory. Some studies suggested that racist attitudes declined sharply; others concluded that patriotic displays and discussions around national identity inevitably led to a sharper distinction between “us” and “them."

That said, waving the national flag around has made it possible for Germany’s minority populations to make visible their support for their country. The story of a Lebanese-born migrant who hung a huge German flag above his shop in Berlin, only for it to be torn down by left-wing protesters, received international media attention. And the Germans seem to reserve their unease about flag waving for the German flag alone. Ismer relates how in the 2008 European Cup, Germany met Turkey in the semi-final. The German Turkish community, which in large part had backed the Turkish team throughout the tournament, had no intention of making an exception for this particular match. Yet the sight of Turkish flags on the streets passed as if unnoticed. Moreover, when the Turkish team lost the match, and these same fans were as vigorous in their support for Germany in the final, this was favourably mentioned in the media.

Still, there is a lot of concern about what all this party patriotism could lead to, and Ismer is wary of how nationalist sentiment can be shaped, rapidly, in such heady situations. “There is nothing else in life which allows people to experience such strong emotions,” he explains. He gives the example of career success, where your pride in this success is regulated by your peers – who will eventually tell you to stop big-noting yourself. “But if the national football team wins and you experience pride as part of a group, there is nothing to limit your emotional response to this success.” And these positive feelings could make people more receptive to new ideas about the nation and national identity.

For now, though, the World Cup is over. Almost all of the flags have been taken down, and my friend is spared the angst of deciding whether to accept a German flag offered free with her purchases at the sports shop. For another four years, at least. •

Daniel Nethery is translating a biography of Frantz Fanon. 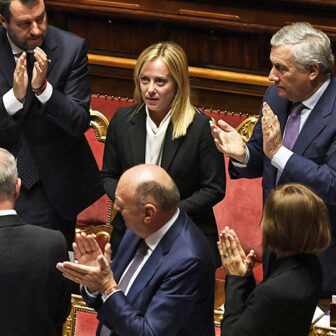