Past meets present in a Berlin refugee camp 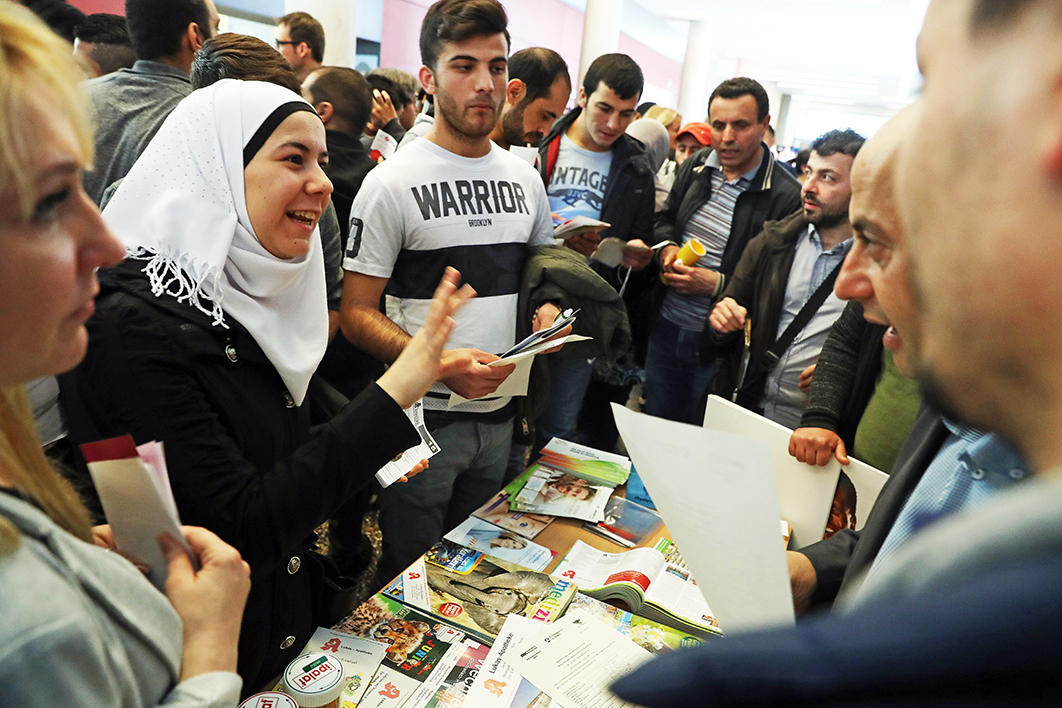 In a quiet, leafy Berlin suburb known as Little Switzerland, I am walking around a refugee camp with Adnan, a Syrian Arab Red Crescent aid worker, and Aliya, a doctor from Iraq. Neither is a refugee; they are visiting Germany as guests of the government, and I quiz them about their lives back home.

“It’s amazing,” reflects Adnan, drawing deeply on a cigarette. “Everyone goes to the town centre and smokes and drinks coffee until four in the morning. Aleppo has basically returned to normal — except for the buildings, that is.” He adds the qualification with a grimace.

“You know,” says Aliya, “my family thought about emigrating to Canada because of the conflict but decided against it. Alone, without our family, friends or our city, we would die silently from within.” Her words echo the sentiments of another Iraqi, whose background is Jewish. “My parents still live in Iraq,” she had told me. “It’s tough, but they can’t bear to leave. Each year during the invasion when they were forced out of the country, we would have a reunion, drink a toast, and say ‘next year in Baghdad,’” turning the traditional Passover toast on its head.

Adnan, Aliya and I survey the neat line of prefabricated houses with small gardens and children’s play equipment, which have been erected to house refugees in this prosperous Berlin suburb. “In Syria, this would be impossible,” says Adnan. “The government wouldn’t allow it. For refugees there is only terror and tents, if that, and mud.”

This camp accommodates around 600 of the nearly 1.2 million refugees Germany has received since the onslaught on opposition strongholds by Syria’s Assad regime and the ongoing turmoil in Iraq. If the boxy white houses are somewhat uniform, they are at least clean, comfortable and well insulated. Each has its own cooking facilities and access to a common playground, a colourful nursery for infants, and a homework room packed with beanbags, pictures and games for older children.

Communal cooking facilities allow for socialising within the camp and for inviting German neighbours and local residents to meet refugees and asylum seekers not only from Syria and Iraq but also from Afghanistan, parts of Central Asia, Mali and Chad.

“We were very worried when the Berlin government gave us this land,” says the camp manager, a young German man with a degree in history and politics. “It is in a very conservative area that voted for the right-wing nationalist Alternative für Deutschland party at the last elections. But surprisingly there haven’t been any complaints. I went to a local residents’ meeting recently and heard that people were surprised, with all the refugees in Germany, how nothing much had changed. Some of them have even started visiting us here and giving extra German-language lessons as volunteers.”

Apart from a few mothers doing some washing, having German lessons or minding toddlers, the camp is largely empty. I ask where everyone is. “All the children are in local schools,” I am told, “and many of the men and woman have jobs.” Despite the fact that the area is fenced off and there’s an attendant at the gate, this is no prison. People can come and go, friends can visit, and it is legal to earn an income outside the camp.

The care, commitment and consideration of the young camp manager — who had bent rules and massaged budgets in order to build a stable sense of community and engagement with locals — also suggests a deeper resolve. “They still feel it, even now and even this generation,” a French aid worker now living in Berlin had told me earlier. “In progressive Berlin, the German past casts a long shadow.”

As if hearing this comment, the manager looks up at the ornate and grandly oppressive brick building, with its columns and triumphal archways, in whose grounds the refugees now live. “This used to be the headquarters of the imperial army under the Kaisers,” he says. “Then it belonged to the general staff during the Third Reich and housed an SS unit. I like the fact that this building, with this past, is now a place to welcome refugees.”

Yet the commitment to a more humane way of managing complex problems goes further than an appreciation for historical irony. In what Australians might see as a moment of jaw-dropping enlightenment, the German Institute for Foreign Affairs in Bonn funded the camp manager to go to Iraq to assist with the humanitarian response to the Mosul offensive. This was in order, as the camp manager says in flawless, accentless English, “to develop empathy and to understand better the context from which many of our refugees come.”

He spent three months managing refugee camps in Northern Iraq, and that was followed up with a visit to Berlin by the Iraqi doctor to assist in developing cross-cultural understanding in the camp and with the wider community. “It amazes them when I say I’ve been there,” he says, “and helps with social cohesion here.”

Not that the camp is a paradise. Refugees sharing accommodation at close quarters don’t always get on, and not everyone has a job in vibrant but economically straitened Berlin. For those who do, the work is often informal and at times illegal. Many are still traumatised from the experience of war and forced migration, and some struggle to adapt to a new country and to learn its language. There are only two social workers in the camp, and they manage everything from supporting psychologically damaged parents and children to guiding refugees through the complexities of the German welfare system. Some refugees have been referred to the police for involvement in criminal activities, and there have been child protection concerns.

With growing anti-immigrant sentiment and consequent budget cuts, the camp has funding for only another six months. More refugees are being deported to Afghanistan and other places now deemed safe, and there are demands to close the facility. Meanwhile, the pressure for “integration” has intensified since the time when Germans lined the streets outside train stations and applauded newly arrived refugees fleeing conflict, and a local football team, Hertha Berlin, flew flags at its matches saying “Refugees Welcome.”

“For some, integration means not speaking Arabic, wearing headdress or being Muslim,” says the camp manager. “But for us, we just try to teach people enough German to get by and to have an understanding of how things work here.”

Acknowledging a perceived political reality that a more open policy doesn’t have wide popular support, Robert Manne and others have argued for what he sees as a more pragmatic but still sympathetic approach to refugees in Australia. But although there are signs of a gradual shift in public opinion, it seems unlikely that the major parties will significantly relax their policies. At the very least, the German example shows that for those currently incarcerated, a simple, humane and much cheaper alternative is within reach.

As I checked into my Berlin hotel, the receptionist takes a look at my passport. “Australia,” she observes, and I brace myself for the usual conversation about hot weather and kangaroos. But she continues: “If we treated refugees like you do, they’d call us Nazis.”

There are certainly deeply concerning echoes in Australia’s treatment of refugees — which is also linked to the lingering influence of the frontier wars and the White Australia policy. But if the past can be a prison, it can also suggest alternatives. Many who are anxious about refugees and their impact on Australia might be surprised — like their conservative German counterparts — when “nothing much” about their daily lives changes. •

Tom Bamforth is an Australian aid worker whose writing has appeared in the Age, Granta and Griffith Review. He is the author of Deep Field: Dispatches from the Frontlines of Aid Relief (Hardie Grant 2014).