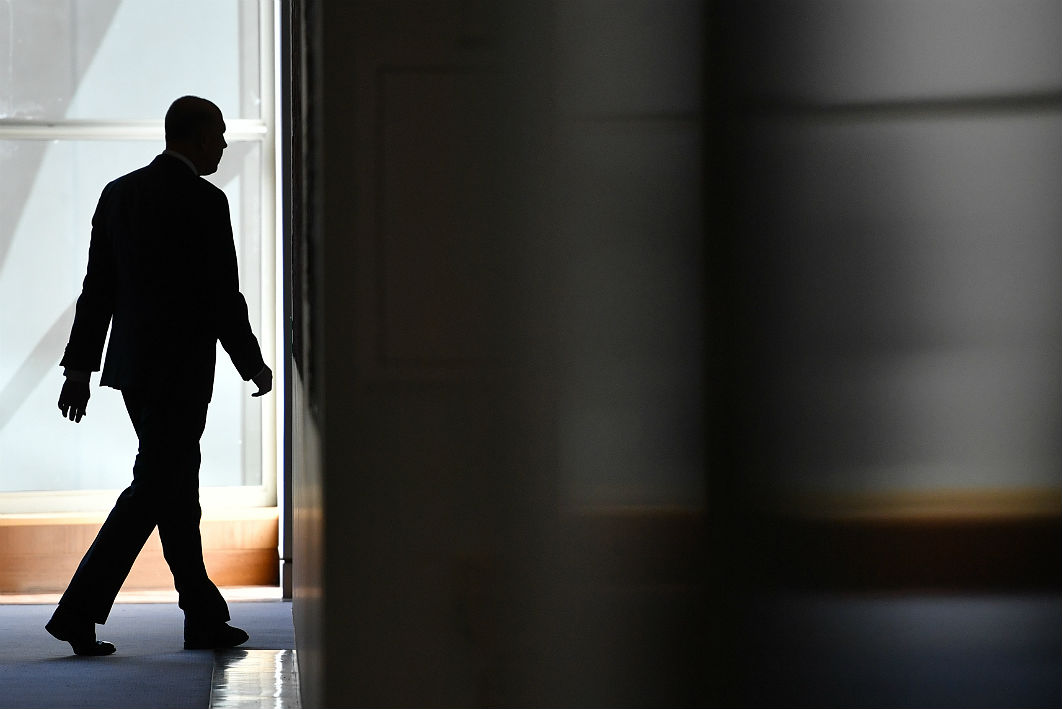 Most Australians would see home affairs minister Peter Dutton as a tough and politically incorrect politician — proudly so — tolerating no nonsense from do-gooders and bleeding hearts. He doesn’t take a backward step; his often bellicose pronouncements about asylum seekers and migrants delight fans and incense opponents.

Dutton has run the government side of the latest News Corp–Coalition tag-team outrage campaign — the one about Melbourne’s “African crime wave.” He is, perhaps, the worthiest of today’s crop to assume the mantle of the legendary John Howard.

Yet when voters are asked in surveys who they think should lead the Liberal Party and hence be prime minister, the contest is between Malcolm Turnbull and foreign minister Julie Bishop, who each have around 30 per cent support. At around 5 per cent, Dutton barely registers. (His predecessor as immigration minister, treasurer Scott Morrison, attracts about the same level of support; Tony Abbott sits in the low teens.)

What’s going on? Isn’t migrant-bashing popular in voterland anymore? At a time when Australians find inspiration in so few politicians, shouldn’t the tell-it-like-it-is home affairs minister be riding a wave of adulation?

Australian politics is not in a healthy place. Donald Trump aside, it is difficult to think of national leaders and senior government members of other comparable democracies who regularly debase themselves, and their country, as ours do with these campaigns against minorities. Turnbull, once proudly above all this, is now so enfeebled he feels obliged to join in.

Political commentators mostly agree that it all makes good politics — but does it? Is it all it’s cracked up to be?

Dutton is certainly popular, phenomenally, among a tiny section of society — the self-appointed “base” and conscience of the Liberal Party. The Sky-News-after-dark cohort: foaming at the mouth, ideologically fanatical, they demand the Coalition prosecutes culture war after culture war, on immigration, climate change and Islam.

Quite a few of the larger Liberal movement, including MPs, reside in this group. Crucially, they project their obsessions onto the general population and insist this is where the smart politics is. It is them, more than the public, that Dutton and the ever-shrinking Malcolm largely aim to impress. Superficially it’s about retail politics, but deep down the motivation is internal legitimacy.

How did Australian politics arrive at this position? The answer consists of two words: John Howard. You can argue over his government’s accomplishments — good and bad — but when it comes to damaging, divisive rhetoric it set new standards for what is acceptable and, more importantly, what is believed to “work.”

The assumed potency of the politics, particularly regarding asylum seekers, has in turn polluted the policy — see, for example, what seems to be the deliberate inflicting of unnecessary misery on offshore detainees.

We got here via a series of events through which norms were established. It wasn’t always like this.

In 1988, opposition leader Howard attempted to generate a populist wave by suggesting Asian immigration be slowed. The notion was extremely popular in the electorate — Newspoll found more than three-quarters in favour — but the Hawke Labor government, not yet blessed with today’s generation of highly skilled, science-based apparatchiks, declined to capitulate. When Howard lost the leadership the following year, that ugly foray was roundly seen as a contributing factor.

In the profession of politics, lessons are learnt and codes of acceptable behaviour established, and when Howard returned to the leadership in 1995 he felt obliged to repudiate those youthful indiscretions. For the first half of his prime ministership his occasional tendency towards racially tinged politics — his inability to publicly disagree with Pauline Hanson’s assertions about Indigenous Australians and Asians, for example — was largely seen as an unfortunate indulgence, a little embarrassing.

But then came the 2001 election, and his and immigration minister Philip Ruddock’s astonishingly (by the standards of that time) inflammatory rhetoric (“I don’t want people of that type coming into this country,” the prime minister fumed at the height of “children overboard”) — followed, most importantly, by the election outcome. The strategy, roundly criticised before election day, was perceived to have prevailed: winners are grinners and Howard and his brand of politics were now seen as unassailable. That which had been no-go became mainstream.

None imbibed these lessons more enthusiastically than the Labor Party: nine years later, for example, after the Abbott-led opposition had promised to decrease immigration levels, the Gillard government validated Abbott’s strategy by declaring they would lower them even more. Hawke’s example was forgotten.

Sure, we should be able to discuss the best way to deter unauthorised maritime arrivals. Integration of migrants and refugees shouldn’t be out of conversational bounds. But when national leaders indulge in abusive campaigns against ethnic groups, they are setting a damaging example.

Is there a way out of this nasty place we find ourselves in? I believe the solution lies in taking away the political motivation. The electoral politics of minority-bashing has never been as potent as it was or is cracked up to be; it’s an issue that can generate high levels of public emotion without being a net vote-winner. Howard would have won in 2001, by about the same amount, had the Tampa never arrived and asylum seekers not become a central election issue.

Labor is extremely likely to win the next federal election, regardless of who is leading the Coalition (or, to a point, who is leading Labor), irrespective of tactics the Coalition adopts. If the Howard lessons are to be unlearned, the best scenario for the country, and indeed the Liberal Party, would be for Peter Dutton to be prime minister when this government meets its maker. If not Dutton, then Morrison will do, or even Abbott. Give the fanatical Coalition base what they demand, adopt the strategy of Andrew Bolt, Ray Hadley and Alan Jones, and let them go down with all guns blazing.

Then after the landslide result, as the Coalition forlornly picks up the pieces, the lessons of defeat will be learnt.

Australian voters aren’t necessarily nastier than their counterparts elsewhere; the grotesquery has been in our political class. Yet, as Howard learned three decades ago, race-baiting is not a winning electoral strategy. ●