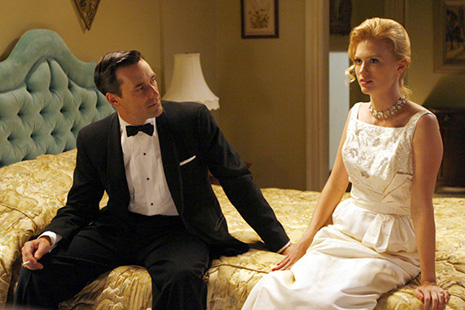 IF I WAS A MAN in possession of a time capsule that could transport me back to 1960, I know what persona I would adopt when I arrived: I would be detached, charming, disarming and – most of all – cynical. To intelligent women I would say things like: “What you call love was invented by guys like me to sell Nylons.” Then I would order another Martini and ask the black waiter about his life just because no one else will for another decade or so. I’d direct my cynicism at the postwar domestic idyll, but also at the beatniks who believed just as naively in its opposite.

The protagonist of Mad Men, Don Draper (Jon Hamm), isn’t a time-traveller but he is a man ahead of his time, created with a twenty-first century viewpoint. He shows us both how far we have come in five decades and how far we haven’t.

“Mad Men” is a term coined by the advertising executives and copywriters of Madison Avenue to describe themselves. The men revolve around Draper, the dazzling and aloof creative director of the boutique Sterling Cooper agency. He fits the 60s television ideal: tall, handsome, with a wife and kids kept at arm’s length from Manhattan. The art direction and costume work is so precise that you feel as though you could be watching a re-run (the chip’n’dip plate deserves an Emmy all of its own). But unlike original 60s television, Draper is constantly pushing the boundaries of his world, dabbling in fringe culture, manipulating his boss and hiding his own shameful past. He is non-committal when it comes to the life he is paid to promote – the perfect wife, home, appliances and corporate identity. And yet the creative inspiration he finds in his work is ultimately the only liberation from this dark and confining world.

Where most dramas use work as a background upon which a family saga plays out (The Sopranos), in Mad Men it is work that really matters. Advertising, if you are on the production end, is transcendent; it is the key to American culture, the articulation of a nation’s fears and desires. Although we are sucked in by the show’s brutal display of 1950s gender roles and consumption habits, Mad Men is undoubtedly about America and the creative industry that built it.

America comes at us through Sterling Cooper’s clientele: Kodak slide projectors, Clearasil, deodorant-in-a-can, steel, weight-loss vibrators, Nixon. Of course, we know these products are not what they claim to be, that the buildings of steel will melt in 911, the deodorant will shoot hydrocarbons into the atmosphere, kids will grow obese, cigarettes will kill, and Nixon will tape-record himself committing the biggest political scandal in US history. Mad Men is impressively well-researched but leaves it up to the audience to make the historical connections.

In the first episode, Lucky Strike’s diseased-looking businessmen – prohibited from advertising cigarettes as health products – are looking for a new idea. Draper, having agonised over the issue, has a last-minute flash of inspiration: the “goodness” of smoking can be sold through good ol’ fashioned harvesting techniques. While everyone else’s cigarettes are poisonous, Lucky Strike’s are promoted as “toasted.” You get the feeling that this is the dawn of a new era in marketing, in a society that is ready to see its own collective psychology – underpinned by the pursuit of happiness – on display.

Psychological therapy of the more traditional kind is also becoming acceptable for ordinary people in the year 1960. Draper’s wife, Betty (January Jones), is an ex-model who is literally losing her grip. She get permission from her husband to see a therapist. Although this appears to be a progressive development we discover that the shrink covertly relays everything she says back to Draper. By the end of the series, in an ultimate expression of loneliness, Betty is encouraging the affections of a nine-year-old boy. Jones plays the role with a kind of vapid, doll-like perfection, but struggles somewhat with her character’s eccentricities and dark side.

The female cast are all full-figured women, squeezed into corset-like undergarments, displaying Picasso-like curves and pointy angles, even through their nightgowns. Joan Holloway (Christina Hendricks), with her red lipstick, red hair and pencil skirts, is outstanding as the woman who likes to appear in control. She is just one aspect of the program’s exploration of sexual liberation; in her case, the man-hunt never seems to yield any real gains. Sexuality of a more domestic nature involves wives, a washing machine, a door-to-door salesman and the infamously “stimulating” weight-loss device.

Even for the women of 1960, creatively satisfying work is the best hope for liberation. Peggy Olson (Elisabeth Moss) is the real leading lady, showing up as Draper’s secretary and edging her way into copywriting. She gets less popular among the junior executives (“Hitler’s Youth”) as her waistline and professional talents grow. But she will not be found crying in the ladies’ room, no matter what (and she gets hit with a whopping big “what” in the final episode).

The show’s most sublime moment is when Kodak come to Sterling Cooper looking for a way to sell their classic slide projector, featuring the revolving mechanical slide wheel. Draper, pitching with perfection, clicks through his own wedding slides, narrating a nostalgic picture of America and family. He renames the product the Kodak Carousel. Kodak brings together nostalgia for an era that has passed, the desire for domestic comfort and suburban bliss. Ultimately, the dream is only fully articulated in the boardroom, in advertisements, in creative work. In reality, it’s too late. •

Ellie Rennie is a research fellow at Swinburne University’s Institute for Social Research.