China is beginning to recognise that a complex economy demands nuanced policies, writes Kerry Brown. But the shift could be rocky 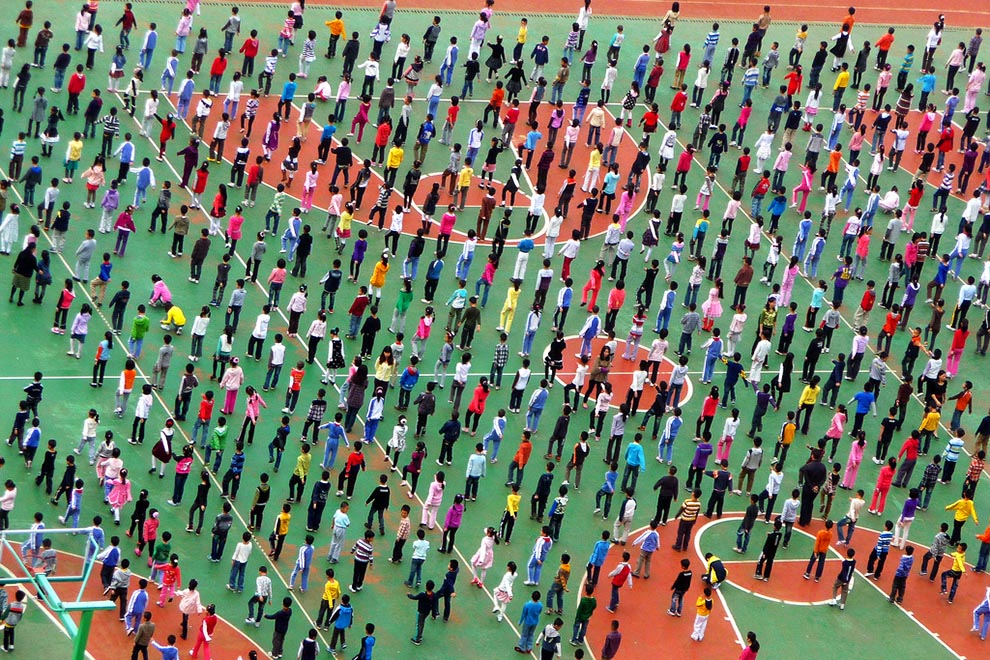 A moment of choice? Morning exercises at the Xixiang middle school in Shenzhen. Chris/Flickr

For all its complexity, one of the greatest paradoxes of contemporary China is that it often chases after very simple things. In the years since 1978, government economic policy has been judged almost wholly by whether or not it achieved solid economic growth (and it always did) as distilled in the single figure of gross domestic product. Current members of the Politburo, like vice-premier Zhang Gaoli, reached the summit of power largely by presiding over provinces where GDP figures were stellar. (In Zhang’s Tianjin, the period up to 2012 was characterised by GDP growth rates in the high teens.)

Unemployment and inflation, meanwhile, let alone more abstract measures of wellbeing, were regarded as of little importance. And when figures like the current vice-minister for the environment, Pan Yue, pointed out that it might take all of the wealth implied by these dazzlingly simple figures to clean up China, he was met with stony silence from those higher up in the government.

Xi Jinping’s government has tried to complicate this oversimplified narrative of development. Partly, this is from necessity. GDP growth will inevitably fall, and has done so slowly over the past few years. Marrying success solely to a single figure is no longer fit for purpose in China. A host of other more nebulous issues need to be considered – a nicer living environment, better quality jobs, the kind of things economists and policy-makers in the West try to wrap up in neat messages that gain public support and acceptance. As China’s leaders are finding, however, this is not an easy thing to do.

Among the other ways this complex society frames its ambitions in very simple terms can be found in the education sector. At the National People’s Congress early last month, premier Li Keqiang promised that greater resources would go into education and into research and development. Education matters critically to the Chinese leadership as they seek to create an economic model based more on services and less on manufacturing. Investment is no longer going to be overwhelmingly directed towards tangible, fixed assets, but towards human capital. China’s 2500-plus universities and its tens of thousands of schools, have never been the target of so much attention and support.

But Chinese leaders face a profound problem in this sector too. Their education system is still overwhelmingly based on exam success. It remains a centralised and very traditional system, one that privileges cognitive over non-cognitive modes of learning. It has been the subject of waves of reform almost since the first years of Communist rule, with attempts to create a more entrepreneurial system dating back to the 1950s. The whole sector was effectively closed down during the Cultural Revolution, from 1966, because it was regarded as conservative and enslaving. Despite the many attempts to moderate the worship of raw exam marks as the sole measure of success, however, the gaokao exam score for individuals remains the basis of China’s educational system.

A lucid exposition of this problem can be found in Yong Zhao’s recent study of the failures of China’s schools and universities, Who’s Afraid of the Big Bad Dragon? (Jossey-Bass, 2014). Zhao’s starting point is the startling phenomenon of American and British politicians lauding Chinese pedagogical methods because of their success in producing good maths and science results. Zhao, himself a product of this system but now based in the United States, is blunt in his rebuttal of this admiration.

Chinese education, he argues, is authoritarian, measures success on the narrowest and most contentious of bases, and even in its own terms is a poor performer. “Only 10 per cent of [China’s] college graduates are deemed employable by multinational businesses,” he writes. Chinese students who come through this system “are good at solving existing problems in predictable ways, but not at coming up with radical new solutions or inventing new problems to solve.” Ironically, Mao Zedong had enlightened views on this issue at least, complaining in 1964 that teaching in China “works against the active and lively development of youth morally, intellectually and physically.” Mao, according to Zhao, was an admirer of the imperialist enemy, the United States, in this respect.

Zhao’s critique is a timely one. China is entering a period in which the non-state sector is increasingly important as a supplier of the innovation and entrepreneurialism the country badly needs during its great upgrading. It is contributing critically to GDP growth, employment and social cohesion. It is even being considered as a potential partner for state companies through mixed ownership structures, as promised in the Third Plenum of late 2013, because it can offer the kinds of creativity the state sector cannot.

But new-generation Chinese entrepreneurs won’t fall from the sky. The right educational culture will be needed to nurture their risk-taking instincts. Everything Zhao writes about shows that China’s educational system is a long way from providing this. It remains utterly fixated on producing excellent passers of standard exams based on a national curriculum. Zhao doesn’t explore this issue in much detail in his book, but underlying all the structural issues he talks about is a very real cultural one. An objective reader of the evidence he presents would have to conclude that China is still a culture in which failure is punished, and in which those who attempt something and don’t do well must carry a high cost. Unlike in the United States, and in particular places like Silicon Valley, where failure is seen as part and parcel of the whole innovative endeavour, in China it remains stigmatised. The net result is the dominance of cautiousness.

This is not to say that there are not bold, dynamic figures in China. But they work within even greater strictures than their counterparts in many other economies. China is a tough place to fail in. The narrow focus of the education system, at least as Zhao describes it, is partly to blame. He describes a vast exam boot camp in the central province of Anhui, with a staggering 11,000 students at any time being led through a cramming system that literally puts their lives on hold for a year in the quest for higher marks to get into the best Chinese universities. The sacrifice is worthwhile if it eventually secures a comfortable job in a state enterprise or in government. But it doesn’t aim to produce entrepreneurial, free-spirited thinkers.

China’s people are no less creative than people anywhere else. Some might even argue that one of the primary goals of its education system is to stifle their instinctive creativity, rather than unleash it. It is in the Chinese government’s interest to produce people who are obedient to authority, argues Zhao, and that is the reason why, despite widespread understanding of the impact of the current system across China, the government has resisted many attempts to reform it. In the past, he says, “the concern for both educational institutions and individuals was not how creative and different they could be, but how well they could please the emperor.” Creativity that did this was rewarded. But there were certainly plenty of other types that were viewed as threats and rejected. Replace “emperor” with “government,” Zhao argues, and this is precisely the system that prevails today.

Chinese leaders certainly talk well about creativity and innovation. But they clearly didn’t like the creativity and innovation demonstrated by the five female activists unceremoniously detained on World Women’s Day in March for protesting about discrimination against women. Nor do they care much for artists like Ai Weiwei, or writers like Liu Xiaobo, who are also, in different ways, creative and innovative.

As the demand for more entrepreneurialism rises, just how far can China go with an education system that remains inhibitive and unfit for producing the sorts of skills the country will increasingly need? Zhao’s book is a good place to start thinking about just how demanding this will be for China and the world as China continues to hunt for square circles, controlling at the same time as it attempts to liberate. At some point, the need for risk-taking, innovative people will be more important than the need for those who are more accepting of authority and willing to work within the intellectual parameters the government sets.

China will then face a moment of immense strategic choice: either stick to the old path, and have increasingly fractious fights with society. Or loosen up, and see a generation grow whose minds will wander without fear or restraint over areas ranging from science and technology right through to politics. This will be an interesting negotiation. The only thing we can be certain about is that it doesn’t promise to be an easy one. •