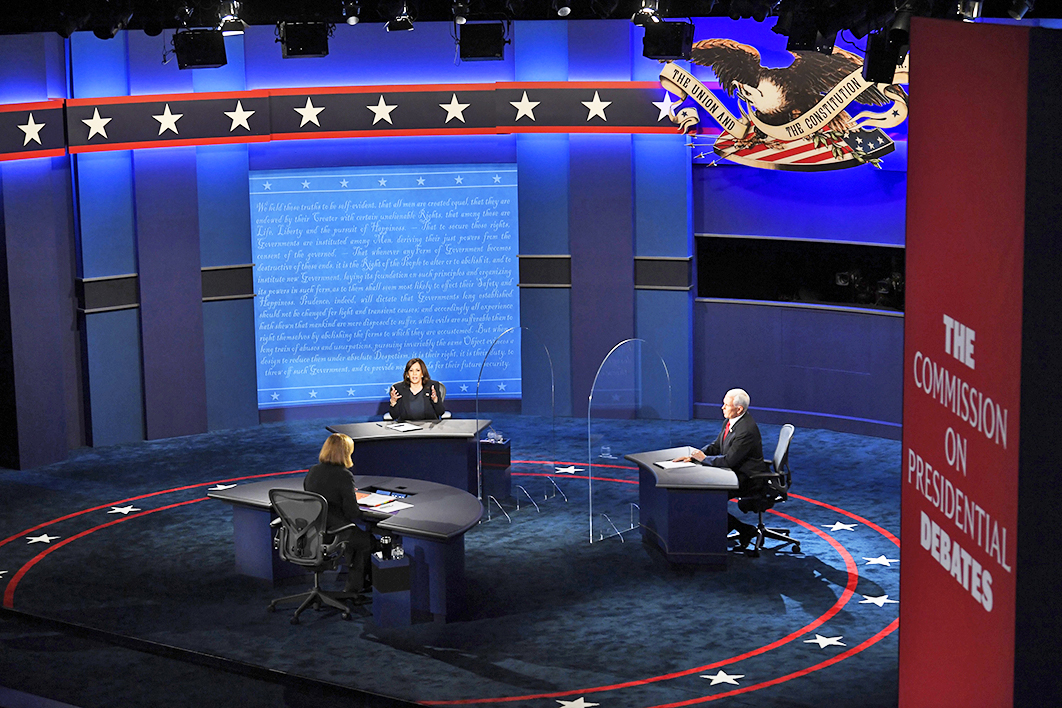 The prevailing wisdom says that vice-presidential debates are merely sideshows to the presidential campaign and the face-to-face encounters between the two presidential candidates. People vote for the first name on the ticket, rarely for the second.

But this was never guaranteed to be the case in 2020. Nothing involving President Donald Trump and politics is subject to prevailing wisdom, and, with this being a contest between the two oldest-ever candidates, the odds that their running mates will have to step up are higher than usual. Add to this the fact that Trump’s unknown Covid-19 prognosis might make this the last debate of the campaign, and the stakes couldn’t be higher.

Vice-president Mike Pence came to the debate with his record as a Trump collaborator and sycophant squarely on the table. He touts his credentials as “a Christian, a conservative, and a Republican, in that order” and he has willingly shored up Trump’s suspect credentials with all those groups.

He has done this ably. Initially the philosophical differences between the two were substantial, but over the past four years Pence has very effectively masked the divisions. Now he is tied to Trump, his policies and his unpopularity; and as a result, as several recent polls show, his favourability rating, a positive in 2016, is under water.

Joe Biden made his choice of running mate based on several key considerations that likely never entered Trump’s mind when he chose Pence. Biden has the experience of serving as vice-president — and as a real partner and source of wise counsel — to Barack Obama, and he clearly wanted to echo that dynamic in his own administration. He also realised the significance of choosing both a woman and a person of colour. And he was not intimidated by someone who is strong and forthright in her own right, a woman who came to today’s debate with positive favourability ratings and a perception that she would emerge the winner.

The central topic was inescapable: as head of the White House coronavirus taskforce, Pence must be held accountable for the many disastrous failings of the Trump administration in dealing with the pandemic. On this question, Pence’s dismal response tried to make a virtue of the Trump administration’s failure to tell the American people the truth about the pandemic at the outset and acknowledge the suffering they have experienced as a consequence.

Pence was always going to be on the back foot on this issue — most obviously because his advisers objected to the use of protective plexiglass screens during the debate, and because Pence himself, who has been in close contact with people known to have tested positive for the coronavirus, should have been in isolation.

But, like Trump, he is more than willing to ignore expert advice and prioritise image over his own and others’ safety. Public health experts have called his participation in the debate after the recent flare-up of cases at the White House, and the presence of his staff members who have also been exposed to the possibility of infection, grossly negligent.

It quickly became apparent that Pence had a single mode of response to the array of questions raised during the debate — questions about the role of a vice-president when the president is disabled in any way, about the economy and tax cuts, about climate change, about China, about the Supreme Court and about racial justice. In each case he evaded the questions in favour of a set of Trump-light talking points riddled with inaccuracies and gaslighting and accompanied by pained expressions. Many of his statements — on issues such as the adequacy of the response to the pandemic, climate change, whether the Trump administration has a healthcare plan, and the push to swear in a new Supreme Court judge — served only to highlight how out of touch he and Trump are with mainstream America.

Harris was much more forthcoming about substantive policy issues. She used her recognised prosecutorial and verbal combat skills to good effect, especially when discussing how Trump’s isolationism has made America less respected and weakened national security, how women’s reproductive rights are under threat, and the implications of Trump’s refusal to condemn white nationalism.

This debate was never going to repeat the nasty argy-bargy of last week’s presidential encounter. Pence is much more focused and controlled than Trump. But he used Trump’s debate playbook anyway, rarely allowing Harris to finish her sentences and consistently disregarding the timeframes set by the moderator. Like Trump, he is a practised and shameless liar.

Many women watching the debate would have sympathised with Harris and known exactly how she felt while a rude, older man stole her time and spoke over her. Her performance was not as sharp as might have been expected, but she showed herself to be capably across the issues, poised in the face of constant interruptions, and willing to push back on outrageous statements.

Did the debaters fulfil their mission? Can either team claim a political victory? The pundits will make their decisions over the next twenty-four hours and the voters’ thoughts will be known with the next round of polling.

Pence’s key task was to reassure jittery Republican voters reeling from several weeks of disastrous news for their ticket. Biden has significant and consistent leads in both national and swing-state polls, and Trump’s Covid-19 diagnosis has taken the momentum out of his already-struggling campaign.

Harris’s job was to walk the fine line of attracting support from both white and minority Americans without coming off as an “angry Black woman,” while simultaneously calling out the racism and sexism of the Trump administration.

In the end, despite predictions that the encounter might change the campaign dynamic, it seems only to have reinforced the fact that the election is a referendum on President Trump, his vice-president and his administration. It did nothing to upset the positions in the race that Biden and Harris currently hold. •