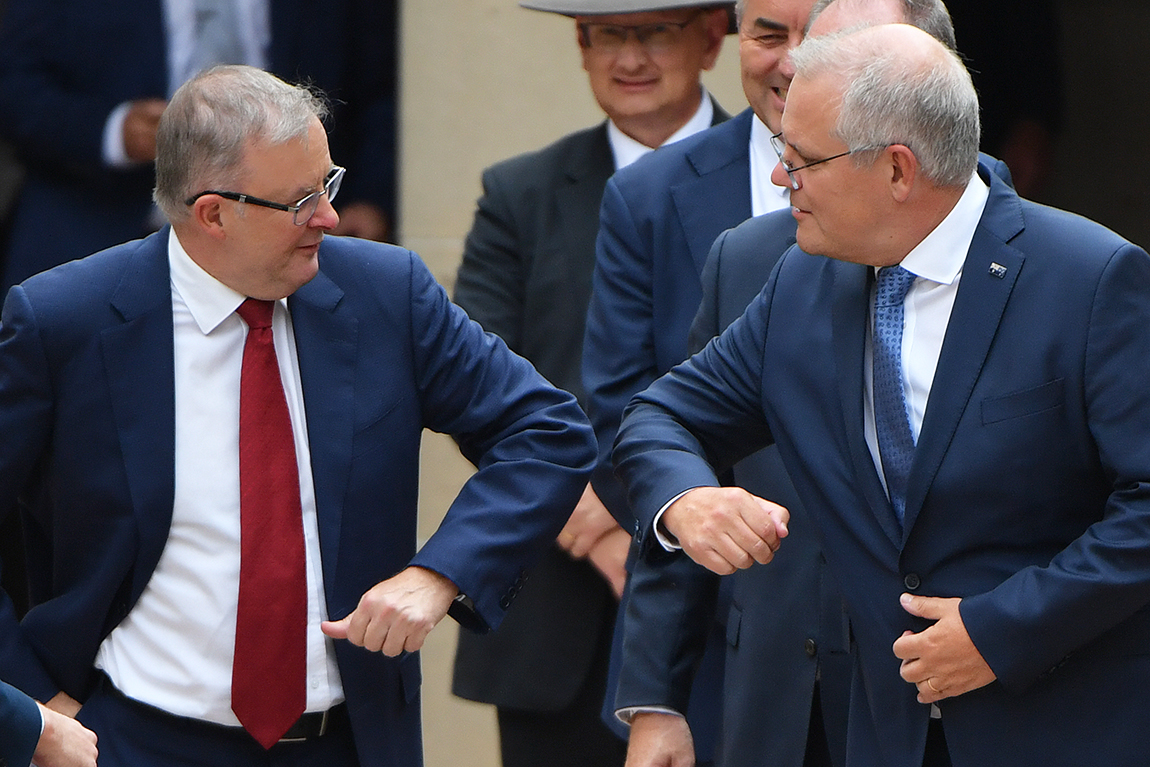 Way back in early 2003, I reprimanded the Australian and Newspoll for publishing only primary voting-intention numbers, not two-party-preferred (except during election campaigns), and drawing often-erroneous conclusions — generally along the lines that the Howard government continued to reign supreme. Any reasonable estimate of likely preference flows during 2002 had Labor not only competitive but also ahead about a third of the time.

Probably even more than now, Newspoll was the pollster the political class most obsessed over.

You can read it in the Financial Review here; it apparently earned a private rebuke for the Fin from the then Oz editor (who is now the Fin’s editor-in-chief). But the very next Newspoll did include two-party-preferred figures, and they have ever since. I like to think I played a part in this positive development for humanity, but Simon Crean’s office — which had been complaining to the Australian for quite a while — might have claimed some credit too.

Unfortunately the subsequent Newspoll preference-allocating strategy left much to be desired, culminating in egg on its face at the 2004 election. More on that here.

The point of this skip down memory lane is that, finally, with total major-party support ever-declining (it hit a postwar low of 74.8 per cent in 2019) and preferences becoming ever more important, all pollsters had climbed on the two-party-preferred wagon.

Until last month. That’s when Nine’s Age and Sydney Morning Herald introduced us to their new Resolve Political Monitor, a monthly dive into not just voting intentions but also a range of other issues. There’s a lot to like about it, including a smashing online presentation and an informative “About the data” section. If it all stays online for years (we can only dream of decades) it will be a useful historical resource.

But the killer is flagged in the headline to Tory Maguire’s explainer: “New polling does away with the two-party preferred results and gets behind the issues.”

The decision is cast as a high-minded attempt to improve the tone of Australian political commentary. According to Maguire, “Our readers told us in the past they did not appreciate the ‘horse race’ nature of the way we reported the results of TPP questions” — that’s two-party-preferred — “and they wanted something deeper.” Resolve boss Jim Reed, formerly of the political advisory company once known as Crosby Textor, casts the exercise as akin to the work private pollsters perform all the time for political parties. It’s “about understanding what is going on and helping [parties] decide what to do about it.”

Now it’s true that political opinion polls, outside election campaigns, are something of a blight on our democracy. When Malcolm Turnbull spoke in 2015 of the Abbott government “losing” Newspolls it was a sign that the things had become a competition in themselves. For at least a decade we’ve observed beleaguered party leaders attempting from time to time, usually unsuccessfully, to generate a Newspoll “boost” to shore up their position.

The only solution to this problem would be to do away altogether with contemporaneously published voting-intention polls. If everyone did this, the world would be a better place. But it won’t happen; people interested in and around the politics (like us) crave them.

The Guardian and its pollster Essential have moved some way in this direction, publishing voting-intention figures only in aggregated form, once every quarter. In between, they give other regular and non-regular survey results. According to Essential boss Peter Lewis, “it leaves space for us to focus on the issues and attitudes that inform votes, rather than seeing the vote as the end in itself.” Fair enough. (Not so Essential’s eccentric decision to leave undecideds in its published primary and two-party-preferred numbers.)

But publishing primary voting intentions without a two-party-preferred figure makes no sense whatsoever. Maguire writes that “years of leadership contenders using polling as a justification for knifing incumbent prime ministers led, understandably, to the perception the polling was distorting politics, not just examining it.” Indeed, but on the Labor side at least the knifers have tended to discount the two-party-preferred numbers and cite primary intended votes and personal ratings instead. “Yes, the poll says we’re ahead on the two-party-preferred, but we can’t win with that primary vote/personal rating” was the catchcry leading to Kevin Rudd’s 2010 demise, and had also been used against opposition leader Kim Beazley (by Rudd’s and Julia Gillard’s supporters) in 2006.

Nine and Resolve will still give us personal ratings; indeed, the first report highlighted Scott Morrison’s big lead over Anthony Albanese as preferred prime minister. But if there’s one thing worse than the political class obsessing over two-party-preferred poll numbers, it’s the political class obsessing over primary support and personal ratings.

Resolve’s primary votes have a problem too. Pollsters have long known that including minor parties in their initial voting-intention questions tends to overstate their support. The problem is, leaving them out — to be included in a second question for those who nominate “other” — understates them. (If I ran a polling outfit I’d do half the respondents one way — just the major parties in the initial question — and half the other way, and then combine the two.)

Resolve’s methodology — it tries to replicate the ballot paper — might be okay at election time when candidates are known, but at other times is almost designed to overstate minor-party and independent support. In the first outing, the question “Which party would you number ‘1’ on the ballot paper — Liberal/National, Labor, Greens, One Nation, Independent, Other?” (with options presumably rotated) found implausibly low primary votes for major parties. It will continue to do so unless it’s changed. This probably wouldn’t matter so much if Nine were publishing two-party-preferred figures, where these problems largely wash out. But it isn’t.

The inclusion of One Nation in the opening question is especially risky: it ran in barely a third of electorates in 2019, so mentioning it to all respondents overstates its vote even more — unless it happens to contest all 151 seats next time.

Like Essential’s Peter Lewis, Reed references the 2019 election, when all pollsters put Labor on around 51.5 per cent after preferences and voters instead delivered the Coalition that number. But being shy about two-party-preferred numbers simply points to a lack of confidence. And remember: the primary voting figures contributed about two-thirds of the 2019 error. (About a third can be put down to preference allocations that favoured Labor too much.)

Opinion polls generate excellent publicity for the pollster and good clickbait for the organ that runs them. An arrangement between the two guarantees they will always be on the front and home pages, entrails extracted, importance exaggerated. For it to be worth Resolve’s and Nine’s while, it can’t be any other way. Sure, the headline two-party-preferred figure is facile, but it’s not as facile as whatever else is headlined instead.

What will Nine’s chief political correspondent, David Crowe, write about in the next instalment, in two weeks’ time, apart from again noting the continuing low Coalition primary vote? (Labor’s is also suppressed by Resolve’s methodology, but that offsets an increase found by the other pollsters, leaving it on around the 2019 result.) An issues poll, or Labor’s improved lead on healthcare and aged care, something like that? Interesting, but will it bring in the readers?

Meanwhile, observers such as this writer will go straight to the primary votes and estimate our own two-party-preferred numbers, albeit with the handicap of starting from numbers rounded to the nearest integer.

For what it’s worth, Resolve’s first poll probably comes to a rounded Labor lead of 51–49. After preferences. •